The Insider meets up with Antoni Bohdanowicz and Włodek Orzeł, a lad and dad-in-law team involved in the Polish poster trade…

Warsaw Insider: How did it all begin?
WO: I’d always dreamed about traveling the world but just couldn’t see how I could afford to. Then, one day, I was in a poster gallery in Old Town and the owner told me how the posters he had retailed in Vienna for over double the money. So I took a loan out from my dad and made my first trip by train to Vienna with 16 posters – that was as many as I could carry. On my third trip in 1981 it was announced that the country had come under Martial Law – people thought I was mad heading back! When I returned the next time to Vienna, I was issued with visa No. 6! I loved the travel aspect. I’d sometimes hitchhike to Paris, and then come back via Berlin. I was actually there when the wall came down in 1989. It was madness, no-one knew what was going on. 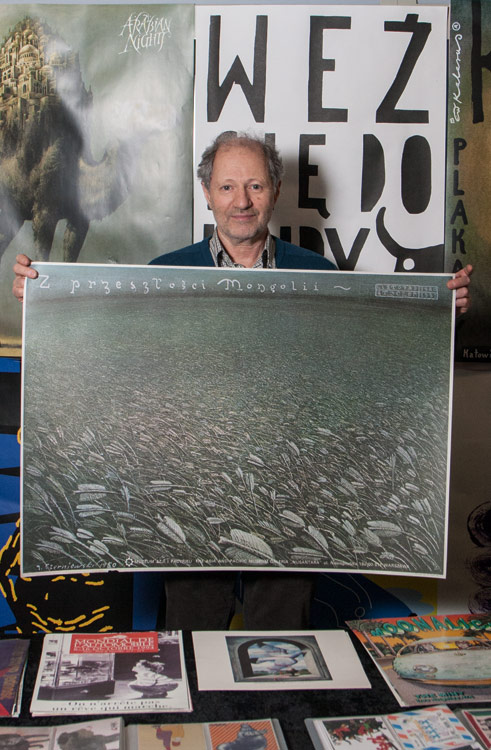 At what point did posters become your career?
WO: I quit my job in 1989 to pursue this fulltime. Before then I was a mathematician. I had studied computer technology at university and was working right next to the main government computer in communist Poland: it controlled all the energy in the country and was the size of a room! Nowadays though I don’t have a clue about computers – my daughter Dorota is the computer brain in the family.

Has your store always been in the university library building?
WO: Not at all. I used to have a gallery in that underground passageway that runs under Al. Ujazdowskie. I’d be on alert whenever Legia played just in case their fans went on the rampage! They were interesting times down in that subway – one time the actress Suzy Kendall was walking back from Łazienki Park and passed by the gallery: we had a great poster on display for her film, Up The Junction. She saw her name splashed on it so popped in and bought it! 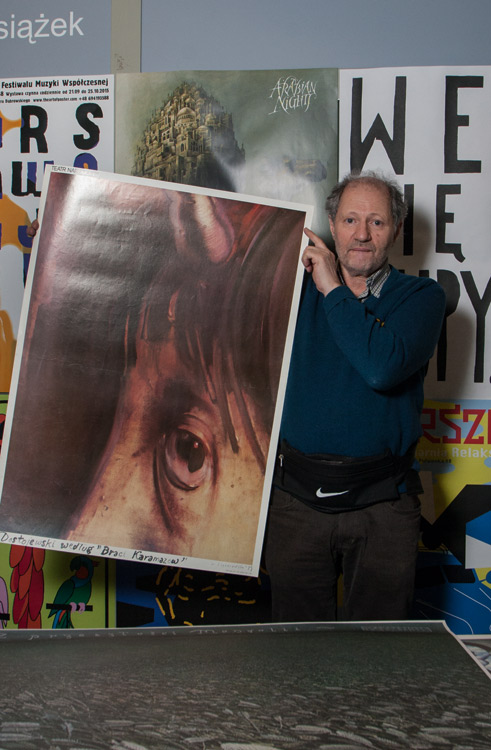 Any other memorable brushes with fame?
WO: Laura Dern was in Poland making a film with David Lynch – she got in touch looking for posters featuring her dad, the actor Bruce Dern. As it turns out, her husband is an avid collector of Polish posters so he also sent a wish list: they bought a few extra posters as well to decorate their kid’s bedroom.

What is it about Polish posters that appeals so much to people?
AB: The Polish school of posters thrived under communism. Basically the government didn’t want Western posters for Western films, instead they commissioned artists to produce their own posters. No-one controlled these artists so they really let their imagination run wild. These posters are unique, very abstract and often just bizarre. The sheer range is amazing: some posters are quite dark, others humorous, some are very graphic, while others are more arty. 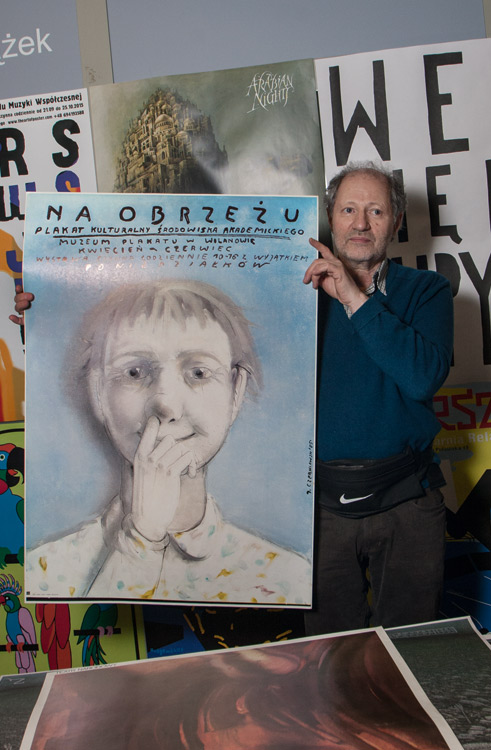 What is the current state of the Polish poster world?
AB: Everything changed in 1989 once the old system collapsed. All of a sudden the artists lost their main source of funding. But the poster industry has survived: private collectors are now the driving force, they’re keeping it alive. Unfortunately, there’s a sense that major art institutions don’t view this as an art form and don’t support this medium as much as they could. I think there’s a few people who relate poster art to Communism and let that cloud their judgement. By doing so they’re overlooking the genuine artistic merit of these works.

The collection: how many posters do you have?
AB: It’s probably the largest private collection in Poland, but it’s hard to judge. Włodek will tell you he probably has 15 to 20,000 different posters, but that number keeps changing! Because he tries to buy several copies of the same poster, in total the overall collection taken as a whole is probably something like 300,000 posters. 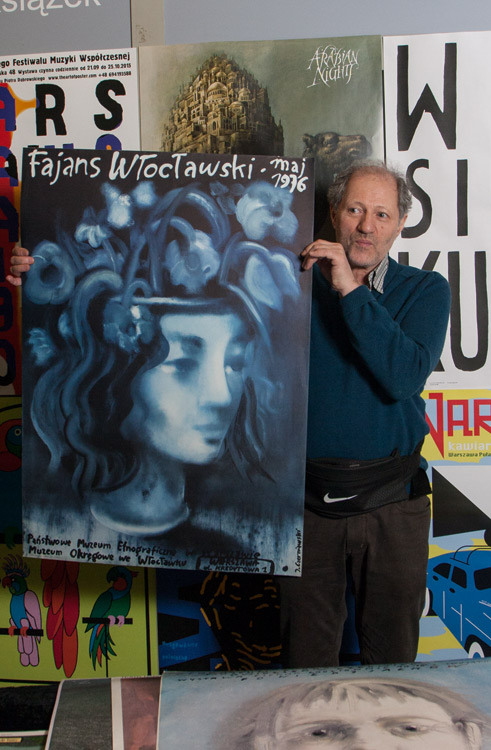 How do you value a poster?
WO: A poster is worth whatever an individual is ready to pay. One collector will see a poster and value it at zł. 3,000, but a different collector might be prepared to pay three times that. We’ve got posters here that we sell for zł. 200 that would fetch a thousand dollars in the States.

What do you look for when buying a poster?
WO: Firstly, I only trade Polish posters, I’m not interested in anything else. The name of the artist is also as important as the actual art. Of course, if someone is giving posters away for free, I’ll take them all!

People give them away?
WO: Yes! I’ll get calls from various institutions saying they’re having a clear out, do I want to take the posters they’ve found. I drove to Gdańsk and back three times over the course of a weekend to fill my car with posters that were otherwise going to be pulped. In Warsaw, Teatr Nowy called saying that their director had died and they were getting rid of all of the posters he’d kept in their archives. By the time I got there loads were already in the skip so I had to jump in and rescue them. I’d always get calls from those old communist cinemas as well: they’d say, we’re throwing away all our posters, do you fancy picking them up?

AB: Włodek used to love buying posters from Film Polski, a major production company at the time. They called him once saying: ‘hey, we’ve gone into liquidation, take our posters!’ These were top class posters by famous artists for big, big films. Having spent years buying posters from them, you can imagine Włodek’s reaction to being told the whole lot were his for free.

Which artists do you rate?
WO: Henryk Tomaszewski is regarded as the father of Polish poster art. There’s a story how, in 1948, he entered five posters into five different categories of the Vienna International Poster exhibition: he won a gold medal for all! He collaborated with other luminaries such as Jerzy Flisak and Erik Lipiński: they specialized doing film posters and I’d call them the core of the poster movement. Of course, there are many other names: my favorite is probably Jerzy Czerniawski, and he’s actually still active. Other artists to watch for include Waldemar Świerzy and Jan Młodożeniec.

How did you get into this Antoni?
AB: I’m engaged to Włodek’s daughter, Dorota. When my fiancée told me her dad collected posters I thought, oh great, I’ve got loads of the Warsaw 10s Rugby Tournament he can have. “No,” she replied, “not those kind of posters.” Anyway, since then I’ve been able to immerse myself in the world of Polish posters.

You’ve started something called Poster Guys – what’s that all about?
AB: Włodek has thousands of posters that never see light of day; they’re just sitting in storage. I figured that we could rent these out to firms and individuals. The idea is to fill up office space with interesting art that’s relevant to the industry the company is involved with. There’s so many offices with nothing on the walls, and those that do have something tend to use bad art that’s completely unsuited to the boardroom. We’re trying to change that. While the cost varies, the rental of single poster would usually cost around zł. 35 per month which
I think is a brilliant deal!