Where curry is involved my attitude is borderline fanatical, obsessive even. So to see Warsaw finally embracing Indian cuisine has left me doing star...

Where curry is involved my attitude is borderline fanatical, obsessive even. So to see Warsaw finally embracing Indian cuisine has left me doing star jumps and cartwheels. Happy? I feel like I’ve won the bingo. And even more so when I consider that places like Madras, Mr India, Tandoor and Rain are every bit as good as the places back in England – some of them even better. But where do the raft of newbies fit into that roll-call? For instance, Rasoi…

Opened at the start of the year, the standout feature of Rasoi is its location – bang center it might be, but reaching it is an odyssey: throttled by roads and underpasses, while you can see it from Zlote Tarasy, good luck getting across to it in anything less than ten minutes. Sat next to a few low-rent bars and eateries (including the incredibly named Frodo Bar), from the outside it looks shabby and pokey. Through the door, and diners are met by a compact space that’s charmingly tacky: colorful cushions and a collection of trinkets – it’s cheap but cheerful. 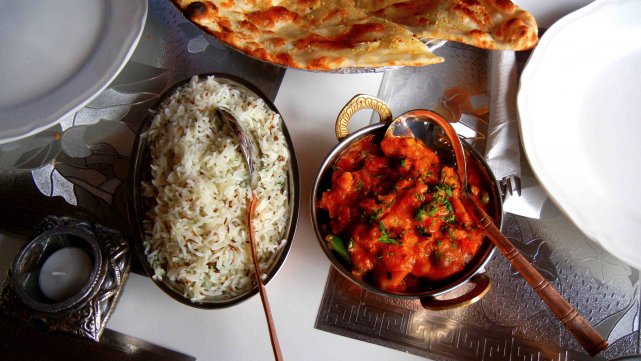 So too the food. I stress to the waitress I want a vindaloo that will make my ears bleed, and while it doesn’t hit the Richter scale, I’m pleased with the result. There’s a nice subtle punch that electrocutes my hangover into history. My friends, meanwhile, share a jalfrezi – opinion ranges from, “ok, but nothing to return for,” (him), to “wow, I think that’s my favorite in Warsaw,” (her). We don’t stick around much longer, but for me I’ve seen enough to form a judgment. And yeah, I guess it’s pretty positive. I enjoy the casual, frayed style, and the service deserves a mention – blonde girl, you’re brilliant. As for the food, I’d certainly return if the location wasn’t so isolated. Score? A healthy four out of five.

Of course, you don’t become as round as me by sticking to one curry per week. So, where else have I been? That would be Ganesh in their new location on lower Marszalkowska. When Ganesh first came to Warsaw four or five years ago I immediately installed them as my favorite in town. That didn’t last, and they plunged down the rankings in dramatic, heart-break fashion – on my last trip, for a convention of The New Warsaw Curry Club, I was surprised to find an unidentified object lurking in my curry: that guesses to its origin included a finger nail should reveal the mystery surprise wasn’t all that welcome. 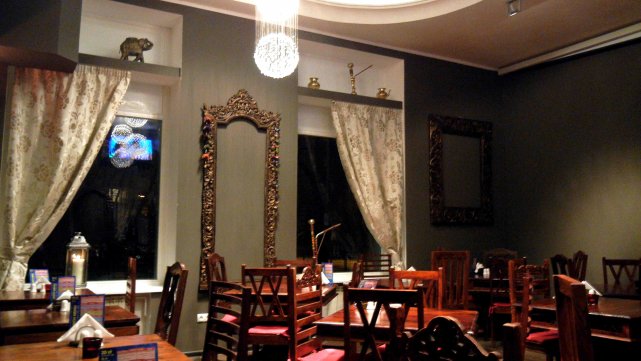 But I’m all on for giving places a second chance, so arrived to the new locale with a blank slate and an open mind. First impressions concern its size – it’s vast. The second impression concerns its lack of custom – sitting alone in an empty room and you can’t help but feel crushed by its desolation. The old venue was similarly large, but had enough nooks and corners to retain a sense of intimacy. Here you feel like you’re sitting on Death Row. 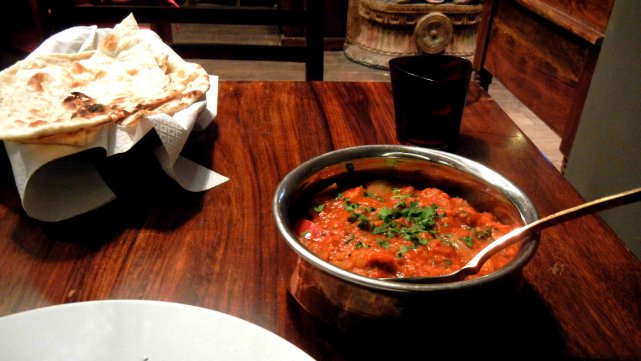 Next disappointment came with the menu – while Rain and Tandoor are great examples of former giants reinventing and rebooting themselves to offer something new, Ganesh have taken the easy option. Here the menu is a replica of what they offered before: zzz… How would I describe my chicken Madras? Well, there’s a lot they do right. The sauce is thick, pungent with spices and complete with a good kick. Very good. But the chicken part just doesn’t do it – it feels fatty and bland and this despite of the sauce it’s sat in. And the naan bread is the opposite to the pillowy bit of heaven I’d mistakenly expected – crunch, crunch, at one stage I wasn’t sure if I’d been handed a poppadum. With excellence pretty much assured at Tandoor round the corner, I wouldn’t bet on Ganesh filling those million vacant tables.