city center998 fine dining70 tasting menu42
When the time comes to write a complete written history of dining in Poland, there’s one place above all others that will warrant its...

When the time comes to write a complete written history of dining in Poland, there’s one place above all others that will warrant its own chapter. Launched in 2003 under the patronage of media mogul Jan Wejchert, for its first six years The Amber Room was one of the bedrocks upon which the Polish Roundtable Business Club flourished and grew; to this day, it continues to act as this esteemed organization’s center of gravity, the only difference being that for the last eight years the restaurant has been open to the public.

By choosing to unlock their doors, The Amber Room allowed the rest of the universe to peer inside Poland’s greatest gastronomic secret. An exaggeration? Certainly not. Having targeted perfection from the outset, the mission to create a restaurant befitting of the status of the Roundtable Business Club saw the recruitment of the best and brightest young Polish talents. It was here that chefs such as Wojciech Amaro first came to the fore, and it was here that modern Polish cuisine was first allowed to bloom. To all intents and purposes, The Amber Room came to be regarded as the official seat of the nation’s culinary revolution. 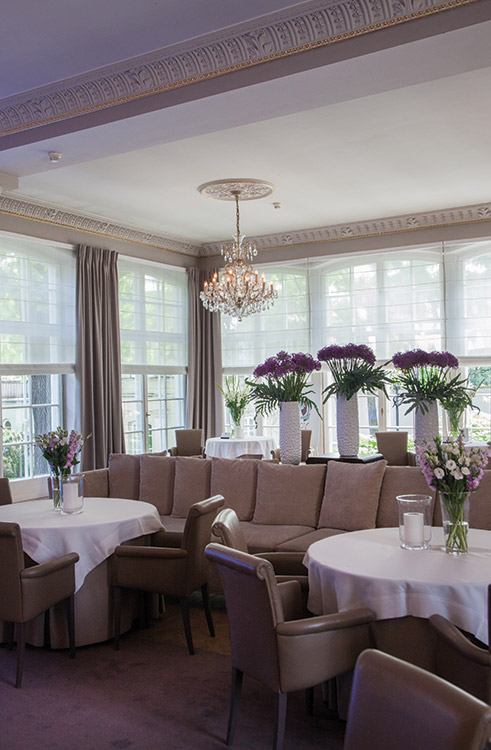 And what a venue it is. Set in the pre-war Pałac Sobańskich, this wedding white manor house is the epitome of luxury: plush, discreet, elegant and serene, it unwraps like the most beautiful of presents – a network of corridors and stairwells take guests through a series of rooms and side-chambers, many of which are off-limits to all but club members.

That’s not to say non-members get a raw deal: beautifully arranged, the restaurant is both lavishly appointed yet cultured and classy. Muted color schemes blend seamlessly with contemporary art and elaborate floral decorations; overhead, sumptuous chandeliers glimmer in the light. But the crowning glory, that’s the garden terrace overlooking the pristine lawn. To sit here in the summer is to bask in the warm waters of affluence and well-being.

Impossibly almost, the food measures up to the surrounds. Here from the very beginning, chef Robert Skubisz has become something of an ambassador for Polish culinary values with accolades including a silver medal at the 2016 IKA Culinary Olympics in Erfurt. His seasonally changing menu provides plenty of evidence as to why he is viewed as the lifeblood of The Amber Room: of the a la carte options, we begin with an immaculate tuna tartare the incorporates ginger, lime and Thai avocado. “An international course,” says the chef, “but with a Polish twist.” 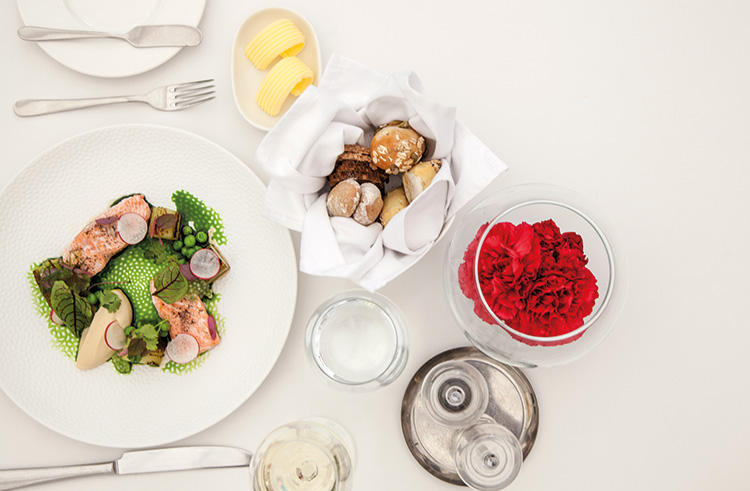 Next, deer carpaccio with blobs of chestnut puree, mustard leaves and tiny thumbnails of marinated chanterelles: it’s an explosion of color on both the palate and the plate. And then there’s the dumplings, delicate purses of soft, tender duck meat – the four forks that Michelin have awarded The Amber Room have been clearly well-earned.

For mains, the sea trout is spectacular, arriving alongside creamy root parsley and fried cubed cucumbers: light, natural and subtle, it’s in keeping with the chef’s underlying philosophy: “we never want to over-do the flavors,” he says during one of his forays to the dining room, “but at the same time, we want to create something unique, stunning and emotive.” Mission accomplished. 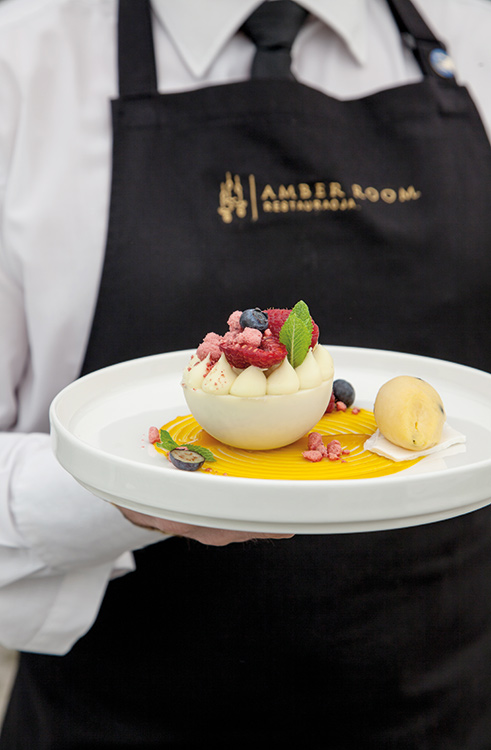 As if to highlight this point, the chia pudding that concludes the meal is nothing but a magnificent adventure: served in a sphere of white chocolate with powdery rock-like crumbles of mango and a passion fruit sorbet, it’s a standout that causes spontaneous outbreaks of collective joy.

Of course, this should come as no surprise. An established heavyweight on Poland’s epicurean circuit, time and time again The Amber Room have shown themselves fully committed to breaking boundaries, embracing modernity and moving with the times. For all that, never have Skubisz & Co. lost sight of the ultimate goal – that first and foremost it’s all about delivering a flawless product.