The Back Story Opened by a Danish-Polish couple around about 2012, the story behind Nabo (Neighbor in Danish) is, in many ways, something you’ve...

From Nabo to Naboku, a Sadyba legend rebrands and returns to the big time!

The Back Story
Opened by a Danish-Polish couple around about 2012, the story behind Nabo (Neighbor in Danish) is, in many ways, something you’ve probably heard before: husband & wife leave the corporate rat race to pursue their dream of running the kind of little place they’d hang about in themselves. So far, so normal.

What happened next was a little more unexpected. Cast out in the far reaches of Sadyba, what had been intended as a niche operation grabbed the city by the horns. First came recognition from this humble publication, then top prize at Gazeta Wyborcza’s Knajpa Roku awards. 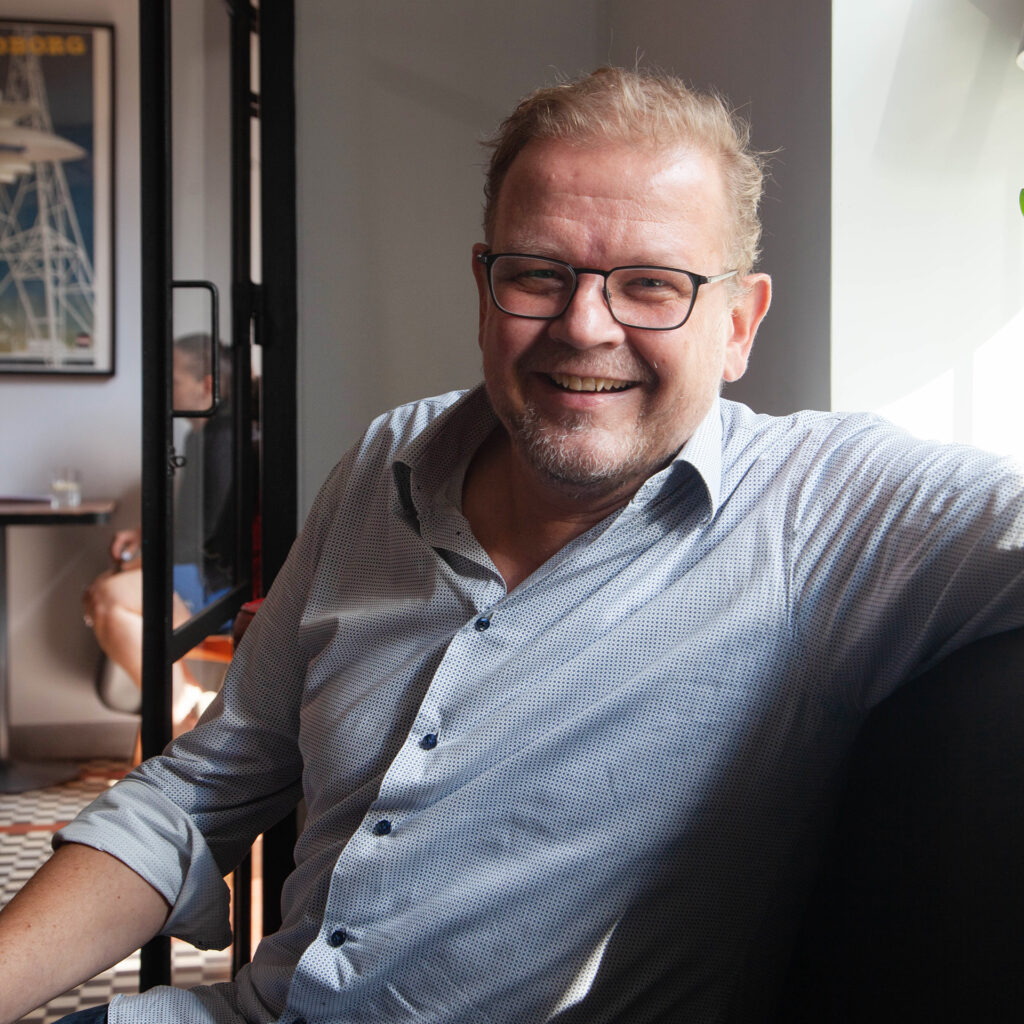 “Honestly speaking,” says Steffen, co-creator of Nabo, “that wasn’t something we ever expected.” At a stroke, the award(s) plunged Nabo into the spotlight, bringing with them all the pros, cons, pressures and attention usually associated with some kind of mega bucks win on the lotto.

“Our business plan never anticipated such a thing happening,” confesses the Dane, “but all of a sudden we were getting huge crowds of people turning up demanding some kind of grand restaurant experience – but that was never what we had in mind.”

So what exactly was Nabo about? Committed to a family forward philosophy, it was simply meant as a comfortable meeting and eating venue. A place where once could sip coffee, grab breakfast, enjoy dinner or stop after work for a drink. “Like Cheers in the TV sitcom,” wrote the Insider’s reviewer at the time, “only Scandinavian in style.” 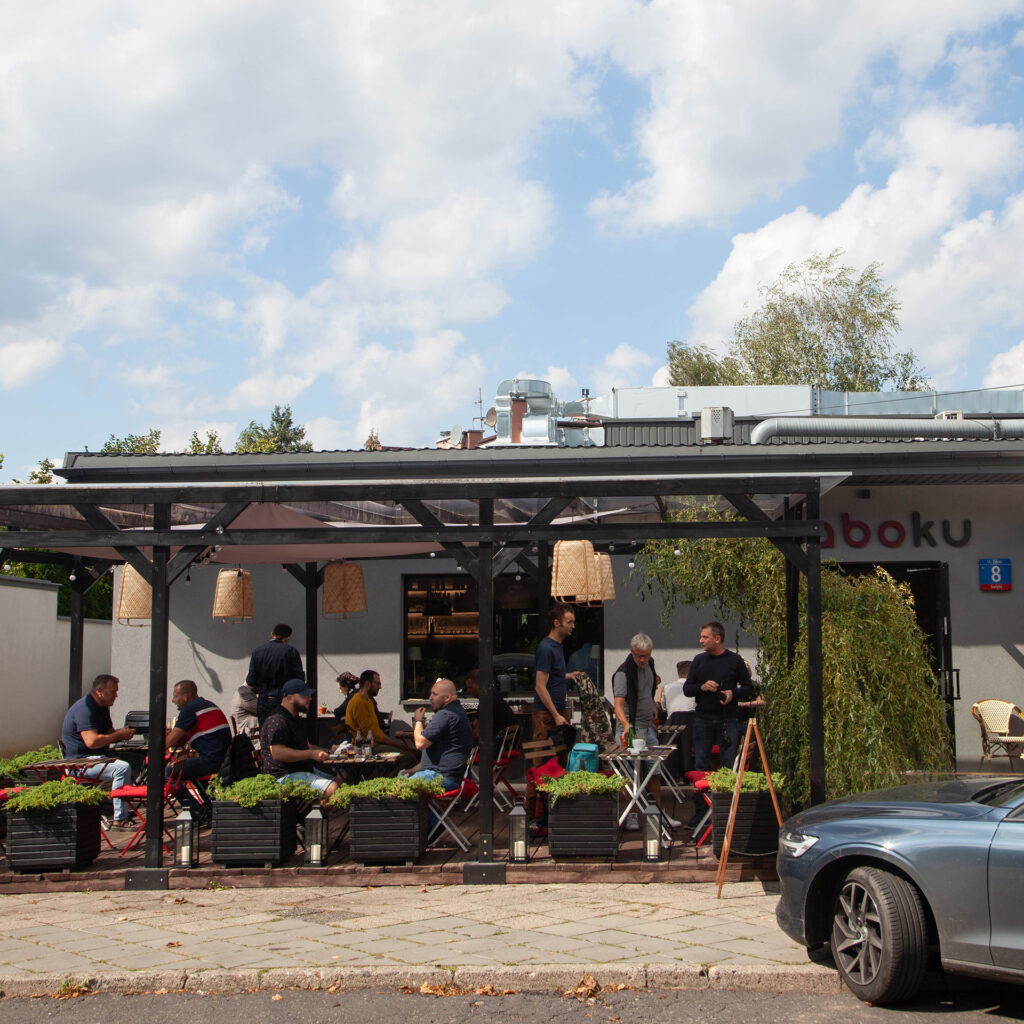 And it’s on this point we should linger. If Nordic cuisine is now known the world over, back in those years it was recognized only by the staunchest of local foodies. Pre-dating Warsaw’s food revolution by about three milliseconds, Nabo acted as a precursor to what was to come by focusing on food that was simple, natural but beautifully composed.

A showcase of the whole farm-to-fork philosophy that would later sweep the city, they were among the first crop of venues to repackage the concept of casual dining and take it into fresh, new directions. The awards that followed were well-earned indeed.

What’s Changed
Much, yet simultaneously not much at all. After a good innings as Nabo, this summer saw a move of sorts and a subtle rebranding of what had come before. 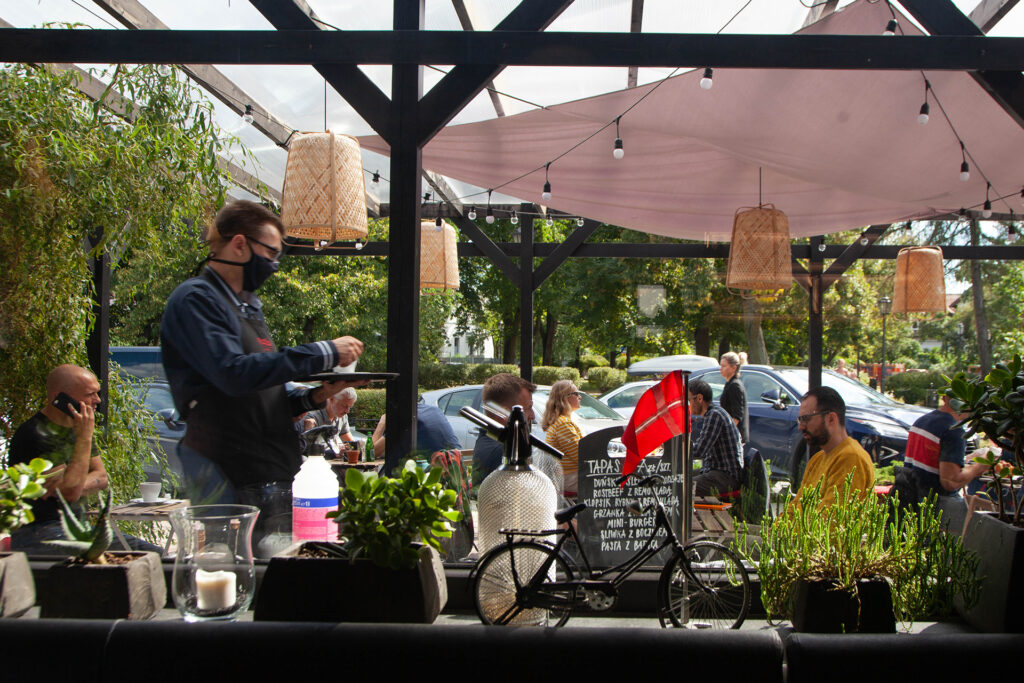 Shifting twenty meters to a slightly smaller neighboring unit in the same pavilion, Naboku (a Polish play on words meaning ‘to the side’) has retained much of the former’s spirit: entering via a sun drenched wooden-decked terrace, a rattly steel door clatters open to reveal a space that feels likeable in an instant: geometric tiled floors rescued from the PRL age, framed retro posters, super cool lighting and little bits and pieces such as a decorative miniature bike and tiny Danish flags. 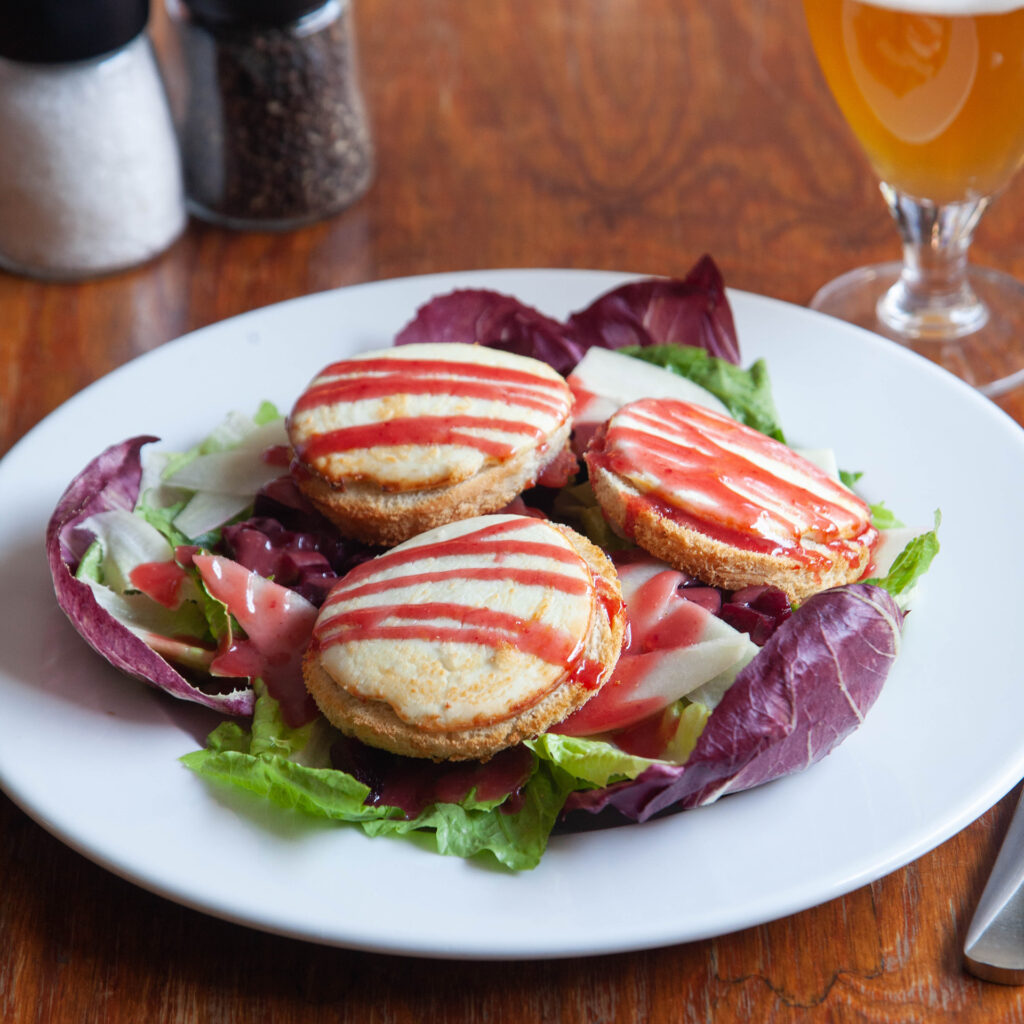 Despite that, you don’t need to be Danish to feel immediately at home. Entirely more conspicuous has been the shift away from being overtly kid-friendly. Sure, you can still bring the munchkins, just now it all feels a little more mature. “Our own kids grew up,” grins Steffen, “so we felt it was time for Naboku to grow up as well.”

Food & Drink
Smørrebrød – open-faced sandwiches – were the specialty and they remain just that. For the uninitiated, they’re worth the trip alone. 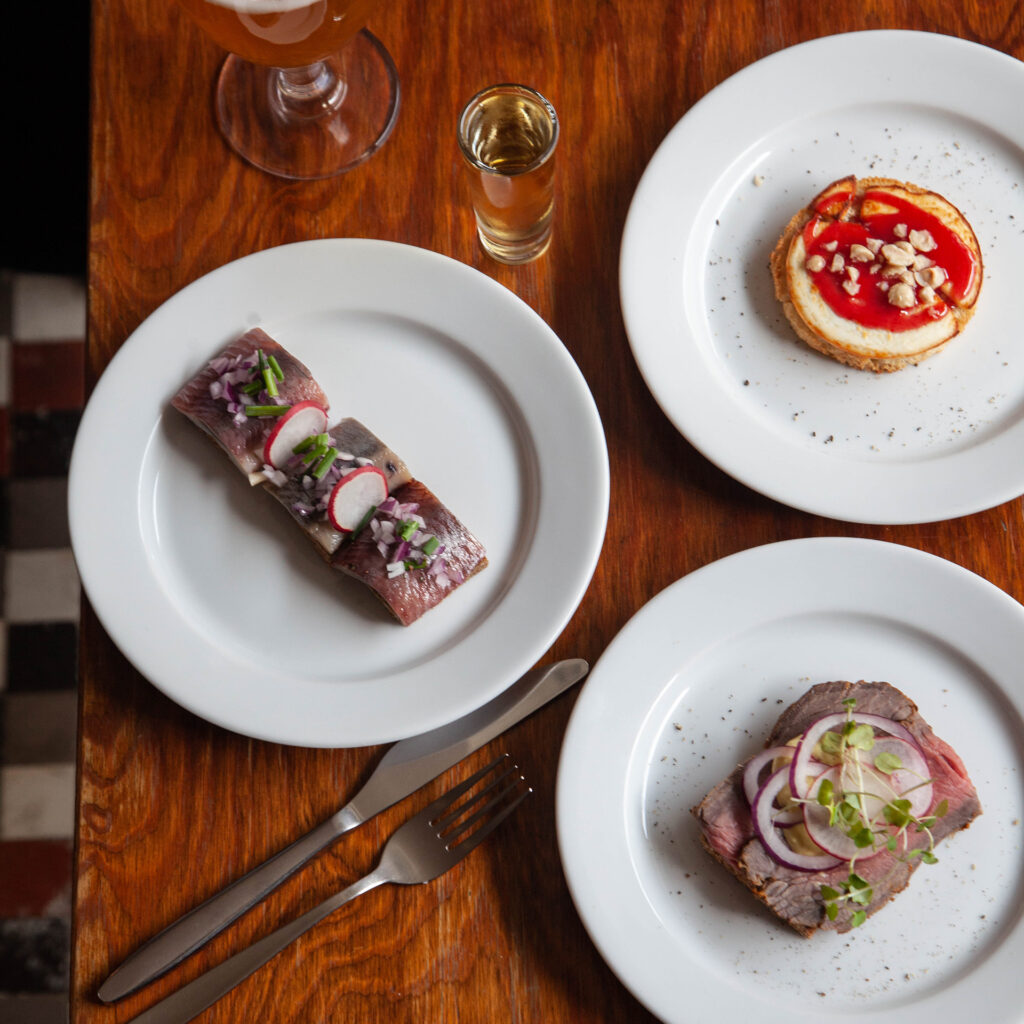 They sound basic (and yeah, they are) but it’s perhaps because of their simplicity that you notice just how much love has been invested into the ingredients that comprise them: pinkish roast beef with fried onions and remoulade sauce; curls of Bornholm herring with potato and beetroot salad; delicate, crispy fishcakes; and goat’s cheese salad with indulgent ribbons of raspberry sauce. More, more, bring me more. 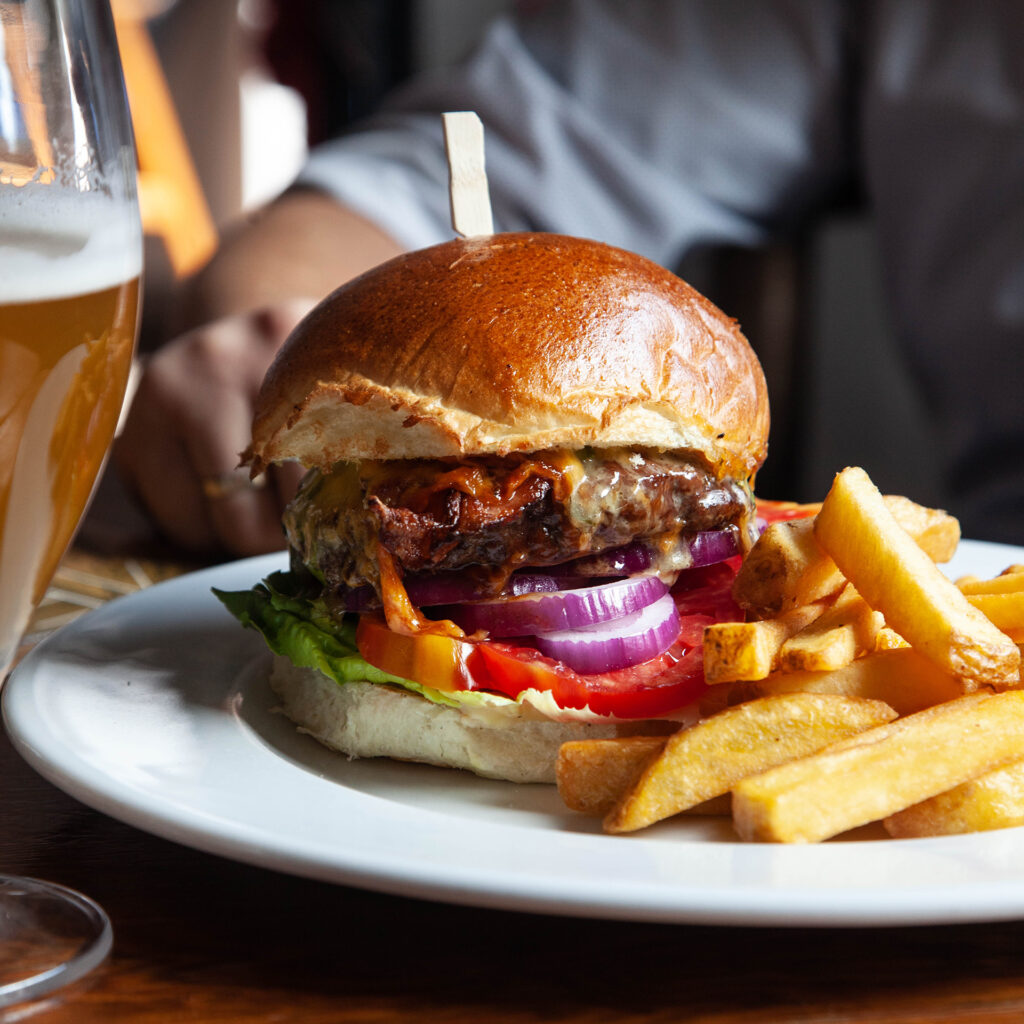 And speaking of more, yes there certainly is: when it comes to the substantial offerings, visit for a towering burger involving true, proper bacon; ribeye steaks; or fish stew pimped up with chili, chives and garlic; and don’t think for a moment that drinks have been ignored. To Øl and Mikkeller remain on the frontline of craft innovation, and you’ll find brews by both represented in abundance. 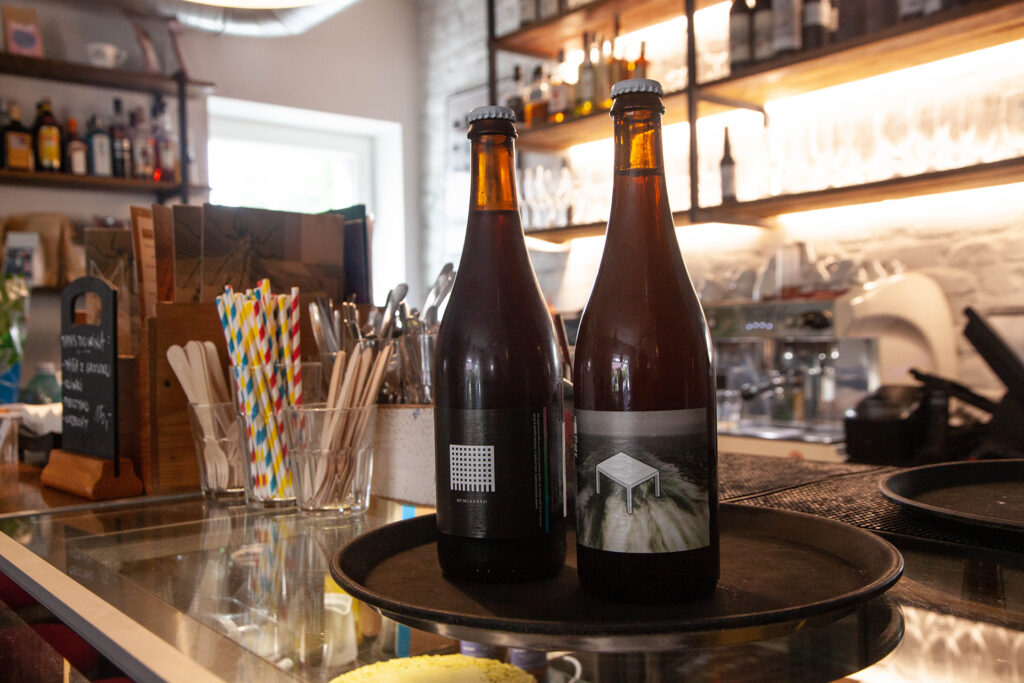 The Final Word
In this little pocket of Denmark, a good mood prevails throughout and just by being here, you gain a little understanding why the Danes are often cited as the happiest people alive. And why the hell not. If this is the food they eat, the drinks they drink and the kind of atmosphere they’re accustomed to, then you’d be pleased as well. Herein, lies a bloody important point: Naboku isn’t about the food and Naboku isn’t about the drink. It’s about feeling fantastic and loving the moment.