Much ink has been spilled where the Warsaw Uprising is concerned, and to this day debate rages as to the rationale behind it. The Insider listens to two people who lived – and fought – through it.
By  Iza Depczyk

Having suffered five years of brutal Nazi occupation, and with liberation in sight, Poland’s clandestine military movement, the AK Home Army, launched its bid to free occupied Warsaw and install an independent government ahead of the Soviet arrival. Having received the green light from the Polish leadership in London, the ill-equipped AK sprang into battle on 1 August, 1944. What followed was a savage 63 day struggle, one defined as much by barbarity as it was by bravery. With Allied aid only token in nature, the Uprising was eventually crushed. The human cost was enormous, with over 250,000 lives lost. On Hitler’s orders, what remained of the city was systematically destroyed. By the time Soviet forces entered Warsaw, total destruction stood at 84%, with 20 million cubic meters of rubble burying what had once been one of Europe’s great cities.

With the number of survivors shrinking each year, the Insider is privileged to have the opportunity to catch up with two. Wiesław Depczyk was 18 at the time of the Warsaw Uprising. Codenamed Drohojemski III, he fought for the AK Home Army alongside two of his brothers – one of whom lost his life. His wife, Irena Dmochowska-Depczyk, was ten at the time, and lived in the town of Piastowo just outside of Warsaw. This is the story of their Uprising: 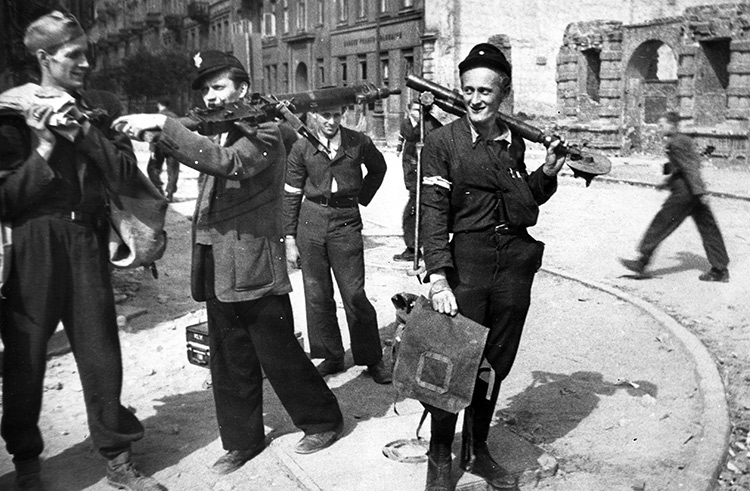 Pictured: Tadeusz Depczyk, twenty-two at the time of the Uprising, died from shrapnel wounds three days after this picture was taken.

Tell us about the first day of the Uprising.

Irena Dmochowska-Depczyk: The day of the Uprising was very tense. I was in a town near Warsaw at the time, and although it was planned in secret, we all knew what was going to happen.

Wiesław Depczyk: The youngsters in Warsaw were very highly-strung because they knew what was coming, and that many of them were to take part in it. Even if the Polish government in London hadn’t given the signal to launch an Uprising, the youth would have fought anyway. They were tired of Nazi oppression, they wanted to rebel. You could sense that longing for revenge and freedom.

A few days before it all started, there was what we call the Ostre Pogotowie. It was the day when we thought the Uprising would take place. So we all had to show up to our posts and wait for the sign from London. My brothers and I met our fellow AK soldiers from the district on Złota. There, in a building where our meet-up was, we picked up our arms which we had hidden in chimneys, or under the floorboards. After a few hours of waiting, the Ostre Pogotowie was moved to 1 August.

WD: That was difficult, as you can imagine, because we weren’t proper soldiers. We weren’t even properly armed, our weapons were whatever we had received from the Allies, found or even bought from the Germans. Anyway, on 1 August I was at home, on Żelazna 65, when the messenger boy came over. I’m still friends with him to this day, he was thirteen at the time. The message boys had to be young, because the Germans didn’t normally stop kids. So he came over around noon and said that we had to go over to our AK base on Złota straight away.

We went outside, and all I could sense was excitement. For the first time in ages the streets were crowded. This wasn’t normal in those days, because usually if there was a group of three or so people the Nazis would stop them, sometimes even arrest them. So to see hundreds of young men and women on the streets, it was quite something. You know, the Germans were confused, they didn’t know what was going on. I mean, they probably had their suspicions, but they didn’t know the extent of our plans.

Well, I got to the base on Złota and my brothers were there already, along with the other AK from our district. As we were preparing our weapons the commander came in and told us that we are about to go: the first shots had been fired.

WD: Scared? I wasn’t even thinking about whether I was scared or not. All I knew is we had been waiting for this day. And now it had come, and we had to fight. I remember hoping that that the Gestapo wouldn’t catch us before we got that chance. We had to walk to Centralny, because the plan was to first take over the station. So we walked, through tunnels burrowed between basements. We came out on Chmielna and walked towards Marszałkowska and then the railway station. And at one point I remember my friend asked me whether I was scared. “There’s no time,” I replied. I think, back then, I couldn’t tell the difference between the absolute excitement that we felt that Warsaw was on the verge of freedom, and the fear of what might happen to us.

IDD: All I knew was that boys and girls in Warsaw were fighting for our freedom. We were proud of them. People were hanging Polish flags in their windows. I think everyone thought that this was going to be a success. Of course, the end was different. I remember those who didn’t die in the Uprising, but who were arrested, were marched through our village. My mother and I were looking on as they were cuffed, walking behind a German marked van. I remember my mother grabbing one of the men, and telling him to pretend he was with us. Fortunately, nobody noticed.

How did you join the AK?

My brother had contacts within the AK, so he pulled me into it two years before the Uprising. He was part of it for longer than I was. I remember I had to make vows to stay loyal to it. They had to be sure that you weren’t a Nazi infiltrator. This distrust was very common under occupation: you had your friends, but you never really knew what his political views were, so you only trusted a few people. That’s why none of us, in our AK battalions, knew each other’s real names – we only went by aliases so we wouldn’t reveal proper names under torture.

Which battalion were you in?

WD: Our district was Śródmieście and our battalion was called AK Gurt.

IDD: Gurt was the alias of their commander.

WD: That’s right. Our base was on the corner of Złota and Jana Pawła II. These days an obelisk marks the spot.

How do you live in a city with such memories? Do you ever find yourself walking the streets and thinking, ‘this is where that happened’?

IDD: Very rarely. Warsaw looked very different then. The buildings look nothing like they do now. Our family house on Żelazna actually survived, and was still here a few years back, but we didn’t dare go back after the Uprising. We had to flee because the Russian UB and NKVD were already looking for those who had taken part. Also, my father had been a police officer in the interwar period, and the Soviets, as you know, were getting rid of all the police officers, generals and anyone who might oppose them. So everything stayed in the house, all of our belongings. I moved out of Warsaw, to Radość, along with my mother, father, and the brother who survived the Uprising.

WD: My mum opened a little restaurant in our house; we made our own bimber (moonshine) and sold it to the locals and that’s how we got by. I guess someone must have told the militia that we had fought in the Uprising, because one day we received a document from the UB demanding we come up with a list of names, aliases, addresses, anything, about all the commanders in the Uprising, otherwise the whole family would be arrested. We weren’t going to betray our friends so my brother and I fled again, this time to Cieplice, with the rest of the family joining a few days later.

But after several years we returned to Warsaw. That’s where we were from, that’s where our friends were. I got a job as a cartographer at PKPG, and they’d sometimes keep us locked up in an office for two days painting these Communist propaganda posters. You can imagine how I hated that job sometimes. Finally, after two years, they fired me because I wouldn’t join the Party. Later I got another job, drawing plans and maps, which is where I met my wife.

In hindsight, was Warsaw right to rebel?

IDD: Looking back over time, knowing what happened afterwards, knowing how many people died, and how Warsaw got destroyed, I think most of us would say that the Uprising shouldn’t have taken place. Back then though, it was inevitable. People were tired of oppression.

WD: But even though so many died, nobody wanted to hear about giving up, putting up the white flag. But how do I see this now? So many have asked this question already. Those of us who took part in the Uprising have always said that the Uprising was absolutely necessary, but had we known that it was going to last so long, that Warsaw wouldn’t be liberated, or that we’d get so little support from the UK and US… Had we known all that, then I would say no, let’s get out of  Warsaw, let’s not fight.