While Akashia is the nearest restaurant to my flat, it’s been a while since I was last there – and on Saturday, I was reminded why.

I had remembered this place as somewhat soulless, a boring basement of blond wood and anonymous style. So how surprised was I to discover it’s had a complete reinvention.

Out has gone the formulaic interior, replaced instead by a raw industrial style that’s all breeze blocks, plywood and Godzilla graffiti. There’s indie rock blasting out over the speakers, and even the staff look the part – you speculate they’ve been ordered to dress up like cool Japanese kids. 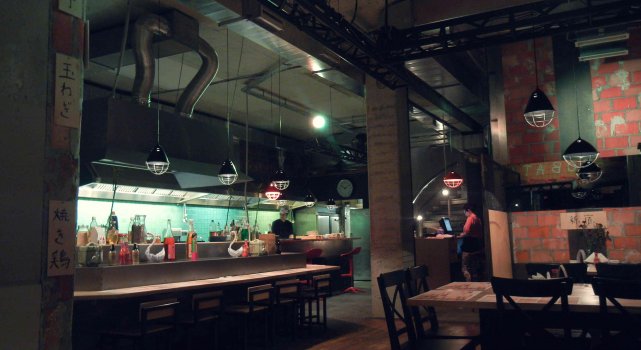 The aesthetic is unexpected but fresh and innovative compared to other restaurants of its type. If only the same could be said of the sushi. Maybe that’s a little unfair, but I for one am unimpressed by the sushi set and its small slithers of fish.

Rebranded in February as Robata by Akashia, part of the reboot has included a number of new items on the menu, among them the mango rolls – salmon, mango, avocado and cucumber. I’m a sucker for anything with mango, and this combo sounds a match made in heaven. Yet it is strangely tasteless, and I pick through it questioning how such an intriguing dish can be so unstimulating.

The same goes for the rest of the meal – even the wasabi appears to lack its usual punch. Strangely, my favorite part of the evening is actually the kimchi salad: strange in that I haven’t actually ordered this, instead it’s appeared as a complimentary extra. But this too lacks the usual perky spices I associate with this side.

Perhaps the kindest thing I can think to say of Akashia is that it is moderate in price – my sushi set (five nigiri, six maki and two futo maki) is zł. 35. The mango rolls, six of them, are zł. 20. But this just reaffirms the much-repeated axiom that there is no such thing as good, cheap sushi.