With Valentine’s Day upon us, the Insider finds 14 ideas for both that special day and beyond…   For… something classic Under a crisp...

With Valentine’s Day upon us, the Insider finds 14 ideas for both that special day and beyond…

Under a crisp powdering of snow, elegant Łazienki Park is the seminal winter stroll. But it is a fool that forgets ul. Agrykola that cuts down her side: fringed by 19th century gas lamps, walk down in the evening when halos of light form like beacons around these streetlights. 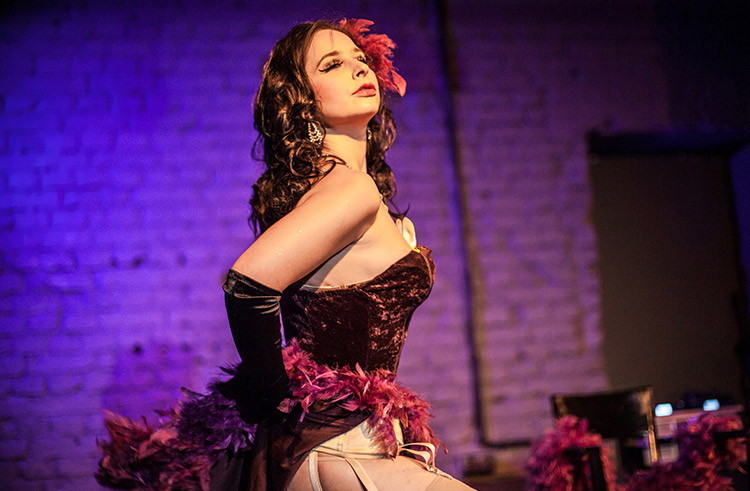 It’s hard to remember the last venue that was able to offer such a diverse program of events as Worek Kości (fb.com/worekkosci). Under the hollow gaze of hundreds of skulls (“About 400,” speculates the owner), guests kick back inside a dark, shadowy bar that seems to summon the spirit of H.P Lovecraft. Blurring the line between the theatrical and macabre, it’s fitting that this venue has become the premier spot for a taste of the burlesque: visit on the 15th to watch Master B. Boylesque and his troupe of alternative artistes. On Valentine’s night itself, join Zuzanna Federowicz as she entertains on the harp and cello. Admission for both events is free, though you’re advised to book a table way in advance.

For… back row Romeos

Cinemas have long been regarded as refuges for the romantic, so it’s heartbreaking to learn that, by in large, Warsaw prefers to watch Transformers and Star Wars down the local mall. Both Kino Luna and Ilujzon are likely to offer something a bit more cerebral though neither had announced their plans at press time. Kino Muranów, a slightly, creepy Lynch-esque-looking leftover from PRL times will be showing The Big Sick, a rom-com that premiered at Sundance last year to widespread acclaim. A little more leftfield, U-Jazdowski Kino will be playing The Disaster Artist and The Room.

Act out that ‘Knight In Shining Armor’ fantasy of yours by saving your partner from lunatics and zombies: marketed as an ‘interactive museum of fear’, the Horror House (fb.com/horrorhouse.warszawa) is a terrifying trip inside your biggest fears – visit, for there’s nothing more romantic than sharing a bloody good scare!

For… something Further Afield

Whether you class it as a stream, drainage ditch or a canal, it’s hard to think of a more romantic one in the whole of, well, Wilanów. While Potok Służewiecki doesn’t look like much, it gets Cupid’s endorsement on account of Most Zakochanych, a Lilliputian bridge that finds itself enveloped by a series of giant hearts that light up at night. Having made the 12-meter crossing, take an evening stroll around the Royal Garden of Light outside the nearby Wilanów Palace – it’s an experience that’s both surrealistic and enchanting. 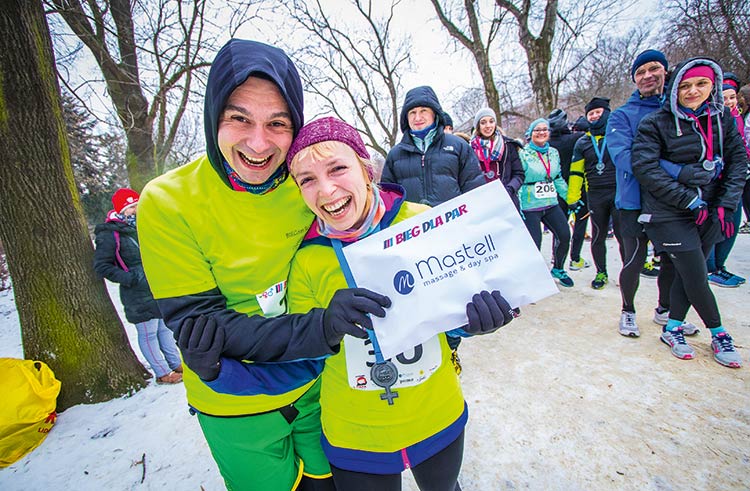 For… some huff & puff

There are some who associate Valentine’s with physical activity (no, not that kind). Join hundreds of other couples for the fourth edition of Bieg Dla Par in Park Skaryszewski on Feb 11th. For registration info and further details, check their Polish-language website at: biegdlapar.pl

Him and her are advised to join forces before stepping inside Mo61 (mo61.com), a fancypants ‘perfume laboratory’ in which couples are guided by staff trained by Zygmunt Marczewski (a.k.a ‘Poland’s top nose’!) as they concoct their own bespoke perfume inside a timeless pre-war space.

Forget stuffy, old restaurants packed with once-a-year diners, instead book yourself onto one of the gazillion cooking classes that have kept couples in mind. Cook-Up Studio (fb.com/CookUpStudio) will be offering a week of ‘Valentine’s classes’ with the focus shifting daily on different cuisines, while the Whirlpool Academy (fb.com/AkademiaKulinarnaWhirlpool) will be opening on the 14th for a super special ‘Valentine’s For Two’. Though the official language of instruction stands to be Polish, both should have English-speakers on hand should you require.

So we’ve already covered this elsewhere in the mag, but if you want to go native this Valentine’s then head thee to Most Świętokrzyski: it’s here that you’ll find hundreds of dopey love locks clinging like limpets to the railings. Go on… be wreckless!

For… a photo to treasure

It’s probably a sign of the times that Warsaw’s best-known heart isn’t Chopin’s pickled ticker (encased inside a jar of cognac set within a column in the Church of the Holy Cross), but rather the glowing neon found on Pl. Europejski. Since making its debut the Kocham Warszawę sign has become as much of a landmark as the Warsaw Spire that towers above it. A selfie stood in front of the heart-shaped ‘O’ is on its way to becoming a local Valentine’s custom. 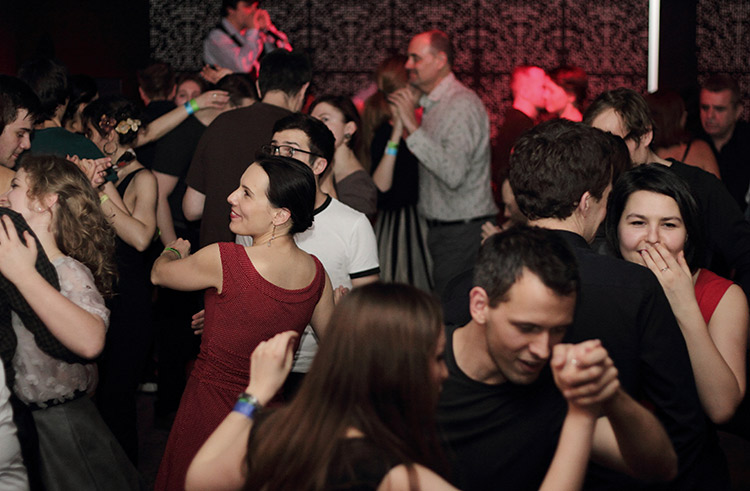 The Valentine’s Blues never felt better – running from Feb 9th to 11th, join other blues dancers for a series of workshops lasting from four to twelve hours. Organized by the largest swing dancing studio in the city, coordinators have promised “workshops during the day, followed by concerts and parties at night.”further info, see: valentinesblues.pl

For a date on ice there’s nothing that beats the Old Town Square. Gliding around the ice as snow tumbles down feels like one of those rare moments of magic that forges memories forever. Retreat afterwards to the pseudo shelter offered by the wooden cabins vending mulled wine.

Whip yourself into a sexy South American sizzle by joining a tango class. There’s oodles to pick from, though Caminito (caminito.pl) and Złota Milonga (milonga.pl) are often regarded as ‘the best of the best’. Both are likely to organize something memorable for the big night in question. 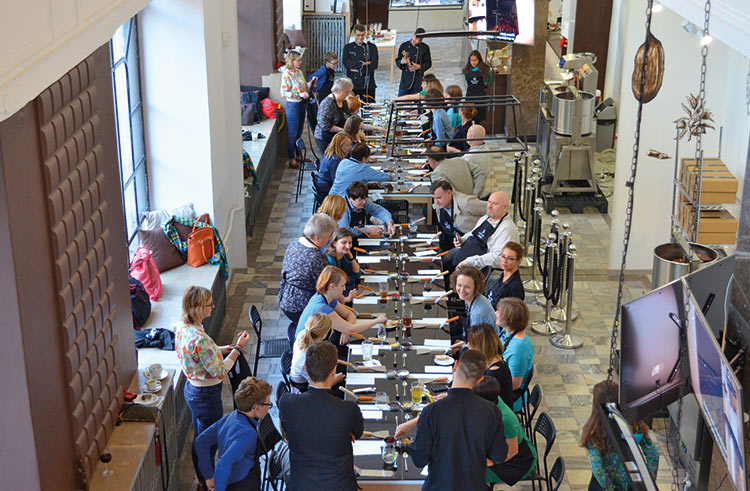 Substantially shorter, and cheaper, than any of the cookery classes on offer, enlist for one of the chocolate-making workshops at Manufaktura Czekolady (manufakturaczekolady.pl). There’s two classes to note: one aimed at singletons on Feb 13th, and one for couples the following day. Both last 90 minutes and are priced at zł. 50 per head.