city center1007 football16 murals7 praga113 street art31 ursynow13
Long before Robert Lewandowski and the era of megabucks modern football, one player dominated the Polish game to an extent that resounds to this...

Coinciding with the 31st anniversary of his death, we look back at the life and legend of Poland's greatest ever footballer: Kazimierz Deyna.

Long before Robert Lewandowski and the era of megabucks modern football, one player dominated the Polish game to an extent that resounds to this day. Regarded as the nation’s first ever global celebrity sportsman, Kazimierz Deyna ranked alongside the best and in the process orchestrated the nation’s rise to football’s top table in the 1970s. “Even God,” remarked Pele once, “would not be able to improve him as a footballer.”

Born on October 23rd, 1947 in the northern town of Starograd Gdański, Deyna began his footballing career with his hometown club before joining ŁKS Łódź in 1966. With his raw talent already visible to all, Legia Warszawa – then under the auspices of the army – were able to poach him from under the noses of ŁKS after just one match, and it was there, at the capital’s most successful club, that he would become a legend in the truest sense.

Mentored by Czech coach Jaroslav Vejvoda, by 1969 he had won his first domestic league and cup double, a feat that was repeated the following season. In all, he bagged 141 goals over a 12-season period with the Łazienkowska club – not bad at all for a player that originally thought his future lay as a ping pong player. 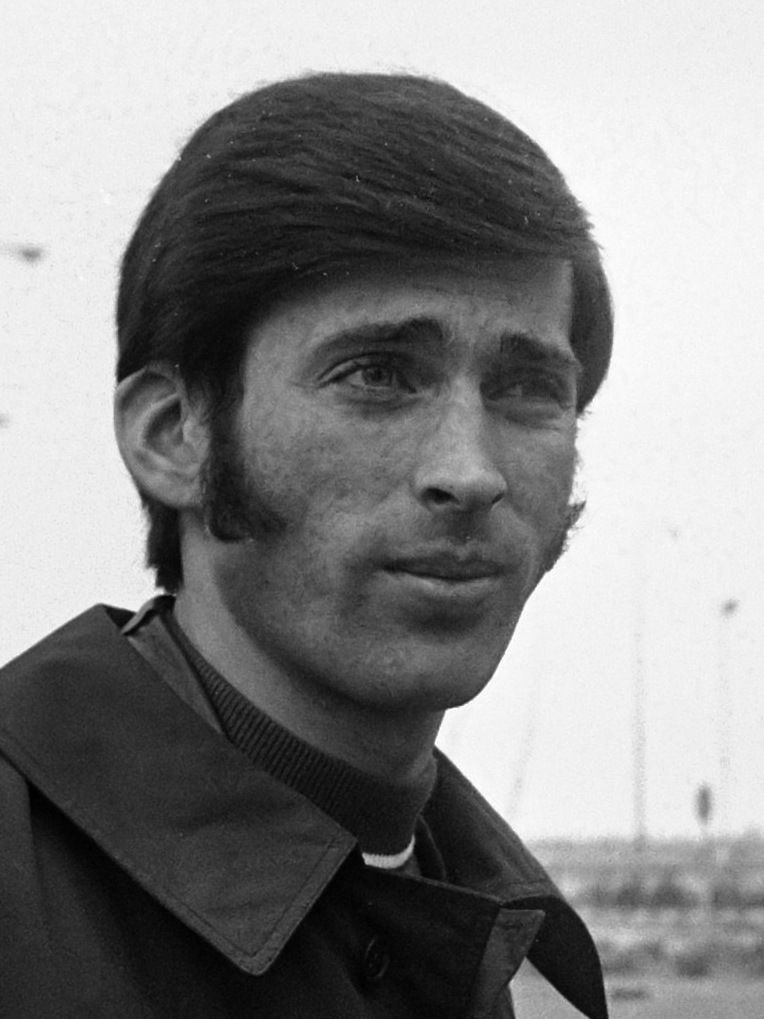 A firm fan favorite at Legia it was, however, his international impact that is remembered across the globe. Capped 97 times by Poland, he finished as top scorer at the 1972 Olympics before being part of the team that qualified for the 1974 World Cup having famously kept England to a draw at Wembley. Tipped as outsiders, the Poles became the talk of the tournament after recording a blistering start that involved a historic triumph over Argentina, a 7-0 mauling of Haiti and a magical victory over Italy – against these pre-tournament favorites, Deyna’s goal was struck with such venom that it’s claimed he later had to swap boots.

Known as the ‘water battle of Frankfurt’, Poland’s next match, the semi-final, saw them go chin-to-chin with hosts West Germany on a swamp-like pitch that was barely playable after a summer deluge. Edged out by the team that would go on to win the tournament, the Poles salvaged pride by going on to beat Brazil in the third-place playoff.

Regarded as something of a talisman, Deyna was the shining star in a golden period for Polish football, and his outrageous performances on the pitch were matched by an enigmatic but playboy lifestyle off it. Living first on ul. Puławska, and later at ul. Świętokrzyska 32, he was a frequent visitor to trendy hangouts such as Adria and Roxana, not to mention the bar in the Hotel Europejski, and it’s said that the fur-wearing playmaker would often spend great lengths of time preening his hair in the mirror ensuring it was perfect. 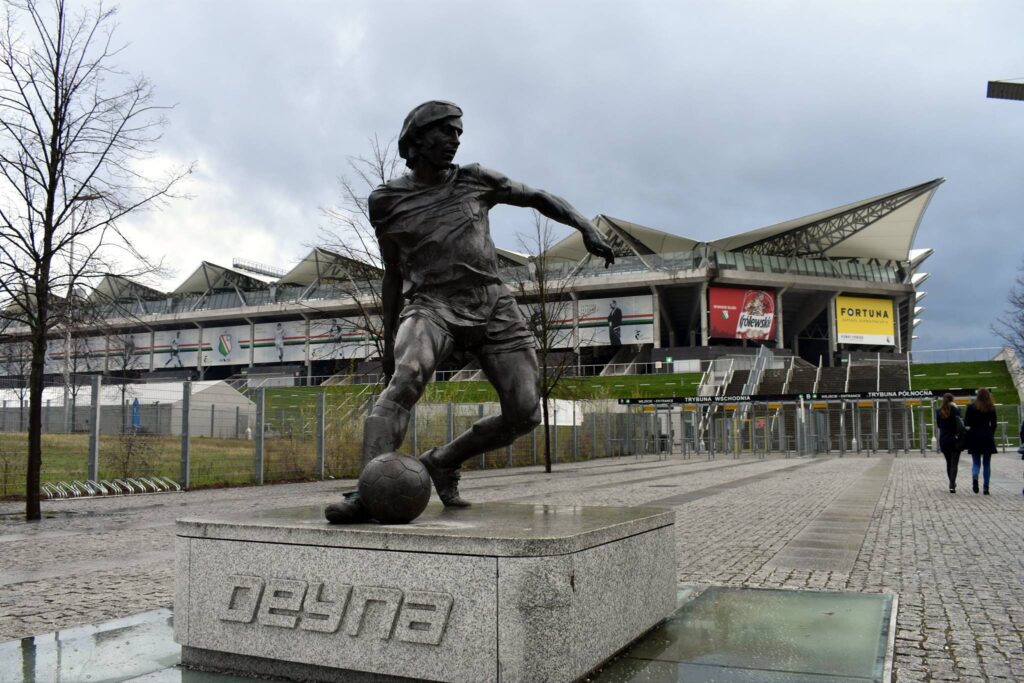 His soaring international reputation meant no shortage of foreign suitors, either. Real Madrid were linked with him as were Bayern Munich. Counting Prince Rainier among his fans, AS Monaco also kept close tabs on his progress on the urging of the monarch. But in what represented one of the great sporting injustices of Communism, players under the age of 30 were blocked from transferring abroad until the age of 30, a law that ultimately thwarted the western world from seeing the peak of Deyna’s powers.

Eventually, a move was sealed in 1978 to Manchester City for what was then a staggering fee of one-hundred thousand pounds. The move, it was rumoured, was sweetened by the promise of a pile of Adidas equipment as well as a horde of electrical equipment. Becoming only the second Eastern European to play in England, Kazik endeared himself to the Maine Road faithful by contributing seven goals in the last eight games of the run-in to rescue his team from the ignominy of relegation.

Established as a cult hero, his fame grew yet further when he was cast alongside the likes of Michael Caine, Sylvester Stallone, Bobby Moore and Pele in the film Escape To Victory.

By this time, though, he had become a fringe player at City despite the adoration he continued to enjoy from the fans. When the San Diego Sockers came calling it was an easy decision to emigrate to the States, not least due to the financial pressures he found himself under.

Five prolific seasons followed during which time he netted five championships on the bounce, but his final years of life were marred by increasing money troubles, fallouts with his advisors (who were strongly suspected of misappropriating his earnings) and a drinking habit.

Already convicted of driving under the influence on three prior occasions, Deyna was killed on September 1st, 1989, after crashing his car at speed into a parked truck. Found in his body was a blood-alcohol level of 0.20%, and in his boot, twenty-two footballs. 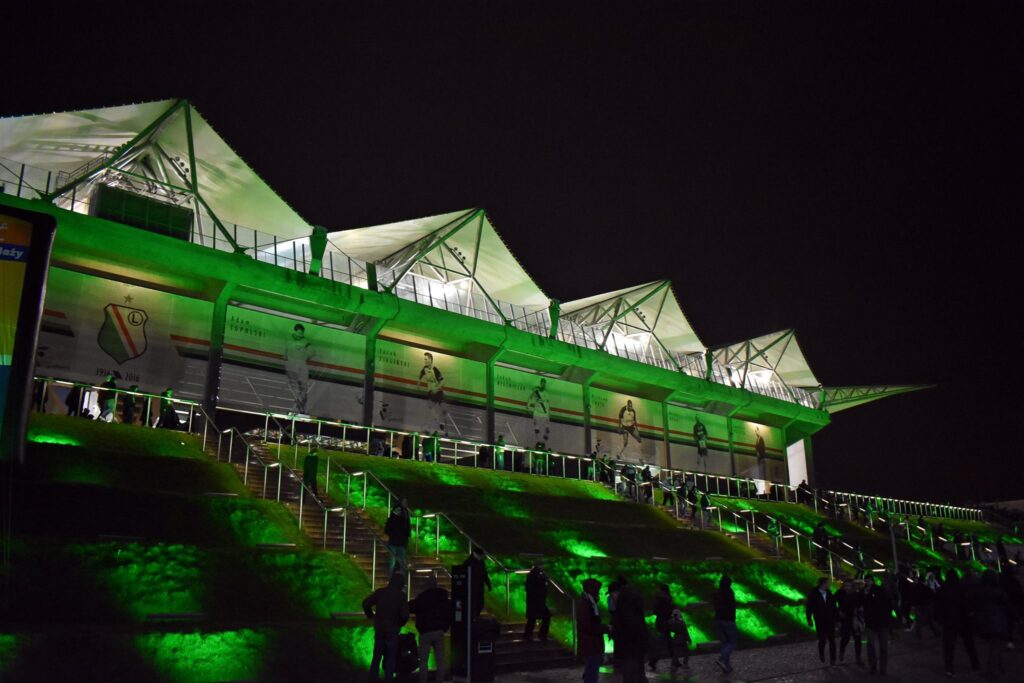 Deyna’s Warsaw
Deyna’s virtuoso ability and his tragic, premature death have combined to ensconce him into folklore. At his spiritual home, Legia’s Łazienkowska stadium, no big match is complete without banners bearing his face being waved from the hardcore in the Żyleta stand. But besides this latent reminder, Kazik’s legacy lives on it sites across the city.

Powązki Cemetery
Having originally been buried in San Diego, an urn containing Kazik’s ashes was flown back to Poland in 2012 and interred at Powązki’s Military Cemetery at a ceremony held on June 6th. Attended by former teammates and hundreds of fans, his return to Warsaw was made possible after Legia followers raised the required funds.

Legia Stadium
On the same day that Deyna’s ashes were buried in Warsaw, a two-meter bronze sculpture was unveiled a stone’s throw from the entrance to the Żyleta, the home of Legia’s most vociferous fans.

Legia Museum
Idolized to this day as the club’s greatest ever player, it makes sense that a generous section of Legia Warszawa’s museum is dedicated to Deyna. Featuring memorabilia such as shirts, pennants, boots and personal items, it’s a touching tribute to Legia’s favorite son.

And In Praga
Originally revealed in 2015, the cheery Deyna statue that stands outside the Offside bar on Brzeska street was nearly lost forever after workers renovating the area chucked it on the scrapheap. Saved by members of the AKS Zły football team, and subsequently stored in Offside, the monument was restored to its rightful place late last year.

Mural
The sight of Deyna’s face on the walls of Warsaw is by no means uncommon, but it is the latest mural that stands to conquer all. Designed by Bakcyl Studio, the 420 sq/m project can be seen in its full glory on ul. Kazury 16. 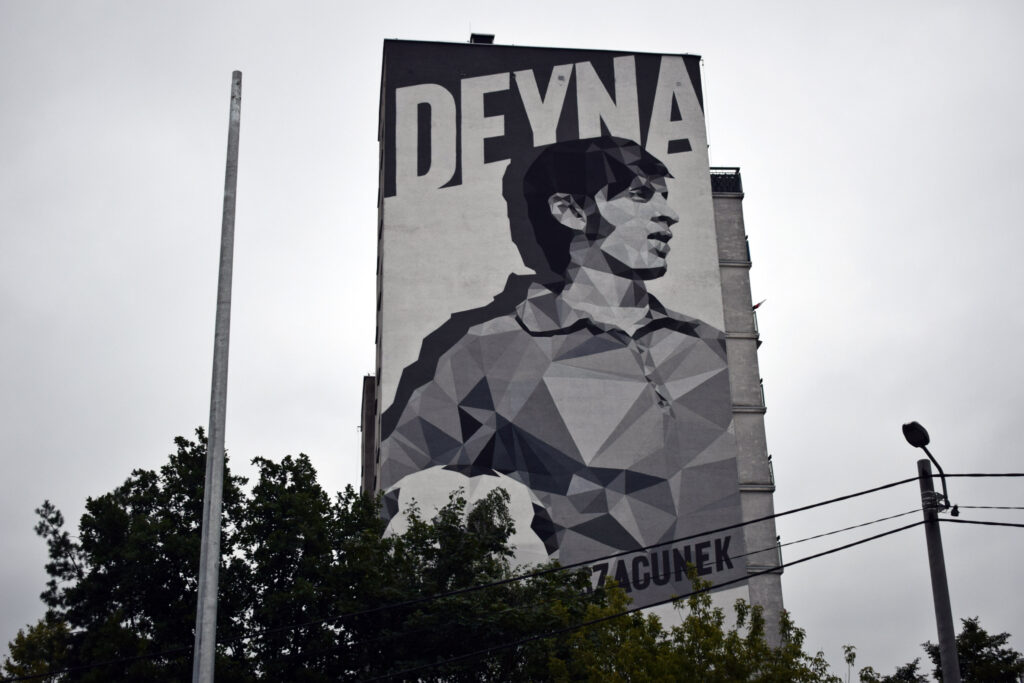 Off The Wall
The Insider speaks to Bartek Podlewski, co-founder of Bakcyl Studio about the Deyna project…

WI: How excited were you to be involved in celebrating Warsaw’s biggest sporting icon?
BP: Everything about the project was ‘great’, including the subject – he was a brilliant footballer and a legendary character. The only thing we had little of was time, but fortunately everything went to plan and was delivered on schedule.

Were there any specific challenges you faced with creating this mural?
The biggest challenge was to prepare a good project. Our idea wanted to show Deyna as the king of the ball. Most illustrations that commemorate athletes show them “in action” but we wanted to emphasize the majesty of Deyna as well as his dignity whilst also showing the respect with which fans hold him. I think we got it right. Another challenge was to create a project that would not dominate the area and would not overwhelm the surroundings. That’s why we decided on a monochrome design that would also emphasize Deyna’s timelessness. Thanks to this, the design was fits well with the surroundings.

Is there a reason for a Deyna mural in Ursynów – to our knowledge he never had a specific association with the district!?
Every place in Poland is good for Deyna – after all, he’s a national treasure and the greatest Polish footballer of the 20th century. Ursynów also has a large base of Legia fans so Deyna is adored here.

And like Deyna, the mural’s is truly one-of-a-kind…
It’s the first large-scale ecological mural in Warsaw. To paint it, we used a special anti-smog paint that filters the air from harmful substances. This is especially important given the location 200 meters away from a bypass that will open shortly. We wanted to draw attention to the ecological aspect of our work and we hope that becomes a trend when it comes to murals in general.