Bielańska Street: I’d given up ever seeing this piece of Warsaw resurrected. For years – six decades or so – this plot stood as a derelict war wreck. But after a snowfall of magic money beans it’s been transformed – the award-winning Senator office building has risen and now, inside it, what could yet become an award-winning restaurant: Senses. I was there last night, though for the full S.P you’re going to have to wait until our June issue to read about my exploits. In the meantime, a few preludes to whet the appetite…

The Place: just entering it is a thrill – through a long, dark open-air corridor. Flickering flames dance either side, the tall walls disappearing into the sky above. You feel, almost, like you’re approaching Scaramanga’s secret lair. It’s a sensation that lingers a little longer, for at the door I’m greeted by one of those tall, Slavic Bond girls that leave you feeling clammy.

But in spite of outside appearances, Senses is neither dark nor sinister. The layout is surprisingly open, and there’s a stretch of glass flooring below which lie pre-war relics recovered from the construction phase. The rest of the place has the quiet elegant air associated with muted luxury. Less is more, etc. 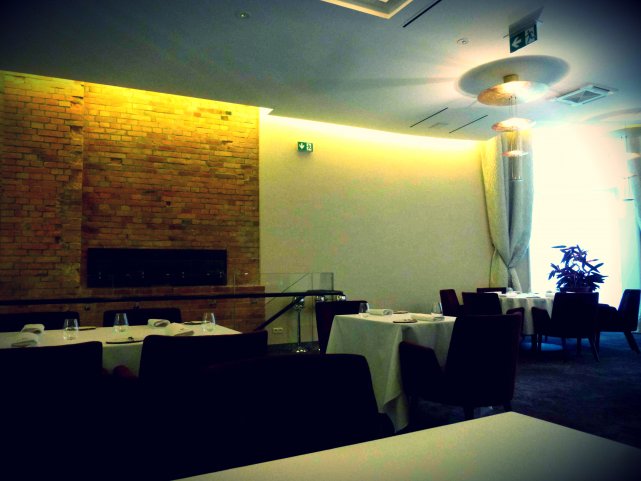 The Chef: Andrea Camastra, an Italian who has worked in a catalogue of top kitchens: La Mirabelle (Belgium), Le Chateaubriand (France) and Warsaw’s own Atelier Amaro. His philosophy is based on creating a personal connection with the food, and as the name of the restaurant suggests, utilizing all the senses. If ever there was a perfectionist, then it is Camastra. “Even the weather influences what’s on the menu,” confides the manager afterwards, “so as you can imagine we were making lots of changes last week – several per day, at one stage.” 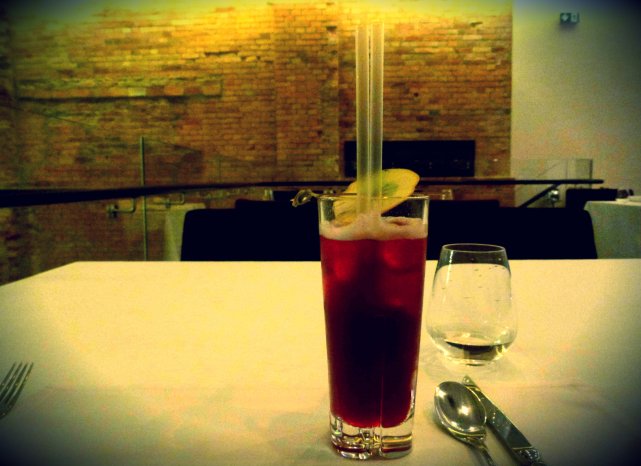 The Drinks: doctor’s orders mean I’m still on this no alcohol malarkey, so zero wine news to report. For teetotalers like myself, however, the barman turns his hand to some bespoke non-alcoholic solutions ad-libbed to suit your tastes. Created using a Perlini shaker that carbonates the drinks, I’m treated to hibiscus, pineapple, apple, rhubarb and mint.

The Meal: there is a la carte, but on the prompting of the maître d’ I choose the six course degustation menu (zł. 230). “It’s what I recommend to first timers,” he says, “it gives you a sense of what our chef is about.” 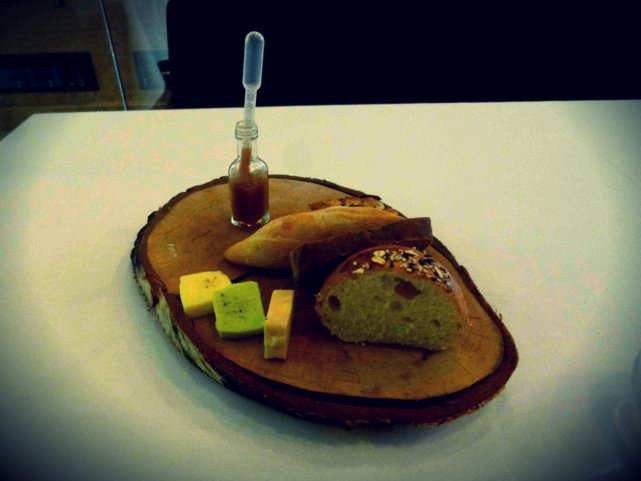 It begins with bread, four types, the highlight being the brioche, best enjoyed with a squirt of apple essence from a teat pipette.

Next, an amuse bouche that involves a cabbage croquette, pork skin and ribbon of potato.

Things begin in earnest with eel, smoked at the table, served in a velvety liquid of onion and celeriac. It’s bliss, though in my excitement to wolf it down I forget to take a picture. There’ll be a next time. 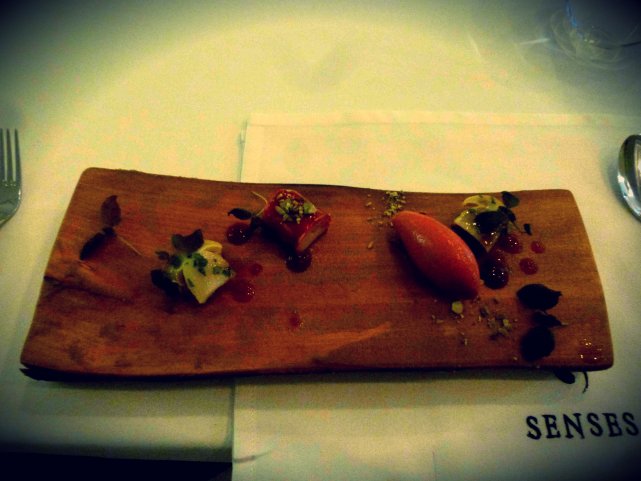 Then there’s foie gras, served on a slab of tree with a cranberry sorbet, boletus and pumpkin seed. I am dining alone, yet there is a big smile on my face. They must think I’m weird. 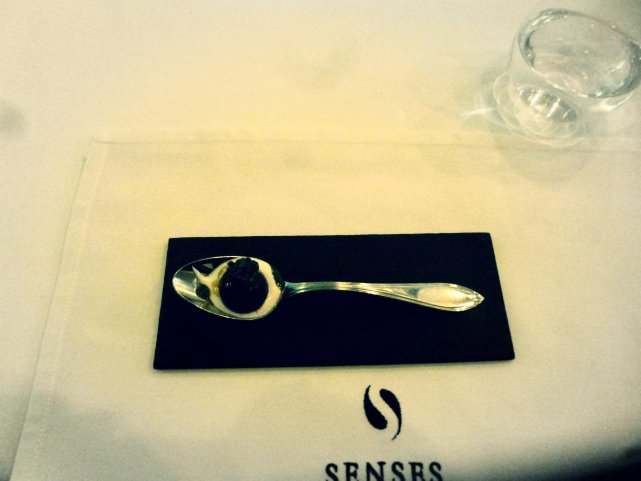 A palette cleanser turns up, a glorious mix of iced beetroot crowned with caviar. 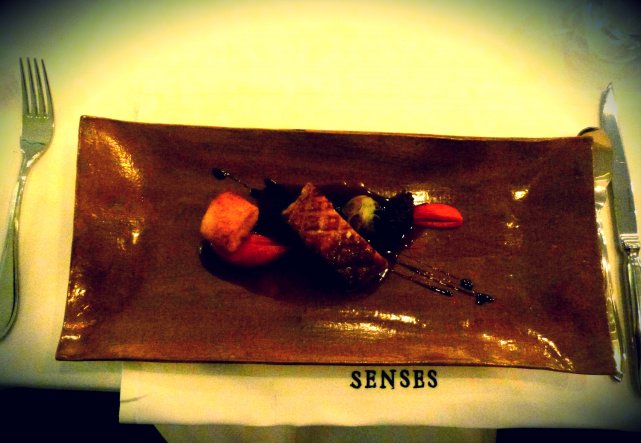 Polish sea trout, sorrel, barley and a sprinkle of caviar arrive next. Decent, but this is one course that doesn’t leave me thrilled. In my mitigation, I’m not that much of a sea baby. Amends are made by what follows, a slither of duck with onion chutney and pepper mousse. Everything about this dish – the tastes, textures, temperatures, even the colors – sends me into raptures. 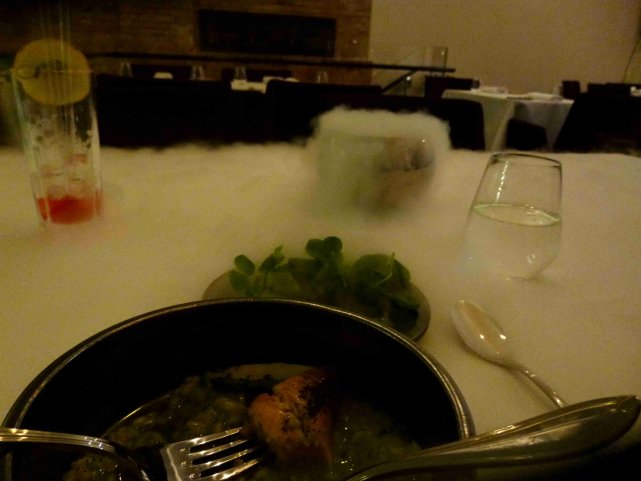 Though that pales compared to my reaction to the swordfish. I said I’m not a sea baby, right? I take it back. It’s exceptional, and served with a side of asparagus and leek finished with squid ink. From out of nowhere Andrea emerges. “Essence of the sea,” he announces, before leaving a container filled with rocks from his home region of Puglia. Thick ocean mist billows over the table, enveloping it in a fine, fresh fog. Heaven. 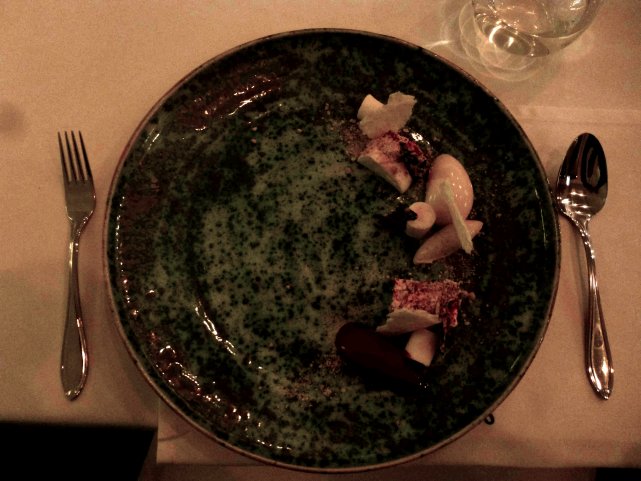 Dessert involves cherry and mirabelle sorbet, yogurt parfait and wafers made using coffee and poppy seed. Again, I give the dishwasher an easy job by clearing it all. What I don’t do, is give the laundry guy a break. Below is what happens when I go fine dining (and explains, incidentally, why my food is pictured atop of a napkin)… Oops. 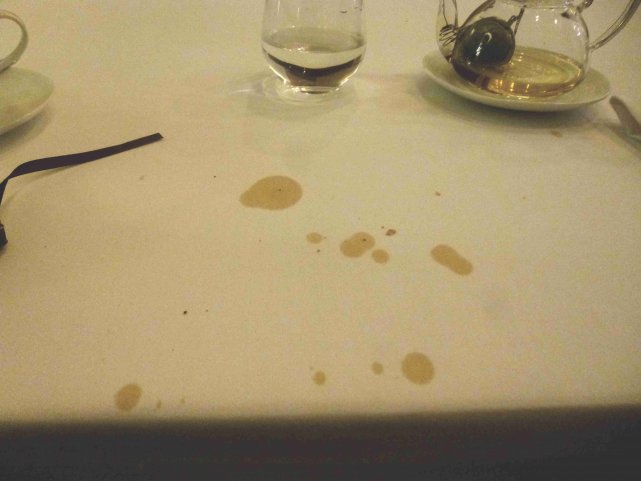 The Verdict: inevitably Senses is going to draw comparisons to Atelier Amaro. But these can’t and should not be made – really, hypnotize yourself to forget that restaurant beginning with ‘A’. This venue is unique in its own right and should be afforded space to breathe before being anchored with the pressure of being compared to Poland’s best restaurant. Already something special, given time I think it will develop even more. These are exciting days for Warsaw.