Six Of The Best: After-Work Drinks!

bar299 cocktail bar12 craft beer152 drinks333 going out6 nightlife289
Returning to work has had its pluses: namely, being able to hit the bar right after you finish! With no further ado, we bring...

Returning to work has had its pluses: namely, being able to hit the bar right after you finish! With no further ado, we bring you the places you’ll find us in the weeks right ahead… 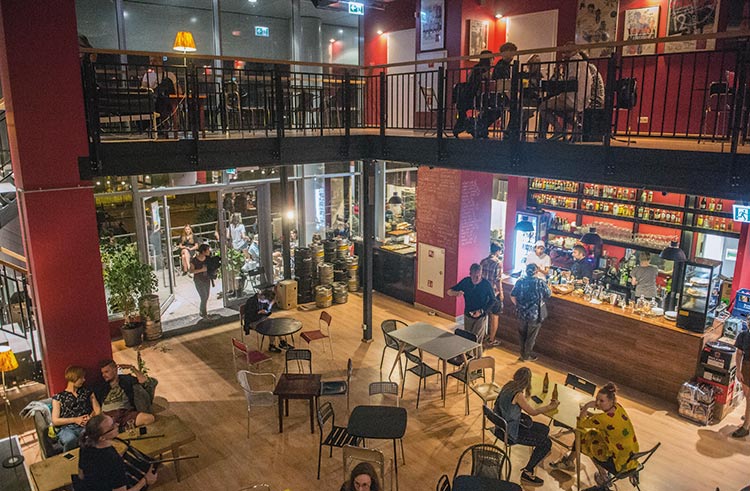 Pardon To Tu
Al. Armii Ludowej 14
If the old PTT looked rebel and renegade and a little scruffy around the seams, then the new version (opened last year) is definitely more sanitized: squelchy, scuzzy toilets? No chance. Set inside a corner unit of the PWC office building, it’s a place that feels well-armed for the requirements of modern Warsaw. And there’s the size: woah! In terms of footprint, it’s not all that much larger, but the sense of scale is distorted by a ceiling that reaches to the heavens – for prime viewing, use the spiral stairs to gain a bird’s eye perspective from the mezzanine level. 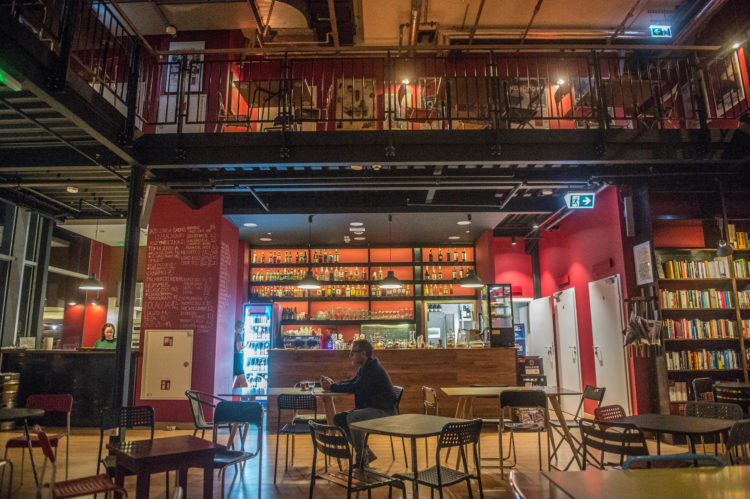 Famed for its mega weird music policy (check the wall of glory name-checking their favorite bands and musicians) and home-baked focaccia, other features to celebrate include edgy Polish beers in the fridge, generous outdoor seating as well as the underlying air of unforced cool. There’s no airs or graces here, what you get is a mixed crowd that covers all backgrounds and nationalities – that everyone gets along is a tribute to the atmosphere created by Daniel and Magda at the helm of operations.

Koko & Roy
ul. Wilcza 43
Quite when it happened it’s impossible to say, but somewhere along the line Koko & Roy have blossomed into one of the Insider’s favorite evenings. With its quirky-cool design (Princess Leah on the wall, Antony Bourdain in the toilet), no-bullsh*t multinational crowd and maverick playlist, at weekends it’s the kind of place you hit pre-club before deciding to drop the club bit altogether. And in the event that things are slow, you can rely on the owners to grab the evening by the horns and lead you down a murky rabbit hole involving off-the-cuff cocktails and offbeat conversation. Before you know it, by God, is it really nearly four? 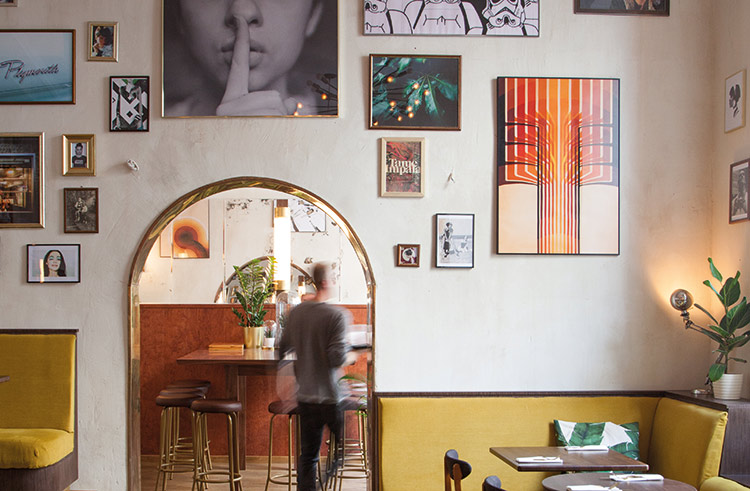 But there is more; significantly calmer during the week, drop in for carefully composed drinks and craft beers from the epic Stu Mostow brewery and a menu that showcases a more sophisticated side to the American palette. Offering a stretch of street-side terracing and a warm, familiar welcome, few places are more conducive when it comes to that sacred after-work chillout pint.

Cuda Na Kiju
ul. Nowy Świat 6/12
Set in the former Communist Party HQ, find Warsaw’s first legitimate multitap bar slotted inside a glass prism hidden amid the solid, socialist era arcades. Drenched in sunlight that comes slanting through the glass walls, queue inside to order from the 15 taps firing out beers from various European craft breweries, before heading out to enjoy a humongous terrace dotted with deckchairs and tables. 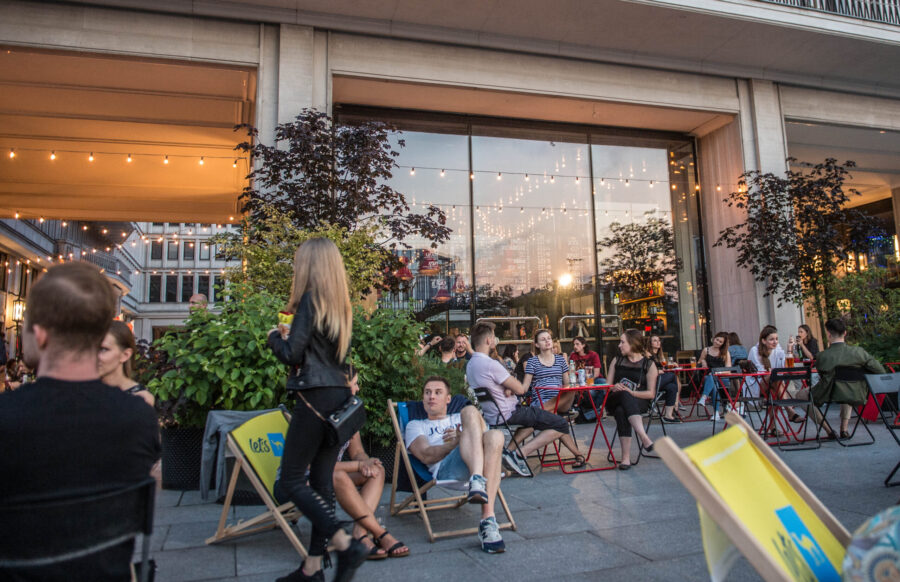 Watching the sunset while looking out towards the city’s iconic palm tree installations is a pure Warsaw moment. For those averse to the sun, find outdoor seating extending well beyond and into the echoing, shaded courtyard of this immense, impressive building.

Loreta
ul. Widok 9 (Puro Hotel)
With the city’s rooftops spread below, and its towers glinting in the sunset, there aren’t many places the Insider prefers to be this summer than on the roof of the Puro cradling a cocktail in its paws. This is the setting of Loreta, a bar that channels the spirit of this design-led hotel brand through its funky décor and eclectic art. 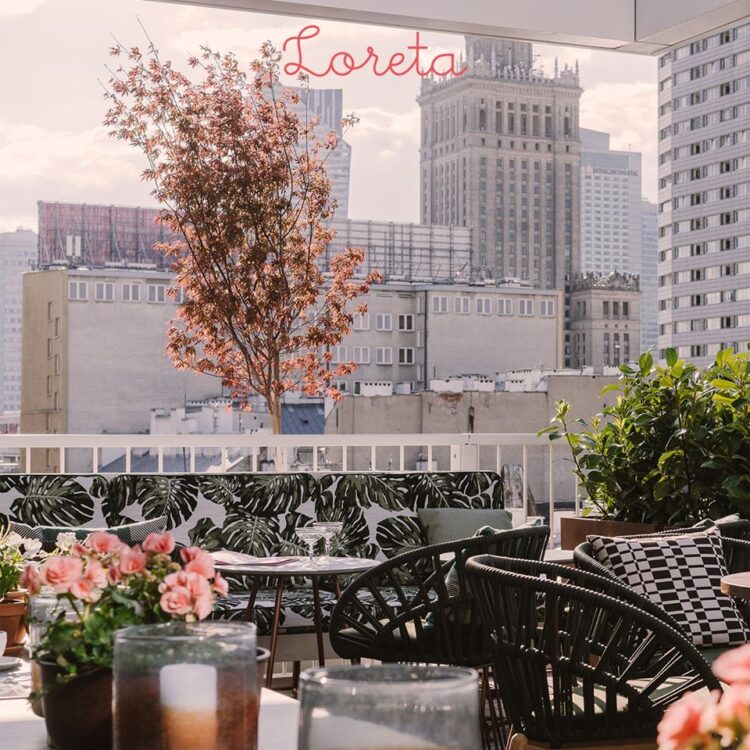 The terrace, though, is the clincher. As night falls, retreat to a deck signposted by a neon the color of bubblegum pink; here, amid bristling greenery and low-slung seating, join other cocktail hounds enjoying house sips such as the Loreta Cup – a sophisticated mix of whisky, agave, chili and lemon. Good as these signature drinks are, the best bet is to challenge the gunslingers at the bar to make something a little more personal: their ad-libbed cocktails are a highlight.

Stixx
Pl. Europejska 4A
Nowhere symbolizes Wola’s seismic changes more than Pl. Europejski: but while the temptation is to gawk up towards the sparkling Spire, doing so ignores the changes on ground level. Filled with curving walkways, pinches of greenery and fancy water features, the city’s first post-war public access square is really quite something. But while it’s integrated seamlessly into the very fabric of the city, it’d feel incomplete without the addition of Stixx. 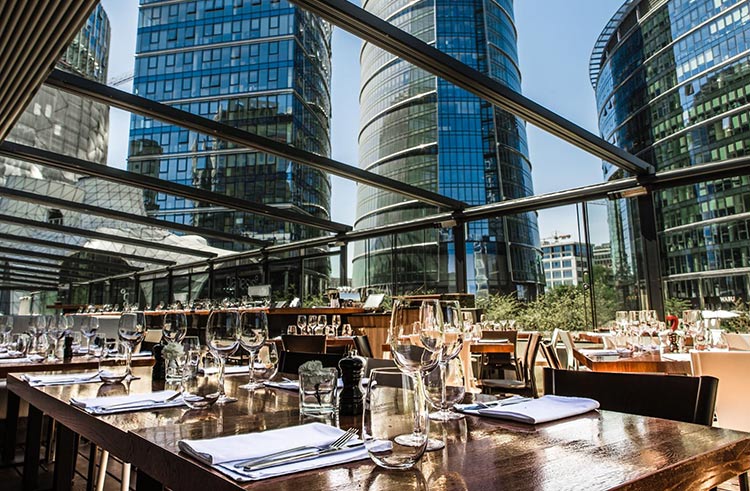 Opened a few years back amid much hype and fanfare, it’s a place that captures the essence of New Warsaw: smart, sophisticated but also sassy and fun. Certainly, that applies once the day reaches cocktail o’clock. With the roof rolled back on the all-weather terrace, the feeling is of being somewhere truly international; that sensation is amplified by the cosmopolitan crowd, a diverse global menu and a style that effortlessly slips between restaurant, hangout and bar. Such are the aesthetics, you’re reminded of a yacht party in Cannes.

The Alchemist
Pl. Piłsudskiego 3
A small place with a big bag of tricks: upscale gastro-pub grub from Brit chef Ed Shellard, fancy cocktails, and a self-serve wall of beer from a choice of global brewers. Poland’s still getting used to the idea of ‘a pint after work’, but in The Alchemist the idea of a post-office drink just seems so right. It’s a place that screams, “off with the tie, there’s drinks to be had!” 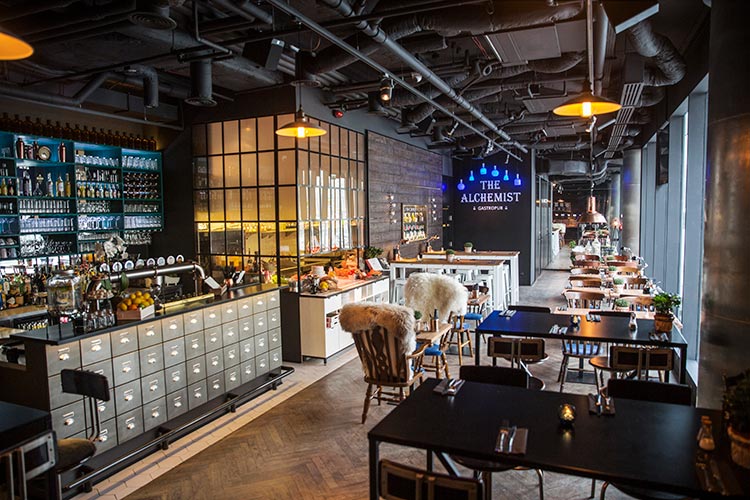