On the one hand, an emblem of modern Warsaw, on the other, a graveyard of communist memories: time to explore the SKRA sports complex!
(Text: Alex Webber | Photos: Ed Wight)

There’s perfect and there’s too perfect. Look at Łazienki. Beautiful, isn’t it. But stray onto the lawns and you’ll find yourself at best, yelled at, and at worst, fed to the peacocks. You’ve got to ask, what’s the point in visiting a park if you’re only allowed to look at the grass? Then there’s places like Pole Mokotowskie – a park not just for the people, but also their dogs, Frisbees, rollerblades and longboards: basically, you’re allowed to enjoy yourself.

That’s never been truer than this year. Launched in May, the Piknik Warszawski project has caught the imagination of the public in a way no-one could have dreamed. Held each Sunday, weather permitting, at the Iskra club on Wawelska 5, the event has tapped into Warsaw’s new mania for ‘doing things together’. While the whole initiative takes meticulous planning, it’s the fun-loving spontaneity that is the most apparent: this is a place of DJs and deckchairs, food stalls and hammocks. Of course the queues can snake a bit, but such is the mood that nobody minds. In fact, with none of the sleaze and pressure of a nightclub, it’s the Insider’s favorite place to strike up some banter with a mysterious stranger. 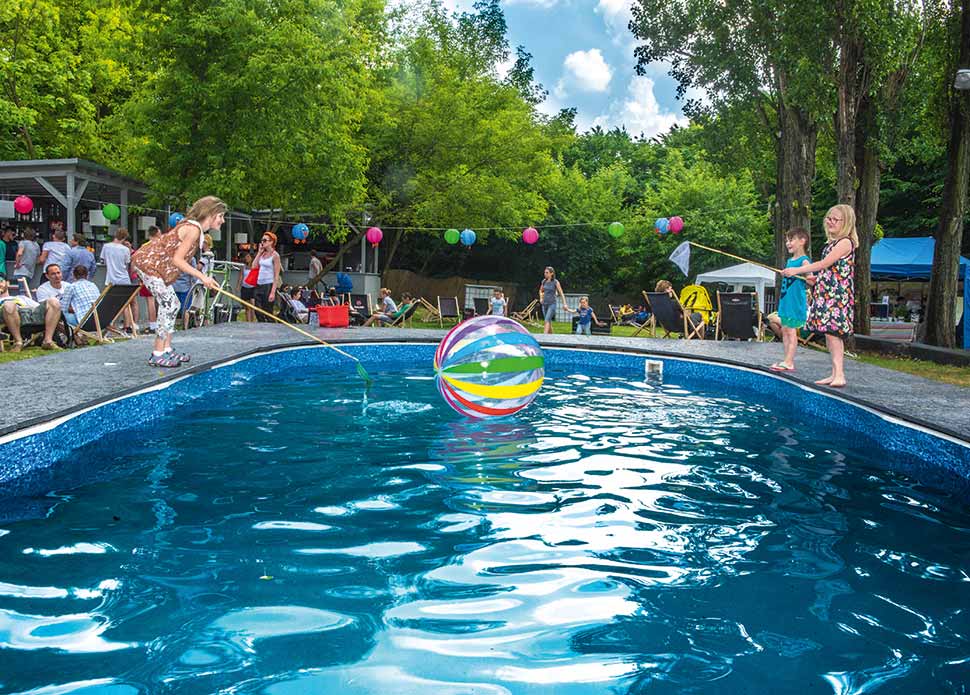 With all the yoga mums and beardy guys, there’s definitely a heavy middle class accent to the ‘picnic’, which makes the location all the more incongruous. Set around a repurposed water pump facility, a swathe of disheveled greenery cuts Iskra off from the rest of Pole Mokotowskie. Creeping through a hole in the fence (there’s a couple on ul. Ondraszka) fledgling treasure hunters will find the remnants of a vast swimming complex that was built in the 70s. Crunching over broken glass, loose vegetation lashing your face, one is pulled into an alien world where nothing feels real.

Spanning seven acres, the pools were cursed from the start. Plans for them were originally formulated in the early ’60s, yet they were only completed in 1973. ‘Swimming season is already at its peak,’ moans an archived article in Stolica magazine, ‘but the pools still aren’t ready – a lack of skilled tilers has been blamed, and even appeals in the media haven’t reaped results.’ Regardless of setbacks, the network of four open-air swimming pools retain a special place in the hearts of the locals: urban exploration forums are filled with reminisces from people who learned to swim here, stories of nervous first dates and assorted rites of passage.

Clicking through pictures taken during the area’s heyday, the contrast between then and now is hard to believe. This is particularly true of the focal point, a disintegrating water slide coated in graffiti. As we muse over the scribbles (“Bungo Rulez” and “Punx Not Dead”) we’re close enough to the picnic to be momentarily distracted by the sound of modern Warsaw living for today. 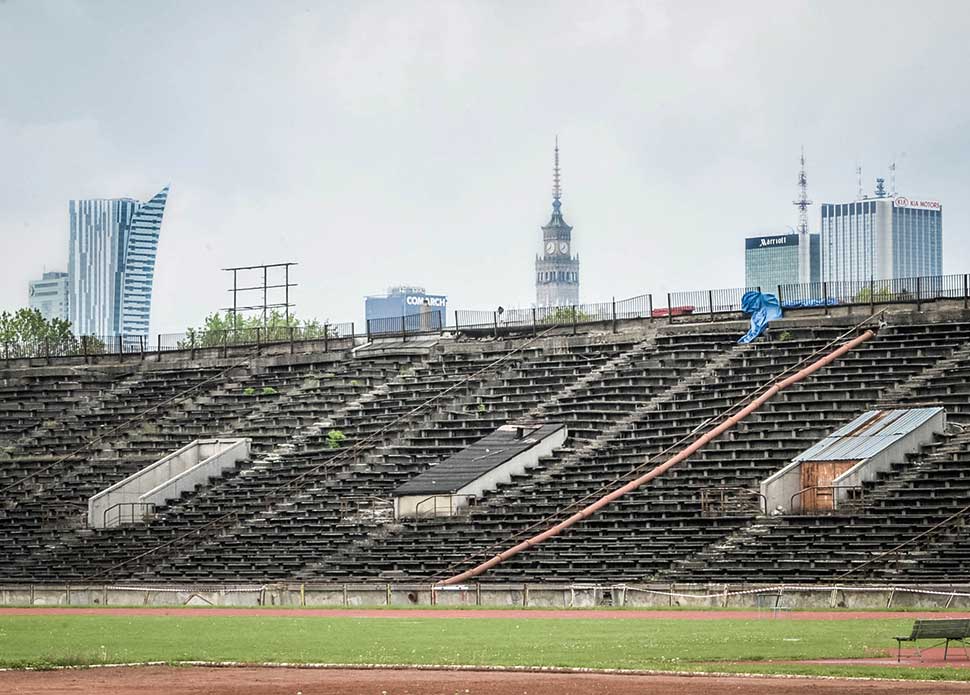 The political changes of 1989 signaled the end of the line for the swimming baths, with dramatic cuts in state funding meaning it was a matter of time till they faced-up to closure. The nearby SKRA stadium has fared better, but not by much. Opened in 1953 as a 35,000 capacity speedway track, its role in Polish sporting history is well-documented: in 1969 the country’s first ‘tartan’ running track was added, and SKRA subsequently became a breeding ground for the nation’s top athletes. Among them was pole vaulter Władysław Kozakiewicz – a familiar name amongst all patriots, Kozakiewicz famously caused an international storm with an ‘up yours’ gesture directed towards a hostile Russian crowd during his gold medal winning performance at the 1980 Moscow Olympics.

Today mind, the stadium’s operating capacity is down to 58%. Refurbishment plans that would have seen it used a training ground for Euro 2012 never saw light, and it’s now over 20 years since repairs were carried out. The distinctions between this and Warsaw’s football stadiums (yes, even Polonia!) are acute. Walking around the perimeter we stumble upon a tramp who has turned one of the former exits into his home. Viewing us as boorish intruders, he continues to dry his underwear on an improvised washing line.

Frustratingly, this could all be so different. Irish property developer Global Partners have made repeated attempts to lease the property and revive it from the brink. One such pitch made in 2008 envisioned a flock of 200-meter skyscrapers complimenting an aqua-park, sports museum, restored parkland and a state-of-the-art stadium holding 15,000. The city, on their part, have refused to play ball, with the whole palaver being played out in the courts. As the lawyers make their money, SKRA slowly dies… 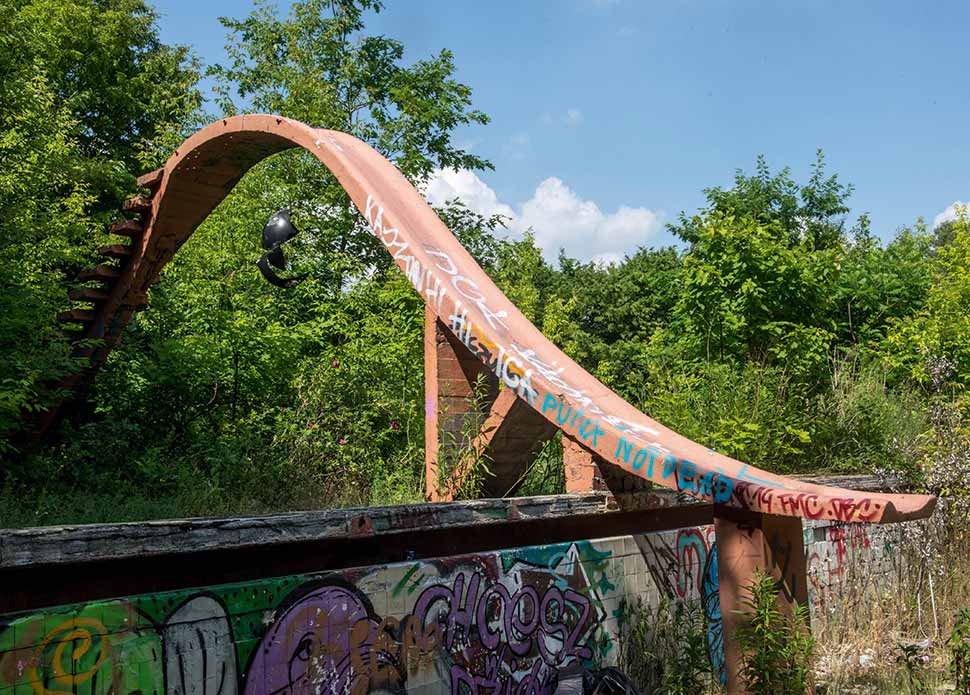