alternative89 torun1 travel46 weekend132
A dreamy city of cobbles and cloisters, steeples and spires, Toruń has long been regarded as one of Poland’s tourist trump cards… (By Alex Webber...

A dreamy city of cobbles and cloisters, steeples and spires, Toruń has long been regarded as one of Poland’s tourist trump cards… (By Alex Webber | Photos Ed Wight)

“So fine is Toruń,” wrote Jan Długosz, “that perhaps nothing can rival it in terms of beauty, location and luminous buildings.” But I bet this esteemed medieval chronicler wasn’t staying at the Retman. That’s where I find myself, lugging my bag up some rickety stairs. The room is dark and brooding and would only be considered spacious by a visiting ant. As I move across the floor, the hotel’s foundations creak with every step. My heart sinks as I realize that for the next 24 hours this will be home.

In all fairness, while the Retman is neither luminous nor beautiful it is well located – just inside the old town walls. And make no mistake, this is an old town to rival anywhere in Poland. Founded in 1233, Toruń has traditionally been passed like a Frisbee between Poland and next door. Yet despite complex ownership issues, its historic core has escaped devastation, avoiding the fate of many of its neighbors. You appreciate this quickly: as the taxi crawls across the iron-truss, interwar Piłsudski Bridge, I marvel at the vista that appears up in front. It is a skyline of steeples and spires, a view that’s justly been named as one of the ‘seven wonders of Poland’. 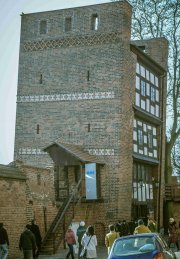 Having made it across the bridge, the old banger of a cab clunks into the old town. We chunter past a crooked tower that tilts to the tune of a full five degrees – but while it looks like it’ll go tumbling any minute, this leaning fortification has been defending the city for 700 years. There is no time to linger on this sight. Plunging down narrow streets, my head is soon swiveling like a submarine periscope: to my right there is an majestic rotunda that functions as a prison, and straight ahead there’s a dallying pedestrian that the driver hasn’t seen. Crash. After a quick flurry of curses we’re off once again, before finally coming to a standstill at the doors of the Retman.

The photographer has already arrived, and he’s not happy: “When you asked me to do a travel piece I thought you meant Turin.” His complaints fall on deaf ears and we shuffle away to the first point of call: Tourist Information. While stocking up on the customary bumph, I am nudged by the cameraman. “I know,” he whispers, “let’s get a picture of you baffling the staff by asking where you can view The Toruń Shroud.” The English don’t enjoy the best reputation as travelers, and this is one reason why. There’s bewilderment and head shakes as we finally exit.

Yet the trip is looking up. We discover the Olbracht brewery and claim a seat inside a giant empty barrel as we order beers and pore over guidebooks. This was the city of astronomer Nicholas Copernicus, the brainbox who deduced the earth revolved round the sun, and his name features prominently in all tourist material. Around the corner, we learn, the house of his birth can be visited in the Rynek. But the only stargazer I have time for is Mystic Meg, so this is a suggestion we swiftly overlook. 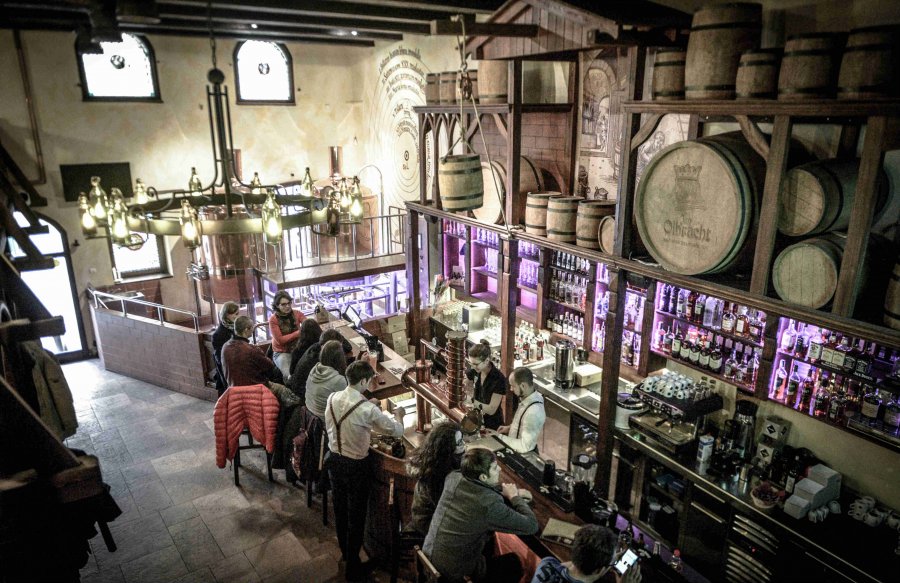 Instead we find ourselves exploring the square and the streets that shoot off it. Quirky curiosities abound: there’s a donkey statue which is a replica of an ‘iron ass’ criminals were once forced to sit on while their feet were weighed down; from a rooftop, we spot a brass cat which celebrates a moggy that once chased away a horde of Swedish soldiers; and by St. John’s Church, there’s a statue of a fiddle-tooting boatman surrounded by frogs – so the story goes, Toruń once endured a plagues of frogs which only ended once a boatman led them away in Pied Piper style. And like all medieval cities Toruń once had its own resident dragon: find this scary beast depicted in murals about town. Further examination of one of my pamphlets determines he was last sighted flying over a stream in 1746.

It is in such aimless meanderings Toruń comes alive. Soaked in a spring half-light, the Gothic architecture glows warm red and casts long, deep shadows onto the cobbles. The effect is mesmerizing, and this is never truer than as we walk down ul. Podmurna. Away from the hustle of the square all is silent and still. We are alone, bar a couple walking hand-in-hand far in the distance. It’s a timeless scene and only disrupted by our rumbling stomachs. 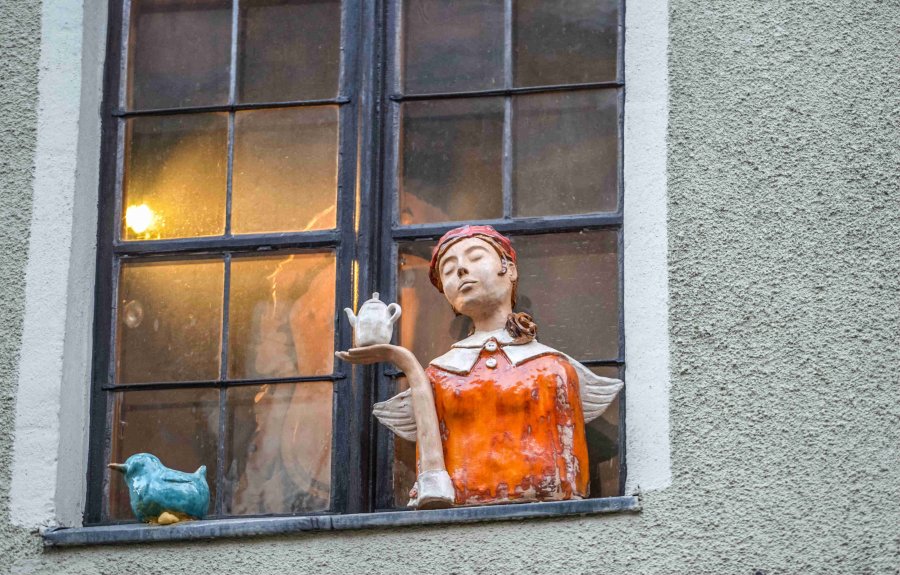 It’s no use pretending Torun is a place for foodies, for it is not. I’ve eaten better in hospitals. Originally, the plan had been to visit Masala, a place opened in 1489 and recognized as one of the oldest restaurants in Europe. In the past both King Jan III Sobieski and Napoleon ate there, and more recently so had I. Back in 2010. By that time it had become something of a beleaguered venue serving ersatz Indian food and – I promise this is true – Indiana Jones pizza. That alone marked it out a must-visit this trip. Alas, we find ourselves thwarted by a hand-written note on its door announcing ‘remont’ in progress.

Growing increasingly desperate we settle for dinner in Prowansja, which as it transpires is a diabolical choice. As we plug our way through a sloppy heap of muck I stare in envy at the kebab shop opposite. It’s with groaning guts we finish the night in Krajina Piva, an atmospheric cellar stocking a couple hundred beers. We sample a bit of everything to erase the horror of what we’ve just eaten.

The next day, roused by a herd of wildebeest stamping up and down the corridor, we are up early and in remarkably good spirits. After all, I’m safe in the knowledge that in a few hours I’ll be back home in Warsaw and dining like a king. But first, a visit to the Gingerbread Museum. In actuality, it’s more of a gingerbread workshop and I really wouldn’t have guessed but it is hilarious fun. 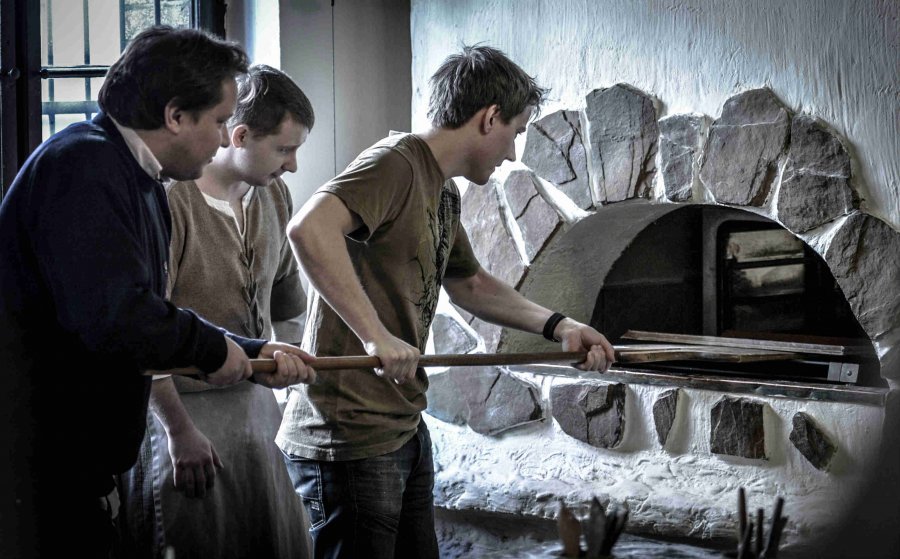 Toruń’s association with gingerbread goes back to the middle ages, and I’m told it was one of the biggest causes of homesickness for the exiled Fredryk Chopin. Using the techniques of yesteryear, and under the guidance of an attractive ‘spice witch’ and Łukasz, the ‘gingerbread master’, we are put through our paces and bake our own biscuits. It’s a brilliant experience and one made all the better when, at the end, I’m approached by one of the group and asked if I’m famous. Before I can answer in the negative there’s a whole line of people asking for autographs and pictures. An hour earlier I’d wanted to run away (get it – ‘to-run’, ha!), now I feel like I’m the King of the World. But that’s Toruń for you: a city of the unexpected.