A quick skip from the titillating pleasures of Nowy Świat’s ‘pavilion bars’, Machinarium is, quite literally, a step-up from the neighboring competition. Down a passage, then up some stairs, it’s a pub that unfurls in a metallic greenish haze. Not too dissimilar from a ship’s hull, the bar is all bolts and rivets, and the whole ‘age of travel’ theme is further explored through illustrative paintings of steam engines, zeppelins and other flying contraptions – Jules Verne would love it, and so too do we. A sprinkling of mechanical knick-knacks tempts and teases the reformed kleptomaniac, while the basement offers something else entirely: a rambling white painted space whose minimal design is punctuated with the occasional lantern, clock and reject store sofa: sit down, switch off. 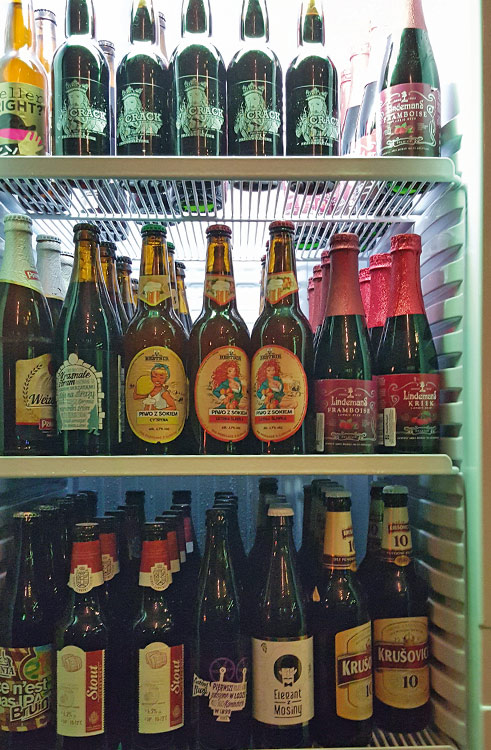 Although this area of Warsaw has a reputation for its busy, alternative nightlife, it does have a problem: as edgy as many of its bars are, their booze selection frequently doesn’t extend beyond bog standard euro-lager – a.k.a fizzy, yellow piss. Guess what though, Machinarium have thought ahead of the pack and fitted themselves out with four taps that see a regular rotation of beers aimed at hopheads. See nothing you like? That’s not a problem either, instead, swivel towards a fridge packed with eccentric beers from new wave breweries. When Machinarium opened a few months back, the suspicion was that it’d just act as vessel to soak up overspill from Nowy Świat. That’s not been the case: on the contrary, it’s become a destination in its own right – and a quite brilliant one at that.