alternative89 street art29 ursynow13
The Great Walls Of… Ursynów A new mural paying homage to a classic TV show has joined several others that have given the dormitory...

The Great Walls Of… Ursynów
A new mural paying homage to a classic TV show has joined several others that have given the dormitory suburb a bold, vibrant swagger…

Already responsible for several large format murals across Ursynów, the Bakcyl Studio agency found themselves again in the spotlight at the end of December after their latest effort was unveiled. Covering the flanks of two residential blocks on ul. Grzegorzewska (No. 1 & 3), as well as the entrance area of a nearby dentist’s practice, their most recent work celebrates the cult commie TV show Alternatywy 4, a 1980s satire based around the everyday lives of the residents of a fictional housing project. 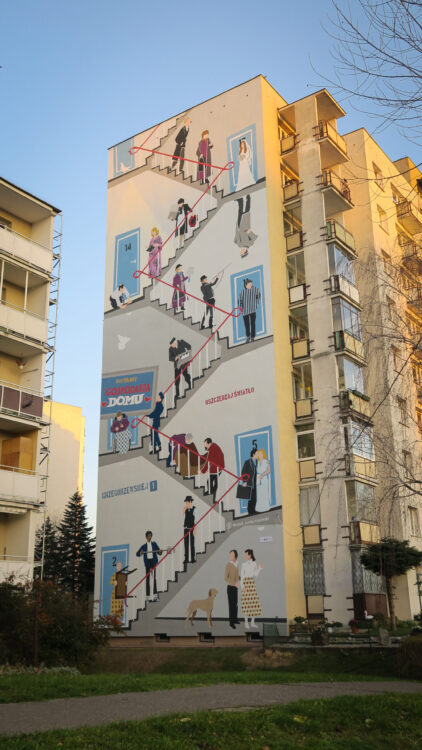 Depicting the show’s protagonists on one wall, and a map of the estate on another, the choice of canvas was by no means incidental – it was on this very spot that one of the seminal shows of the PRL era was originally filmed. Bartek Podlewski of Bakcyl Studio takes up the story…

WI: What were you looking to accomplish with this latest mural?
BP: It’s actually a collection of three murals that can be found at one rather special location: the estate where Alternatywy 4 was filmed. Back in the 80s it would be no exaggeration to say that practically everyone watched it; it was a gem of Polish pop culture but, as it turned out, not many people actually knew where it was shot. We thought we could change that and painting murals commemorating the show seemed like a great solution. Our ‘mission’ was to honor the series in a way that was dignified but also visually attractive.

What challenges did you face?
In the case of this mural, the situation was unusual because it was created as part of the Civic Budget. In short, that’s a local government initiative where citizens of Warsaw submit their ideas with the winning proposals decided by a public poll. So yes, the challenge we faced was winning enough votes to go ahead with it. To do so we promoted our murals heavily on social media and managed to qualify for funding. In all, a lot of people and institutions were involved in the realization of this project with the Red Sheels agency taking care of the final execution of the mural – they did a stellar job.

Your work covers various creative fields, but murals (and Ursynów) seem recurring topics…
We have strong ties to Ursynów: we work and live here and know its history well. At Bakcyl Studio I work together with Marcin Ślusarczyk and Zuzanna Podlewska, and we once found ourselves walking around the area noticing all the empty walls and likening them to blank canvases. 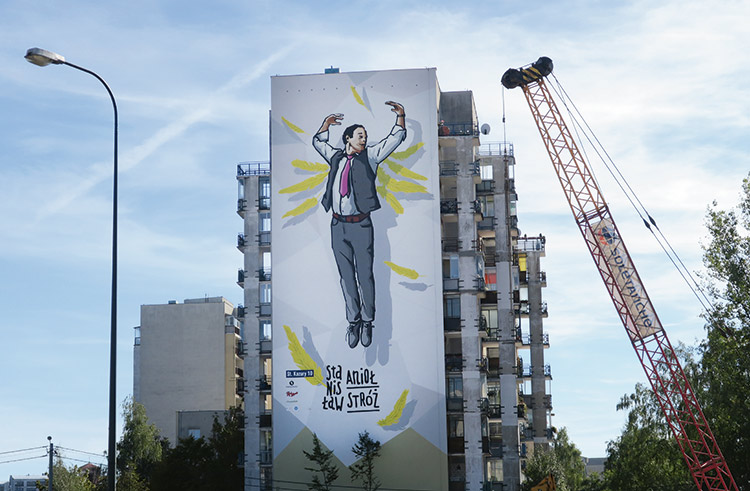 Seeing we specialize in visual identification we figured we could utilize those walls to say something special about the place. Five years on, we’ve completed over twenty murals in Ursynów and more are in the pipeline.

What’s the reaction been to your work?
The feedback we’ve had from the locals has been really positive – of course you do get the occasional dissenting voice, but in general the vast majority appreciate this form of art; murals lend life to public space and, in our case, many of them refer to the district’s history, shape the area’s image and serve as an attraction for tourists and outsiders.

We’ve heard of some people describing them as ‘signposts’…
That’s right. Ursynów is a huge district and it’s something of a bane for cab drivers – fifty square kilometers filled with similar looking apartment blocks. 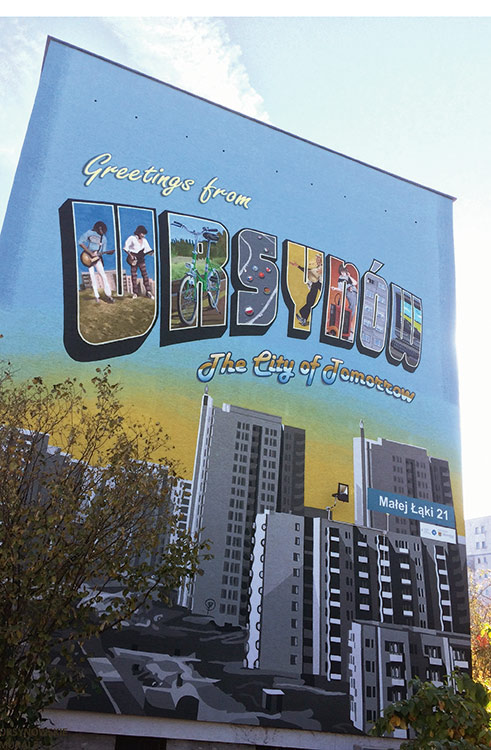 It’s easy to get lost here so the murals, by their very nature, have become signposts for the area. You’ll hear people saying “I live under the bear”, or “Find me opposite the angel”. They’re handy for newcomers!

What are the factors you need to keep in mind when planning a mural, especially such biggies?
The mural needs to be prominent so it’s imperative you choose the right wall, one that will make it clearly visible. Further, it’s better if the wall isn’t positioned in direct sunlight as colors can fade fast in such circumstances. Also, make sure there’s enough space for the scaffolding and be mindful of the weather – for obvious reasons, spring to the end of autumn is the optimal window when painting outdoors.

Any secret details we should look out for when it comes to Alternatywy 4?
It’s not so much a hidden Easter egg as it is a little artistic touch: not everyone knows that the director of Alternatywy 4, Stanisław Bareja, also appeared in the series – he played the role of a militia officer. On the mural, we depicted him upside down, leaning sideways and looking closely at the other characters. We wanted to add a surreal element to the mural to echo the nature of his work. It’s also a reference to Bareja’s unique point of view – he saw communist Poland as an absurd world turned on its head. 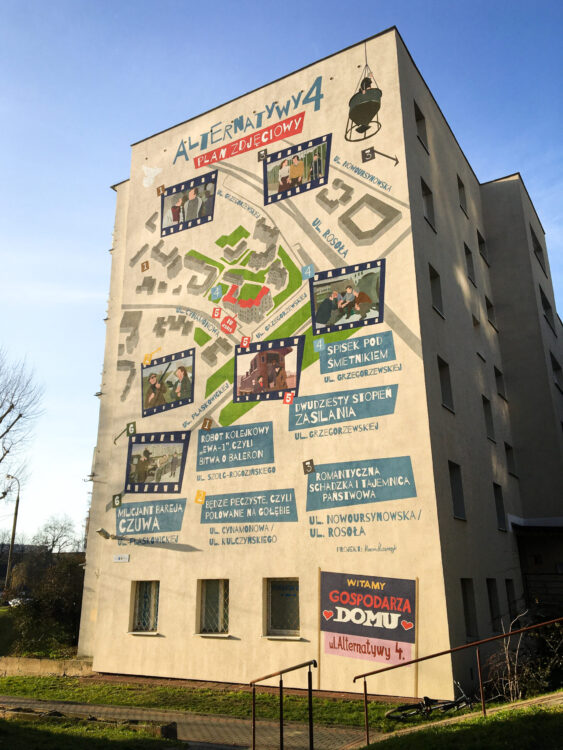 What are your own memories of Alternatywy 4…
My first memory of the series was actually quite traumatic! I was six when I saw it for the first time, and there was a scene with a robot called Ewa-1 that totally terrified me. It was a humanoid robot constructed for the specific purpose of standing in the line at the grocery store. With queues during communism often stretching several dozen meters this was a groundbreaking invention – unfortunately, in the episode I watched Ewa-1’s head fell off during a scuffle over some ham. That scene, along with The Shining, haunted me for years!