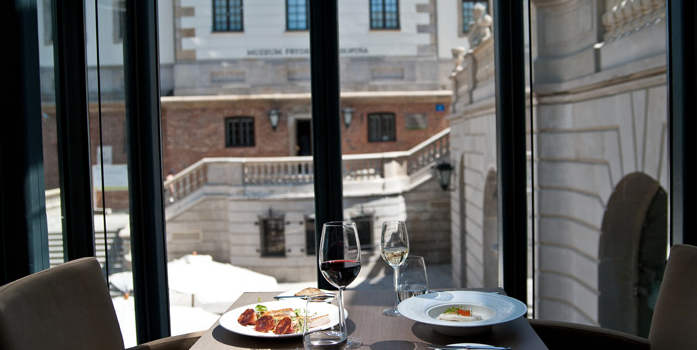 You could call Tamka 43 a pioneer. Opened before Atelier Amaro conquered the country, Tamka’s launch came at a time when Warsaw was making a fine dining transition. Remember what came before? For the benefit of those that don’t, upmarket dining meant ploughing through a glazed duck set at your table by a bow-tied skivvy while a weary old man played piano in the corner. Warsaw had modernized, but its restaurants hadn’t. Then came Tamka.

Originally captained by Robert Trzópek, there were those that presumed his departure from the kitchen might be a torpedo to the hull. But it hasn’t worked out that way, and the reason for that is Rafał Hreczaniuk – I’ll get back to him later. First, the restaurant. Facing the Chopin Museum, there’s a suspicion that this is a tourist restaurant serving tourist food (that damn glazed duck again). And indeed, when I arrive there’s a few sightseer sorts down on the terrace holding upside down maps.

Tamka though is more than a rest stop for out-of-towners. It’s a point clarified as we walk past the ground floor café and up to the dining part. The design is upscale but in a quiet, dignified manner, with the principal talking point being the view: there it is, right in front of you, the Ostrogski Palace set against cobalt summer sky. For date night, book the peacock’s perch, a table for two that juts out from the rest of the glass frontage.

This is, however, no time to comment on the interior. This is no time for small talk. On being handed the menu the conversation takes a serious turn. Decisions must be made: should we choose the tasting menu (zł. 180-250) or perhaps go a la carte? As it transpires it’s a question that’s taken out of our hands. It’s his day off, but Rafał Hreczaniuk is patrolling the restaurant. Taking a seat he assesses our wants before firing off an order that encompasses personal recommendations from the tasting menu. We do not disagree.

As we wait, Rafał remains. His is charm is easy and his look pure rock star – like he’d be a natural riffing on a guitar in a gritty Brooklyn bar. Talking about his past, he laughs as he recalls how he started off this chef lark as a pizza cook in Chełm. His story, though, is not of someone who got lucky and ended up bossing Tamka, but one of hard graft – from humble beginnings he’s worked his way up through fiercely competitive kitchens: two star La Fermata, one star L’Ecrivain and Chapter One, not to mention alongside Wojciech Amaro in Poznań’s Le Palais Du Jardin.

His talk is good, but is his food? The first arrival makes an immediate impression: a wild garlic panna cotta with just the right wobble and a sprinkle of peas that evoke a sense of goodness. There are, as well, new seasons carrots and a wafer thin crisp of bread. “I like my food to be simple but with strong flavors and a personal twist,” says Rafał, and while I wouldn’t call this dish simple, two out of three ain’t bad. In fact, it’s marvelous.

Next is zander, its skin nicely crisped and its meat soft as snow. It’s accompanied by a horse radish powder and a precise swirl of umami sauce. I’ve all but cleared my plate by the time my colleague has finished photographing his, and for a while I contemplate stealing some of his. Theft, in this case, is understandable.

Things are going well, but they’re about to get better. Beef cheek is an obsession of Rafał’s that dates to his Dublin days, and what we’re served goes beyond mere accomplished. Cooked sous-vide, the Irish beef is achingly tender but with that reassuringly meaty oomph, and the madeira sauce a natural companion. And yes, the girolles, deep gold in color and exquisite in taste. This is a course conducted in silence: words would just spoil it.

As the plates are whisked away there is an immense satisfaction that glows from the table, a sort of selfish sense of pleasure that blocks out the world. Dessert does not break the spell. There are strawberries, plump and red, that have been baked for three minutes; a geranium sorbet that feels flowery and perfumed; and rhubarb granita that still makes me smile. Thinking about it, so does everything else.