The Art Of Poster

A former stage designer of great prestige, Ryszard Kaja has since found a second life as one of the country’s best-selling poster artists. Here, he talks about his ‘Poland’ series, a critically acclaimed collection of over 120 tourist-style posters that have taken the nation by storm…

For a gallery of Ryszard Kaja’s ‘Poland” series, CLICK HERE 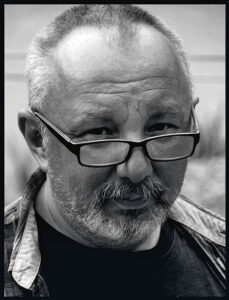 WI: From where did the idea for your ‘Poland’ poster series arise?

RK: Sometimes, something pops up in my head, knocks a couple of times and slowly crystallizes and it’s hard to say why. Let me think about it… it definitely comes from some of my interests. I’ve always liked traveling and discovering new places. When I was a child, I traveled around the country a lot with my parents; we had a beige Syrenka and we would drive along side roads throughout the country, stopping at the most beautiful places, sometimes completely unknown. I’ve always been fascinated by surprisingly different places. I’ve never understood tourist resorts where you travel hundreds and thousands of miles to land in a place that’s a luxurious copy of the one that you just left behind. The idea behind this series was probably also influenced by the fact that I had just left the theatre behind and a fascination with posters had grown inside me. It’s good to try something new to avoiding falling into a rut. If I had gotten into woodcutting I would probably have created a series of woodcuts; as it was I created a series of posters.

The series has been incredibly successful – can you explain why people fell in love with these posters?

I don’t know, I really don’t. Success like that really helps build your self-esteem, but I’m aware that exaggerated popularity is not flattery at all. A painter is a person who paints what he sells. An artists is a person who sells what he paints. Being too popular should make you feel uneasy because it becomes vulgar. This success, however, is nice because posters, unlike paintings, are made to order, and are aimed at a specific audience. That’s why a poster for a light operetta is different than for a Shakespeare play… well, it should be different anyway. But you have to make sure that you don’t get carried away. Rather, you should treat it as an opportunity to take on a new challenge. The tourist poster had died and I resuscitated it a bit unknowingly. I probably also met a need as it turned out that it was not just me who had missed it. The series is simple, sincere and has no pretensions to being great art. Now, a lot of people are copying me and there are loads of posters about Poland, but they are often just nice, rustic pictures without content. I like it when a poster contains an idea. A tourism poster should encourage people to visit a specific place, but I didn’t want to embellish reality; I choose topics carefully and meticulously. Today, patriotism is visible in very loud and aggressive slogans: eagles on black T-shirts and fluttering flags. I paint oilcloths, pickled cucumbers, meadows, farms, fountains, blocks in Ursynów and little appreciated scenes of modernity. It’s a world seemingly not very impressive and certainly not flashy, but it quickly turned out that my fascination with the usual struck a chord.

Your passion for Poland shines through in this series – from a personal point of view, what do you madly love about Poland?

Our normalness. I don’t try to paint this country as being more beautiful than it is. I know what our vices are, and they can be very irritating at times. I will answer using the example of beach windbreaks. All sorts of celebrities, especially those from the television with grotesquely stretched skin over their faces, curse these windbreaks, laugh at them and vilify them, virtue signaling how worldly they are. However, I thought that the Baltic Sea is not the Caribbean, it can be cold and windy and a windbreak makes sense, and I’m not at all sure that our windbreaks look worse than Caribbean umbrellas. I like this fluttering chaos of patterns, it is peculiar to us so why be ashamed of it? I have a weakness for this kitsch. So, I look at all these disdained stereotypical Poles known colloquially as ‘Janusz’ and ‘Grażynka’, marveling only that they have been baptized with these ridiculing names by the richest Poles. It’s puzzling, isn’t it? The older I get, I feel that I’m aging faster than others, and the fatter I get, the more understanding I am, maybe because I have traveled the world over and over. In this poster series, I try to talk about ordinary places and demonstrate their unusual and little-known highlights. The choice of place is also very important in this series, which is why I chose Szczebrzeszyn: essentially, to be able to mention the swishing sounds of the Polish language. These are posters that talk about our culture, our traditions and our truly inspiring nature, and about our pluses and minuses, about what is successful and what is less successful but still ours. 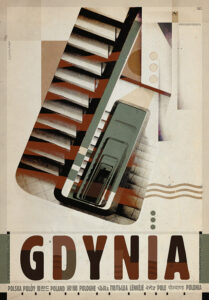 What are your early memories of Polish posters? Was it a magical world for you?

Finally, a question that’s easy to answer! I grew up among posters, so the poster was something ordinary, it was part of my childhood home as my father created them. Not so long ago, the National Museum in Poznań held a great retrospective exhibition of his work on the 30th anniversary of his death. Do I have favorite artists? I’ve got loads. Among those who don’t create posters, I love Hrabal’s work, I read Kapuściński avidly, I love Hockney, Persian miniatures, Schultz, Klee, Chagall and Russian constructivists, and almost all paintings from the late Middle Ages. I could go on for hours. As for poster artists, I’d first mention Jan Lenica. He was one of the few who managed to break free from the claws of the poster and through posters became a great artist. Also, I admire Tadanori Yokoo – he best reflects the chaos of today. I’ll also admit that in my longing for the integrity of dreams, I also like hand-painted large Bollywood movie posters and monstrous works from Ghana.

As an artist, what inspires you?

Hmm… everything inspires me. I wander around the world and I look, I like to look closely at the details, but I like places that smell of honesty, hence my fascination with kitsch. There is a lot of heart in kitsch. I’m not talking about cheap, trashy flashiness, rather about what is created with great commitment, even if talent is missing. I’m also fascinated by everyday life, the trivial, the things that don’t shine, and I like other worlds. The ‘other’ fascinates and intrigues me.

What makes a good poster?

I don’t know, I really don’t. Even if I knew the secret recipe, I’m not sure I could be tempted to create work that was only considered good? But because I don’t know, I can stay in my own world. Sometimes I sit on the jury of some competition. I look at the hundreds of posters and there is indeed something that is definitely better than others, but I don’t know why. There are no rules, or at least if there are I don’t know them. 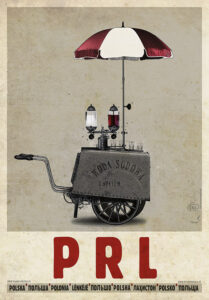 How would you describe your style?

[Laughs] Maybe KAIZM? I don’t follow fashion, I swim against the tide. That’s how it was with stage design. When I was designing sets, minimalist architectural decorations began to be fashionable, but I stuck stubbornly to painted decoration. So now, when the fashion is for abstract posters with text so deformed that it is almost illegible, where the letter becomes an intriguing ornament, I still stick to my painted or graphic works, because that’s who I am, that’s where I come from and I won’t change just because something else is fashionable. Minimalism is fashionable but so what. I am a eulogist of the baroque world, a eulogist of unusual normality.