The Insider gets the VIP treatment at Legia, and finds a world removed from the football match stereotype… BY ALEX WEBBER


The air is cool, crisp and heavily scented. Collecting an analytical sample would, at a guess, reveal over a hundred different colognes. The clink of wine glasses is constant and the gentle hum of chatter swirls overhead. And there is food. Huge gleaming platters supplied by the Belvedere restaurant. As I join the line to fill my plate a glamorous blonde with a big hat and even bigger boobs sweeps past. Heads turn. Men grin. In the distance, the turf glows a brilliant shade of emerald green. But, as unlikely as it sounds, I am not hobnobbing at the polo, I am at the football. 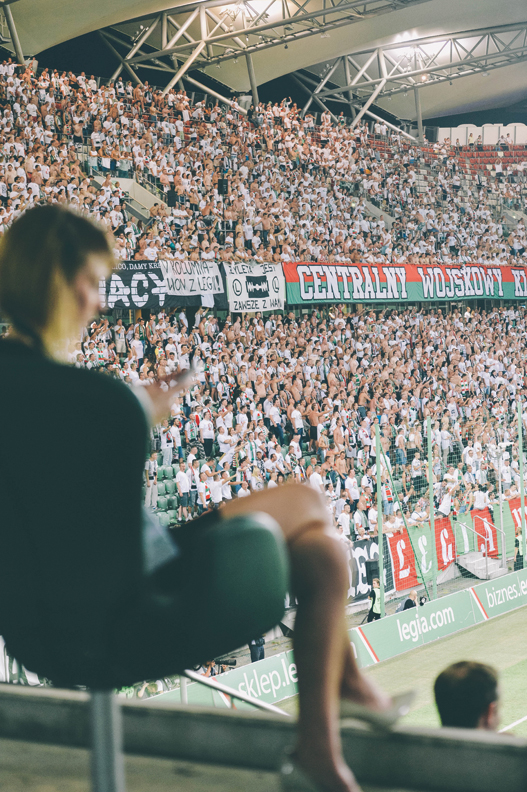 Granted, I am not alongside the typical football crowd – for starters, the only sweaty bloke that reeks of booze is me. The men here, in Legia’s Gold members lounge, are all fresh pastel shirts, fat glinting watches and slicked back hair. The ladies, meanwhile, could be categorized as catwalk: sky high heels and bags stamped with Italian motifs. In short, this is not the Legia Warszawa I remember.

Just what is the Legia I remember? Hmmm. It would have been 2003, with the match day experience defined that afternoon by whirring helicopters and the grunt of thugs:all shaved heads and amphetamine anger. As for the game, I dimly recall the referee refusing to leave the center circle. For much of the match, neither did the players. They looked too hungover to move either far or fast. From a footballing perspective, this was a personal low. 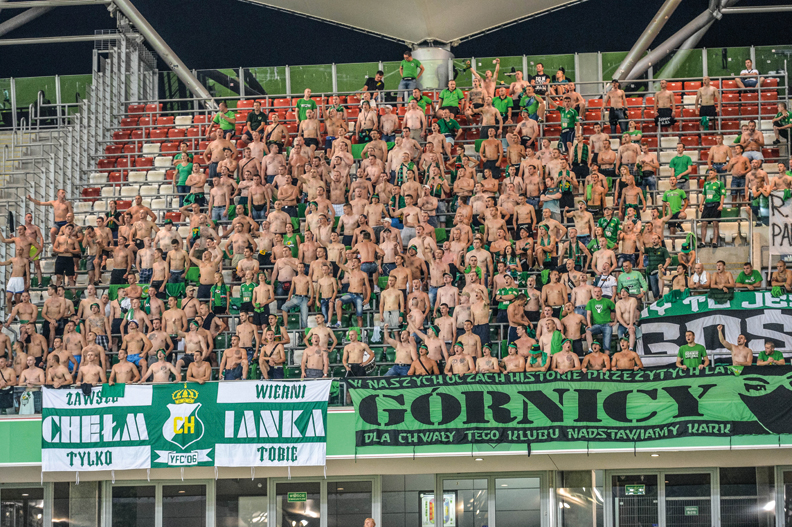 But Polish football finds itself in the midst of a renaissance. Buoyed by the success of Euro 2012, interest in the domestic game has rarely been higher. True, age old problems continue to blight the sport, among them boardroom mismanagement, outright crookery and hooliganism. And yes, type Legia into YouTube and you’re as likely to find footage of fans running around with improvised cudgels as you are any goals. Yet Legia have done more than most to drag the Polish game into the 21st century.

Their ground, the brutally titled Pepsi Arena, is ample proof of this regeneration. Home since 1930, it’s undergone a reconstruction – completed in 2011 – that has seen it fully remodeled as a two-tier, wraparound stadium. Holding 31,000, it is a shining example of the new face of Polish football and that’s especially true of the Gold and Silver sections. With our ‘access nearly all areas’ accreditation collected, it’s to the Gold lounge we head. 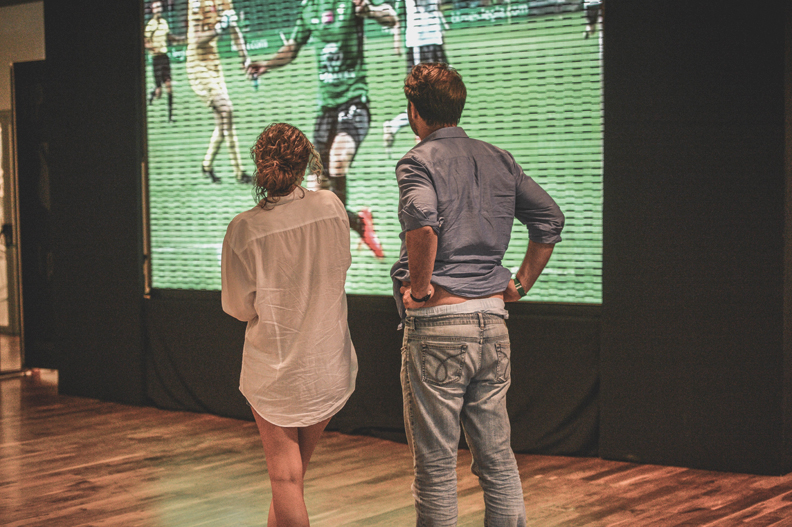 In spite of the riches that lie ahead, we nearly go no further – the hostess stood at the door is pristine in her beauty. Our legs have turned to jelly and we pause, staring in wonderment at this impossible specimen. But there’s a job to do, and that involves mingling inside the lounge. People pay up to zł. 15,000 per season for the privilege, and it soon becomes apparent why. Entering, there is the convivial air of a Sheraton Sunday brunch: there is free flow beer, an extravagant buffet and a chattery buzz hanging in the air.

This though is better than brunch. It’s better than brunch because it comes with the added bonus of football. As kick-off draws closer, the atmosphere and anticipation ratchets up a notch until we stream en masse to the stands below. That’s when it happens. For the last ten years Legia fans have adopted Sen o Warszawie as their anthem, and it is sung with gusto before every kick-off. As we file down the gangway the opening chords to Czeslaw Niemen’s hymn to Warsaw ring out from the tannoy. The loudspeakers are immediately drowned out as men, women and children rise as one to raucously recite Niemen’s epic ode. It is thrilling; a moment of pure electricity.Founded in 1916 by soldiers serving on the Eastern Front, Legia are considered one of the grande dames of Polish football, with ten league championships and a record sixteen Polish Cups to their name. The season has started brightly, and it looks a dead cert already that Legia will challenge for a third consecutive title. But all is not well. Tonight, as Legia take to the pitch against Górnik Łęczna, players and fans alike are still reeling from the news that their side has been turfed out of the Champions League for fielding a suspended player.

It’s a course of events that has lent added gravitas to this match. What should have been an insignificant early season game has an edge and a needle to it. The atmosphere is red hot and defiant and the crowd is seething with injustice. The players, meanwhile, look visibly distracted. The first half passes with little in the way of incident. Full of huff and puff but shy on both shots and endeavor, we instead pass the time watching Legia’s hardcore behind the goal.

There are swathes of empty seats all around, but the ground is rocking – the Legia faithful are relentless in their backing of the team, and the wall of noise sends tingles down the spine. Even the photographer, a sworn football-phobe, is enthralled by it all. “Amazing,” he shouts over the din, “bloody amazing.”

With the first half wrapped up we retreat to the lounge, tanking back beers and raiding the buffet. As the football resumes, the lounge is still packed – but not for long. Legia roar out of the traps scoring a goal in the opening few minutes. A second soon follows. The crowd is going bananas. We are as well. Górnik’s bewildered side, organized and stoic in the first half, have had a meltdown. They chase shadows, flap about and, on the hour mark, find themselves reduced to ten men after a clumsy foul in the box by Tomislav Bozic. The resulting penalty makes it 3-0 and the match is all but sealed.

Sensing my chance, I make a beeline back to the Gold lounge to take advantage of the lack of queues. I raid the sausage station and settle back to enjoy the rest of the game from behind a glass screen. But trouble is brewing. My pass gives me access to the Gold club but, apparently, not to its food. As I settle down in an empty dining room I am approached by a gruff man with a sumptuous moustache. Judging by his appearance he could be a lion tamer, an armed robber, a wrestler or a security guard. It turns out he’s the latter, and he’s not happy that I’ve just helped myself to the sausages. “You should leave,” he instructs, making it clear that should I refuse he might set that lion on me.

Chastised, and escorted from the Gold section, my mood doesn’t suffer. Legia are rampant, and goals four and five are duly notched up. To their credit, Górnik’s clutch of fans haven’t let this humping dampen their spirits and they bounce around swirling their shirts overhead. Legia’s fans respond by raising the volume still further. My ears are throbbing. If this is what happens against Górnik Łęczna, what’s this place like for a big game? Totally nuts, I guess. 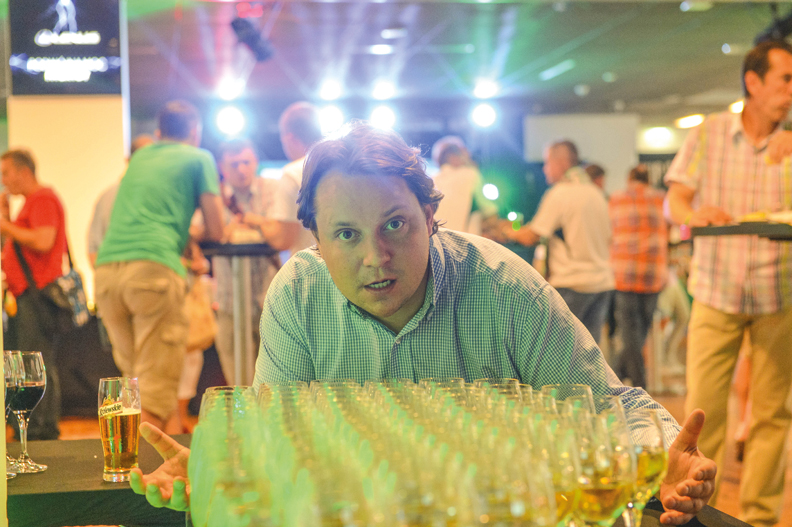 The fulltime whistle sounds, and we head down to the next stage of the night – the press conference. I’ve always imagined the post-match Q&A to be a shouty scrum of frantic questions and general pandemonium. It’s actually the opposite with Legia’s manager, Norwegian Henning Berg, pondering questions with thought and grace. The photographer urges me to ask one of my own, but conscious of the suspicion our presence has stirred amongst the press pack regulars my nerve goes. Instead, we slink back to the hospitality area for further refreshment.

As a traditionalist, I’m at odds with the whole concept of corporate entertainment at football. But tonight has been a blast. We have been royally entertained both on and off the pitch, and as we lark around the now empty stands we are like kids, breathless with excitement. One time local football was characterized by disintegrating stadiums, grim football and psychopath fans. Not anymore. Welcome to Legia, 2014.