Varso Vie gives new impetus to Pl. Konstytucji with a knock-out cocktail menu that all can handle…

There’s one big problem with Varso Vie, and it becomes instantly apparent: to sit outside, and bask in those first shades of autumn, or dive indoors, into a stark space shaped like an upside down T. Should you pick the latter then there’s two anterooms to choose from, both cool and white and decorated with art that’s equally sensual and suggestive. Fine for lunch, fine for dinner, but for drinks? Nah. For drinks, as everyone knows, nowhere quite beats plotting up at the bar.

And that pits you directly against problem No. 2. What to choose? In this case, compromise is at hand – can’t work out what to order? try the lot. That’s not the kamikaze idea it might originally sound. The listed cocktails are thin in number (five house recipes, and three hard shakes), making drinking the whole menu not at all far-fetched. But why would you want to slug your way through the menu in the first place? The answer is not as some sort of headlong plunge into masculine one-upmanship, but because it’s a thing of real merit. These are cocktails that are ready to go into the ring with the best in Warsaw… and possibly win. 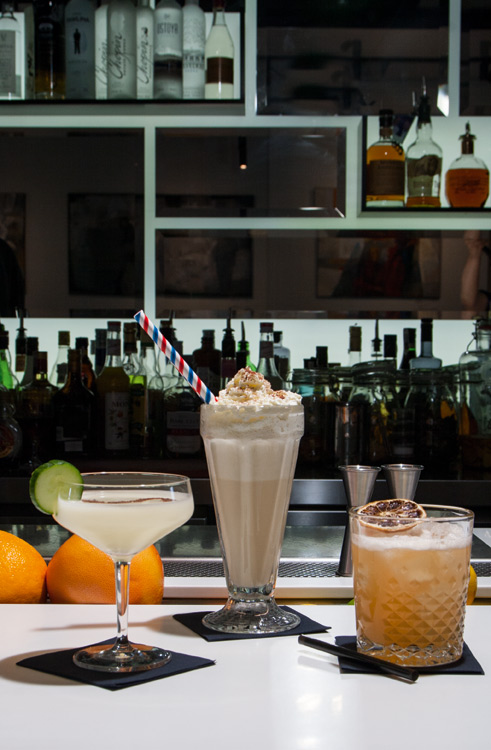 This shouldn’t come as a surprise. Homemade syrups, seasonal ingredients and high caliber alcohol are all present, but so to the most important component: the staff who can handle them. On this day that means Agata and Johnny, two former baristas who’ve expanded their oeuvre by learning the dark art of bartending. If slinging cocktails was not their intended career path then you certainly can’t tell.

A Polish Colada arrives first, this bar’s local take on the legendary Pina Colada. Involving Bols Natural Yogurt, Pawlina vodka, pineapple, lemon and a sprinkling of chocolate, it’s a superb drink that does a grand job of rehabilitating a largely derided classic. Next, a whisky sour. It’s not on the menu, but this reliable old timer is a good way to measure the skills of the staff – yes it’s a simple drink, but how many Warsaw bars get it wrong. Varso Vie sail through the challenge. In fact, they turn something of a pedestrian drink into a revelation. It’s not all serious, either. Fun is supplied by the hard shakes: tall, towering glasses of cream and froth. “I call them a dessert for grown-ups,” says Johnny. I say, pour me another.

Varso Vie works as a restaurant – that much I already knew. What I couldn’t have guessed was the level to which they’ve also nailed the drinks. This is unexpected. As a rule, restaurants in Poland are no good at cocktails – hell, as a rule, most bars in Poland are no good at cocktails. So for Varso Vie to claim a double is news to be shouted. And very loudly.