Sixty-five years old today, we dredge through the archives to present the Insider’s quintessential piece about the Palace of Culture and Science… BY JAY MARTIN

The inclusion of the Palace of Culture & Science on Warsaw’s official heritage list in 2007 provoked general outrage. A protest letter signed by 70 prominent personalities from the cultural, scientific and media worlds, angrily stated that it was not a cultural monument, but “a symbol of Polish subjugation to the Soviet Empire and the humiliation of the Polish nation.”

Yet many spoke up for it. Professor Andrzej Tomaszewski, head of the Cultural Heritage Protection Board at the time, argued, “It’s a distinguished example of Social-Realist architecture. Even in the former USSR it’s difficult to find objects of a similarly high class.” Architect Stefan Kuryłowicz added, “it’s a symbol of a bygone era and should be protected, even though it’s associated with the Soviets.” 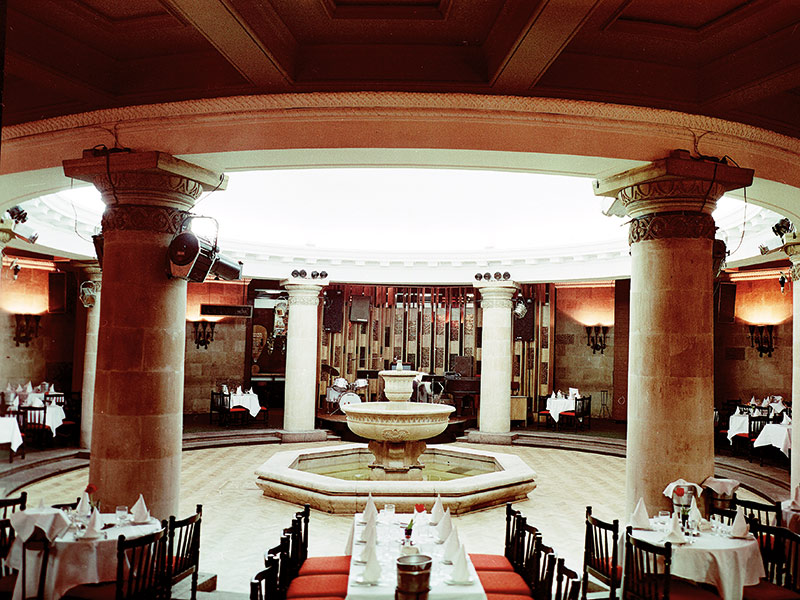 One thing that’s above debate is that Warsaw’s relationship with this building – known by nicknames such as PKiN (from its Polish acronym), ‘Stalin’s wedding cake’, ‘the Syringe’ or even, ‘The Elephant in Lace Underwear’ – got off to a bad start.

Before the war, apartment buildings had stood where the Palace is now. But by the time the idea of such a Palace sprang to Stalin’s mind in 1952, all that stood on the current site – like much of Warsaw – was a pile of rubble. In a rather astounding construction feat, the Palace was built in just three years, with as many as 16,000 workers involved at any one time.

As official Warsaw tour guide Artur Nagórka says, “It’s really hard to imagine, the whole centre of Warsaw was demolished in the Second World War, and this Palace was built in the ruins. At the time, it was the second tallest building in the whole of Europe. The second tallest building in Warsaw at that time was only 66m – the height of the four smaller towers at each corner of the Palace.”

Given this, it’s probably not surprising to find that people weren’t initially so much impressed as confused. “People were brought from all over country, to show them this achievement of the new authority,” Artur continues. “But for many people, the only thing they knew that was anything like it was a church. So very often they knelt down before it.” 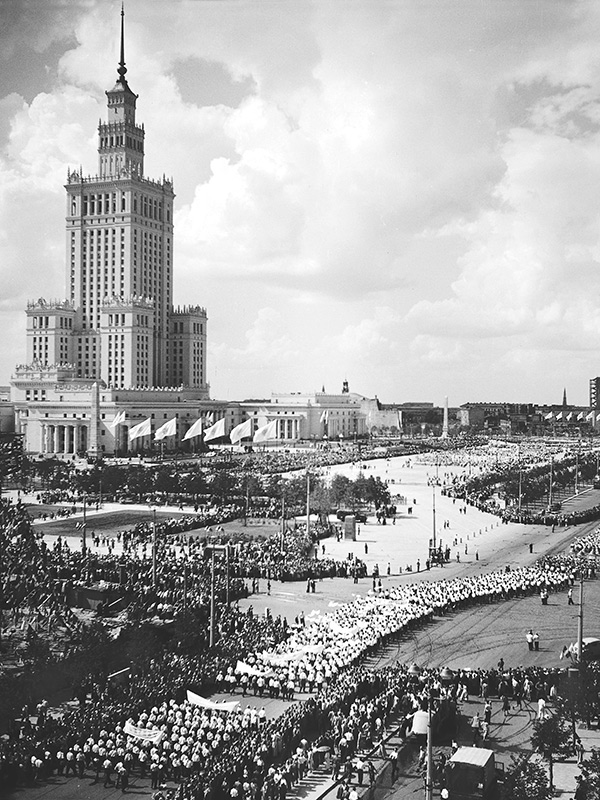 While Stalin would no doubt have been pleased, for most people the overall effect was rather more sinister. As Polish teacher Ewa Kowalska, who spent many hours in the Palace’s university library as a student, says, “the building exerted a strong pressure on the minds of the people. It made you feel like a very small part of a big society, without any power. Repressed not only by the regime, but by these very walls.”

The Palace’s architectural style broadly conforms to what’s been called the zuckerbackerstil, or ‘wedding cake style’ so typical of Stalinist architecture, yet the architects also included many Polish design features, taking inspiration from Wawel in Kraków, and the town halls of Chełmno and Zamość among others. And, as Artur explains, “Stalin at that time wanted his buildings to be as modern as possible. By modern he meant American. So he sent his best architect, Lev Rudniev, to the States to learn how to design buildings like the Chrysler Building, Empire State Building, or the Manhattan Municipal Tower. So in that way, it’s the most American building you can imagine.”

In other gestures, the architects put two of the most famous Poles on either side of the entrance, writer Adam Mickiewicz on the left, and the astronomer Copernicus on the right. They’re outnumbered, of course, by dozens of quintessentially Soviet-Realist statues, depicting ‘acceptable’ Soviet professions like construction worker, miner and mechanic (and a lute player and shot-putter for good measure). But these weren’t custom made for the Palace, but churned out en masse by a factory in Estonia. 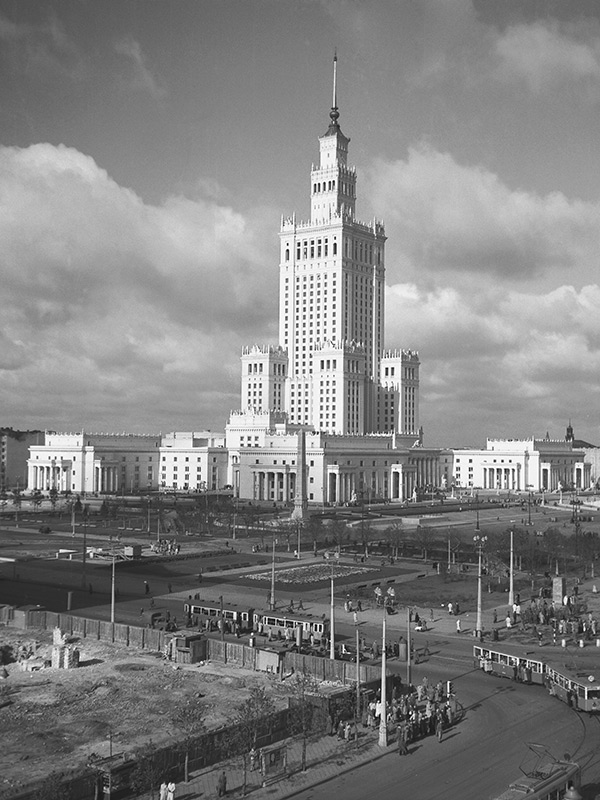 One of them, a particularly handsome chap on the western side, deserves a second look. He’s holding a book written by three people: Marx, Engels, and Lenin. Originally Stalin’s name was also inscribed on the cover, but it’s since been plastered over – there’s an empty space there now.

This isn’t the only place where Stalin is missing. It was always intended that there be a much larger statue of Stalin standing in Pl. Defilad in front of Copernicus and Mickiewicz. But when Stalin died before the Palace was finished the plan was quietly shelved. Along with the Palace’s original name: the Joseph Stalin Palace of Culture and Science.

The Palace also played its little part in defying Soviet oppression. Like hosting the Rolling Stones in 1967 – the first such concert behind the Iron Curtain. Even the government functionaries patrolling the aisles couldn’t contain the enthusiasm of the crowd – who, prevented from expressing their admiration by standing, did so by taking their jackets off and waving them overhead.

Fast-forward another 40 something years, and the things inside boggle the mind: two museums, four theatres, university offices, a post office, even a swimming pool to name a few. Looking at how Poland today is making use of its gift – unwanted though it was – you could be forgiven for thinking that the giver’s spirit had been erased from inside the Palace as surely as his name was from its outside.

As Poland has overcome its traumatic history and staked its place in the modern world, this ‘Elephant in Lingerie’ – big, ugly perhaps, but impossible to ignore – has also stood its ground. As one young Polish professional, Szymon Bocheński, says, “It’s not a symbol of Communism anymore. We should not forget the past, but we should make use of these historic icons as symbols of a modern, dynamic city instead.”