Heavily peppered with operatic twists and tragic turns, the story behind Warsaw’s Pl. Teatralny is every bit as thrilling as the drama in its theatre… 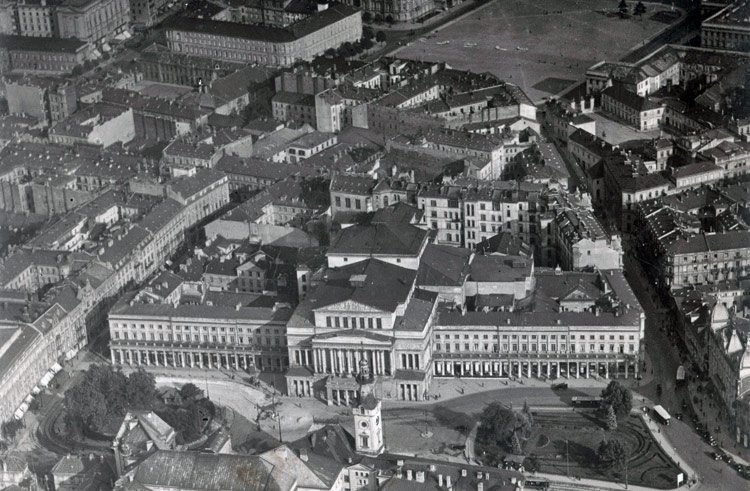 1920s. Where there’s now a car park once stood a park! The battle to return the square to its best remains ongoing…

Just imagine, an area steeped in history and culture with a car park as its center piece. Now you don’t need to think hard, because that’s what awaits at Pl. Teatralny. But aside from the concrete wilderness in the middle, Warsaw’s theater square is every bit as compelling as the dramatics played out on stage.
Dominated by the looming shadow of Teatr Wielki, the square was initially mapped out in 1818, with the theater itself added fifteen years later. Designed – inevitably almost – by Antoni Corazzi, the prolific architect of the time, it opened to a performance of the Barber of Seville in 1833. With Warsaw an outpost of the Russian Empire, naming it the National Theater wasn’t on the agenda, so the Wielki (Great) it was. Over the following decades it would see seismic premieres, among them Halka and The Haunted Manor, both penned by Stanisław Moniuszko. In an era when Poland was subjugated under foreign rule, the patriotic succor provided by these productions can’t be underestimated. 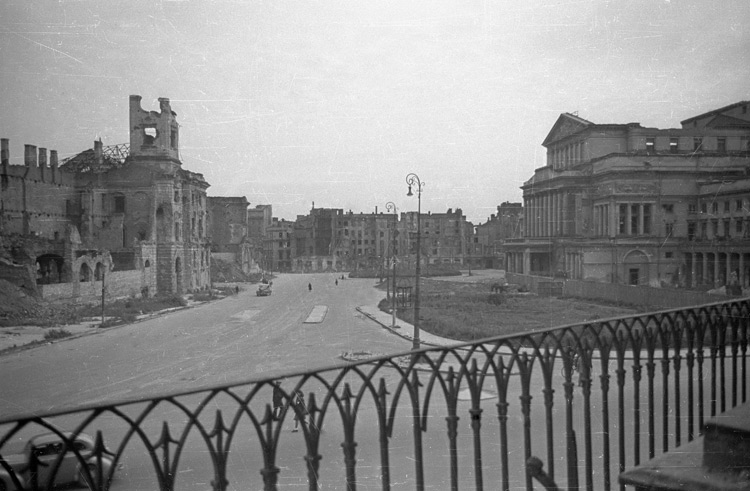 1940s. A shell of what it once was, it would take decades for Pl. Teatralny to be returned to anything like its current state…

Heavily bombed during the 1939 Siege of Warsaw, the building faced further catastrophe five years later when the Warsaw Uprising broke out. Intense fighting left it little more than a shell, with the Nazis executing scores of prisoners in the rubble and ruins. Bohdan Pniewski, a man responsible for many of Warsaw’s pre- and post-war gargantuan constructions, was placed in charge of the rebuilding and expanded on the original. Reopened on November 19th, 1965, Pniewski’s redesign was well worth the wait: featuring the biggest theater stage in the world –
at least at that time – the revamped Wielki was lauded as state of the art. But… it wasn’t fireproof. In 1985 a blaze swept through it, and with the nation in financial meltdown it would take another eleven years for repairs to be concluded.
Supplanting that blip was the struggle to add the Quadriga envisioned in Corazzi’s original plans. His sketches had included a triumphal horse-drawn chariot bursting from the façade, but Tsar Nicholas I personally intervened to forbid such an addition. It wasn’t until 2002 that Apollo’s Chariot was finally unveiled: the Wielki was complete! 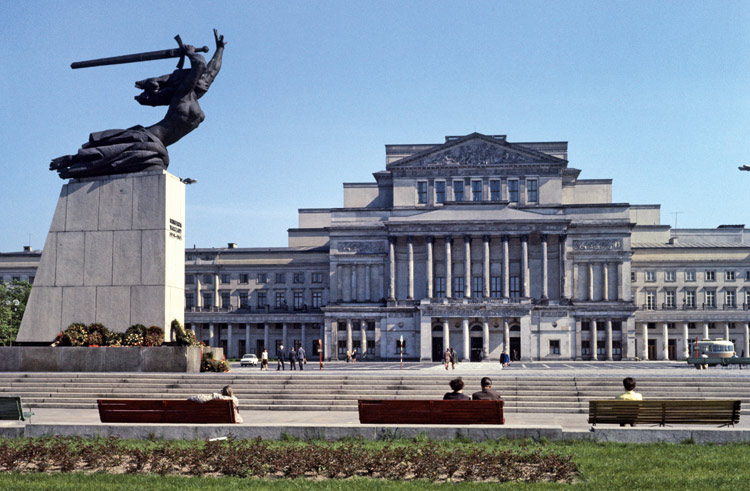 1970s: Now you see her, now you don’t! The statue of Nike is just one of Pl. Teatralny’s vanishing elements…

The war left Pl. Teatralny a wreck, but while many of the buildings framing it were reconstructed straight after, the town hall wasn’t. Really, if you think that ornate edifice with the pointy white tower is a little pristine, that’s because it is: work on resurrecting it only began after the collapse of communism. Prior to that, unbelievably almost, this was little more than a blank space occupied by an 11-meter statue of the bare boobed Nike. Unveiled in 1964, the sword-wielding Goddess stood there until 1997 before being carted to her current location by the W-Z tunnel nearby.
So, what of the elegant looking building that displaced her? First finished in 1785, it served as the City Hall up until the war. It was here that the mayor, Stefan Starzyński, led the defense of the city and recorded fire and brimstone speeches that rallied the population. Arrested in a Gestapo swoop following the city’s surrender, he was murdered soon after while in Nazi captivity. A cobbled walkway passes right through the tower, and it’s here you’ll find a stone tablet honoring his role. That’s joined by the outline of a former well, and numerous war-related plaques of the ‘they fought and fell here’ variety. Subtly illuminated at night, this narrow thoroughfare feels aptly solemn.
This air of sobriety is maintained in the church next door. Some sources claim it to be the smallest house of worship in the capital, though you wouldn’t guess reading its grandiose name: Kościół Środowisk Twórczych pw. św. Andrzeja Apostoła i św. Brata Alberta. Replacing a war-damaged church that was eventually torn down in 1953, this tongue twister was unveiled in 1999 and promptly consecrated by Pope John Paul II. Popping in through the glass doors, don’t be startled to stumble upon chitchatting spinsters engaged in a coffee morning. 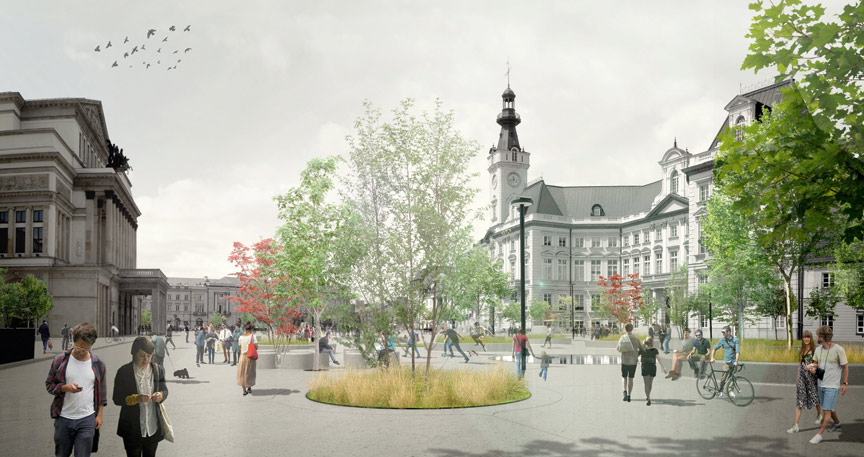 The Future
Staining an area that could otherwise become one of the calling cards of Warsaw, that car park has a lot to answer for. For years, architects have fantasized about taming this tundra, among them Aleksander Krauze and his colleague Nina Wójcicka. Speaking to the Insider, Krauze reveals the thinking behind his radical visualization of the Teatralny of the future:
“Warsaw needs a comprehensive rethink with regards to how its downtown functions – while redesigning Pl. Teatralny, we wanted to show how public space could look like in a city so dominated by cars. We wanted to demonstrate that an area currently used as a giant car park could become a sleek, modern space that complements the historical buildings around it.
When analyzing the square we found it to be very large – perhaps too large. In reorganizing it we delicately divided it into smaller fragments: in the middle, we positioned a ‘free space’, a convenient square in front of the National Opera that would allow for the organization of outdoor events. On the eastern and western part of the square there are elements of greenery, water and urban furniture. Then, in the central part, there’s an underground car park – its area is limited so that trees can grow naturally in the ground.
We decided that public space should speak the language of modern aesthetics. In Warsaw, when talking about the revitalization of historic areas, stylized fixtures and flooring always appear. We wanted to change that. In our opinion a minimalist, elegant design is the best background for historical, monumental buildings.
Why did we pick Pl. Teatralny for our project? Put simply, it’s a very important square in the overall structure of the city. It’s the home of the National Opera, which in the evenings attracts visitors from all over the city. But theatergoers approach it from the side to get to the entrance, even though only a few people park on the square in front. We dreamed of creating a vibrant place with a distinctively elegant and artistic atmosphere suited to the Opera.
Of course, our project is to some extent a dream; a condition that we would like to see achieved. But the improvement of public space in Warsaw requires coordinated action throughout the city center and, perhaps, even more broadly. I’m afraid that the square will remain in its current state for a long time: I’m afraid that the entrance to the National Opera will continue to be a parking lot hemmed in by a three-lane street. I’m afraid we’ll continue to look at shoddy pavements dotted with accidental flower pots. In brief, I’m afraid that nothing will change…” 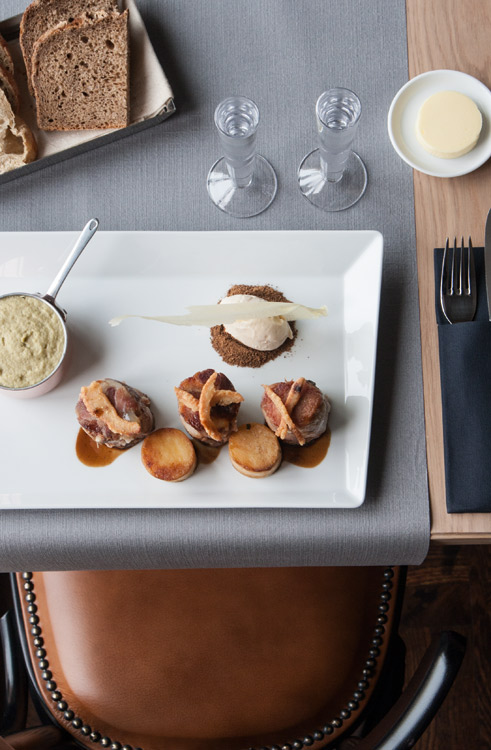 Elixir by Dom Wódki
ul. Wierzbowa 9/11,
domwodki.pl
Turn right to enjoy 250 artisanal vodkas both in their raw form, or in cocktails mixed by genuine bar talents. Or go left, for the restaurant, a place that modernizes Polish cooking with sensational results.
El Popo
ul. Senatorska 27, kregliccy.pl
Standing since the 90s, El Popo remains a benchmark for Mexican restaurants around town. Buzzing at night, don’t be surprised to find ballad-singing Mariachi men appearing at your table.

Opera
Pl. Teatralny 1, operaclub.pl
A labyrinthine club filled with seductive private chambers. It’s a while since it was regarded as cream-of-the-crop, but the audience is attractive and international.

Resort
ul. Bielańska 1
With a design that incorporates salvaged shopping trollies and street signs, the recycling theme is taken to the limit in this popular bar.

Sakana
ul. Moliera 4/6, sakana.pl
Brush shoulders (literally, it’s tiny) with Warsaw’s pretty things in what remains known as one of the top sushi spots about.

Senses
ul. Bielańska 12,
sensesrestaurant.pl
Some speak of it as a Michelin star in the waiting, and after trying Andrea Camastra’s innovative cooking you’ll understand why. Reservations (and an expense account) are recommended.

Sketch
Pl. Piłsudskiego 9, sketch.pl
Warsaw’s snottiest tap bar draws an immaculate and occasionally obnoxious crowd that’s a complete contrast to the craft beer bars downtown. The prices are inflated, but most have fun.

Metropolitan
Pl. Piłsudskiego 3
Too numerous to list individually, the Metropolitan building is a goldmine for the luxury shopper: from designer clothes to statement watches to fountain pens that cost more than a small car – find them here.

Moliera 2
ul. Moliera 2, moliera2.com
Regarded as one of the top fashion stores in the city, with an updated stock that includes the latest lines from the likes of Valentino, Louboutin and Marant.

Puppy Star
ul. Niecała 7, puppystar.pl
You know those glam girls who carry yappy dogs in their handbag? This premium-priced salon and boutique is where they shop for their pooch.

Odds & Ends
Metropolitan
Pl. Piłsudskiego 3
Designed by Sir Norman Foster, the donut-shaped Metropolitan building is a great example of modern Warsaw’s architecture: loved by some, loathed by others. Even the detractors agree the courtyard fountain is a cool, little feature.

National Theater
Pl. Teatralny 1, teatrwielki.pl
The seat of both the National Opera and the National Ballet. Compared to Western levels, the prices are ludicrously affordable: even if you’re not the traditional ‘theater type’, at least visit once.

Senator
ul. Bielańska 10/12
Marrying history to the modern, this gleaming office compound is connected to a bullet-pitted building that was once the Warsaw branch of the Imperial Bank of Russia. Several original details can still be spotted.

The Wave
ul. Moliera 8
Sneak into the courtyard to view one of socialist Warsaw’s wackiest apartment blocks. Resembling a 3D version of Tetris, this 70s residential complex is one of the city’s true courtyard secrets.