With 2020 finally in the bin, we sort through all our accumulated junk to present to you a time capsule that captures the spirit of this most memorable of years.

It Never Happened!
It was all mapped out – 2020, we predicted, was going to be a real year to remember. Well, we sure got that bit right, only for all the wrong reasons. Nevertheless, with all fun cancelled until further notice, we have at least a rich bounty of promotional posters for events that never happened to stuff into our time capsule: from beer festivals, concerts, club launches, etc. 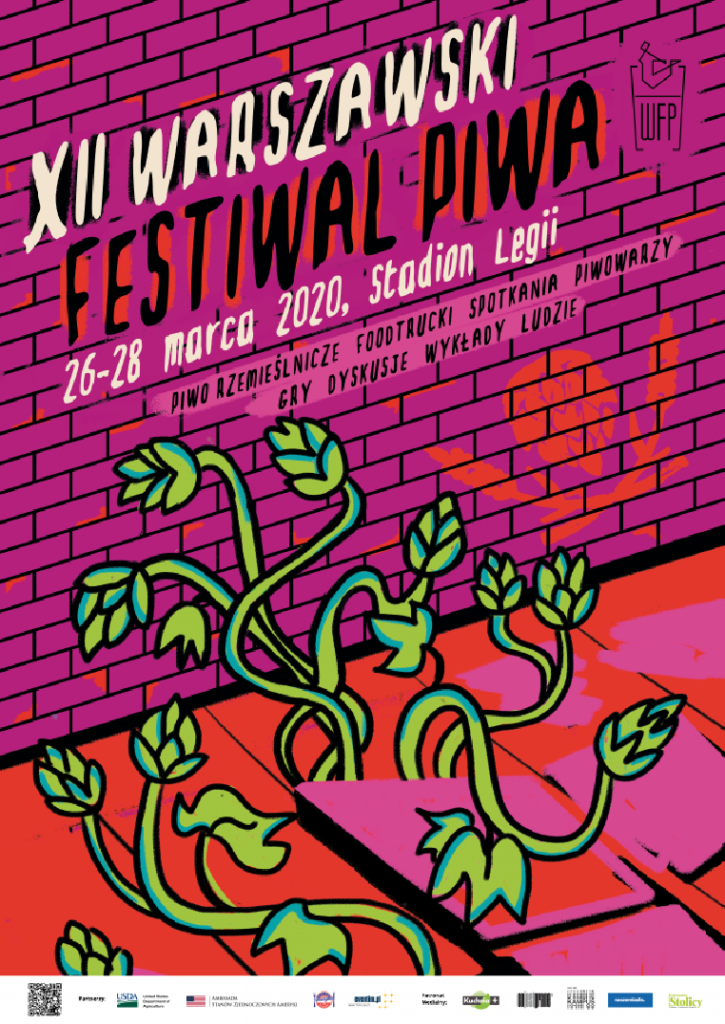 Rainbow Bag
There’s some countries in which a rainbow-colored bag would be seen as a light-hearted expression of individuality; perhaps a way to stand out from the concrete urban background. Not Poland. Now inexorably linked with anti-government protest, this seemingly benign accessory became the subject of front page scandal after masked cops were seen manhandling a grandmother who they alleged had “assaulted” them with just such a bag during a November rally. 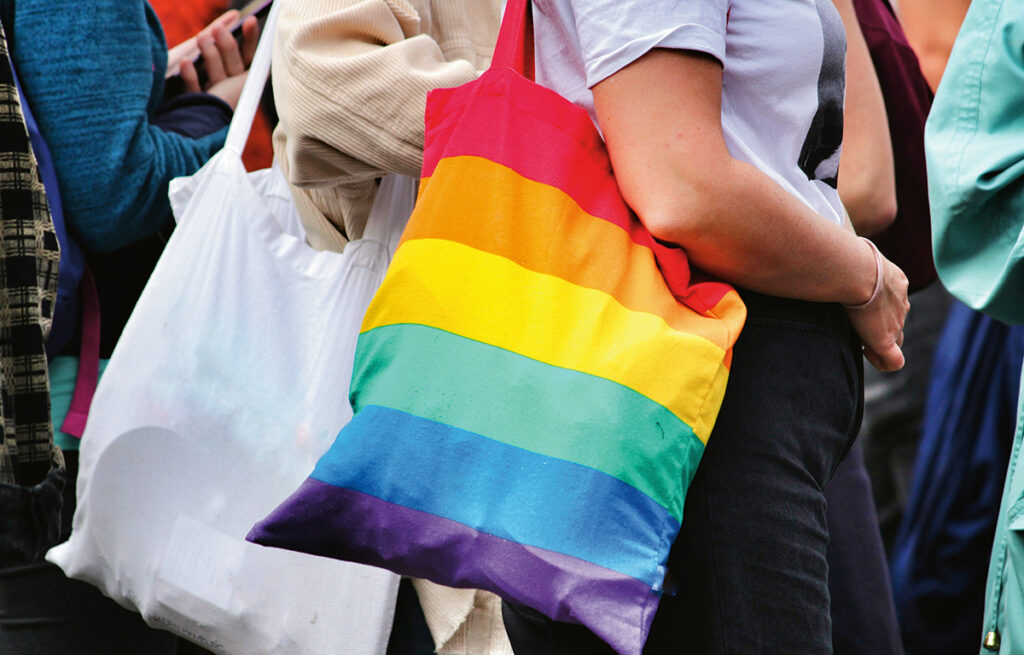 Rainbow In History
This isn’t the first time a rainbow has sent locals loopy. Once found straddling Pl. Zbawiciela, a nine-meter tall rainbow composed of 23,000 artificial flowers sent traditionalists apoplectic with rage after debuting in 2012. 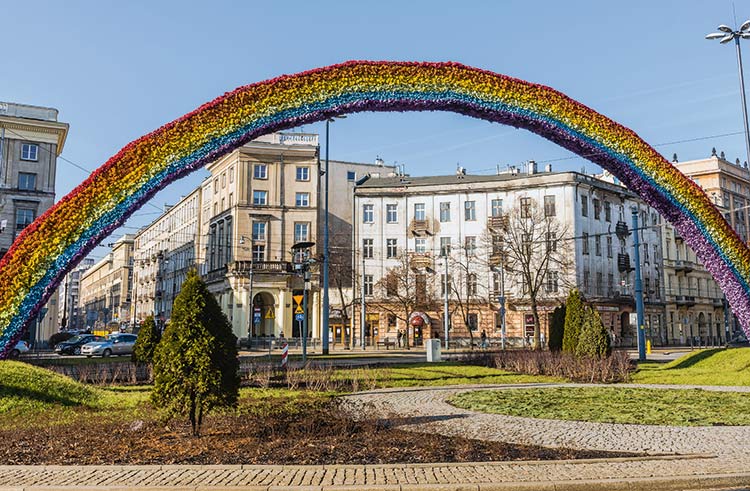 Decried by some clerics as “a symbol of deviancy”, it was set on fire seven times in all, most notoriously during the 2013 Independence Day riots. Coinciding with the area’s heyday – a time which saw it unofficially renamed Pl. Hipstera – the installation was dismantled once and for all in 2015.

Protest Placard
Teachers, taxi drivers, farmers, miners… and that’s before you get onto the pro-EU lobby and, well, women in general. The year just gone saw a swell of strikes and protests, many of which left the streets of the city center mired in gridlock. With this in mind, what would our time capsule be without a placard shouting for truth and justice: power to the people! 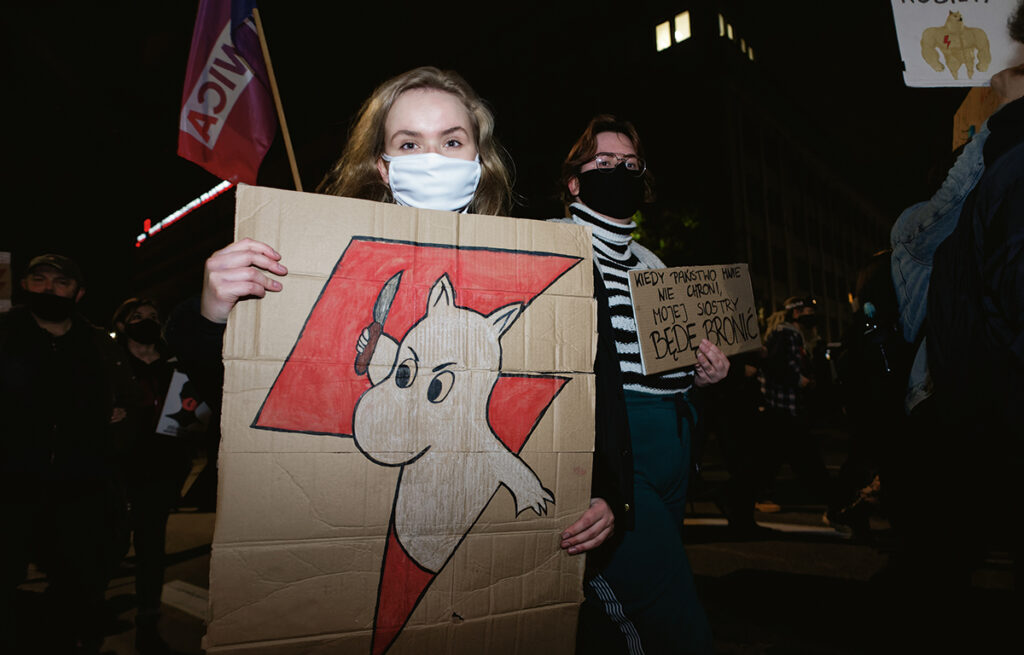 Toilet Roll
Nothing said 2020 more than the serious business of hording toilet paper. Yep, if we originally chortled at YouTube vids of pillocks brawling over loo roll (“don’t be daft, that’ll never happen here!”) then we were the first to clear the shelves once the pandemic hit Poland. Fortunately, with the domestic bog roll industry worth zł. 1.6 billion annually, early shortages proved but a fleeting issue. 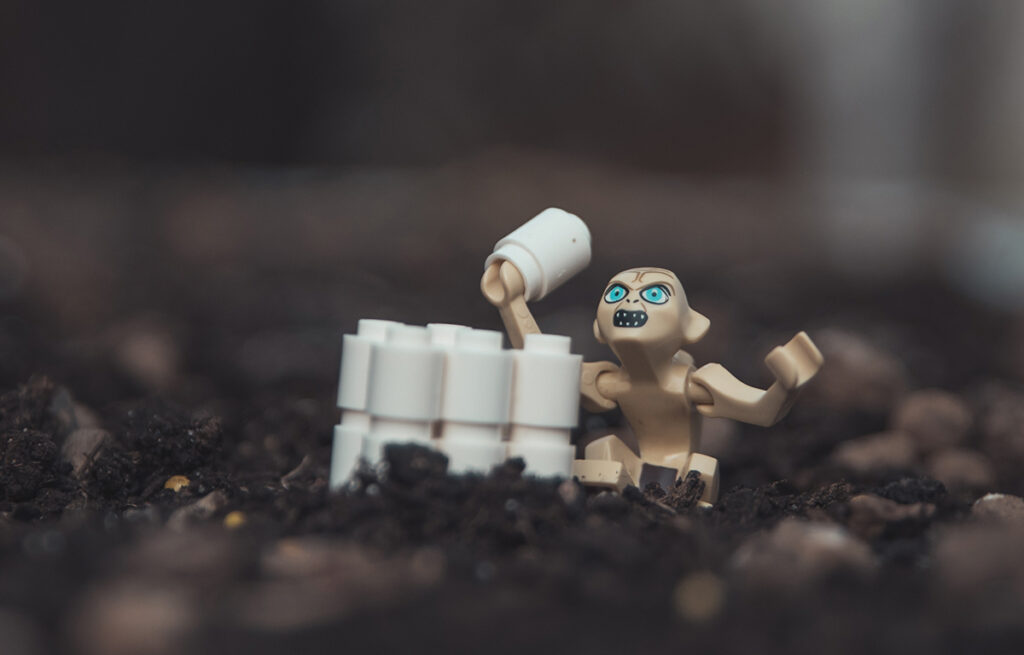 Toilet Rolls In History
Toilet paper shortages ain’t nothing new. During the Communist era they were the defining (t)issue of the day: the situation had become so desperate that those living in Warsaw were said to make do with just seven rolls per year – and they were the lucky ones. In Radom, it’s rumored that residents had to survive on the equivalent of two meters of paper over the course of twelve months. Seen as something of a luxury product, when deliveries of stock finally arrived those at the head of any queue could often be seen excitedly leaving with a string of rolls tied like flowery garlands around their neck.

Pizza Box
When Covid first sank its bat-like fangs into Poland, the restaurant industry responded by unleashing an assault of home delivery options on us. But let’s be honest, for all the fine-dining-to-your-door, it was the good old pizza that we all loved the most. In fact, we did so even before the coronavirus reared its head: as early as Feb, Rzeczpospolita had declared the food as Poland’s “new national dish”. 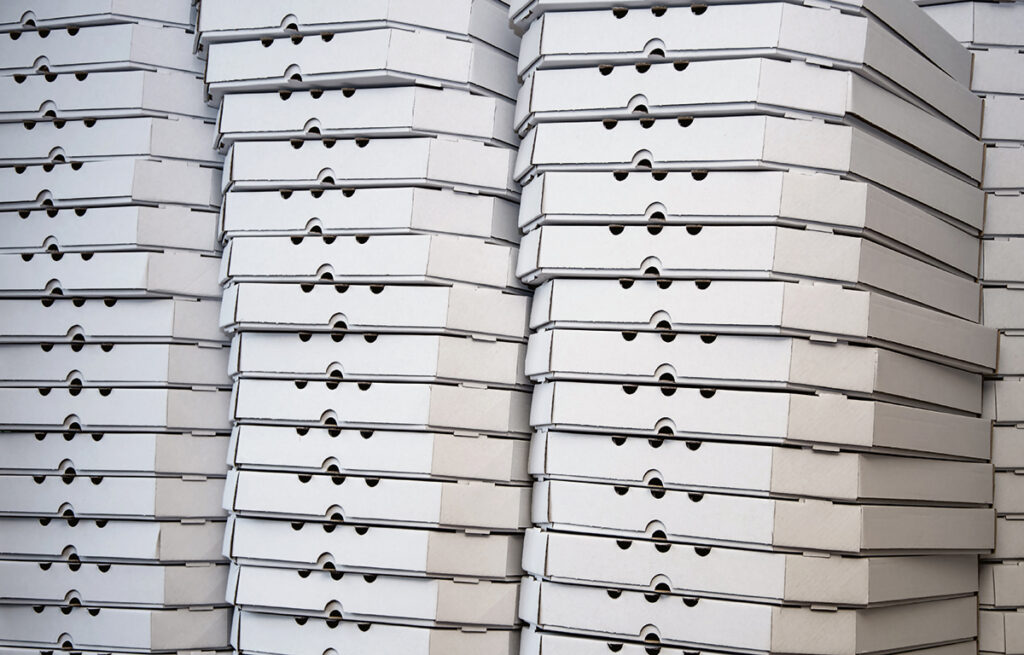 Pizza In History
Although Poland’s first pizzeria didn’t open till 1974 (in Słupsk, if you ask), the dish was already well-known in the country having been introduced to tables in the 16th century by Queen Bona Szfora. In fact, in 1518 it was even served at her wedding to Zygmunt I. That’s not all; Bona is also credited with bringing over numerous other gastro treats from her native Italy, including cucumbers, leeks, cauliflower and carrots.

Flares
Whether it be public or private, no event in Poland is truly complete without a volley of pyrotechnics to really underscore the red hot atmosphere. 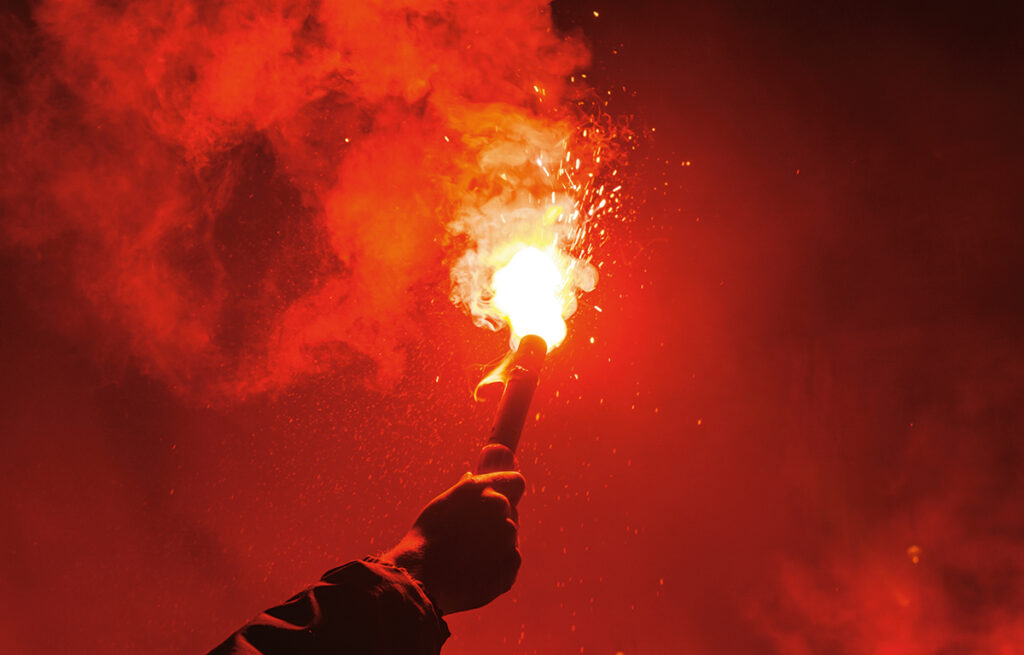 Enthusiastically fired at everything from funerals to football matches, they’ve become particularly prevalent at the manifestations and marches for which Warsaw is famed for – embraced by both sides of the political divide, protests and parades just aren’t the same without the sight of billowing red smoke enveloping the masses in a thick fug of smoke; and let’s face it, we saw plenty of both in the year just gone.

Face Masks
Remember that acute feeling of social embarrassment the first moment you strapped on a mask? Well, here we are ten months on with more masks in our closet than spare pairs of underpants. That they would become an essential and mandatory accessory still feels all a little bit bizarre. Remember what your friends looked like without them?

Face Masks In History
That we wear these things in the first place is largely the work of a Pole: known for his work at Jagiellonian Uni in Kraków and the University of Breslau (today’s Wrocław), 19th century surgeon Jan Mikulicz-Radecki is commonly regarded as one of the original pioneers of the surgical mask. Good work geezer!

Hand Gel
It wasn’t just the toilet paper that ran out when the first lockdown was announced, hand gels too became a quasi-currency. With shelves stripped bare, Poles again showed their ingenuity by magicking their own homemade sanitizers based on rectified spirits and squirty aloe vera.

Paper Money
Bank notes – remember them? The fear of transferring yucky germs made contactless payments de rigueur, and with cash becoming a memory of the past, so too did the image of customers scrabbling around purses and wallets to pay angry shopkeepers with exactly the right amount. 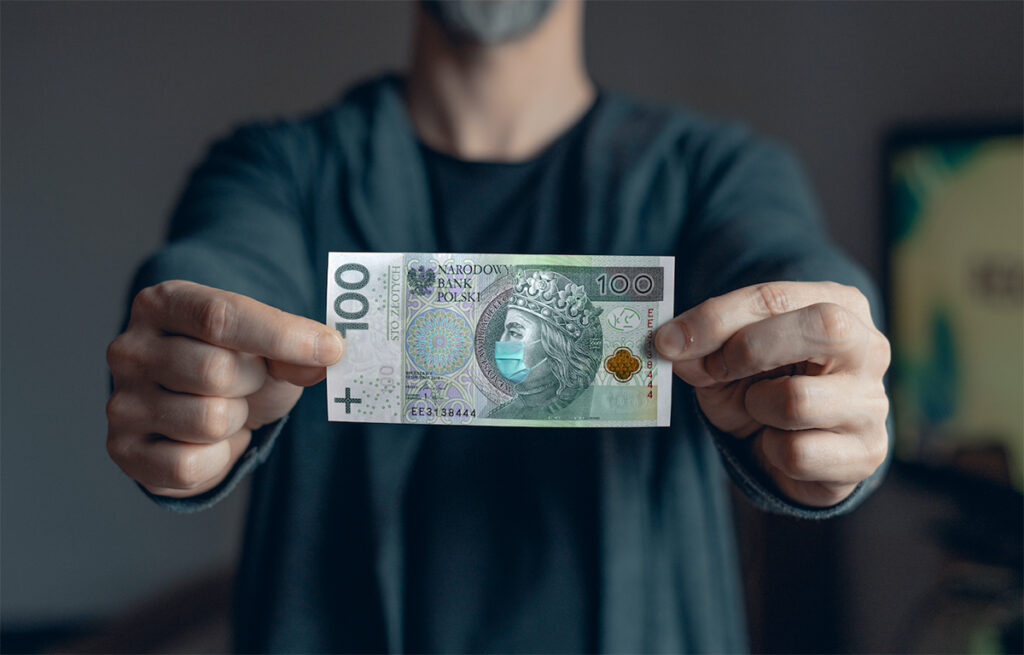