Traces of the Uprising

No single event in Poland’s history comes close to matching the tragedy, heroism and ultimate futility of the Warsaw Uprising. With the anniversary falling on August 1, the Insider traces the ghosts of the past.  BY ALEX WEBBER

Turned, in the words of Norman Davies, into a “lawless laboratory of Nazi racial ideology,” wartime Poland was a dark place to be – and Warsaw darker still. Seen as a symbol of Polish independence, and a breeding ground of dissent and decadence (not to mention Judaism), the Nazis hated the capital with an unrivaled passion. Yet being second class citizens in their own country wasn’t something the Poles were to take lightly. Europe’s largest underground movement was swiftly born – illegal newspapers thrived, secret university classes held and aid distributed to those in need. The real feather in the cap was, however, the formation of the Home Army (AK to the Poles), a clandestine military movement made up of scouts, police and soldiers who had fought during the initial invasion.

After years of waiting, the AK finally sprang to arms on August 1, 1944. Their aim, to liberate Warsaw in time for the imminent Soviet arrival. What happened next was to shape the nation. Allied aid failed to materialize in the promised manner, while the Red Army stood impotently on Warsaw’s right bank. Nevertheless, Warsaw’s outnumbered insurgents fought valiantly for 63 days, in a brutal conflict that would claim nearly 250,000 lives.

Yet even taking into account these figures, commemorating the doomed Rising didn’t figure highly in post-war socialist ideology. Quoting Norman Davies, it was seen as the work of “criminal, anti-Communist adventurers,” and the heroics of the insurgents was airbrushed from history. This has of course been rectified since the fall of the Iron Curtain, and Warsaw now sags under the weight of statues, memorials, museums and plaques. But these aside, Warsaw’s talent for throwing up the unexpected exceeds itself when it comes to the Uprising, and the city is filled with lesser known landmarks.

Following the capitulation, and the forced exile of the remaining civilians, Himmler ordered for “every house to be blown up and burned,” a task carried out with unflinching dedication. By the time Soviet troops entered Warsaw on January 17, 1945, the capital lay under 20 million cubic meters of rubble with total destruction measured at 84%. In the post-war years a new city emerged, one to replace the city that had been killed. Yet, in spite of the sheer scale of carnage, elements and evidence of the Rising survive to this day – some obvious, others not so.

In the center, it’s doubtless you’ll already be familiar with many of the landmarks. Take, for instance, the Prudential Tower (1) on the corner of Świętokrzyska and pl. Powstańców Warszawy. Ranked Europe’s second tallest skyscraper when it was completed in ’34, it became a key target for the insurgents and was captured on Day 1 of the Rising, with the photograph of the Polish flag flying from the transmitter regarded as one of the iconic images of the battle. While the building was smashed and gutted by over 1,000 shells, it remained standing… just. After the war it was reconstructed in socialist style, and would serve travelers as the Hotel Warszawa until 2003. Empty ever since, work is afoot to transform it into luxury accommodation.

Yet while Prudential was Warsaw’s tallest skyscraper, it wasn’t her first. That was the PASTa tower on Zielna 39 (2).  Now home to the Veterans Association, the sixty meter tower was originally a telephone and communications exchange, and hence another goal for the AK. It took twenty days for the insurgents to wrestle control from the Germans, and it remains an important point on any Uprising tour. As is the former National Bank on Bielańska 10 (3). Once slated to house the Uprising Museum, only one shattered wing survived, and after years of lying empty the structure is now in the hand of the developers. That’s more than can be said of Waliców 14 (4), a huge tenement that looks like it was bombed about four days ago – crumpled and crumbling, it’s a sinister piece of real estate that dramatically captures the Warsaw of ’44. 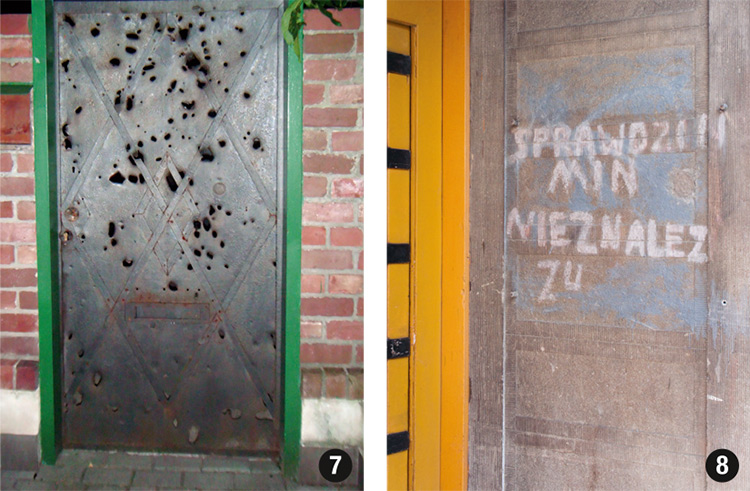 While the historic center was meticulously rebuilt, traces and reminders of the battle are by no means infrequent. Three bullet holes have been left as they were on the street sign marking Skwer Mickiewicza (5), while further down the original column on which King Zygmunt (6) once stood can be found lying on its side on the south flank of the Royal Castle. Even the Cathedral wall features tank-style tracks recovered from a Goliat – a remote controlled German mine used with deadly results during the struggle. Indeed, anyone doubting the ferocity of the fighting would do well to take a look at the information board on ul. Zapiecek. Showing an aerial view of the post-war devastation, the black and white scene depicted could be confused with Hiroshima. And don’t think it was just the center that took a battering. Down in Mokotów, close to where ul. Krasickiego and Naruszewicza intersect (7), an iron garden gate stands as proof of the savagery – ripped apart with bullet holes, it’s one of those sobering sights you won’t find in guidebooks. 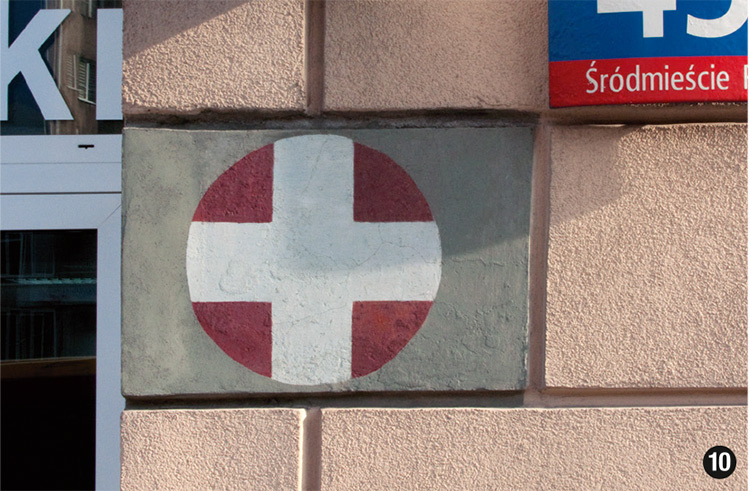 In the wake of the Uprising, the Germans laid tens of thousands of mines and booby traps; by mid-March, 1945, over 100,000 mines had been neutralized alone. Signs alluding to this menace can still be seen – like for instance at Grójecka 41 (8) and Narbutta 3A (9). In both cases, announcements painted on the walls declaring the area ‘mine free’ have been glassed over and protected by the city authorities. And those aren’t the only remnants of war you’ll find on the walls of Warsaw. Look closely at the doorway on Tamka 45 (10) and you’ll make out a red and white cross painted by the entrance; in ’44 this innocuous building was used as a dressing station for those serving in the ‘Bicz’ company which operated nearby. 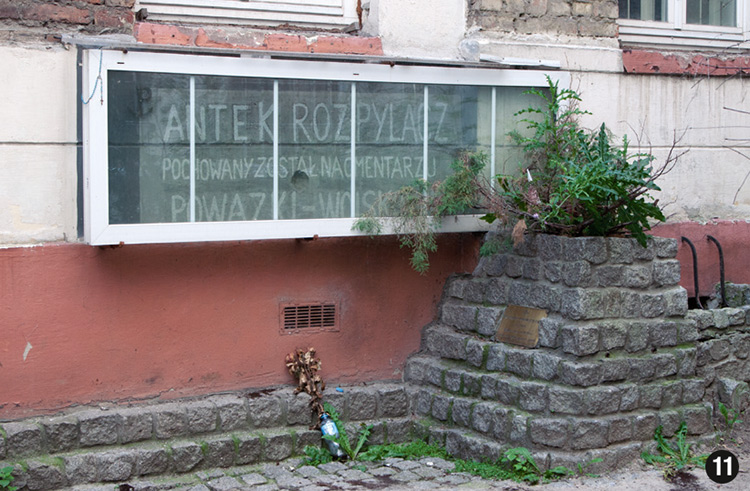 Back into the center, and the shadowy courtyard on Bracka 20 (11) hides a horizontal, glass case covering some thick, white lettering. Painted after the war by his mother, the text reads, “Antek Rozpylacz is now buried in Powązki Military Cemetery.” Killed in combat on August 8th, Rozpylacz (real name Antoni Godlewski), was originally buried in this gloomy backyard, and a small memorial stands next to his mother’s words. 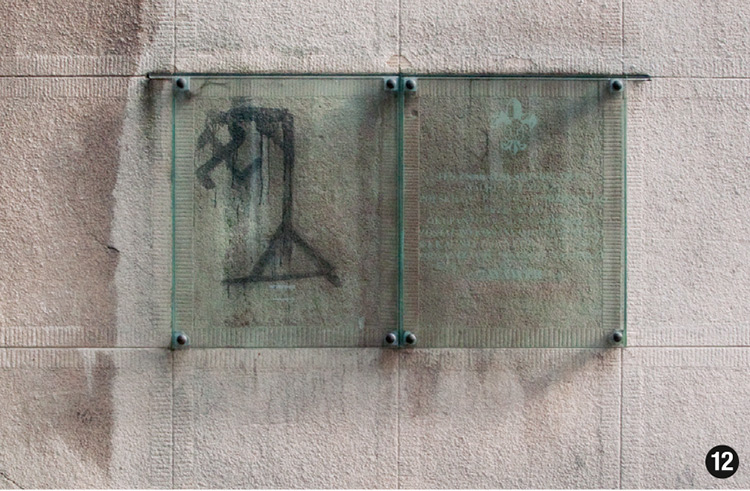 Of course it’s not just signs of the Uprising that have survived either, but also sights reminding of the occupation. The wall of Niepodległości 130 (12) (walk down the side street on ul. Ligocka) bears a swastika hanging from a gallows. Dating from 1942, it’s believed to be the work of a sabotage group made up of scouts. The German contribution to Warsaw is also on show. Grope around the courtyard of ul. Bracka 20 (13) and you’ll find a communications box high up on the wall as you enter to your right. Bearing the legend ‘Reichspost’ it seems almost unfathomable that such an artifact exists to this day.

Astonishingly, discoveries are still being made. Only recently a Nazi ‘Tobruk’ style bunker was unearthed while workers were re-laying tramlines on pl. Zbawiciela. While that’s been moved for display elsewhere, another concrete pill box can be found not far from Politeknika on ul. Nowowiejska. But if you’re actually looking for the opportunity to clamber inside, then head no further than the Uprising Museum (14). Snoop behind the office and  visitors will come across another Tobruk – weighing fifty tons, it was cut into three pieces before being lugged to its current location. So it seems, with the 3,000 living veterans reaching the end of their lives, evidence of their sacrifice burns stronger than ever.