Warsaw is in the grip of a food revolution, with top chefs afforded the status of Mayan Gods and glittery openings each and every week. Yet before the capital embraced global trends, the predominant cuisine of choice was rather less exotic: the social and cultural changes of the 90s produced one runaway winner in the restaurant sector, and that was Italian. And to this day, it remains one of the dominant cuisines on the local scene – in fact, it’s easier to think of a street that has an Italian restaurant, than one that doesn’t.

Clearly, this is not a passing fad. But this is not the good news that you may think it is – Italian restaurants may be hefty in number, but on the whole they’re ruled by atrocious chefs who have Polonized the cuisine: kitchen criminals who deserve public humiliation. So yes, Warsaw needs as many good Italian restaurants as it can get, which is why Trattoria da Antonio is a welcome addition. 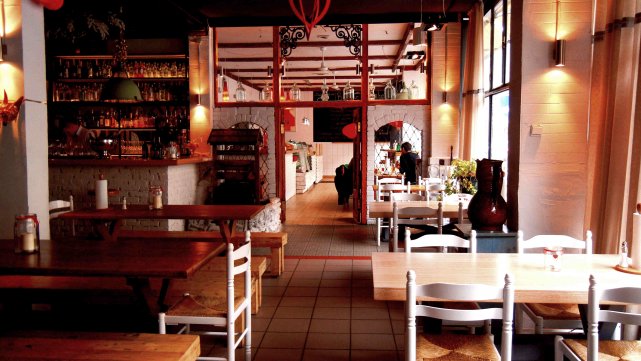 The Place: huge. There’s a simple, rustic style that never feels boring thanks to generous embellishments that appear at every turn: a vespa, stone lions, a water well… In this respect the design feels like a 90s caricature, far removed from the sharp, urban style that’s now flavor of the month. But this is no bad thing – by reverting to such a style they’re a jaunty contrast to Warsaw’s copycat venues.

Atmosphere: love was definitely very much in the air when we visited for lunch, with Valentine’s decorations hanging prominently, and Eros Ramazotti seemingly singing for his life. Again, cliché, but a welcome one.

The Chef: is Sicilian-born Antonio Centurrino. Married to a Pole, his history with Warsaw stretches back quite some time: you may remember him from places like Verona and Pappa Grappa.

The Service: immediately likeable – knowledgeable, non-intrusive and ready with suggestions, our waitress stood out for her warm and honest approach. 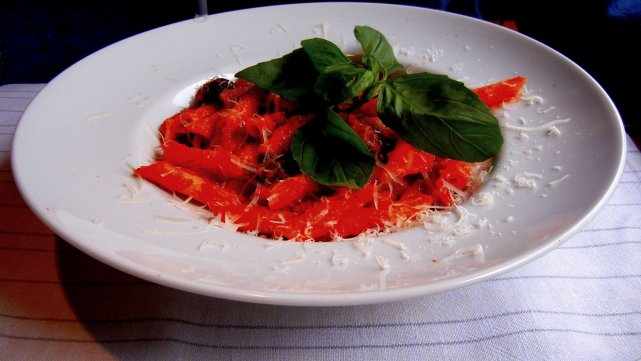 The Menu: is a little unwieldy and would benefit from being slimmed down. But, that’s more the fault of Italian cuisine for being so damned tasty rather than a sign that the chef has over-reached himself. From what we saw, he certainly hasn’t.

The Meal: begins with homemade bread, the highlight being a piping warm bun lathered in a rich tomato sauce. For starters, I went for a straightforward tomato soup: decent, but lacking the depth I’d usually expect. Mains, though, earned a straight string of A’s. The penne arrabiata was delicious in its simplicity: fresh pasta and a perky sauce with a nice hint of spice. Also successful was my gnocchi tartufati: gnocchi stuffed with parmesan, ham and turmeric, and served in a thick cream sauce. This was melt-in-your-mouth good, a dish capable of silencing my girlfriend on account of its greatness. Dessert was a shared affair of meringue layered with ice cream and complimented by a drizzle of hot cherry sauce. Full we might have been, but it went in seconds, demolished in the style of a competitive eater. 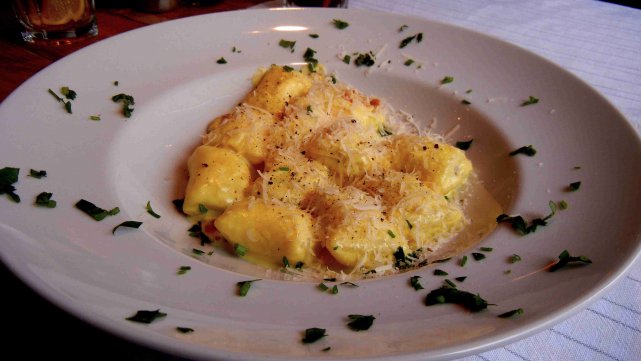 The Price: One starter, two mains, one dessert and a couple of soft drinks – zł. 127. Not at all bad for an area that’s increasingly on-trend.

Good to know: my opinion of children in restaurants is that they should be smacked on the head with a very heavy hammer. At Antonio though rampant devil toddlers are kept quiet by segregating them in a brilliant playroom that tickles you with envy – restaurants weren’t like that when I was a three year old git.

Overall: very happy with the meal, the experience, the staff and the price. This isn’t fine dining standard, but then it doesn’t purport to be – it’s what it says on the tin: a warm trattoria that places primary importance on good, simple food.