alternative89 environment16 family80 travel46 weekend132
BY ALEX WEBBER | PHOTOS BY ED WIGHT Escaping from Kiermusy isn’t impossible, but it’s certainly quite tricky. The problem isn’t so much the...

Escaping from Kiermusy isn’t impossible, but it’s certainly quite tricky. The problem isn’t so much the grunting animals that occasionally incur onto the narrow road out, the problem, I’ve found, is myself. I don’t want to leave. Why would anyone? This is, after all, the kind of place that changes your perception of time. You view it differently. After a while, time grows to become a desperate jumble of meaningless numbers. 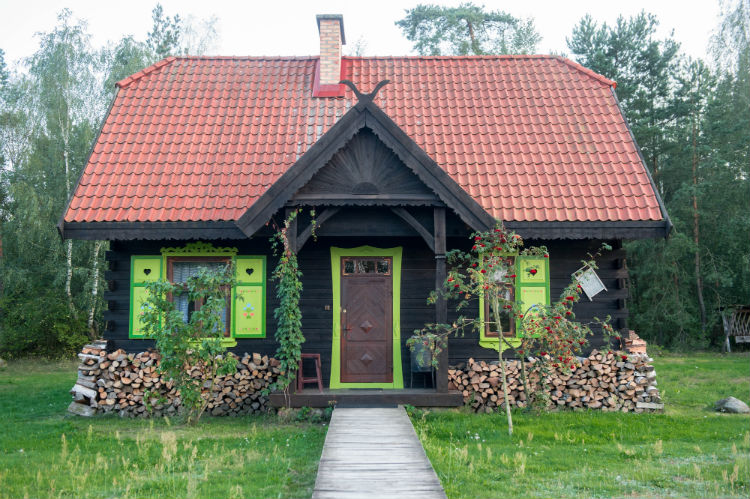 Rugged forest on one side, rolling green meadows on the other, Kiermusy leaves GPS systems paralyzed with panic – even calling it a hamlet would be an ambitious fancy. Cast out in the backwaters of Eastern Poland, it has all the hallmarks of a classic rural break: big blue skies and the sense of total isolation. Of course, we are not completely alone: staff lurk inside the dark halls of the Rzym, the sturdy timber tavern in which check-in is conducted. Although the finer details are lost amid all the fur pelts and muskets, instinct suggests an atmospheric haunt where good things tend to happen. Later, we’ll learn that this suspicion is correct.

In the meantime, though, spirits peak as we make our way to the separate ivy-clad lodge that will serve as our home. The living room is all squeaks and shadows and chiming antiques, while our quarters upstairs have solid big beds and a vintage style: I’ve been here ten minutes and I love it already. A little surprisingly though, we’ve been told there is much to explore. Resisting the urge for a beer on the veranda, we embark on a tour. First, north, where a gentle trail leads us down an ‘Avenue of Oaks’ planted by eminent Poles. 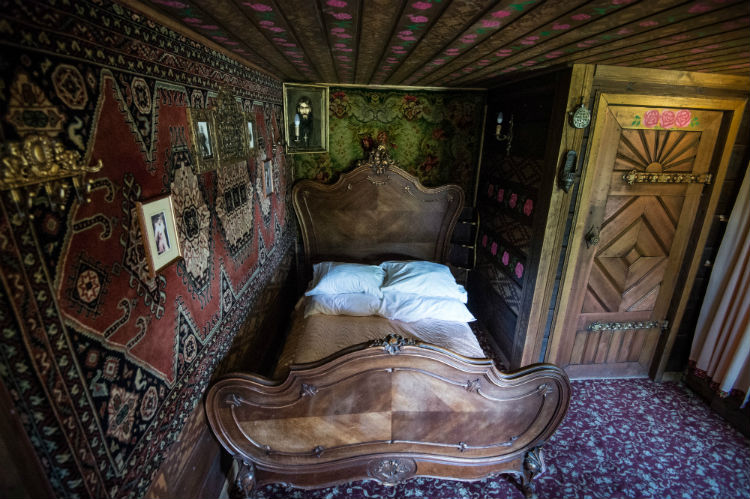 Eventually, the path opens out to face a thatched cabin perched by a lake. As if on cue, the door swings open and out of it exits a member of staff in country maid garb. This is Maja, and she explains that what we’re looking at is ‘the House of Rasputin’. We’re allowed to peer inside and find a voluptuous hut hung with tapestries and pics of erotic nudes and Tsarist aristocracy. In the corner, a portrait of The Mad Monk himself: his gaze is intense and seems to pursue all our moves. As a bedroom it’s unique, unsettling and utterly crazy. Frankly, I wouldn’t stay there alone. 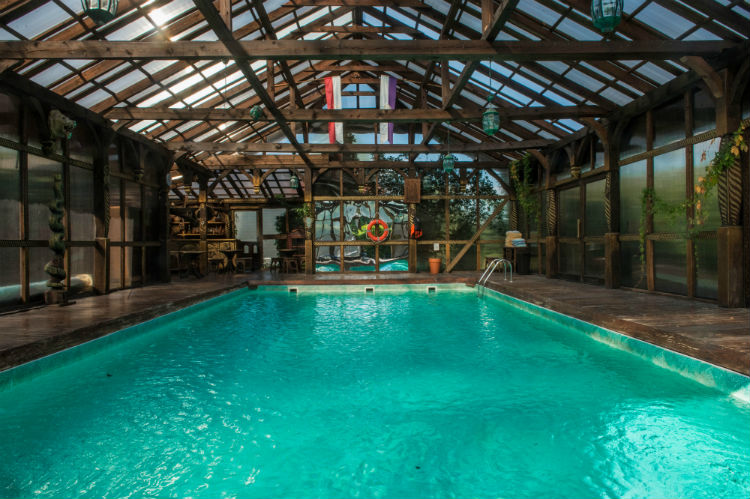 Happy to escort us around the rest of the complex, Maja shows us a barn, since repurposed as a glimmery pool, as well as the gorzelnia, a cobwebbed cellar that acts as a lads-only bonding cave. Strewn with splintered furnishings and dusty drinking paraphernalia, its purpose is simple: “men turn up with a crate of vodka,” smiles Maja, “and then stay locked down here until it’s all finished.” Hotels of Warsaw, take heed and follow. 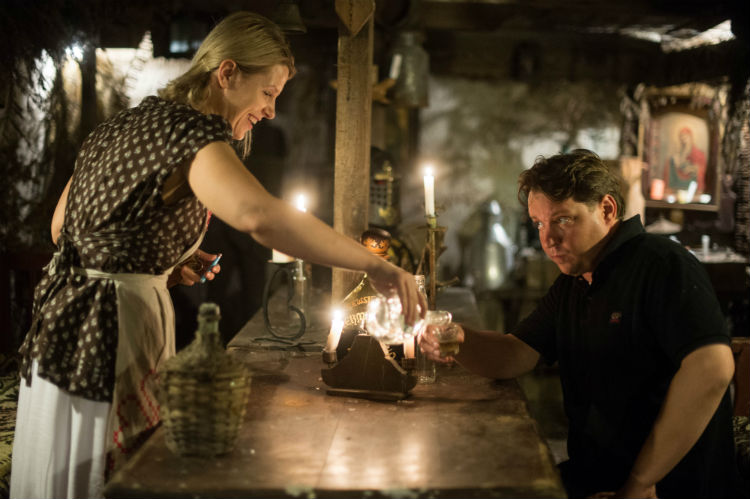 Back outdoors, we turn back on ourselves and head past a row of brightly painted cottages and towards Kiermusy’s bison reserve, a generous enclosure with a viewing platform that totters and trembles as we inch our way up. It doesn’t take long before creatures have congregated below us, munching, gurgling and doing other bison-like things. With the last of the September sunlight streaming through the trees, it’s a scene to soak up and savor. I want to bottle this feeling and store it forever. 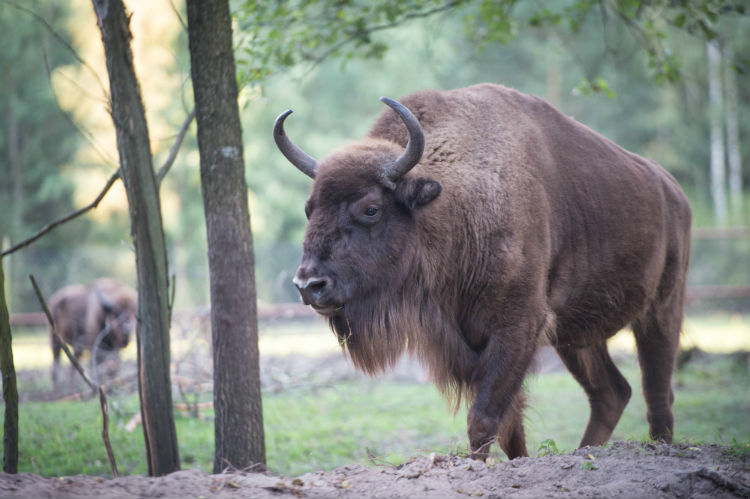 With dusk creeping in we return to the Rzym where we’re immediately informed that there’s been an unforeseen crisis. “The chef,” apologizes Maja, “went out picking mushrooms and hasn’t come back.” Hungry as I am, I like the sound of this – if it means fresh forest ingredients then I’m happy to wait. Bingo, it does, and when the food finally arrives we dig through heaps of local produce piled on wooden plates. I have never eaten this well in the back of beyond. 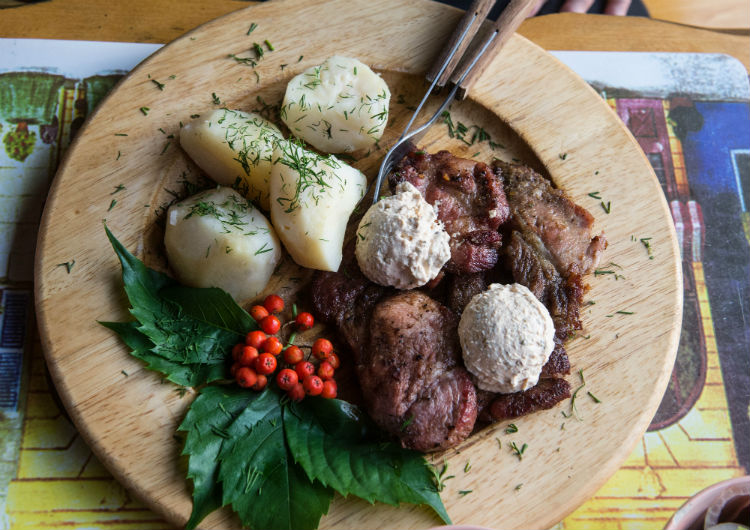 The food suits the moment as does mulled wine. We sink back jug after jug, before heading yonder into the night through the alley of oaks. In front, light mist, above, a sky deeply flecked by a gauze of stars. The silence is immaculate – so much so, I start talking to myself to check I haven’t gone deaf. But then, a loud splash and an ungodly howl. The photographer, who has been hanging back to babble to himself, has stumbled into a marsh. Staggering out, he then falls into an electrified fence: the scream echoes around the universe. Plodding back to the Rzym we find that the doors are locked and the lights are out. It’s an inglorious end to a wonderful day.

We recover our optimism in the morning. Under a baking sun we walk to the furthest end of Kiermusy. It’s here that a red and white barrier marks the ancient border between the Kingdom of Poland and the Grand Duchy of Lithuania. A stone’s throw away: a rebuilt fortress, its courtyard filled with medieval torture devices and grisly captions that are graphic in their description. Then, inside this bastion, three floors packed with sabers, swords and suits of armor. It’s like being a ten-year-old boy again and I enjoy every minute. 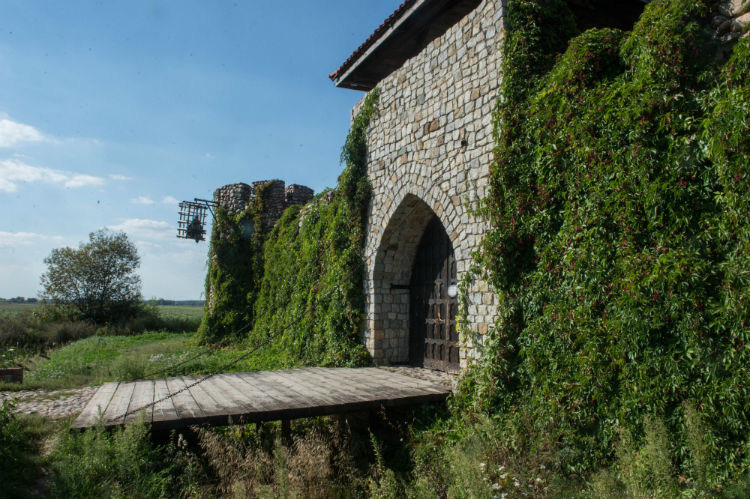 Out of curiosity, we break up the hike back with a stop at Stanica Rzeczna Łabędzie. This is the ‘other’ pension in Kiermusy, and despite being in competition with where we’re staying the relationship between both is cordial and friendly. Not that you’d expect anything less – the owner of Stanica, Jacek, embodies the spirit of Polish hospitality: a man of modesty and manners, he invites us inside for a whistle stop tour. Furnished with nick knacks from Kiermusy’s monthly antiques fair, his chalet is a smaller project but with a more upscale style. 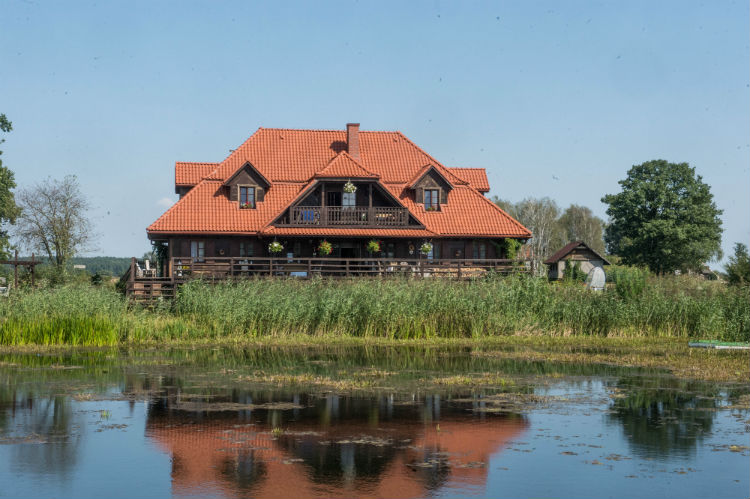 Seemingly built with sunsets in mind, the calling card is a lakefront deck where everyone gathers. Today that means a pack of romping animals and George, an 82-year-old Pole who could pass for 50: gold hair, gold chain, gold tan – everything about him glows gold. That goes for his personality, as well. Having fled the country with his family after the Warsaw Uprising (“I still remember all the bodies in the street”), life’s twisting path has led him to live in France, Canada and then the States.

Visiting Poland to retrace the places of his youth, he weaves beautiful stories full of poignant reflection: over coffee, he tells us how his childhood home in Mokotów was destroyed but, miraculously, the tree outside stills stands unscathed. “When I returned last week,” he confides, “I picked some apples from it. They were rubbish, but…” His voice trails off. In the distance, a tractor chugs by. Life carries on. Jacek pours another coffee and the conversation resumes on a far lighter note. In truth, I don’t want it to end. I don’t want any of this to end. 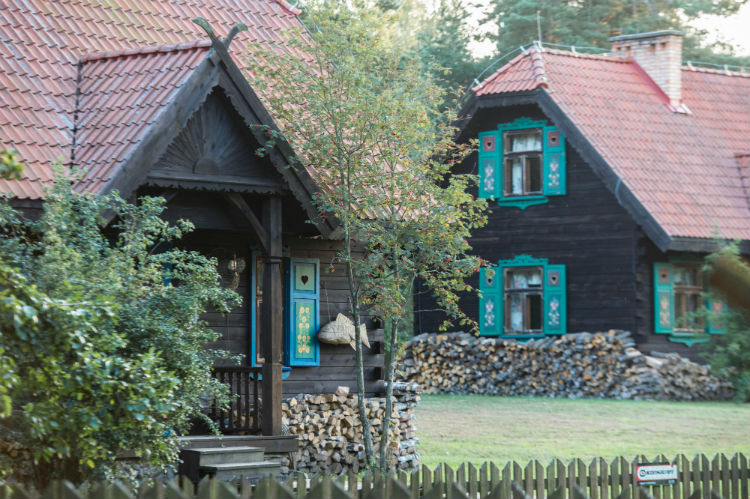 Need to Know
Getting there: Kiermusy lies 2 hours 30 minutes North East from Warsaw. Some do it in two. Or, do what the Insider did and take the train from Warsaw to Białystok. The journey takes 2 hours 20 minutes: first class is zł. 62 and second zł. 30. From there, a taxi comes to about zł. 175. It’s worth every złoty.