Ursynów: The Land of Murals

Forget Praga, it’s the southern ‘burb of Ursynów that has become the de facto capital of Warsaw’s mural movement…

If ever you’re caught in a word association game (hey, never say never), then the chances are that you’ll find the word ‘mural’ answered with ‘Praga’. That’s no surprise considering that for the last decade it’s been persistently drummed into us that the heart of Warsaw street art lies east of the river. But is that still the case? Certainly, Praga’s immense contribution should never be dismissed, but her dominance has flaked like her murals themselves.

Instead, more and more art hunters are shifting their sights to the other end of the city: Ursynów. Witness to an epidemic of ‘muralosis’, the city’s southern rump has seen an outbreak of XL wall art that has been breathtaking in its speed. In itself, that should have been expected for few sections of the city offer such a large, prospective canvas as this oft-overlooked suburb. To this extent, Ursynów’s very background provides cause for inspection. 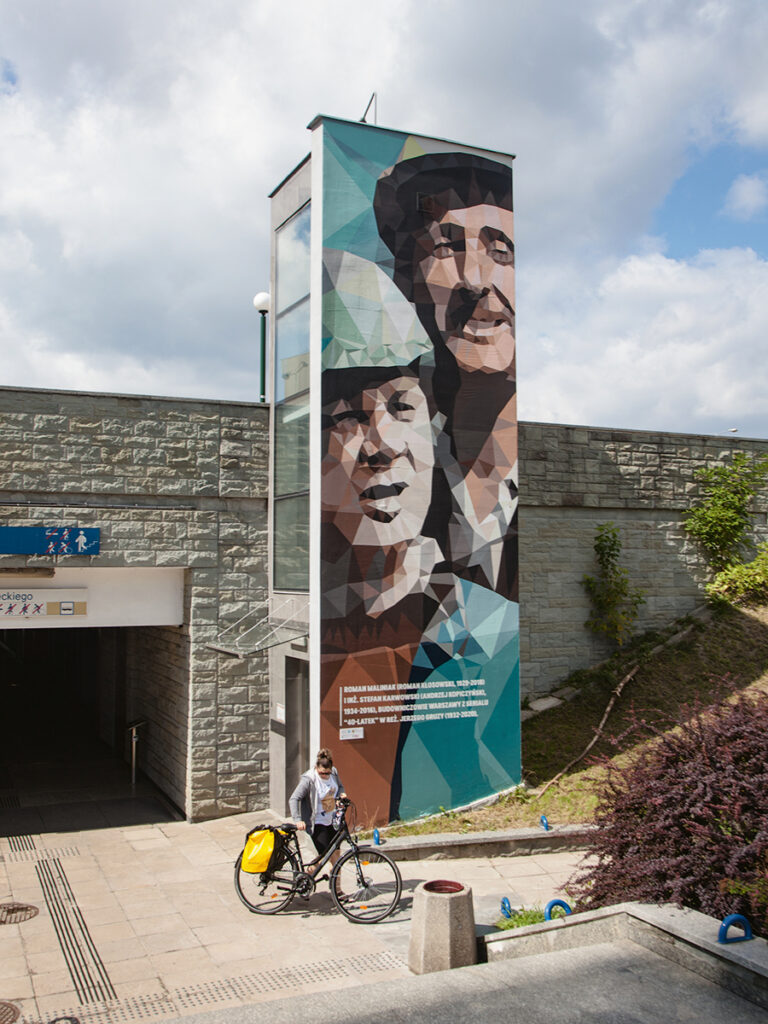 Incorporated into Warsaw in 1951, until then the area had been little more than a collection of villages such as Kabaty, Imielin, Pyry and Moczydło. When WWII broke out, a sum total of fewer than 3,000 people lived in the entire district. This, though, was soon to change when the government embarked on a flagship investment to construct a suburb capable of housing 100,000 people inside pre-fabricated blocks.

Beginning construction in 1975, such was the project’s value that the Communist leader, Edward Gierek, visited workers in 1977 to personally praise their labors. But what sprung up was not free from criticism and many noted its “omnipresent ugliness” and “disastrous quality”. In part, this was in no small degree down to the habit of employing prisoners as construction workers. 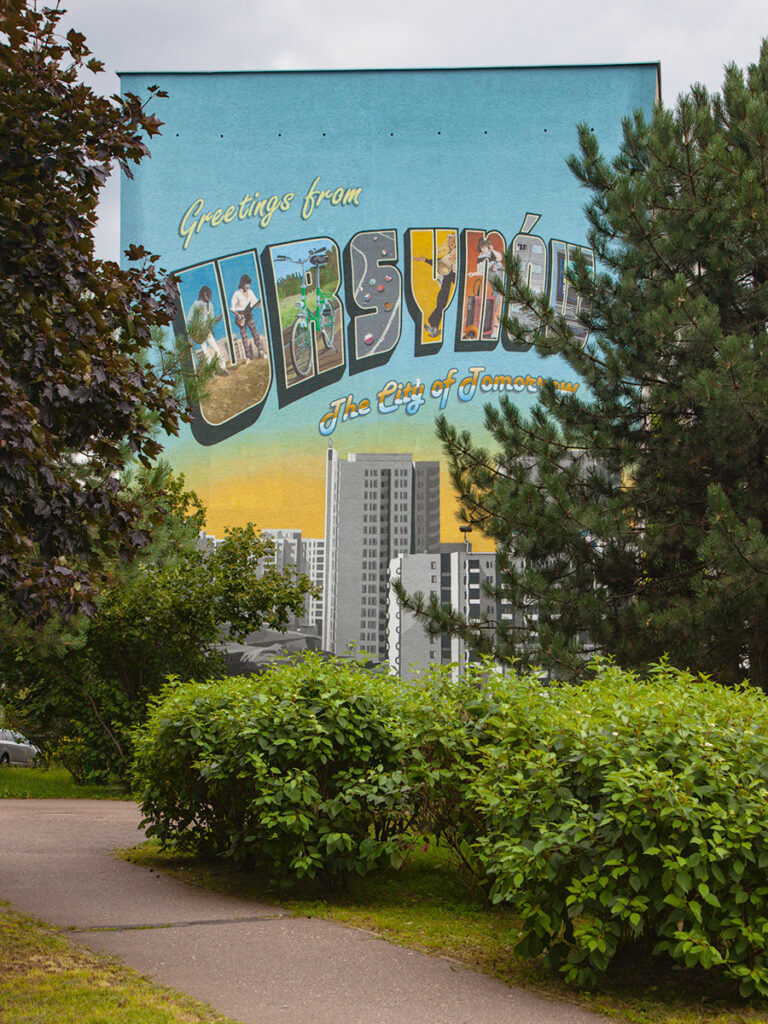 The area, however, was not abandoned, and it was rapidly filled with families. Following the political transition, its development continued unabated, this time spurred by work on the metro line as well as a new rash of private sector apartment blocks. Currently home to an estimated 150,000 residents, the effects of these factors had left Ursynów top-heavy with towering blocks and ‘blind’, empty walls staring into nothing – to soften this effect, murals were touted as the ideal retort.

Pushed through as part of the civic budget by a local design agency, Bakcyl Studio, a flurry were revealed in 2016. Since then, and thanks largely to the ongoing efforts of the aforementioned Bakcyl – a small team of three comprised of born-and-raised Ursynów enthusiasts – many more have followed, several of which have been executed by RedSheels, an all-female crew specializing in mural art. 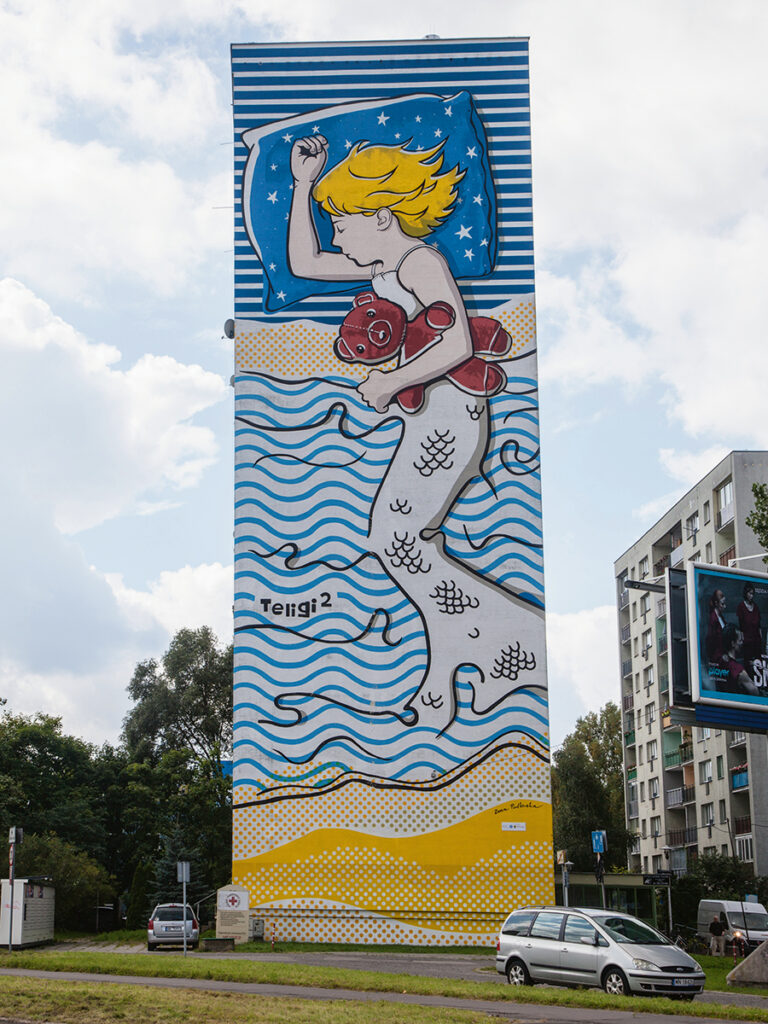 Local Flavor
Possibly the biggest triumph relating to Ursynów’s murals has been how they have sought to remain relevant to the area. On Teligi 2, for instance, a Sleeping Mermaid (2018) clasps a teddy bear whilst dozing in bed, a cheeky dig at those who view the area as little more than a dormitory suburb, 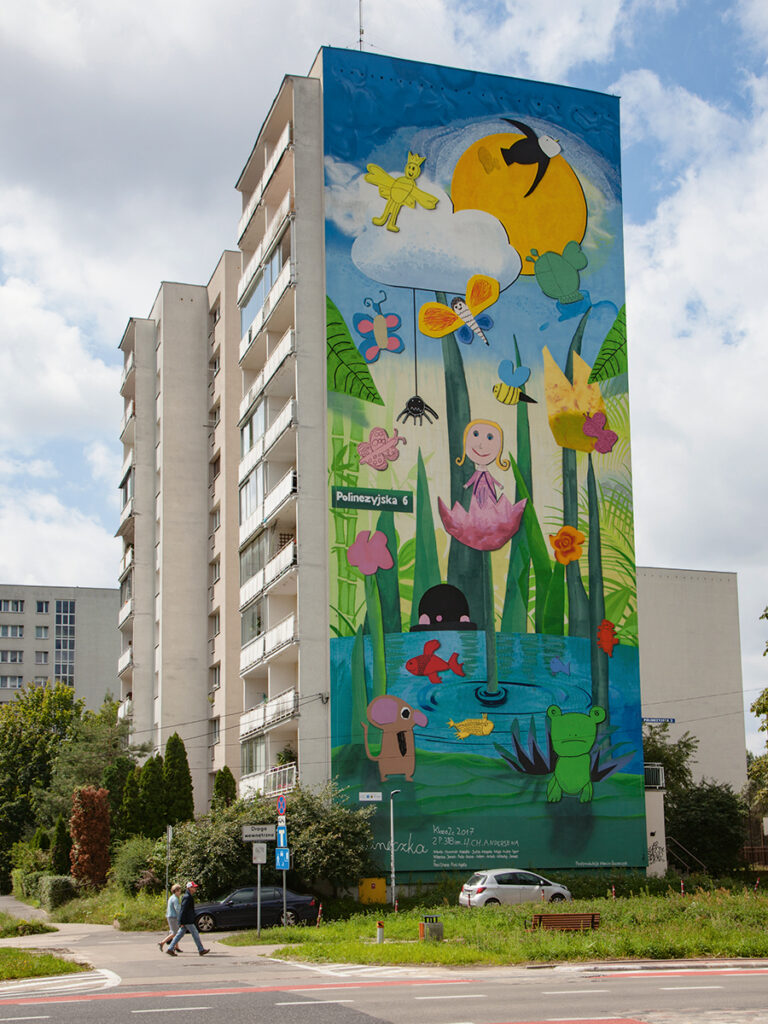 Beyond, at Polinezyska 6, another cheerful mural depicts Thumbelina. Based on drawings made by kids after a story-telling class and a 2-hour meet-and-greet with Bakcyl’s Zuza and Bartek (whose own daughter attended the school), the jaunty work was likewise delivered in 2018.

And then, there’s the one no-one can miss. Titled Greetings From Ursynów (Małej Łąki 21), this Bakcyl creation was inspired by the cheesy American postcards you’d have found in the 70s. Contained in the letters, find pictures depicting elements of local 80s pop culture. 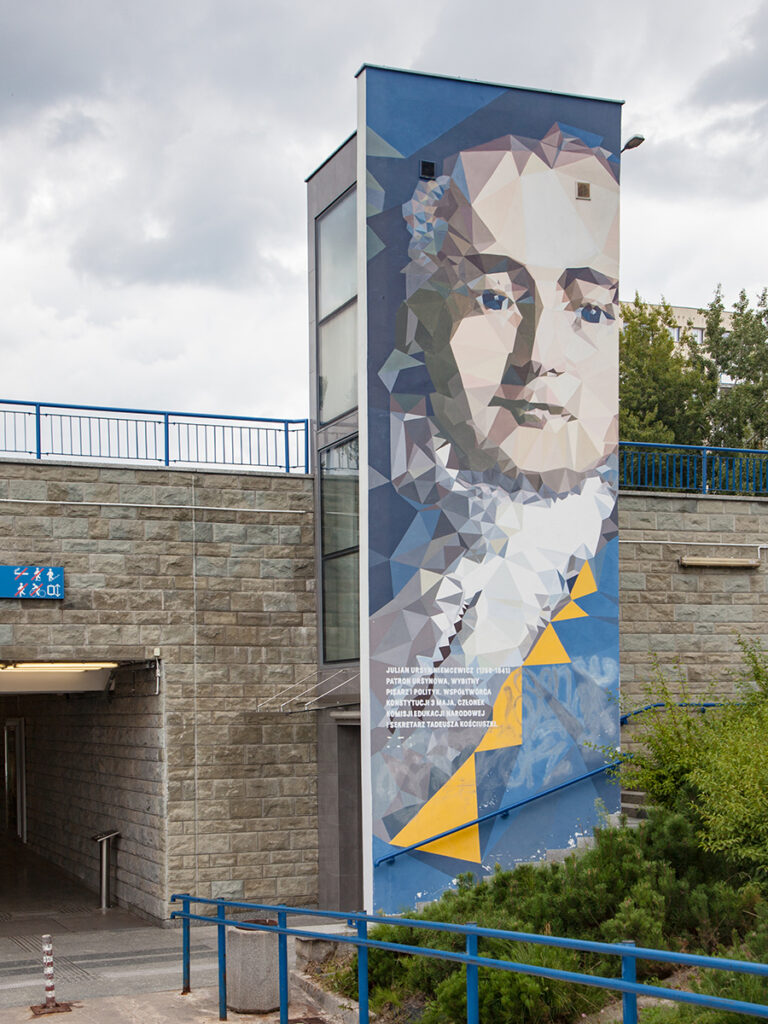 Underground Art
Using vector-style graphics, since 2018 the area’s metro stops have found themselves emblazoned with the faces of local legends: the area’s patron, Julian Ursyn Niemcewicz; the trio of cryptologists (Marian Rejewski, Jeży Różycki and Henryk Zygalski) credited with cracking the Nazi Engima ciphers whilst quartered in Pyry; humanitarian and educator Maria Grzegorzewska; and Witold Pilecki, a.k.a. the man that infiltrated Auschwitz to confirm the rumors of its horrors. 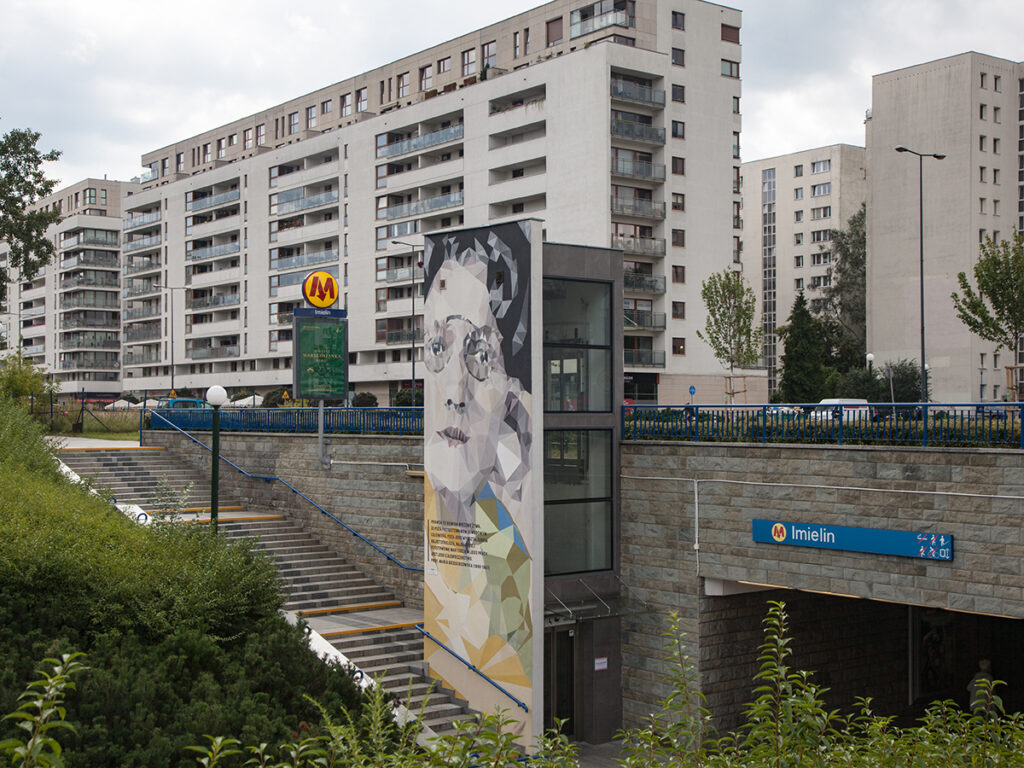 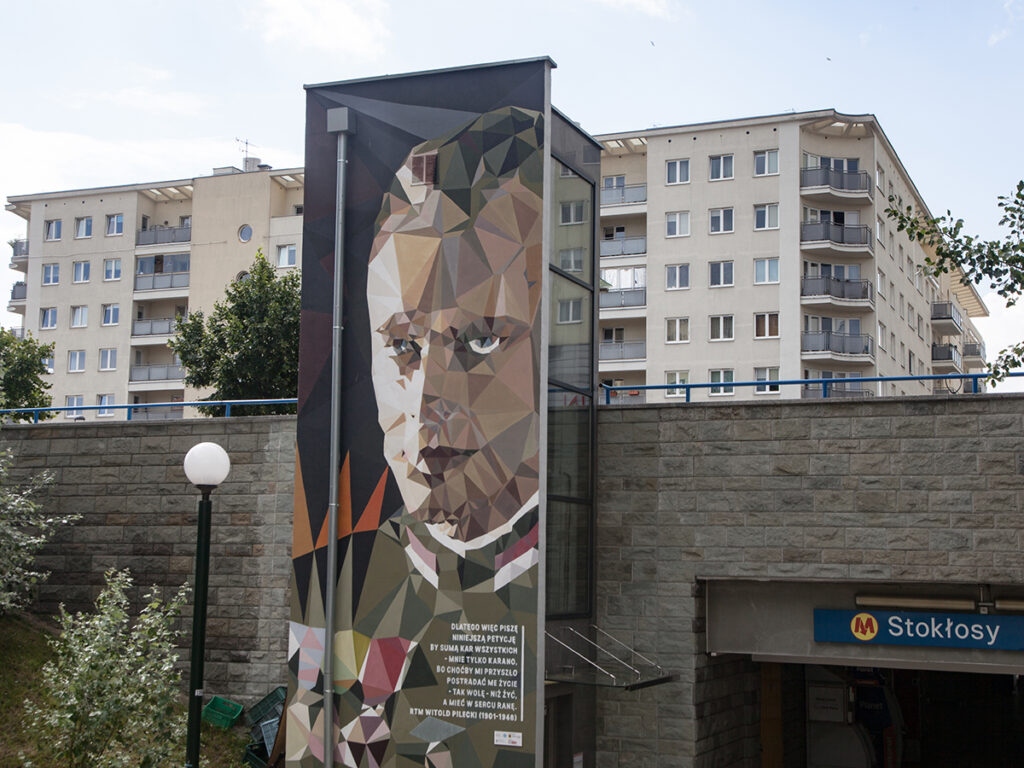 Back To The PRL
With its modern roots lying in the PRL era, it follows logic that a couple of the key murals commemorate figures from these times. At Metro Ursynów, that means engineer Stefan Karwowski and technician Roman Maliniak, the two protagonists of a cult comedy from the times. In between their often farcical exploits, this duo were often depicted helping build the housing estates of Ursynów. 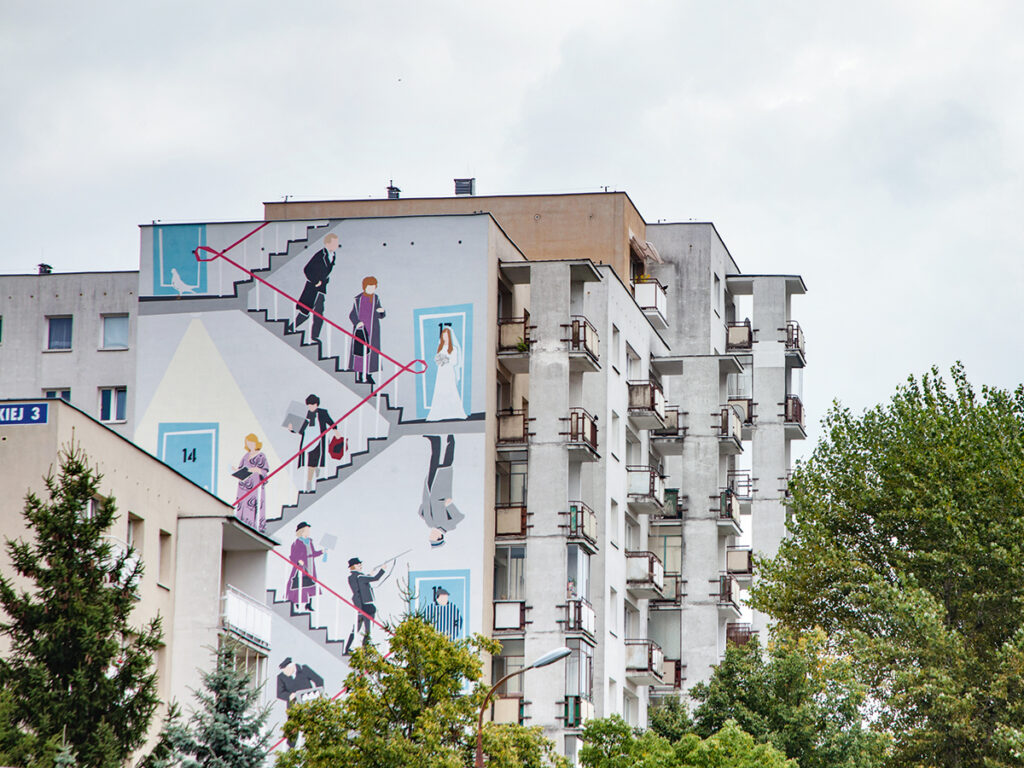 But it is Alternatywy 4 for which the area is best remembered. An outrageously popular 1980s satire based around the lives of the residents of an Ursynów block, the show was filmed around ul. Grzegorzewska and it is here (No. 1 & 3) that you’ll find two murals showing the cast engaged in various interactions on a stairwell as well as a map of the fictional estate that they inhabited. 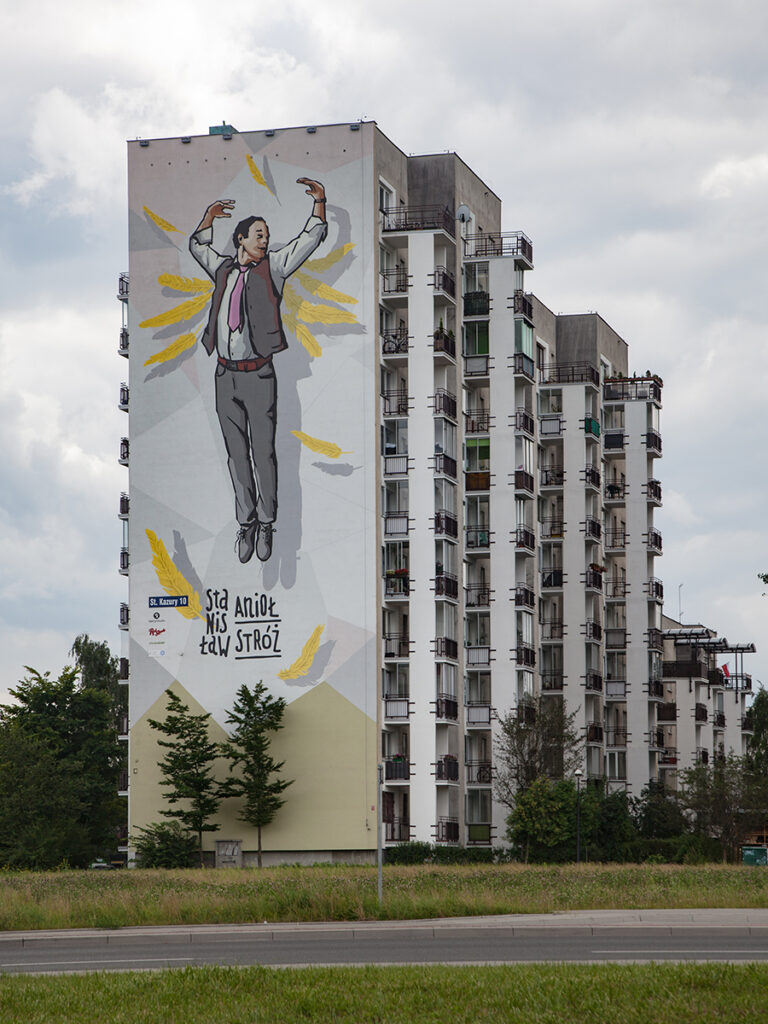 If ever there was an antagonist, then it was the building’s administrator, Stanisław Anioł Stróż, and he’s commemorated by way of his very own mural on Kazury 10.

The Natural World
Adding a natural vibrancy to the area, a number of murals celebrate the glories of the environmental world – a butterfly fluttering above a bear (Meander 16), a pair of swifts (Koński Jar 8), a seven-story tree entwined around typical housing blocks (Koński Jar 3), two swallows (Nutki 1), and an elegantly lifelike flock of birds (Na Uboczu 4). 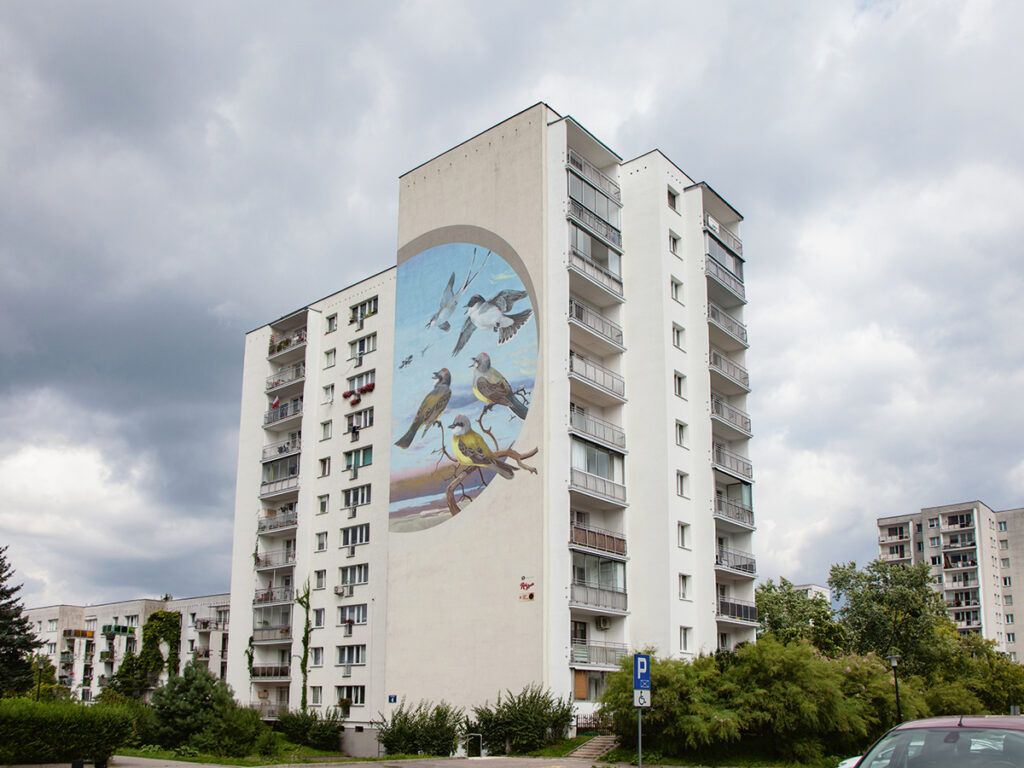 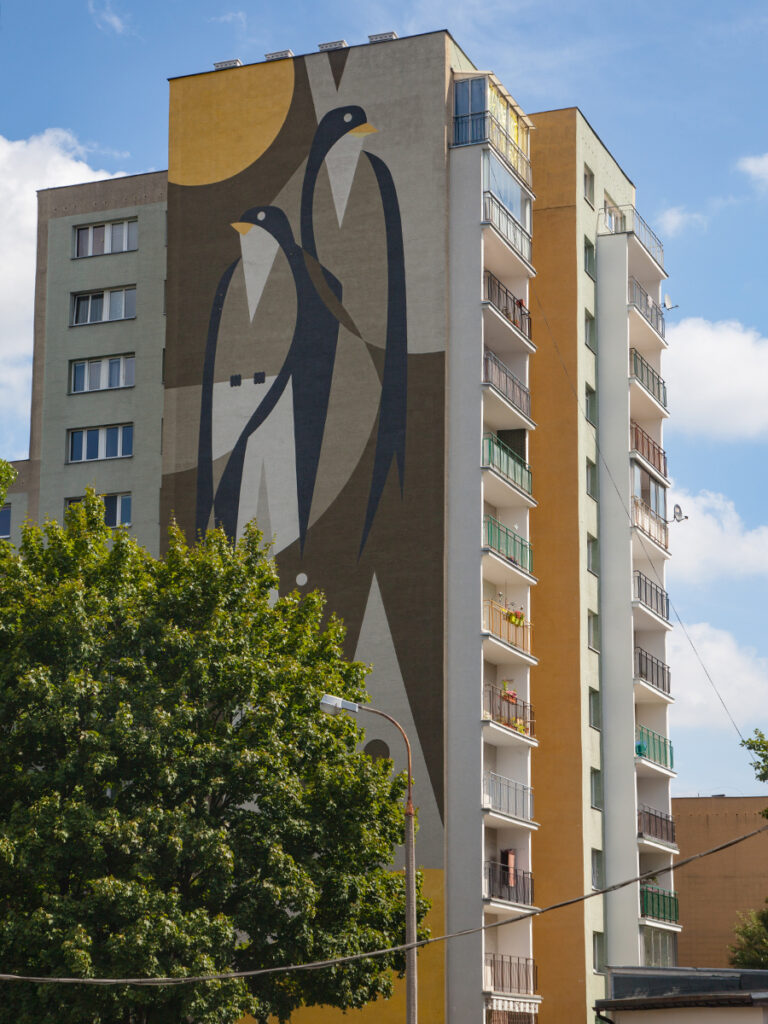 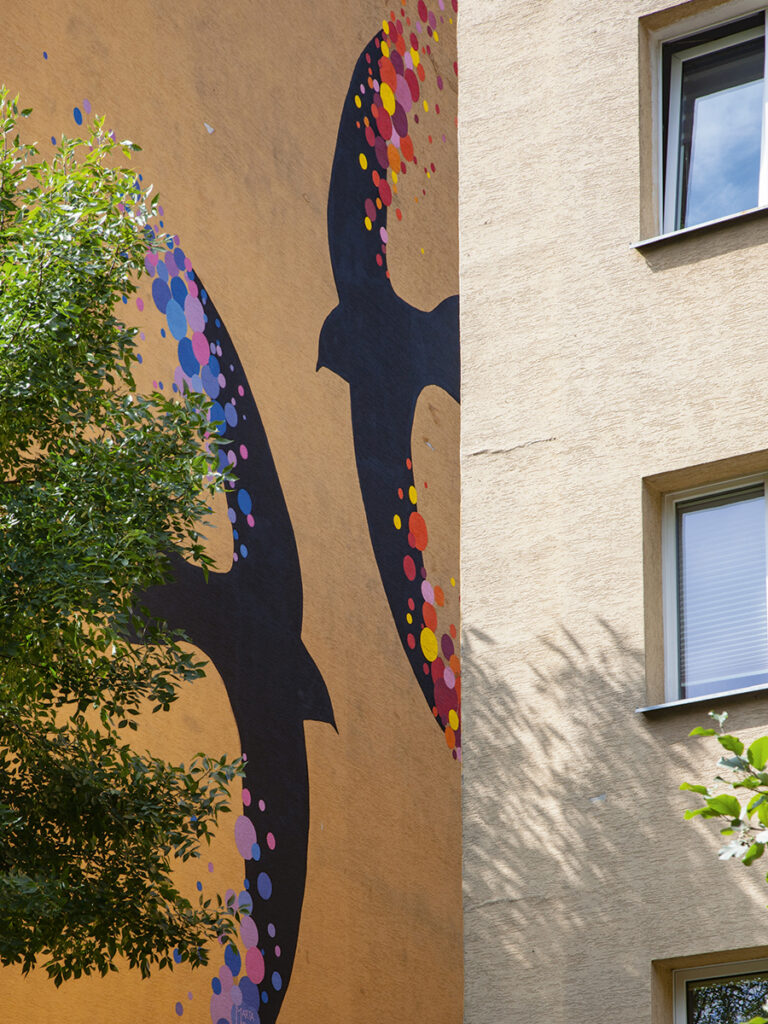 Often complete with actual nesting boxes, these murals were created to reconnect the suburb with the natural world. Others, of course, are more abstract, and these include a girl with a super-cool meadow growing in place of her hair (Małej Łąki 7) and a whale (Magellana 2) to depict Magellan’s maritime adventures. 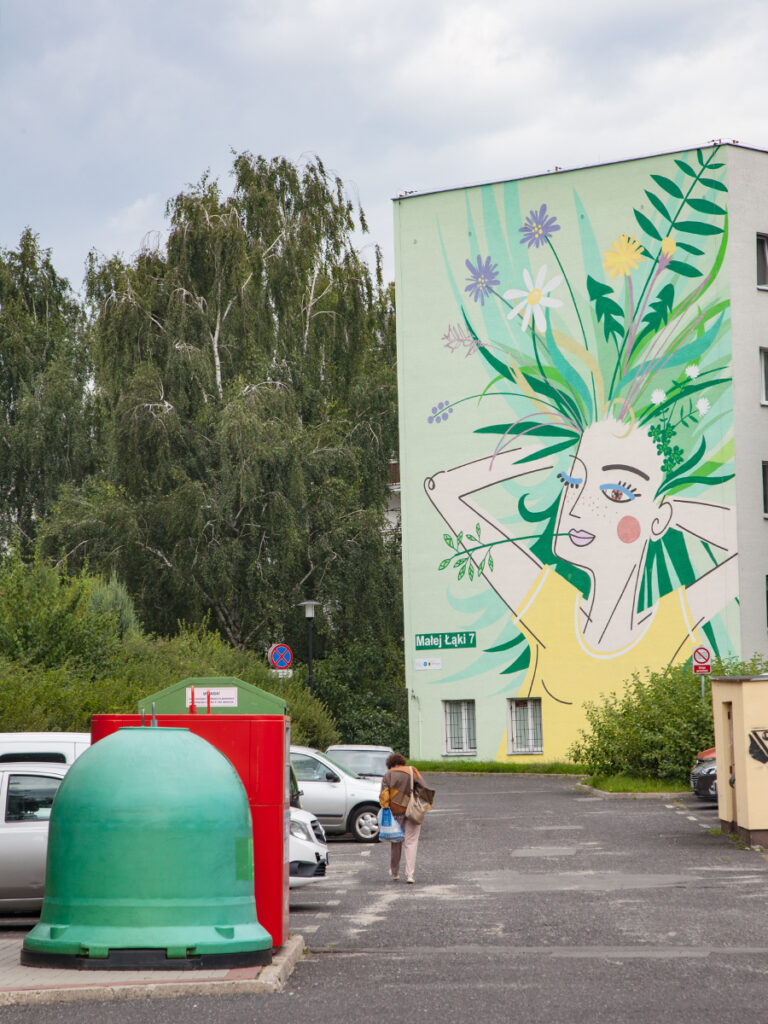 Faces To Remember
While getting lost amid Ursynów’s tangle of blocks, you’ll find yourself coming face-to-face with numerous other characters. Football hero Kazimerz Deyna stands stoically at Kazury 16 and the beret-clad painter Zofia Stryjeńska at Kazury 8. 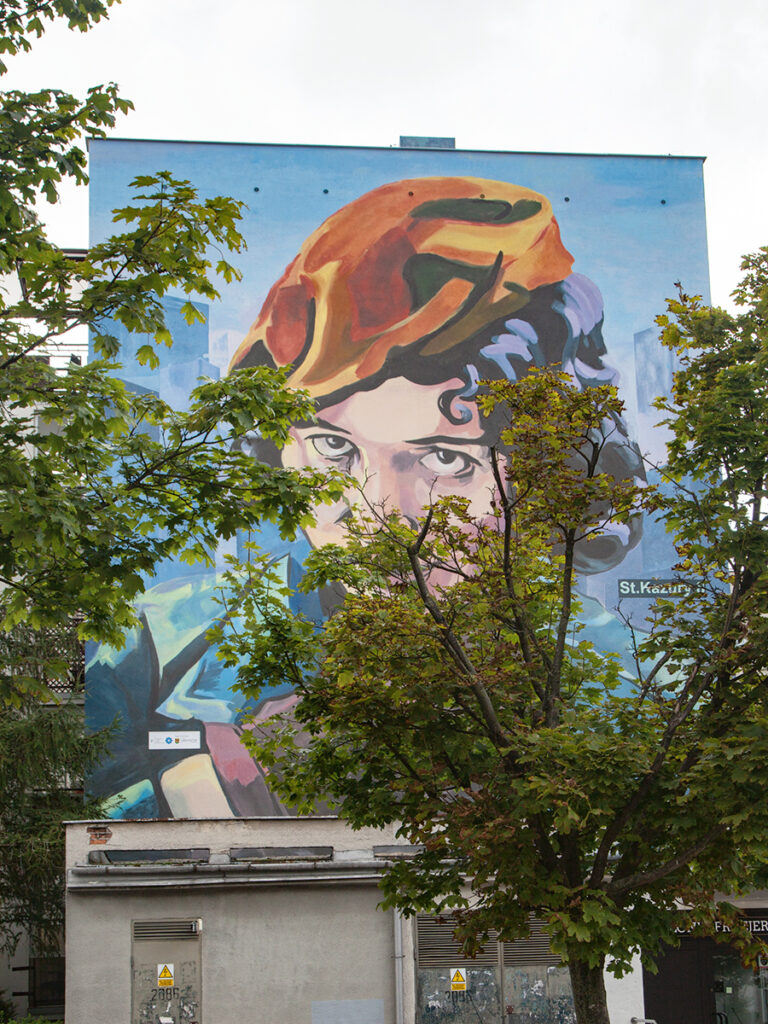 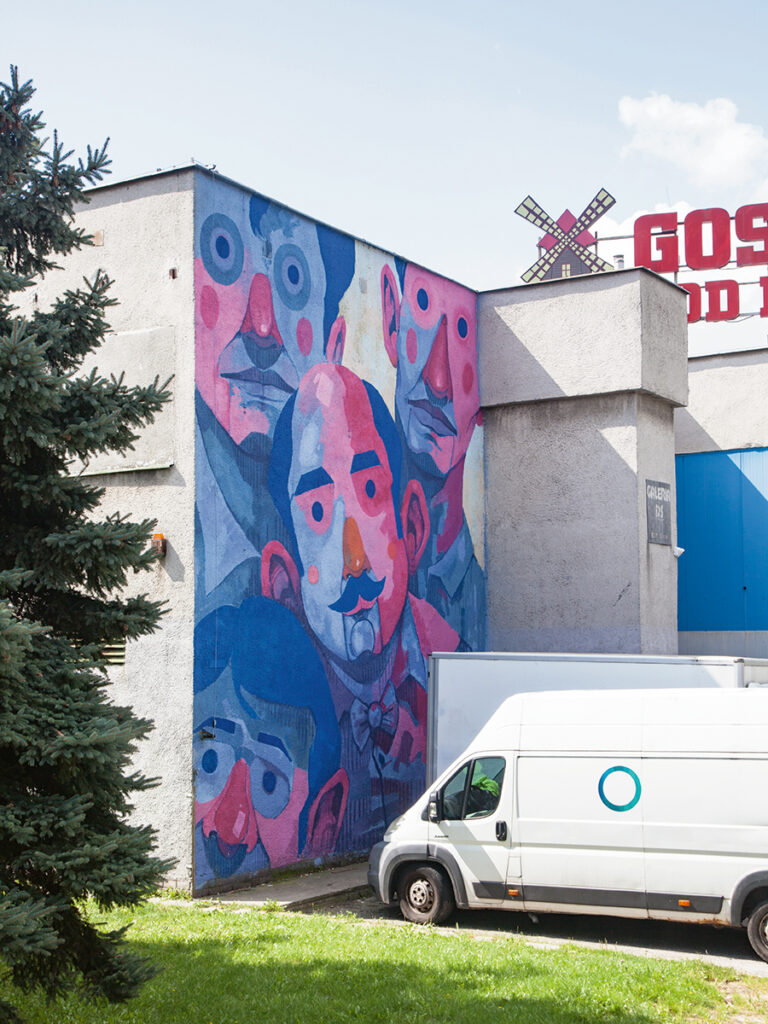 Known for his fairytale ballads, a colourful Tadeusz Nowak emerges from Wiolinowa 14, while at Hirszfelda 11 stands what many understand to be the area’s first mural. Unveiled in 2014, it depicts a female figure that is representative of the young Polish women that were sent to Ravensbruck concentration camp. 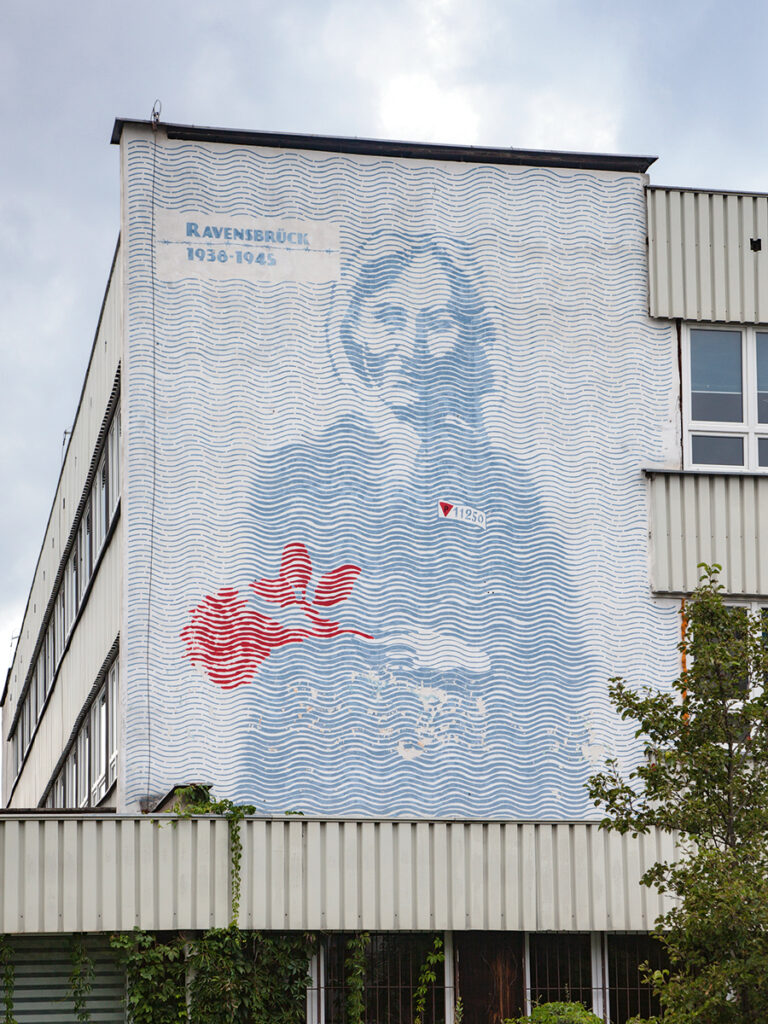