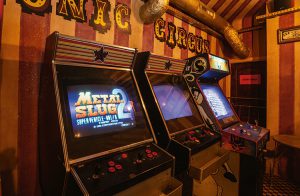 ‘Great bars of Poland’, Case File No. 254: Gram. Tricked out to look like a circus Big Top (read: parachuting chimps hanging from red and yellow stripey ceilings!), this minute bar taps into the post-hipster ideals of fun by handing precious space to zany arcade machines such as Pac-Man and Space Invaders, an Atari console and a pinball machine. There might be more, but we struggle to remember – you will as well after digging into their fridge of craft beer. 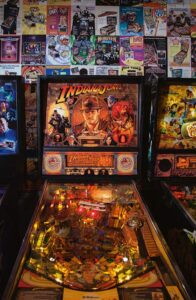 Be… The Pinball Wizard

An unruly riot of beeps and flashes and jolly jingles, Pinball Station presents fifty plus machines from the pre-digital age. Can you touch them? Yes, yes and yes! For a flat rate of zł. 30, visitors can spend as much time as they have testing their skills on classics such as Dirty Harry, Buck Rogers and Revenge From Mars. Click here for further reading. 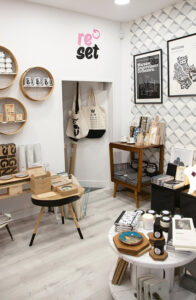 Though you wouldn’t count Reset as vintage in the traditional sense, the influence of the golden years of Polish design is never far away. Pluck through everything from retro screen prints to the kind of handle-less cups made famous by Poland’s milk bars. Stashed amid these, find gems such as pre-war German SABA radios repurposed as bedside tables, classic circus posters and 50s tea sets.  Click here for further information. 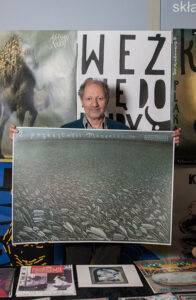 Originally a mathematician by profession, Włodek Orzeł supplemented his income during the Cold War era through the private sale of posters that he had snapped up abroad. Come 1989, and the budding collector jacked in the day job to pursue his passion. Regarded as one of the country’s foremost poster authorities, visit his stand inside the BUW library (polskiplakat.link2.pl) to browse and buy selected nuggets from his vast collection (latest estimate: 300,000 and counting!). Of course, there are other choices, and the Polish Poster Gallery in Old Town nails every angle possible with a choice of Warsaw-related art from pre-war till current day, Solidarity posters, and magic 90s efforts advertising the Satyrykon competition. Being there is a pleasure. 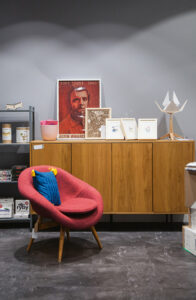 Pop Into… A Pop-Up

Cool points are easy to come by when you have a Vodka Museum and Google Campus onsite, but other initiatives have also given the Koneser development a special air of magic. For instance, the TRŁ Pop-Up Store  run by Targi Rzeczy Ładnych (The Fair of Nice Things): showcasing the best of Polish design, find graphics, furnishings, fabrics, ceramics, fixtures and fittings – many clearly inspired by the aesthetics of 50s, 60s and 70s Poland. 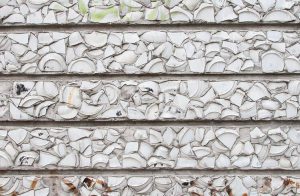 Go Off… The Wall

How’s this then for a weird design fetish: throughout the sixties and seventies the people of Warsaw went utterly bonkers and went through a phase of cladding buildings with porcelain waste retrieved from factories. Examples of this odd phenomenon are rife around town: Belgisjka 9, for instance, finds its walls rendered from crockery. Not to be outdone, residents of Etiudy Rewolucyjnej 9 went one better and chose toilet seats instead. 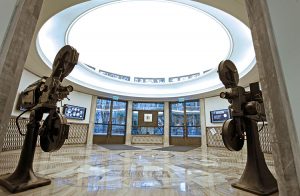 Don’t settle for second best. At a time when Hollywood is busying itself butchering the classics with shoddy, dismal remakes, hit up Kino Iluzjon to watch the golden oldies. January’s schedule had yet to be revealed at press time, but for a flavor of what you can expect then bear in mind that the month just gone saw screenings of Singing In The Rain, Belle De Jour and Whatever Happened To Baby Jane? Opened in 1956, and since beautifully restored in 2012, this remarkable cinema backs up its repertoire with a brilliant atmosphere that takes you through the mists of time. First designed in Socialist Realist form, the building’s incorporation into the Register of Monuments says much for its importance on the cultural landscape. In keeping with their earnest ambitions, don’t expect popcorn or any multiplex frills. 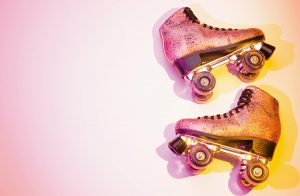 Get groovy at Wrotkarnia, a ‘roller disco’ inspired by the seventies and eighties. Usually held on Saturday evenings – though check ahead to avoid disappointment – discos feature cheesy evenings with themes such as ‘Summer Hits’, ‘Back To The 80s’ or ‘Disco Polo’. Skate rental available on-site, as are instructors should your skills be a little rusty. 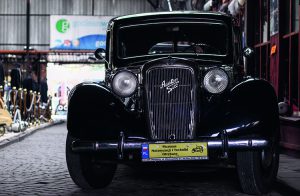 No sane vintage feature would be complete without mentioning cars. Immerse yourself in a different age by visiting the greasy, oily Motoring Museum in Otrębusy. Home to over 300 vehicles, displays include a 1930s Polish-produced Buick, WWII trucks and tanks, a Ford Thunderbird and Buick Skylark. From behind the Iron Curtain, car boffins will go bananas over the Russian-made Volgas, John Paul II’s Pope Mobile, and domestic classics such as the Syrena 104 – you can positively smell the history. Back in town, why not rent a vintage PRL era banger from Adventure Warsaw (adventurewarsaw.com). From Ikarus buses to Syrenas, they’ve got it covered. 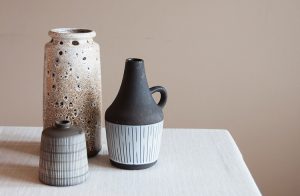 Sourcing her items from bazars and other ‘mysterious places’, the owner of Ładne, Agnieszka Konopczyńska, invites curiosity seekers to arrange a meeting in her storage space in Grochów or to click and buy online. Retailing domestic and international items for house and home, find a comprehensive choice of glass, ceramics and porcelain to lend your life some vintage flourish. “First impressions are important to me,” says Agnieszka, “I only stock things that are interesting, have a purpose and that I actually like myself. As for vintage, for me its appeal lies in the fact that we harness existing resources without harming the environment – I don’t respect waste or consumerism. And, on a personal level, the treasure hunting aspect is really quite addictive – you never know what you might find!” 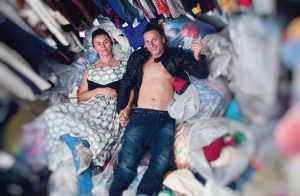 Hailed by many as the best vintage clothing store in Warsaw (nay, Poland!), the aptly-titled Vintage Store concentrates on quality, original finds from the likes of Barbour, Moschino and Aquascutum. But the specialty, that’s the clothing of Thierry Mugler, with the star discovery of 2018 being a gold jacquard jacket dating from the 90s. “Vintage clothing is very personal,” says co-owner Kasia, “it reflects a person’s soul.” Looking around Vintage Store, you’re liable to agree. 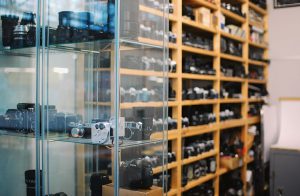 Prowl Hala Mirowska to discover the intriguing world of Foto-Larson. Warsaw’s No. 1 home for all things analogue, this labor of love is run by a bona fide obsessive with an intimate knowledge of all the cameras and contraptions that he has on offer. Beautiful in every respect, it’s the kind of store that’ll inspire you to kick digital 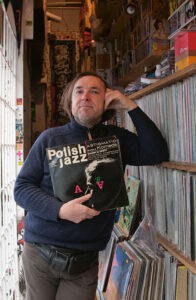 Operating since 1991, the phrase “three’s a crowd” takes on a new meaning entering the Hey Joe record store we haven’t measured, but there can’t be much beyond 70 centimeters between the barred windows and the shelves. The confined, claustrophobic space makes for a uniquely personal experience, with the owner always on hand to offer his quite encyclopedic advice. There’s not a genre he doesn’t seem to cover, though rare Polish vinyl is a particular specialty. This place is legendary! 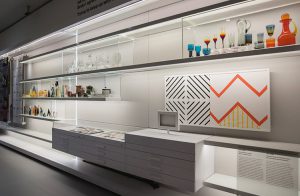 Vintage fans, you’ve hit the motherlode at the Gallery of Polish Design. Opened at the end of 2017, the most recent permanent gallery at the National Museum in Warsaw showcases a bamboozling array of objects to give the full 360 view of Polish 20th century applied arts. Logically organized following a chronological timeline, star pieces range from the Kowalski Wall Unit (as seen in practically every Polish apartment from the 60s onwards) to Teresa Kruszewska’s iconic 1973 ‘tulip armchair’. The smaller items are equally compelling: a 1960s Bambino phonograph, a wood-wire Dachshund toy rolled out just after the war, and a hilariously flimsy travel iron from 1975. Pre-dating communism, striking examples of the country’s design pedigree are numerous, the highlight arguably being a stunning tubular lounge chair by Bohdan Lachert (who would later achieve cult status for designing the Brave New World that was the Muranów housing estate). 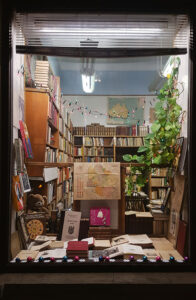 There’s a few zillion places in which you’ll find vintage printed material, but some out-punch the others. For the undisputed heavyweight, look for Antykwariat Grochowski, a maze-like space with over 130,000 books in its arsenal. Among the haul, find Polish comics such as Kapitan Kloss and Kajko i Kokosz, vinyl records, graphic art and old currency. Truly, it’s one of the wonders of right bank Warsaw. Back on the left side, the Insider just loves Naukowy Kosmos (wankosmos.pl). Proudly patriotic, the collection is filled with dog-eared Polish magazines, bygone TV guides from PRL times, heavy pre-war tomes, enigmatic postcards, stamps, sports albums, city maps, etc. You name it. 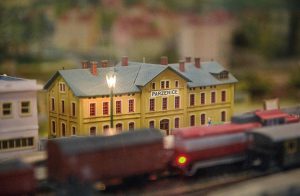 Pleasingly antiquated and old school in both design and execution, the Stacja Muzeum is a joyous romp through the days of vintage train travel. Inside, find 200 scale models of locomotives and steam engines, some beautifully detailed model villages and all kinds of train related ephemera: clocks, timetables, uniforms, etc. Outside is where the real anoraks head though, namely to clamber over fifty trains and carriages in various stages of life. Top billing goes to a 1942 German armored artillery train, and the walnut-clad personal wagon once used by Poland’s first post-war leader, Bolesław Bierut. 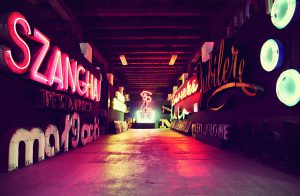 Go… With The Glow

Despite the disappointingly mainstream direction taken by the Soho Factory, one address continues to shine above all others – and in this case, literally. Opened in 2012, the Neon Muzeum can count itself as Warsaw’s hippest attraction with dozens of signs that were created during Poland’s neon boom of the 60s and 70s personally salvaged from the scrapheap by photographer Ilona Karwinska. Part of a crafty communist ambition to align socialist beliefs with consumerism, the government’s decision to ‘neon-ize’ the country offered a ray of light to ordinary Poles living in deprivation. Now, these old signs – restored to their twinkly best – are pure Instagram porn.  For further reading about the Neon Muzeum, click here. 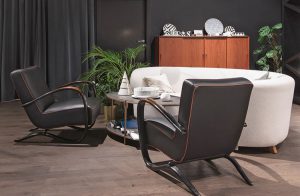 Collaborating with a core group of expert craftsmen, the stylish pieces at Future Antiques utilize artisanal techniques to return items to their fullest aesthetic potential. Though much of their furniture is sourced from Stockholm, Bordeaux and cities known for their mid-century design, it’s Copenhagen that holds the biggest fascination. 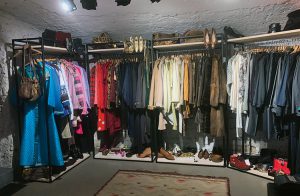 Check Out… The New Lady

Make an impact by revising your look at New Lady In Town. Inspired by the 8os Polish punk scene and a mélange of other sub-cultures, this is where, in there words, “Dynasty is mixed with Salt-N-Pepa and Madonna is besties with Biggie Smalls.” They really mean it, as well.