Once known as a sensible business city, Poznań has become the embodiment of youth and creativity. The Insider goes West to see the town’s changing face…
By Alex Webber | Photographs by Ed Wight

Love at first sight? Not a chance. When I first visited Poznań, I was struck by how dreary it all was. That would have been 12 or 13 years ago, and I was in town to write a guidebook. By day I’d walk around the colorless city, bored rigid by its dank museums, while at night I’d sit in near-empty bars staring glumly at my drink. With a budget that was actually more of a budget deficit, even my hotel was miserable: a communist fossil where everything was brown – including the tap water. By the time the trip was up, my notebook was largely filled with suicide notes that blamed everything on Poznań. Bastard place.

It’s come on since those days. Unlike Warsaw, it really hasn’t grown much taller, but the changes have been every bit as rapid. You notice that arriving. No more do platforms lead down into stained and sweaty tunnels, today’s station sucks people into the kind of arcing glass structure you’d expect at Cape Canaveral. And it’s user-friendly, maybe too user-friendly. Pausing for just a moment alerts the attention of bright, young attendants dressed in satsuma colors. It’s their cue to spring into action: “are you lost,” they enquire, “where do you need to go?”

Seeing that they’re asking, I’m headed to the hotel. In terms of prestige, the Blow-Up Hall 5050 was once described by The Guardian as being ‘the most futuristic hotel in the world’. Funded by billionaire Grażyna Kulczyk, it dubs itself ‘an interactive art piece’, though with prices starting at zł. 450 I’ve chosen somewhere else. The Puro, at half that amount, is a smart alternative with a lobby that looks like something from the pages of Dwell magazine: vibrant pops of color, striking artwork and shelves sprinkled with eclectic items accrued from design stores. Even my room – the most basic on offer – is a treat: a touchscreen tablet to ‘control the environment’, a glass-walled bathroom, and a bed that’s marshmallow soft. I’m tempted to turn off the phone and stay put for the night. 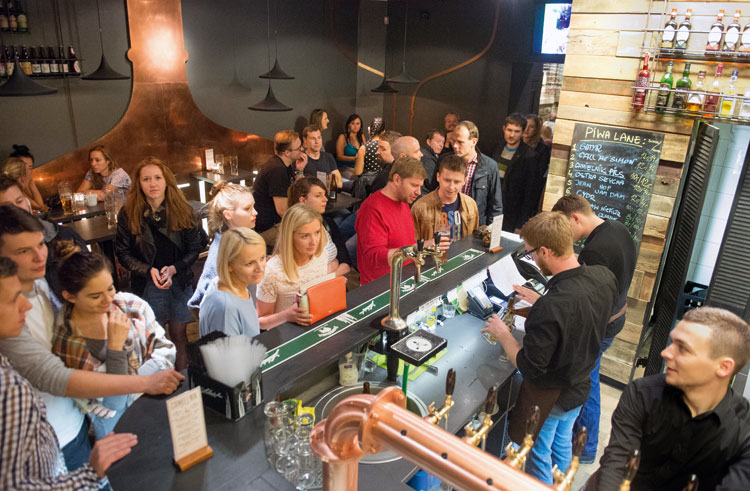 But doing so would be an error, not least with Chmielnik just yards away. Set on Żydowska, a street once known for its twee, dainty cafes, it’s part of a new wave of bars that have revolutionized The ’Nan: achieving a warm, nocturnal mood through its combination of copper, salvaged wood and exposed brick, not even the capital boasts a better designed tap room. Of course, this is just the beginning, and having met with friends the night veers into a high-charged haze that sees us triumphantly conquer every pub in our path.

A crescendo is reached in Ministerstwo, which in spite of its traditional beer hall aesthetic at times feels like a crucible of creativity: next to us, handsome neo-geeks are designing craft beer labels on the back of a sodden beer mat, while outside our cigarette break is given added energy by the muddled musings of a graffiti artist named Gem. “I make walls tell the truth,” she slurs somewhat threateningly. 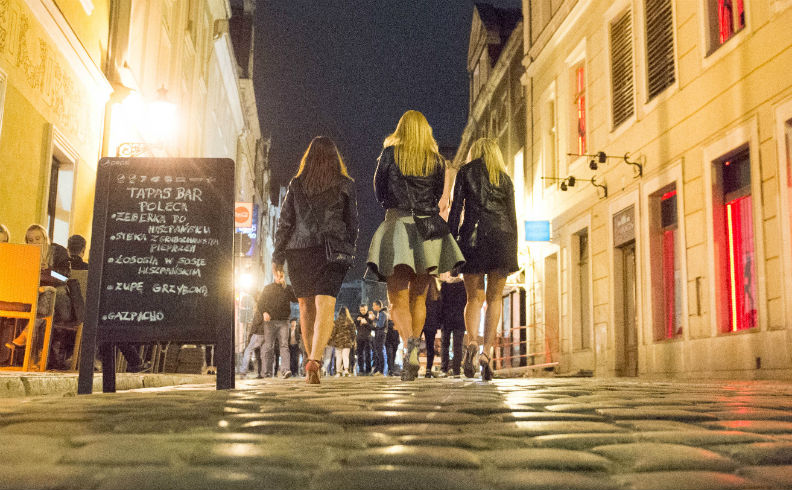 Feeling vile the next day is not an option, nowadays there’s just too much to see. To clear my head I make the walk to Park Cytadela, whose features include a Commonwealth cemetery in which Allied soldiers shot after The Great Escape lie buried. Earning its name from the 19th century fortress that stands in the grounds, the park is heavy with military history, so relief comes by way of an artistic installation by the internationally acclaimed Magdalena Abakanowicz. ‘The Unrecognized’ presents 112 headless figures, each two meters tall, packed tightly together but straying in different directions. “What is man,” asks the work, “who are we and what direction are we heading?”

South East is the answer, specifically to Brama Poznania, an ultra-modern exhibition (“this is NOT a museum,” shouts the PR bumf) that tells the story of the nearby Cathedral Island – recognized by all as the ancient cradle of the Polish State. With no actual artefacts on display, the space unfurls into a multimedia-driven experience that takes visitors past illuminated boards filled with information not to mention a beautiful model of the earliest settlement. The concept is brave, the architecture stunning and the subject matter interesting, but I leave feeling completely perplexed: it’s as if the treatment of history has been passed from the historian to the IT consultant. It just doesn’t sit right. 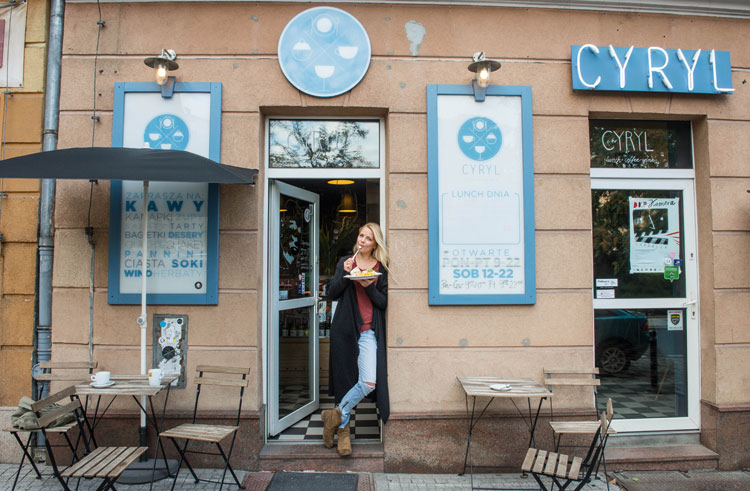 Back across the river, the 1956 Uprising Museum deals much better in its handling of the past. Set inside a castle built in 1905 for Kaiser Wilhelm II (and subsequently remodeled by Hitler’s darling architect, Albert Speer), it follows a similar approach to Warsaw’s Rising ’44 Museum: plenty of interactive elements and dioramas, but also real substance to back up the frills and flash. And this is no less than the topic deserves. Honoring the first armed resistance that the Polish Communist party faced, this revolt was brutally pacified with scores killed by the security services. Among their number was a 13-year old boy named Romek Strzałkowski, and his bloodied shirt and personal effects make for a deeply poignant moment of reflection.

Not all of Poznan’s sights are as serious, and that much becomes clear at the Croissant Museum. Based around a cooking demonstration, the experience is led by a pair of jokers whose rapid fire banter is interfused with fast facts and comic asides. Audience participation is mandatory, so don’t be surprised to find yourself slashing at dough with a medieval sword. As it transpires, it’s also the best place in town to see the Poznań goats: appearing at noon, these mechanical animals emerge from the Renaissance town hall clock tower before smashing heads together. So the legend has it, in 1511 a pair of goats destined for the cauldron managed to escape the town hall kitchen and cavorted up the tower. Such was the public’s amusement, a pair of mechanized creatures were later added for posterity. 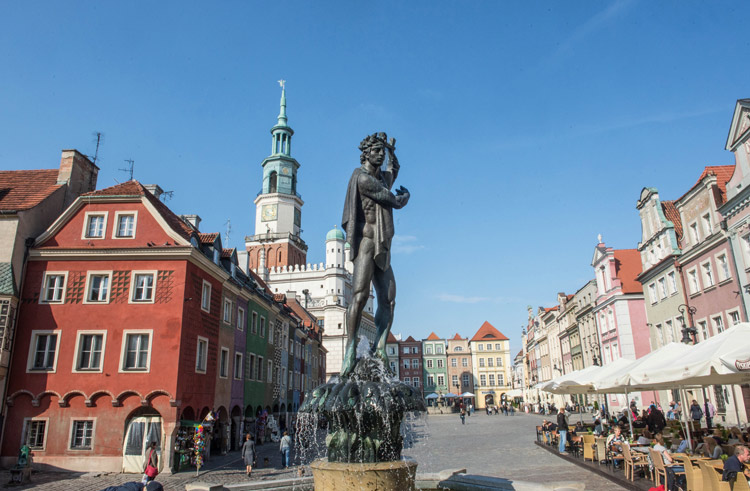 With that over and done with, thoughts turn to food, and as enjoyable as the take-home samples provided by the Croissant Museum are, they won’t last the day. The grid-like Old Town is honeycombed with eateries, but for the best deals I follow the advice of the locals and head further afield. While dining out was once a hazardous pursuit, what was formerly a minefield has now become a dinefield: Warto nad Wartą is typical of the restaurants / hangouts the last few years have harvested, with a menu that’s modern, thoughtful and focused on nature.

Same goes for Cyryl, a laidback bistro whose brand of quick, healthy cooking is as enticing as the servers. Pretending to peel through a book, I eavesdrop on attractive in-love couples and important sounding lawyers discussing due diligence reports. Inching through a bottle of wine, conversations whirring around me, I allow myself the fantasy that just by being here I’ve become part of the fabric that makes modern Poznań. It’s a feeling, I decide, that I like very much… 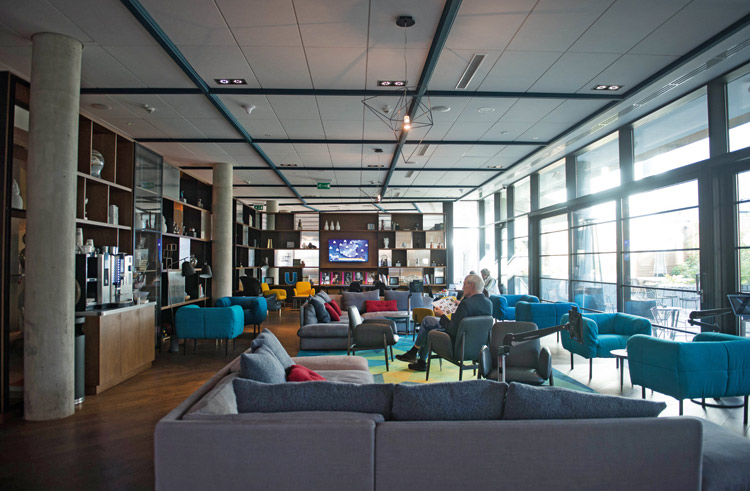