A giant bronze sculpture by Poland’s most valuable female artist has left officials at the Palace of Culture & Science brassed off after going under the hammer in March.

Designed in 1953 by Alina Szapocznikow as part of a competition held to celebrate Polish-Soviet friendship, the three-meter bronze work failed to win but was commissioned nonetheless. Depicting two males linked in brotherly embrace, the sculpture – called Przyjaźń in Polish – was cast the following year and then installed inside the main hall of the Palace of Culture & Science. There it remained until 1989 when the shift in Poland’s political climate sparked a wave of iconoclasm across the country; around the nation, baying crowds ripped down any monument and memorial associated with Big Brother next door. 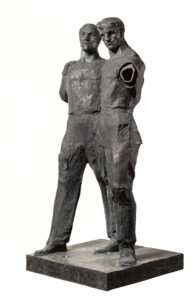 Fearful that a similarly unruly horde would damage the interiors of PKiN, the Palace’s director of the time, Waldemar Sawicki, recruited a professional removal firm to get rid of Przyjaźń before the public could beat them to it. Such was its value at the time, no concerns were raised when the work crew sawed the arms off to enable them to squeeze the statue through the doors. In lieu of a fee, the boss of the removals company – an entrepreneur by the name of Zbigniew Bogusz – was then allowed to keep the monument in return for services rendered, with the assumption being that he’d sell it for scrap.

Remarkably, Bogusz demonstrated the foresight to keep hold of Przyjaźń, and for several years it festered at the bottom of his garden. A couple of times, reporters from Gazeta Wyborcza penned follow-up articles about the monument’s fate, but despite its survival being public knowledge PKiN officials expressed no interest in recovering it. In fact, no-one did. Several times Bogusz attempted to donate it to museums for just the value of the metal, but only one showed any enthusiasm – even then, the sale was cancelled after the museum in question refused to cover the cost of transport.

There was, however, to be another twist in the tale. Despite enjoying relative success while she was alive, it was only this century – long after Szapocznikow had died – that the artist’s work began receiving the international recognition it deserved. In fact, the interest in her has been such that she’s since become Poland’s most expensive female artist.

As for the statue, that was recently restored (minus the arms that were removed and subsequently lost), and placed on public display in March for the first time since its removal ahead of an auction that was due to be held as this issue went to print. With the guide price set between zł. 600,000 and zł. 900,000 (though with some insiders tipping it to sell for even more), PKiN officials have been left red-faced and ruing the day they let the monument leave their custody.

But despite PKiN representatives issuing desperate claims challenging the legality of the way Bogusz came to own the statue, the sale has been allowed to go ahead after no grounds for grievance were found. “We sought three different expert legal opinions,” says Juliusz Windorbski, CEO of DESA Unicum, the auction house handling the sale, “and all agreed that the statue was obtained legally. I’m so happy that the current owner didn’t destroy this fantastic piece of art, and I’m equally happy that it’s now going to go to a good collector that truly appreciates it.” PKiN, in the meantime, have been left to puzzle over the iconic work of art that they allowed to slip their fingers. 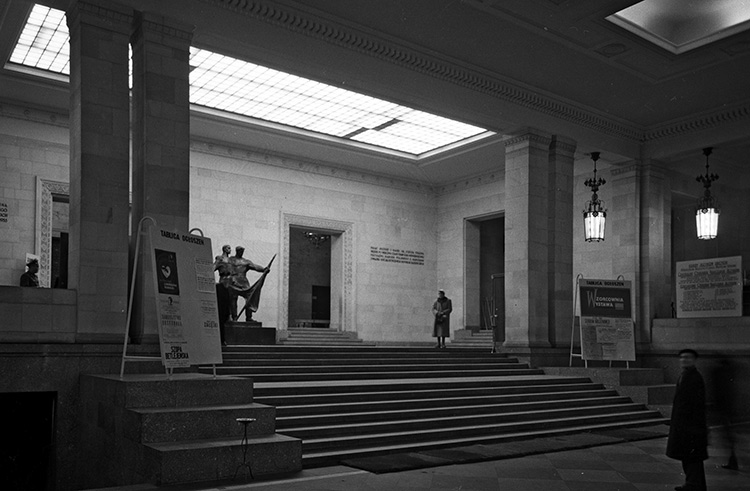 The artist in the eye of the storm was born in 1926 to a middle-class Jewish family living in Kalisz. Imprisoned in the ghettoes of Pabianice and Łódź, she later survived a string of concentration camps including Auschwitz. Taking Czechoslovakian citizenship in 1946, she studied sculpture in Prague before enrolling in the École nationale supérieure des Beaux-Arts in Paris. Returning to Poland in 1951, she soon won a series of state contracts to produce sculptures with Przyjaźń being one of her first. Partly, the value ascribed to this work stems from it being one of her earliest pieces, as well as the only one to survive to be sculpted using the Socialist Realist aesthetic.

The death of Stalin marked the demise of Socialist Realism and Szapocznikow’s work became darker and more personal. Her fame grew and in 1957 her first large-scale exhibition – held at Warsaw’s Zachęta Gallery – was the subject of a documentary shot by Roman Polański. Two years later, she produced one of her defining works, Bird, an abstract sculpture that was rediscovered languishing in the barn of a collector in upstate New York. Auctioned in 2016, it smashed the previous record for Poland’s most expensive sculpture when it sold for zł. 1.95 million.

Having already begun casting her own body in 1962, Szapocznikow was diagnosed with breast cancer in 1968 and responded by producing a series of tumor sculptures before finally succumbing to her illness in 1973. While her life saw a string of high-profile domestic and international exhibitions, she was largely undervalued abroad and it has only been this decade that her work has been awarded the prominence it warrants. Among others, acclaimed exhibitions of her work have been held in New York’s MoMA and England’s The Hepworth Wakefield.