Where Angels Fear to Tread

alternative89 castle6 lagow1 swiebodzin1 travel46 weekend133
Not even the world’s biggest Jesus draws the tourists to Świebodzin county – and they don’t know what they’re missing… The Insider discovers Poland’s...

Not even the world’s biggest Jesus draws the tourists to Świebodzin county – and they don’t know what they’re missing… The Insider discovers Poland’s best kept secret.

That Tesco over there is a piece of history – go on, have guess when it was built.” It’s early in the morning, and rather than starting my day with a coffee I’m being harassed by a man who resembles a small, sweaty owl. Ignoring my lack of interest The Owl continues undeterred. “Two years before Christ,” he guffaws, breaking into snorts of laughter that provoke eye rolls from the staff.

I am in the dining room of the Hotel Graffit in Świebodzin, and this pest is clearly a regular. As waitresses glide around sweeping up breakfast plates I can sense sympathy for my plight. There I am cornered, with nowhere to run, listening to a script that’s doubtlessly delivered to each stranger he meets. Or maybe not. It’s the height of summer, and judging by the number of guests taking breakfast strangers are not something that tend to trouble Świebodzin. It wasn’t meant to be that way…

Four years ago, at the end of 2010, the world’s tallest statue of Jesus was unveiled on the edge of this town. How? Who? Why? Conceived by Sylwester Zawadzki, a retired, Mercedes driving priest, the project was entirely funded by private donations totaling US$ 1.5 million and then realized by volunteers that, apparently, even included local prisoners out on day release. The fruit of five years of labor, this not-so-baby Jesus tops out at 33 meters, three meters more than his more publicized twin in Rio. Well, with everyone going bonkers for Brazil this summer, what better time to check out this Rio of the East? 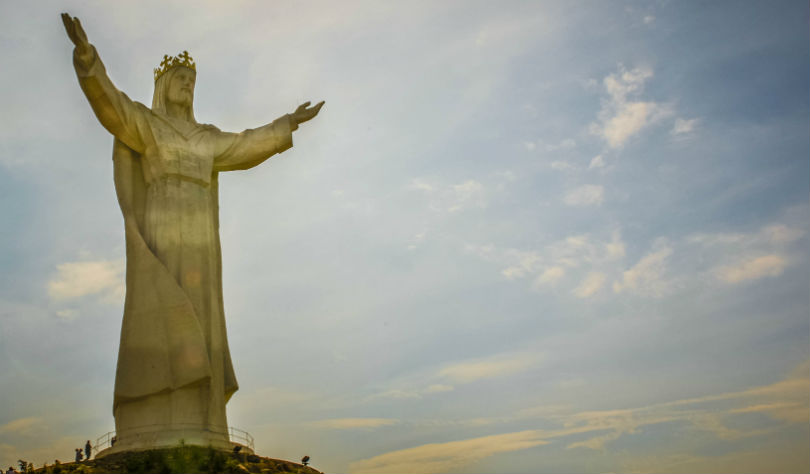 Set halfway between Berlin and Poznań, Świebodzin’s Jesus was meant to attract hordes of pilgrims, put the town on the tourist map and signal high times for everyone in the area. But aside from a few pokey cabins peddling Biblical literature and Catholic propaganda at the foot of the statue, there’s little evidence of the anticipated gold rush.

As we disembark at the train station, we are the only ones to alight at the platform. There is an unspoken feeling that we should have ‘done a Stalin’ – i.e. forget this place (and the Red Army largely did) and continue to Berlin. But our taxi driver is keen and eager, and mischievously takes us on a detour before depositing us at a hotel down the road from where we started. Thirty minutes in and we’ve been cheated already.

Our spirits are not dampened. The hotel is fine, all plastic plants and views of The Big J., and as we walk into Old Town there’s a sense of anticipation that good times are ahead. As it turns out, arriving in the Rynek is like boarding the Marie Celeste. It’s already late Friday afternoon, but there’s not a soul on the streets. It feels surreal, abstract almost – has there been a nuclear warning? I’m reminded of one of those dream sequences where you find yourself walking through a ghost town – no faces, no sounds, and no sensations other than overbearing oddness. It’s a floaty, drug-like tranquility that feels mildly hallucinogenic. 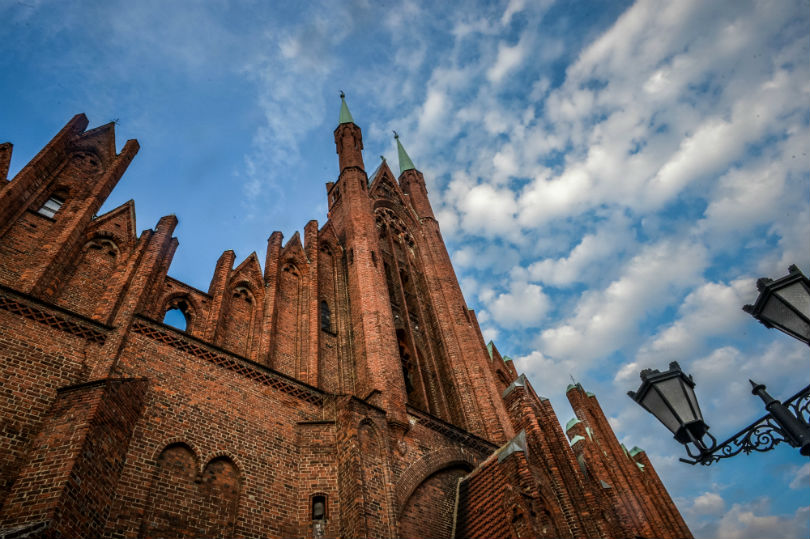 Is it lazy journalism to call a town pleasant? But that’s what it is. A swan white town hall with a castle-like tower sits in the Rynek, but not like a statement, more like a whisper. Inside it, the local museum is thick with mildew aromas and niche little finds: Prussian uniforms, antique maps and cracked looking pots. Today this will be pretty much all the culture we drink, for as we exit the museum we find a town that’s locking up. This is something that applies not just to the museums and institutions, but also the bars.

The longer we walk around Old Town, the more our choices diminish. What do people do for fun around here? From what I can gather, go to bed early. Yet just walking around is a pleasure in itself. Świebodzin is a pick’n’mix jumble of architectural styles: pastel colored art nouveau tenements, ruined medieval walls and arbitrary sprinkles of communist concrete. A cast iron statue of latter day Polish bard Czesław Niemen sits on a bench (he was a frequent visitor, and a benefit concert of his funded the municipal pool), and alongside him a zombie couple glugging back moonshine.

Resisting their appeals for our camera equipment we stop instead at an Italian restaurant in the Rynek. The pizza is hideous but the place is good fun. More importantly, there are people. We befriend the staff and on their tip-off we go clubbing, Świebodzin-style, first to Retro (a barn in a park), and then to Impreza which is in someone’s house. Or actually, their garage. Parallels to Rio’s nightlife draw a blank, but it’s a good night busting moves to wretched pop prats like Bieber & Styles. 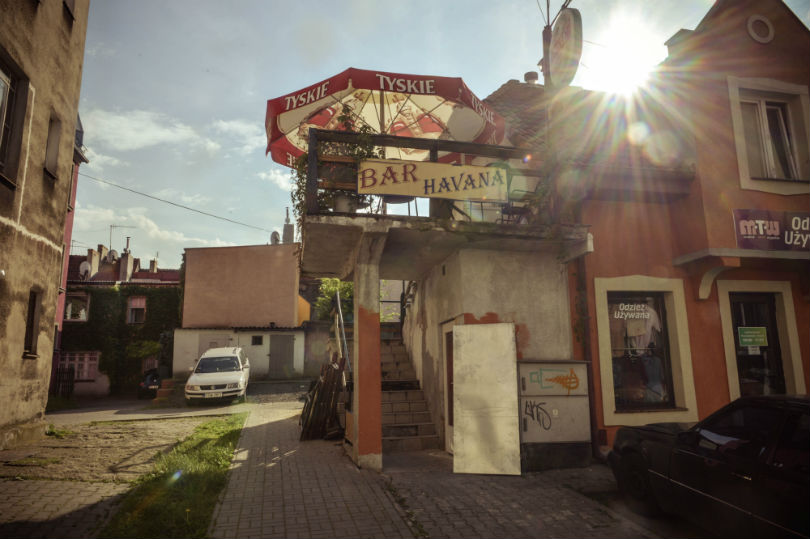 It is the next morning that I meet The Owl (“he was a hoot,” remarks the photographer) and in a bid to escape him we trudge in the blazing morning sun up to Jesus. Standing in his shadow you expect him to be bigger. That is, so we learn, a common lament. While Rio’s Christ comes perched on a rock overlooking a glittering city, Świebodzin’s stands in a cabbage patch with a Tesco next door. Having posed for obligatory pictures with our arms outstretched there’s an air of, “erm, so what next?”

What next indeed. For Saturday we’ve already arranged to head to Łagów, what we haven’t arranged is transport. Still smarting from yesterday’s cheating, bastard driver we instead negotiate with a Bond girl receptionist to chauffeur us for the day. She agrees, but hearts sink when she reveals the small print: her boyfriend will act as chaperone. As we swerve down corkscrewing roads the conversation is awkward and stilted – every time I look in the rearview mirror the hulk-like thug is giving me the evils. His dot-like eyes say one thing and one thing alone: “one false move and…”

Implied threats aside, the drive is a joy. The eccentricities of small town Poland come thick and fast: in one village we pass an ambulance being loaded up with someone’s furniture ahead of a big move. In Mostki there is a zoo with a billboard announcing the two star attractions – a zebra and a bunny rabbit. And there is a roadside brothel with an ingenious name: Alibi Driver’s Club. We stop at neither, instead plugging on to our hotel for the night.

As it transpires it’s actually not in Łagów. Neither is it a hotel, rather a private 19th century farmhouse owned by elderly art dealer Jerzy Ludwikowski. We drop our bags, promise to be back soon and instead take the opportunity to explore the area – after all, we have things to see. These include Pętla Boryszyńska (bunkry.lubrza.pl), 10 kilometers away, a vast network of Nazi bunkers built pre-war. Having been dropped off by the Bond Girl and her henchman, we opt to take a cycling tour of the interlinking tunnels. 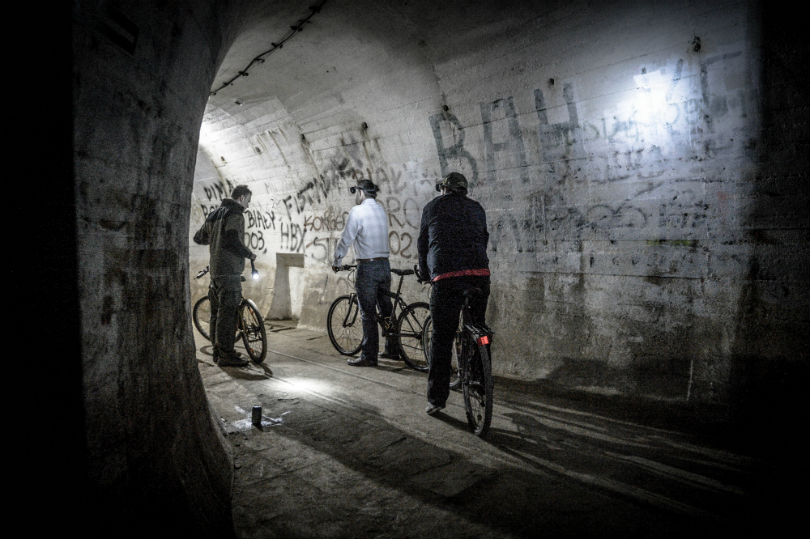 Our guide Marcin is a good sport, and rather than boring us rotten with stats and facts, gets us wooshing through the tunnels with intermittent stops: unconcerned by history, he instead calls stops to shine his torch on elaborate graffiti dating to the 80’s when this was a favored spot for illegal raves. Some of the art is stunning, other bits disturbing (a giant Nazi eagle). There’s plenty of stories, as well, though most involve death: “see that cross, that’s where a 16 year girl died in 1996. And over there, that’s where some bloke accidentally burned himself alive. 1992 if I remember correctly.” We too have some close scrapes. The bikes are strictly circus-issue, and the photographer and myself take it in turns to collide headlong into walls and other such hazards. We hit daylight panting, and as we wait for Bond Girl to pick us up order dinner from the Bunker King food truck which, as it happens, is marginally inferior to the franchise that inspired it.

Still buzzing from our subterranean escapades, we’re in no mood to return to the farm. Instead we head up to Łagów, a small hamlet planted between two lakes. Ringed by woodland and water, the focal point of the village is Joannitów Castle which was built in the 15th century by the Knights of St. John. Now a hotel (featuring a ‘Torture Room’ equipped with manacles and chains), it’s also open to the public, and climbing the 35 meter tower is an absolute must – views like this stay with you forever. Edging back down the steps, we stop for refreshment in the hotel restaurant and amuse ourselves by reading a riveting menu that touts dishes like ‘exquisite fried pork with leavened kinds of noodles poured with courtly sauce’. 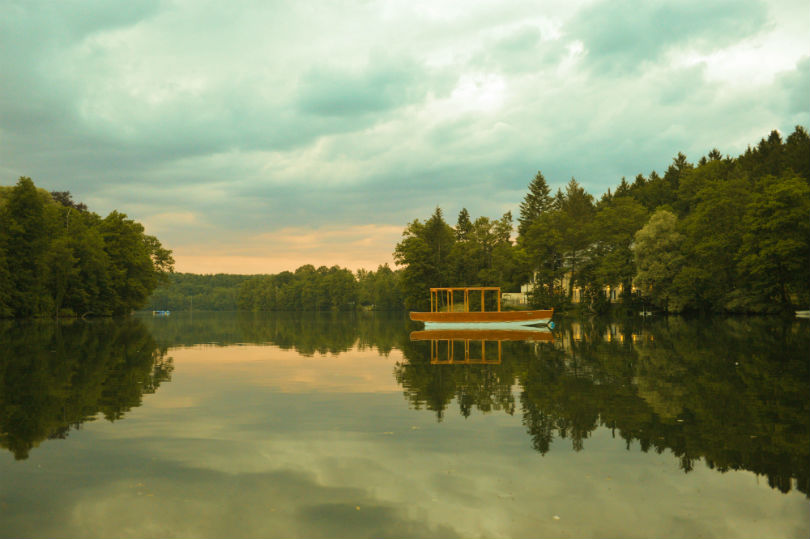 Back in the village, the gently curving streets are pure Brothers Grimm: arching medieval gateways and cross-timbered houses. Thoughtfully, there is also a sausage grill built into the bonnet of a Polski Fiat, but we’re after other touristy pleasures and instead rent a paddle boat and breathlessly peddle amongst nonchalant swans. It has been a wonderful day, and we see in sunset with organic German beer on the edge of the lake. Aware that our contract with the Bond Girl has already expired, we cajole another local to drive us to our dwellings.

The following day I am woken by a hearty cock-a-doodle-do outside the window. I am well-rested, and in a good mood to explore the farmstead. Named Frankówka (frankowka.travel.pl) in memory of Franek, the owner’s dead dog, it’s a picture of bucolic charm – inside, antiques and artwork, outside, tangled greenery and fluttering butterflies. Nearby, a wooden village church stands in incongruous proximity to a pyramid hotel, and I’m once more reminded of the bonkers magic of backwater Poland. As I pay the zł. 80 fee for the stay, I’m suddenly torn about returning to Warsaw. Maybe skyscrapers and Starbucks can wait another day. Maybe, I ponder, I should stay another night. So I do.