A native New Yorker of Polish ancestry, Michael Schudrich has been living in Poland since 1992 where he serves the community as Poland’s Chief Rabbi. He speaks to the Insider about life in Poland…

Before settling here you visited Poland a few times in the 70s, and attended Jagiellonian Uni. I can understand people returning nowadays to trace their roots, but in the 70s? That’s just bizarre.

I am bizarre. I was 18, I’d never been to Israel. I was preparing my first visit when a friend said, hey, why not come with me via Eastern Europe. Well why not, it sounded a great idea. People were always talking about the Jewish life that had vanished from Poland, but I found myself fascinated by how much had survived.

You returned to Poland in ’92 with the mission to revive Jewish culture. That’s an enormous undertaking – where do you start?!

No, the first job was to see if there were any Jews left! And yes, we discovered greater numbers than we imagined. We found there were Jews, and that they wanted to be Jews. Revive Jewish culture? I don’t like the word revival, I prefer ‘reemergence’. But there is no answer to the question. Maybe there is a ‘B’ answer, and that’s education, education, education: through summer camps, through Sabbath, through many ways, we’ve taught people to experience Judaism in a non-coercive way. And it’s gone well – where we once had 250 families, we now have 600. Where once most of our congregation was aged 65-70, today they’re under 40. It’s a ‘young-ing’ community, not an ageing one.

There was one guy who spent 15 years in the priesthood before discovering he was Jewish. Another had a Nazi grandfather and Jewish grandmother. Then there was a couple who had started dating when they were both skinhead high school students. Both turned out to be Jewish – they’re now very devout: from skinheads to covered heads! You know, I’ve had three people walk into my office saying, “I’m circumcised, I don’t know who I am,” before pulling down their pants! 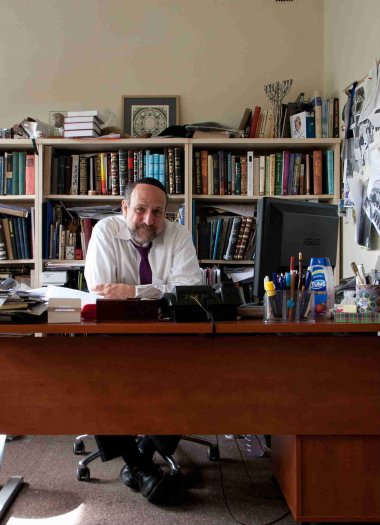 You were attacked by a thug a few years back, and famously fought back and chased your assailant…

I’m a New Yorker, what am I gonna’ do! Yes there’s anti-Semitism, but no more than anywhere else. The challenge is not in the percentage who hate Jews, but in the number of people who tolerate it. Why do Jews think Poland is anti-Semitic? Because of the past, because of the pre-war situation. But we’re not there anymore. Pope John Paul II did more than anyone in 2,000 years to combat anti-Semitism: “To know Jesus, you need to understand Jews,” he taught. It had an effect.

Yes. For 50 years after the war people couldn’t talk about Jews. A minority is practically wiped out and you can’t talk about it! When communism finally collapsed we saw a great curiosity about Jews. Over twenty years that curiosity has matured into an appreciation for Jewish culture. Many now see it as their responsibility to perpetuate this culture, whether it’s through holding a festival, cleaning a cemetery or whatever else.

This area around pl. Grzybowski was and is the center of local Jewish life. How do you feel about how it’s developing?

In Judaism we preserve our culture through the way we live. We have tremendous respect for history, so it’s a good thing to preserve, but it’s also a good thing to move ahead. Warsaw is a modern city, Warsaw needs modern buildings. No-one here is destroying Jewish things – the Germans already did that.

How about Kazimierz in Kraków – will Warsaw ever have a district like that?

There’s an irony and an injustice that Warsaw was destroyed because it fought. I don’t think there ever will be a Jewish district here: the buildings aren’t here, the people aren’t there. But who knows, I never thought you’d be able to call Warsaw charming. But there is a charm. Looking back to the 70s, even the 90s, you’d have never have dreamt it would be possible to say that, but the impossible has become possible. In the last ten years we’ve seen the good impossible happen, as opposed to the horrible impossible which Warsaw has had plenty of.