Phoenix From The Flames

Widely credited as the driving force behind the reconstruction of Warsaw’s Old Town, the post-war conservatory efforts of Professor Jan Zachwatowicz are to finally be honored by way of  monument to be raised close to Pl. Zamkowy. So what better time to take a look at the district’s unlikely revival.

Reduced to ashes and dust by the end of the war, the story of Warsaw’s Old Town could easily have been portrayed as one of tragedy. Instead, it is the reverse: the remarkable tale of an indomitable city that never gave up…

“I have seen many cities destroyed, but nowhere have I been faced with such destruction.” So spoke General Eisenhower whilst touring the ruins of Warsaw at the end of the war. Clearly, this wasn’t just lip service he was paying. Even by their own standards, the Nazis had surpassed themselves in their treatment of the city. 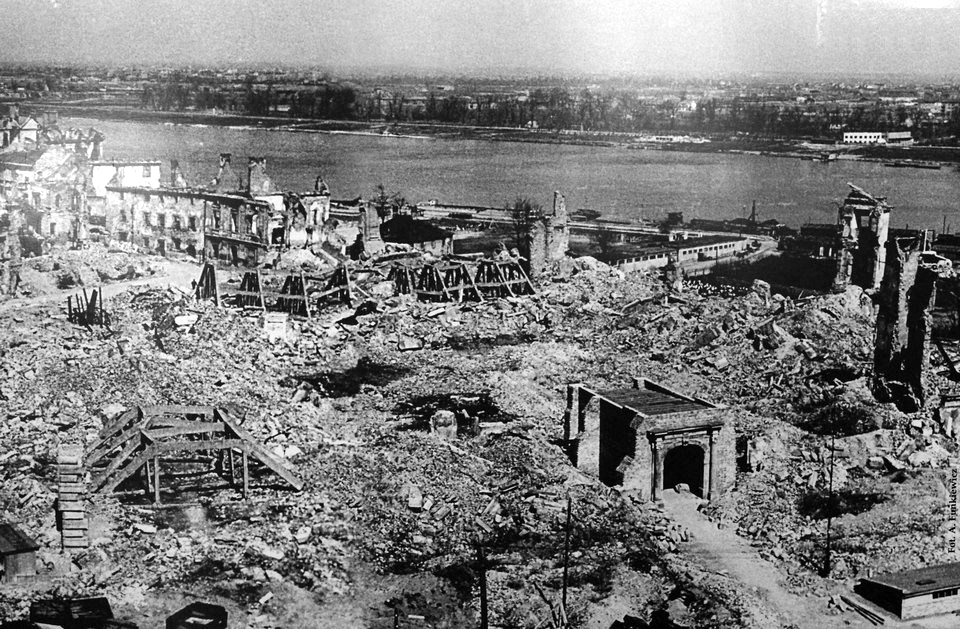 Already scarred by the Blitzkrieg of 1939, further devastation was visited on Warsaw as a result of the bitter house-to-house combat that defined the 1944 Uprising. The 63 day battle left a brutal legacy: 250,000 people dead, and a city bashed and battered by the savagery of the fighting. Incredibly, Warsaw’s story was to get a whole lot worse.

The Uprising had infuriated Nazi high command and had left Hitler raging. When news of the insurrection reached Fuhrer HQ Hitler’s faithful little pet, Heinrich Himmler, promised to use the Uprising as an excuse to wipe Warsaw out once and for all.

And so, once the Poles had signed the capitulation papers, the local population was exiled and Nazi demolition squads moved in to methodically erase Warsaw from the map. Himmler had ordered for “every single house to be blown up and burned,” and by the time Soviet forces marched into Warsaw in January 1945 the scene was one of utter annihilation: 85% of the capital lay in total ruin. In today’s terms, estimated total damage stood at a staggering US$ 54.6 billion. 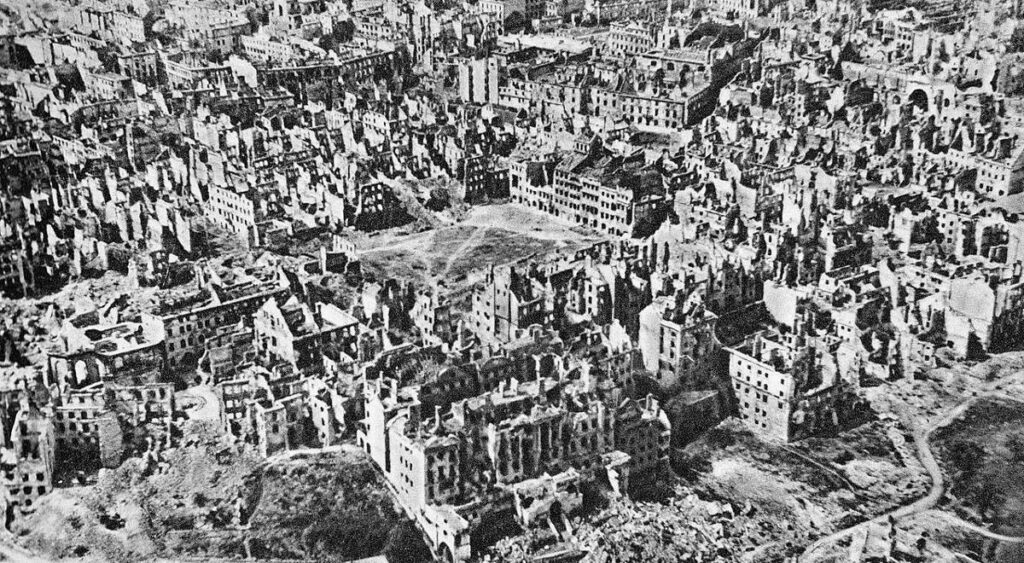 It’s hard to fathom the sheer scale of the devastation. Such was its severity plans were mooted to shift the capital permanently to Łódź; to leave Warsaw as a windblown heap of bricks – a permanent memorial to the vagaries of war. For the communists, though, the opportunity to rebuild Warsaw as a model socialist city was too good to refuse. The question was, how?

Much of Warsaw’s pre-war architecture was deemed by authorities as too ‘capitalistic’, too bourgeois. As such, the tall 19th century tenements that had lent Warsaw its romantic silhouette were replaced, instead, by blockish estates and concrete carbuncles. What had been known as the Paris of the East became Paris of the Beast. But not all of Warsaw was given the Everyman treatment.

In spite of some arguing for Old Town to be turned into an anonymous housing district (other concepts included transforming it into a park ringed by war rubble), the communist party identified the value of rebuilding it from scratch. 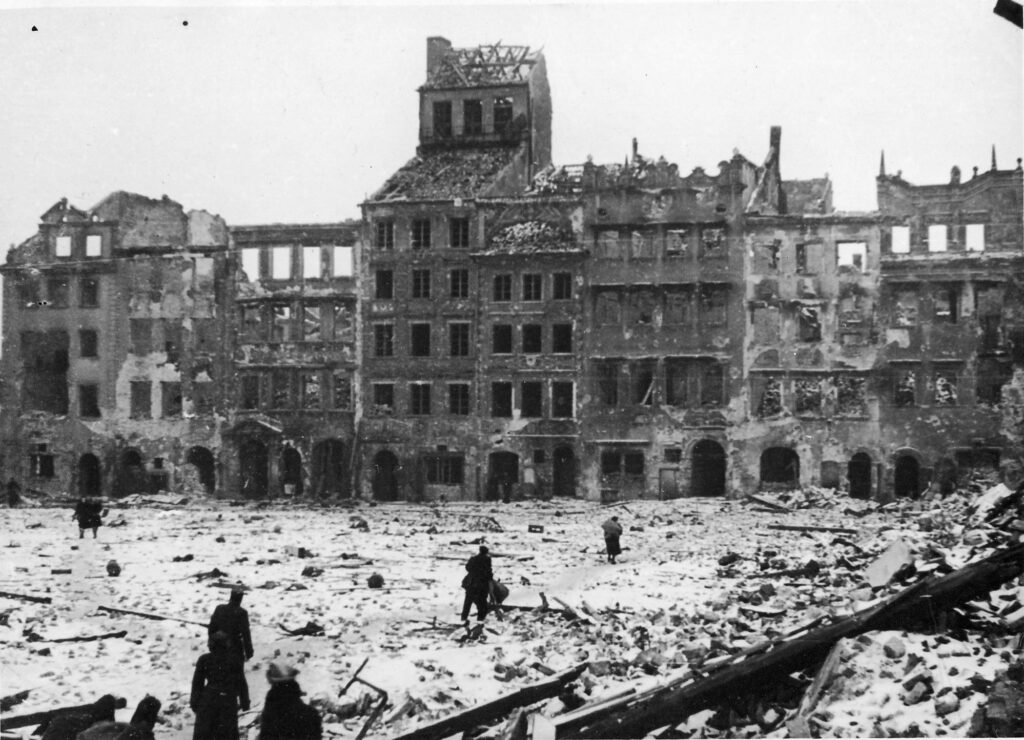 “The rebuilding of Warsaw was an act of national defiance,” wrote historian Norman Davies, and the reconstruction of Old Town “was shrewdly designed to establish the patriotic credentials of the post-war order.” And yes, the impact on national morale cannot be understated: the drive to rebuild the historic core was considered a triumph of human will – not just domestically, but internationally.

Henry N. Cobb, an American student who visited Poland in 1947 and photographed his findings was moved to write: “although I had seen some pictures of Warsaw in ruins, they did not prepare me for the reality that I encountered. The Warsaw portrayed in my photographs was, I still vividly recall, more than a devastated capital city: it was a stage on which, against all odds, a thrilling human drama of recovery and reconstruction was being played out.”

With the exception of the site of the former Jewish Ghetto – razed in wake of the 1943 Jewish Uprising – no other area suffered as much destruction as Old Town: of its 260 burgher houses, only the skeletons of six survived the war. The task in hand was not going to be simple, and was further complicated by interfering authorities.

Indeed, it was because of busybody communists that the old town wasn’t restored as faithfully as it could have been. Pre-war photographs of the district were numerous, whilst during the occupation activists and architects maintained an exhaustive and extensive inventory of the city’s architecture lest carnage ensue. Even so, when it came to rebuilding Old Town these documents and photographs were largely overlooked by the planning committee in favor of twenty or so vedute authored by Bernardo Bellotto. To assuage public opinion, the excuse cited for this move was the fact that Bellotto had been the official court painter of Poland’s last King – Stanisław August Poniatowski. 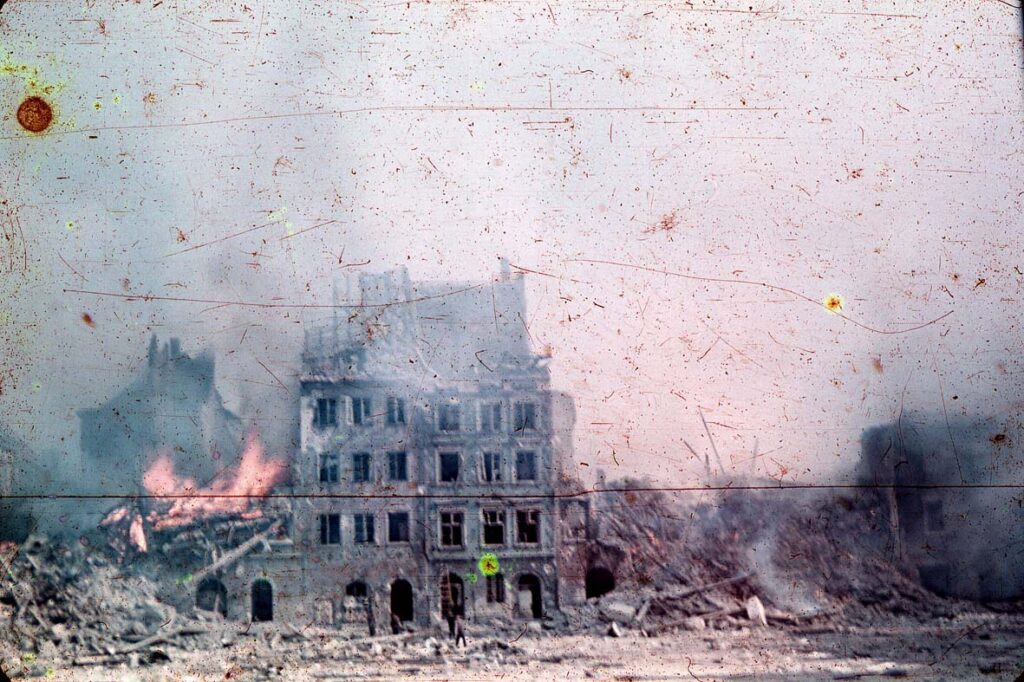 However, the flaws in using Bellotto’s works as a blueprint were latent. While hugely talented and famed for his intricately detailed scenes, Bellotto was notorious for taking artistic license. If he didn’t like something, he didn’t paint it. Instead, he’d add in things that weren’t there. His paintings were prone to exaggeration and plagued by factual inconsistencies: amazingly, these flights of fancy all made the final cut during the reconstruction process.

But just why did authorities reject more authoritative sources and back Bellotto instead?

The answer is perhaps best explained in Rafał Muranowski’s magnificent essay exploring the relationship between political ideology and Warsaw’s Old Town: “Bellotto’s paintings were thought to capture the spirit of an epoch instantiated by the artistic patronage of the King, a figurehead of the so-called Polish Enlightenment, an era with which the nascent PRL seemed to identify. Bellotto’s paintings, with their depictions of magnificent palaces rising from the midst of shabby wooden huts, were thought to encapsulate the optimistic spirit of a young and virile Warsaw, as yet un-ravaged by the excesses of untrammeled capitalism.” 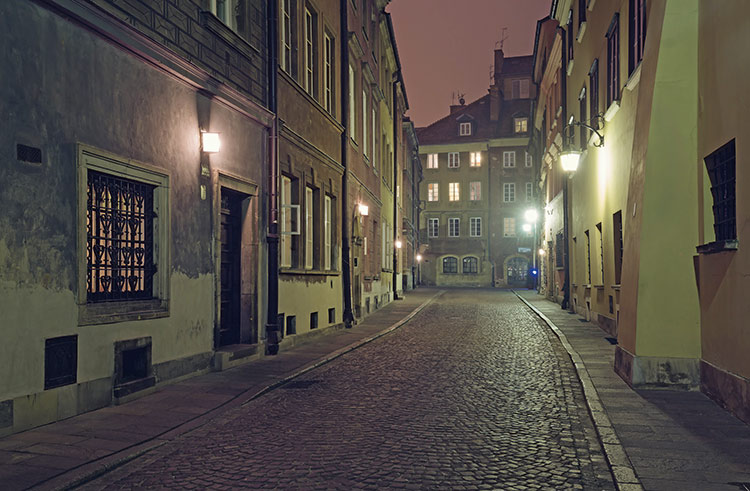 While the decision to rebuild Old Town was only officially rubber stamped in 1949, the necessary mechanisms essential to its rebirth were already locked into place. On February 14th, 1945, the Warsaw Reconstruction Office came into being, with the Department of Architectural Heritage established within its framework. Bossed jointly by Piotr Biegański and Jan Zachwatowicz, the two undertook a hefty project to list, categorize and preserve masonry that had survived intact – as a result, about 15% of today’s Stare Miasto is comprised of original Gothic and Renaissance fabric. 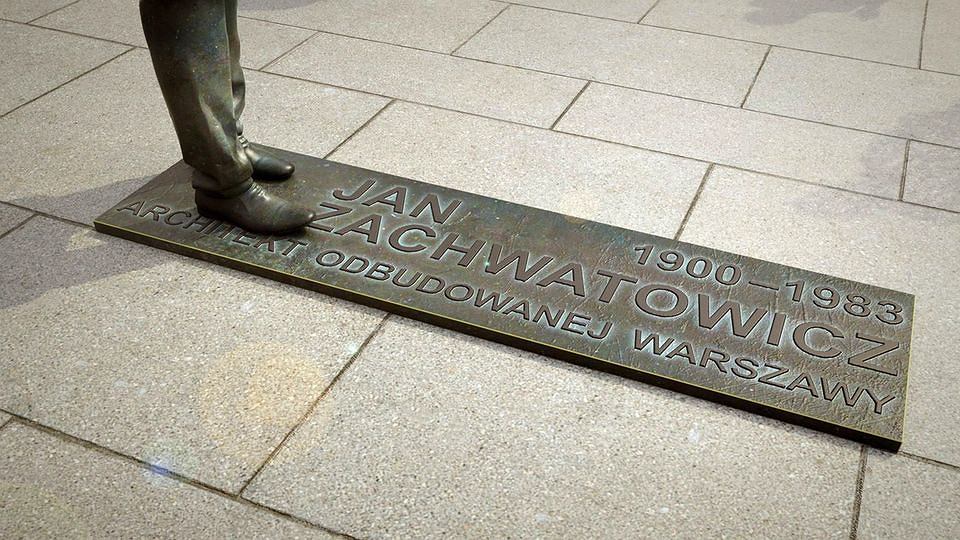 The work of the pair was also substantially aided by the enthusiasm of private homeowners who, as yet, had not had their homes appropriated by the government. It was on private initiative that the dwelling at Nowomiejska 10 became, in 1947, the first old town property to be completely rebuilt. At this stage, Old Town’s resurrection was still the subject of heated debate.

According to one anecdote, what remained of the east side of the main market square was slated for demolition, allowing for unimpeded views of the river. On hearing this Zachwatowicz ordered workers to reconstruct the burgher houses, and pronto. His hunch that the nabobs and decision makers wouldn’t want to offend the public by dismantling the finished article proved bang on. While visiting the Rynek, party leader Bołesław Bierut declared, “we cannot knock down what the working class have built.” 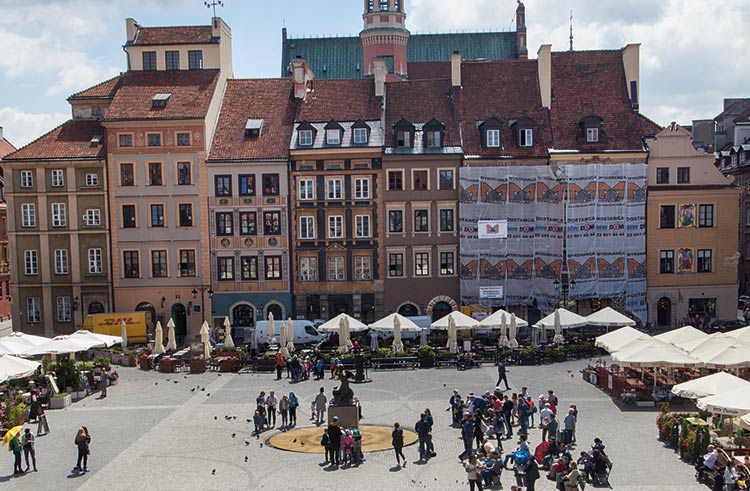 That was in 1949, the same year Phase 1 of the reconstruction was initiated. The plan involved the restoration of the Rynek, as well as connecting streets such as Piwna and Zapiecek. The work was meticulous and backbreaking: the removal of 500,000 cubic meters of rubble was conducted via hods and wheelbarrows, horse-drawn wagons, and a mini rail line.

The eventual arrival of a crane constituted headline news. To meet the demands of the reconstruction, plaster was imported from the Soviet Union, and gold leaf from the Czechoslovakia; at one stage, one million bricks were arriving daily from Wrocław. Finally, on July 22nd, 1953, the first stage was complete.

Whilst Old Town Redux didn’t necessarily correspond with the Old Town remembered by the natives, this wasn’t solely the fault of Bellotto’s embellishments. Some details were added on a whim: for instance, the doorway of Piwna 6 was accessorized with a flock of stone pigeons. These were appended in memory of a reclusive ‘pigeon lady’ who, in the immediate aftermath of the war, lived in the ruins and fed the birds. Other changes were more practical: streets were widened, and in some cases, buildings were reduced in height. 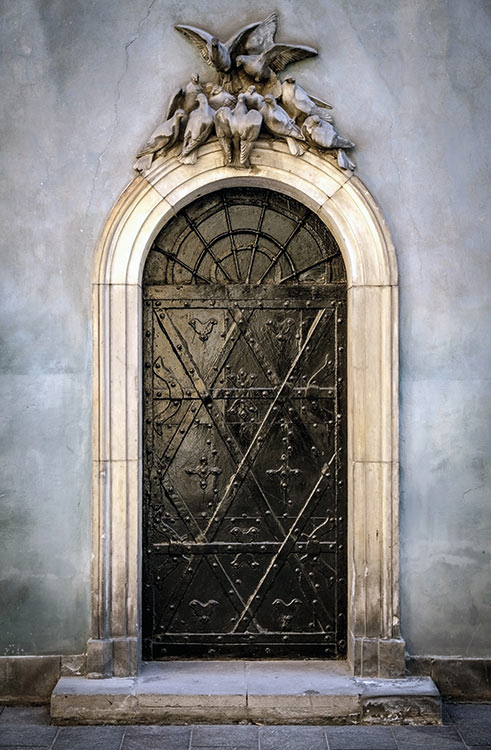 Of these ‘corrections’, perhaps the most palpable was the creation of the Trasa W-Z – a highway cutting below Old Town and connecting west Warsaw with Praga. The tunnel that rumbles below pl. Zamkowy was unveiled in 1949, and with it, Poland’s first escalator. Depositing its human cargo on the doorstep of Zygmunt’s Column, the ‘moving stairs’ really captured local imagination when they were first opened: photographs preserved from the launch day show a football-like crowd swaying and surging with wonder and glee. To this day, the escalator remains a quirky curiosity – check out the Socialist Realist reliefs lauding Soviet/Polish comradeship, not to mention a quaint set of rules forbidding kids from riding repeatedly up and down. 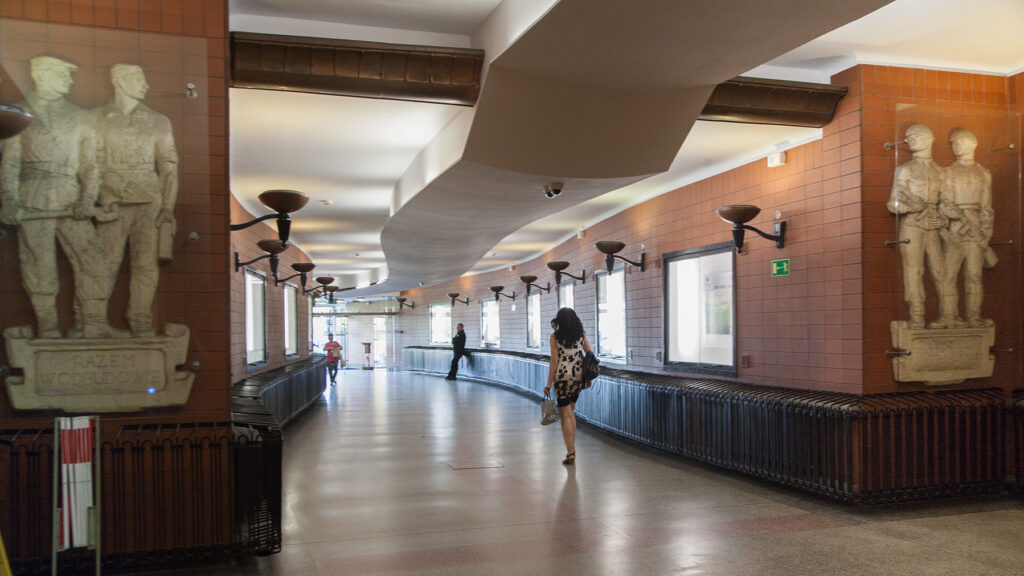 The political ping pong that followed Stalin’s death threw the reconstruction into chaos – other projects were prioritized, and work on Stare Miasto continued intermittently (the Royal Castle, would you believe, was only reopened as recently as 1984).

Nonetheless, the sweat and the tears paid off in 1980 when Old Town was inducted onto the World Heritage List, with UNESCO officials citing it as, “an exceptional example of the global reconstruction of a sequence of history running from the 13th to 20th centuries.” Others have not been so generous in their praise, with historian Marta Leśniakowska dismissing it as a “pseudo historical nature reserve.” 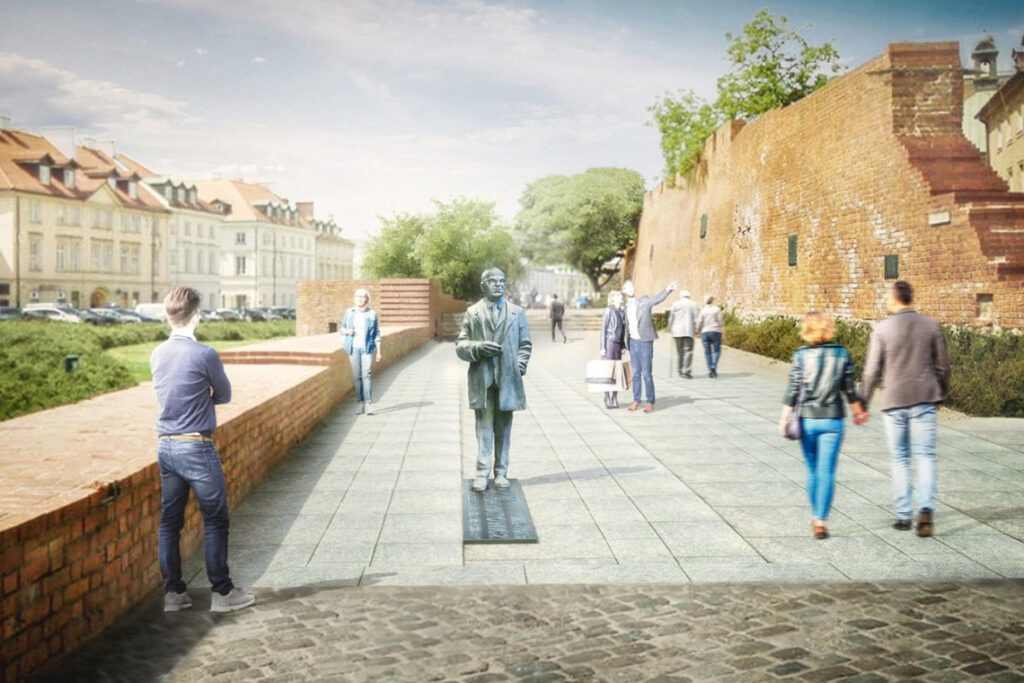 Yet while the area undoubtedly has a contrived air, it’s impossible not to admire the sheer bloody mindedness that led to its (re)creation. An unyielding statement of Warsaw’s indomitable spirit, it is nothing if not a triumph of human will. And for that, the role of Jan Zachwatowicz should never be forgotten.