The Insider journeys to Nałęczów, Poland’s favorite retirement home, and finds that all is not what it seems… (Text: Alex Webber | Photos: Ed Wight)

Of all the fantastic reasons to visit Nałęczów I can think of one: for the edge-of-the-world experience that is W Drzewach, a treetop dwelling right from the pages of Swiss Family Robinson. But today it’s fully booked. As it transpires, it usually is. After a flurry of phone calls we arrange an appointment to visit W Drzewach the next day for a quick tour and photo-op, but till then, and for the rest of our stay in Nałęczów, we’re just going to have to roll with it and find another story.

This is not as easy as it sounds. We’re standing roadside by the train station and there’s not a taxi in sight. There is a bus stop, but no indication anything will stop here before Christmas. The solitary figure wheezing next to it looks as sprightly as Gandalf. “He was our age once,” quips the photographer, “when he started waiting for the bus.” But what did we expect? A spa town of barely 5,000 habitants, Nałęczów has never been known for its fast pace of life.

So what is it known for then? In a word, water. Stories are vague and varied, but many point to one man: Piotr Celiński. Arriving to Nałęczów in 1817, this Warsaw professor analyzed the local H20 and swiftly declared it, “good for the body – inside and out.” Not missing an entrepreneurial opportunity, the local Małachowski clan set about building bathhouses and accommodation to cash in on the news.

Nearly two centuries on, their legacy survives. Nałęczowianka mineral water enjoys an Evian-style status across Poland, while the ‘healing waters’ discovered by Celiński mean sanatoriums – both new and old – do brisk business with those with heart ailments and circulatory disorders. It is not, you might gather, the place for a party.

But for us, things are looking up. The Bus Stop Gandalf, it turns out, isn’t there for a bus, he’s just hanging around to get away from the wife: “she’s always hiding my cigarettes,” he chuckles. Learning of our plight, he rings a friend to score us a lift into town four kilometers away. Even better, our little break standing on a dusty pavement has lent us enough time to sort out alternative lodgings. 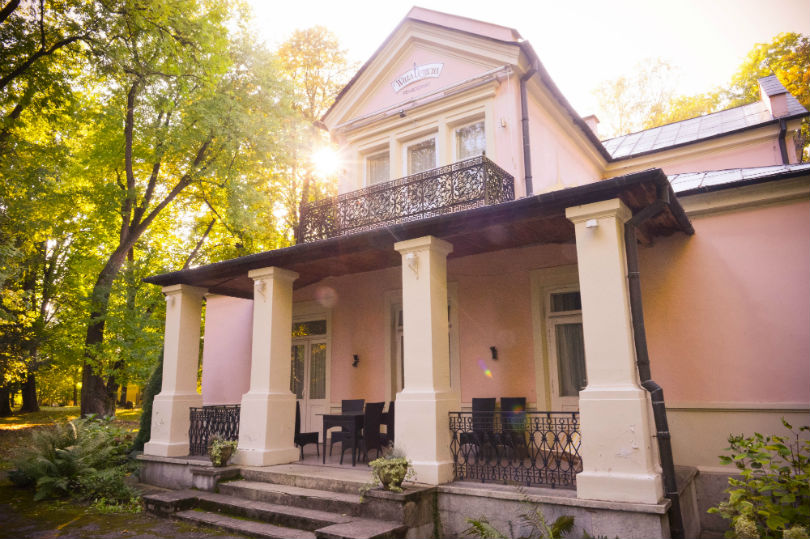 Willa Uciecha will be home for the night and first impressions are, if nothing less, interesting. Is it set in a garden, or a park, you can’t really tell. Appearing as a rambling old manor house, there’s not a surface inside that doesn’t squeak or creak. But faint and faded as it might be, there’s an air of grandeur to the place. Bolesław Bierut, the post-war Communist leader, took ownership of this property in the 50s, and in later years so too did restaurateur Magda Gessler – the surviving frills and flowers are testament to her presence.

After verifying that the photographer and I definitely won’t be sleeping together (“are you sure you want different rooms? Really, it’s ok if you don’t??”), the receptionist hands us big, jangling keys and leaves us be. My room is fantastic, with a four poster bed and double doors that open with a shudder onto a beautiful balcony. Yes, I think, I’ll take this for 180 per night. For a moment, I’m tempted to cancel the rest of the day and just stay perched up here with a doodling pad and beer.

But explore we must, and a short walk takes us into Nałęczów’s ground zero. That is Park Zdrojowy, a place of pristine lawns and ribboning pathways. It’s exquisite, and more so viewed in the languid glow of a smoldering autumn. Ducks quack about merrily (“Feed Me, I’m Hungry!” demand coin-operated duck food machines), while shafts of sunlight scythe through the trees leaving mosaics of color on the carpet of leaves. What sound there is comes supplied by the shuffle of strollers and the thump of falling conkers. The atmosphere is one of complete tranquility.

Picturesque sanatoriums ring this Eden, among them the ornate Old Bathhouse – to this day, it remains one of the top spas in town. Beyond, and the gently sloping streets of Nałęczów reveal lavish residences from days gone by; walking past, they speak of a prosperous town far removed from the general despondency of backwater Poland. There are museums, as well. Two to be precise, with both dedicated to literary heroes: Bolesław Prus and Stefan Żeromski. 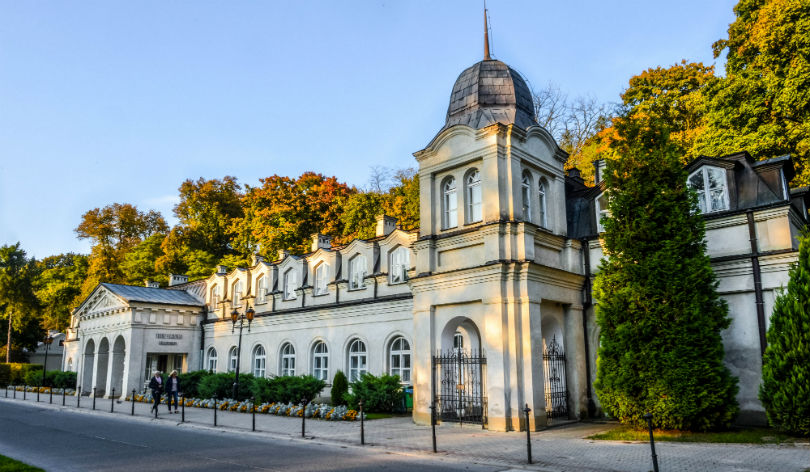 Staunch fans will thrill over the manuscripts and portraits, though in truth probably the most interesting detail are the buildings that house them – for Prus, that means the 18th century Małachowski Palace, while for Żeromski, the author’s small, wooden cottage designed in ‘Zakopane-style’. With culture imbibed, we head back to imbibe something else entirely at Roko on the fringes of the park. Evening has already settled and so to a thin, sullen mist that mirrors the mood of the rest of the town. Asking the barmaid what young people do in this town (and by that we mean anyone under seventy) she answers glumly: “there is nothing.”

Over cold Perła’s we hold a council of war and make the decision to head into Lublin for food and refreshment. Trains run often, but we spot a taxi that offers a fixed fee to Lublin of zł. 75. Bargain. Soon though, we realize it’s going to cost a whole lot more: possibly our lives. The drive combines aspects of a helter skelter and a bank robbery getaway. It is terrifying. By the time we reach Lublin we are white with fear and in no state to eat. Instead, we spend the rest of the night in U Fotagrafa, a classy multi-tap bar that soon soothes our nerves.

We wake the next day unsure how we got back, but nonetheless grateful to be alive. With W Drzewach chalked off in the morning (see overleaf), we organize one last diversion: a trip to Emilicin – a place we’ve learned about over the course of the previous night. Thirty kilometers south of Nałęczów, this small rural outpost is home to one of Poland’s enduring mysteries – an alien abduction. So the story goes, on May 10th, 1978, a local farmer, Jan Wolski, was minding his business when he came across what he originally mistook to be two foreigners on account of their weird vocabulary and slanted eyes. 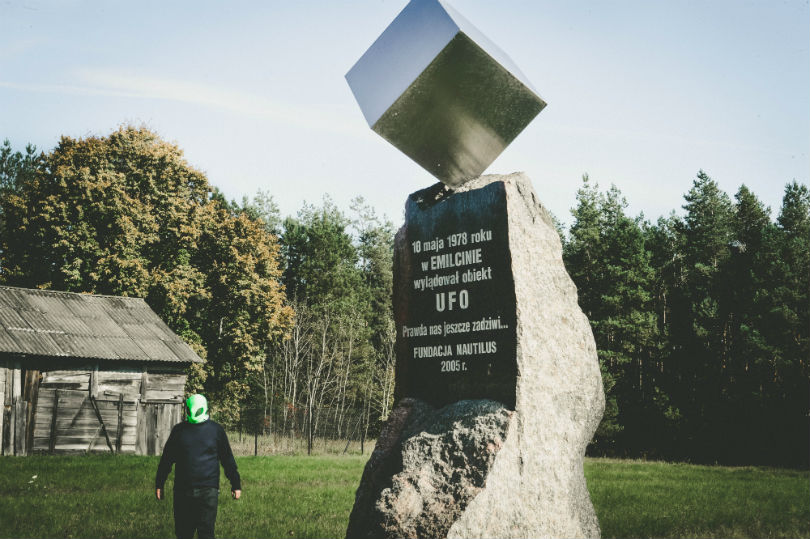 After offering them a lift in his horse-drawn cart, the next thing he knew he was being taken on board a hovering spaceship. Following a physical examination he was offered some icicle-like food (he refused) and then released. Alerting his sons to events, they are reported to have found strange footprints around the site later in the day. Additionally, the same morning a six-year-old boy is said to have seen a bus-shaped UFO hanging over a barn. Initially hushed up by the government, these chain of events have taken on a Roswell-like importance amongst Polish ufologists, and are commemorated by a small memorial at the site. Unveiled in 2005, part of its inscription reads: “the truth will astonish us in future.”

While there is little to see, it’s given us plenty to talk about. Returning to Nałęczów station, wisps of steam drifting over the battered, empty platform, I can’t help but think it’s been memorable trip – certainly different. Did I begin this piece saying there was one reason to visit Naleczow? I was wrong. Make it many.