A River Runs Through It | Warsaw Insider

A River Runs Through It

The Wisła isn’t just an ugly brown thing that splits Warsaw in half: head down it and you’ll find it flanked with secrets both open and hidden. (By Alex Webber | Photos Ed Wight)

“Stop! Stop right now!!” I’m usually quite reserved when sat in the passenger seat, but this was different. It was two years ago, and the girlfriend and I were driving back from Kazimierz Dolny. “Did that sign really say what I think it did?” I asked, my voice breaking into an excited squeak. It transpired it did: The Museum of Drunkenness & Cycling.

In the event, we didn’t stop: my enthusiasm cut down by a stony glare. “But I’m only interested in the bikes,” I protested. Still, no dice. Deflated, but not defeated, I filed a mental note to visit posthaste. Two years later, my chance came about.

It was one of those days: a replenished bank account, no looming deadlines and an itch to skip town. Over the course of the years, I’ve accumulated all sorts of tourist junk: books, bumph and atrocious souvenirs. A fair proportion of these were directly acquired in Kazimierz D., but practically nothing from its satellite sights. Recruiting a photographer, we sketched a plan that, keeping in mind the aforementioned museum, would use Kazimierz as HQ but also take in the surrounding area. This was to be a road trip of discovery around a Poland that, in many guidebooks, exists in name alone.

Take Puławy, for instance. Given no more than a cursory mention in anything other than industry magazines, it’s a town that goes largely unnoticed. But with the Warsaw-Lublin train running through it, it’s the best start point for those starting the journey by rail. While on the surface it’s mistaken as a mere transit point, a quick background check reveals so much more: e.g., the Trzy Korony, a riverside hotel with a brewery on-site. “Maybe,” it is cautiously suggested, “we should stay there a night.” 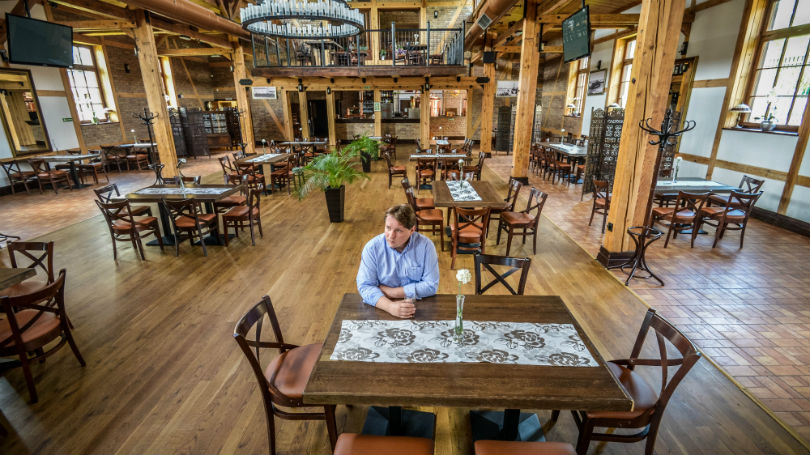 Checking in, we are instantly impressed. “How has this hotel only got three stars,” asks the photographer. Over the course of the next 24hrs this will become clear. For now though we’re happy with the lodgings and our trip has started well. Buoyed by that ‘just left Warsaw’ buzz, we immediately set to work.

The Museum of Drunkenness and Cycling is in a village called Gołąb. We are in Puławy. This is a problem because while I had mooted this as a road trip I can’t actually drive, and the photographer refuses. So taxi it is. Little over 10 kilometers separates A from B, but it says a lot about Puławy that our cab driver is bamboozled by our instructions. He stares, mouth agape, as if we’ve just asked to go to Brussels. The drive is slow and silent, almost like he’s expecting us to change our minds any moment. We don’t.

The museum is everything I imagined. We are dropped off beside a ramshackle barn, and as we have a furtive smoke by the gate a cheery man approaches us speaking at a million miles per minute. This is Józef Konstanty Majewski, creator of the museum. Ignoring the fact I’ve already told him my language skills are nil, he leads us into his inner-sanctum pointing at pictures and lecturing us in Polish. Nothing makes sense, and from what we can make out the museum is, in fact, a collection of rusting junk. But we love it. 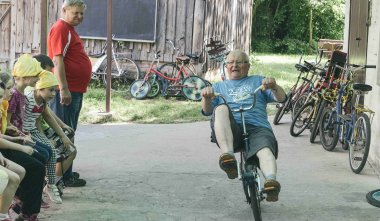 As a howling tribe of school children enter the premises, he takes turns bringing out bikes of all size and description: they are hilarious contraptions, and he demonstrates each by tearing around like a man with dynamite down his trousers.

There are flies the size of bats circling around us, but they go unnoticed. All eyes are on Majewski and his nutty machines – the kids are spellbound and shriek with delight. We do as well.

Facilitating our enthusiasm is Part 2 of the ‘museum’. Unlocking a garage door, Majewski reveals the Museum of Drunkenness. It sounds grand, yet in fact is an assemblage of his empties. But they are beautiful, glimmering under the cobwebs like a hoard of precious stones. As we leave our goodbyes are warm and sincere.

Back in Puławy the cabbie drops us outside the Czartoryski Palace. It is the town’s principal point of interest, a handsome residence where peacocks stroll the lawns. We’re just in time for a look about, and take stock of the interiors: the displays are of scant interest – the death mask of Zofia Czartoryska along with her beauty set; portraits of nobility; and collections of silver – yet there’s a real sense of charm. We walk in hushed reverence through Gothic-style halls and up intricate iron stairwells, trailed the whole time by a supervisor that’s a vision of grace. 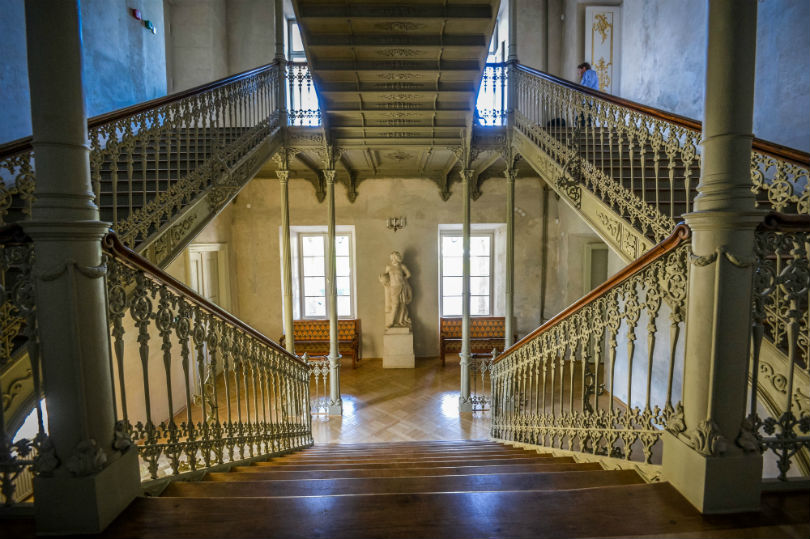 “We should be following her,” leers the photographer, worrying me slightly. Outside, away from the temptress, the surrounding park presents a pastoral scene: thick woodland interspersed with aristocratic whims – a Roman-style temple with stone lions gifted by Tsar Alexander I.

The sun has rolled past the yardarm, but Puławy feels sleepy. Returning to the hotel, we retreat to the terrace and its Wisła views. Enjoying the brewing facilities – but not the food – we idle the evening away as the skies turn maroon. The state of inner bliss is shattered the next morning: the new day is announced by the din of Disco Polo coming from the bar, and the fierce clack of bowling balls from the alley right below. Checking my messages, the photographer also has mishaps to report. Message 1: “no toilet paper in my room, I need to borrow yours.” Message 2: “too late.”

Check out: we lug our bags to the cab, this time with Kazimierz as the destination. Again, a short journey, and again, a look of bewilderment from the man behind the wheel. But the drive is beautiful, and takes in scenery swiped straight from fiction: it’s all cute cottages with smoke puffing out the chimneys, and the vivid, vibrant greens of the woodland all around.

Everyone, it seems, loves Kazimierz Dolny. Unfortunately, that’s part of the problem. While tourist hubs like Kraków absorb visitors, a town of 4,000 can’t. At times, you think Kazimierz Dolny will collapse into a sinkhole caused by the sheer weight of tourists. It seems though today we’ve struck lucky. It’s Friday afternoon and the square all but empty. Traders stand around scratching their heads. It’s not that the neon hula hoops and pirate hats that they hawk are rubbish, it’s just the demand isn’t there. I’ve never seen Kazimierz so quiet. For the first time I enjoy it. 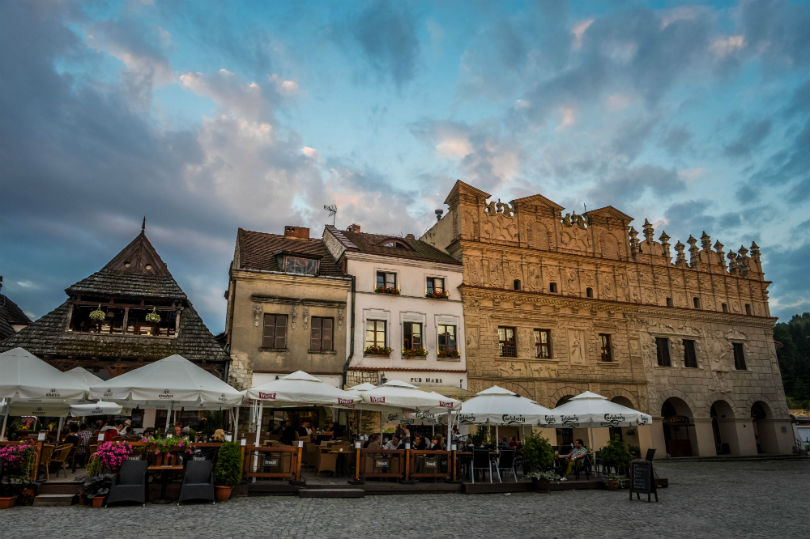 Confined by the Wisła on one side and a steep gully on the other, there’s no questioning the majesty of Kazimierz. Once a prosperous merchant town, evidence of its heyday is relayed by her architecture. Burgher houses line the Rynek, the most elaborate of which is Kamienice Przybłów. Completed in 1615, its façade is adorned with renaissance reliefs. Exploring the cobbled side streets we stop at the former synagogue, which today houses an evocative exhibition dedicated to the town’s once sizeable Jewish population.

But it’s not all gentle meandering. We hike up past the flamboyant Parish Church and to the castle ruins that are perched on the hill. The views are magnificent, and matched only by those at Three Crosses Hill. Standing 90 meters over the Rynek, the site is reputed to be an ancient burial ground, with the three crosses installed ever since the town made a miraculous recovery from an 18th century plague.

Slicked with sweat and pinched by mosquitoes, we recover the vestiges of our humanity at the Vincent hotel. A Provence-style pensjonat, we spend the rest of the evening dining on the terrace, sampling a menu devised by a protégé of Warsaw’s Wojciech Amaro. In between courses, Josefina, a bushy Maine Coon, prowls around the tables like a haughty princess. All is good.

But while the castle ruins of Kazimierz are well-visited, those of Janowiec, across the river, are not. We are bright-eyed the next day, and make the journey there. First though, we stop at the remains of the Jewish cemetery. Set on a steep slope, the gravestones lean at awkward angles long set by time. Zigzagging among them, one feels a sense of serenity and sadness. It’s a feeling that’s repeated at Janowiec.

Built in the 16th century, the cadaverous castle is eerie and still. Distant voices echo in the background and there’s an otherworldly feel as we walk through the shadows. While a program of restoration has been embarked upon, one can’t help but suspect it’s a misguided project – shouldn’t emblems of history be left in their natural state? It’s a question we ponder as we taxi it back to the start point: Puławy station. 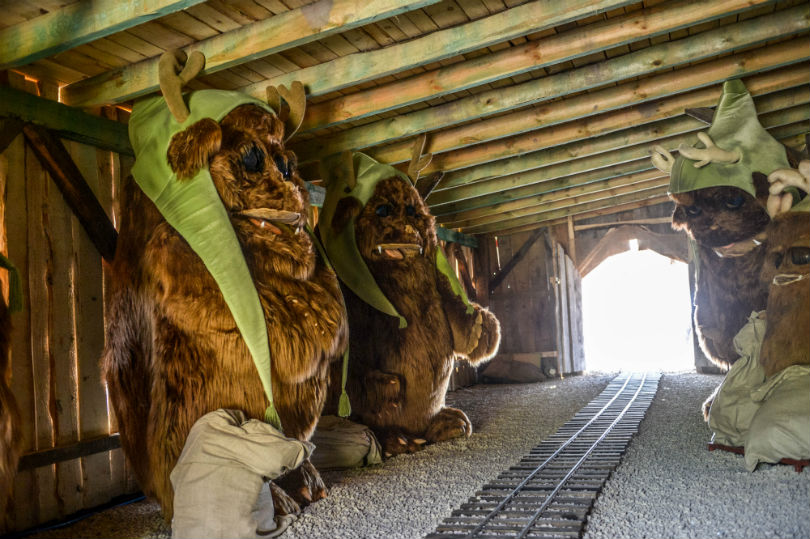 But if the idea for this trip was born from spotting a signpost, it comes full circle as we near its conclusion. Belting it down narrow roads the taxi screeches to a halt on the command of the snapper. “Stop, stop, stop!” He’s seen something. A sign. “Magiczne Ogrody” it declares. The Warsaw train can wait, what the photographer has seen warrants investigation.

The Magic Garden, we learn, is Poland’s latest theme park. Flashing our press cards, our efforts to enter for free meet pointblank refusal. Grudgingly, we fork out the zł. 29 entrance and are rewarded by a Mad Hatter world of freaky flowers and oversized carrots, old men in trees and giant Furbys in tunnels. For a moment I wonder who spiked my tea. As we roam amid the absurdities, each stranger than the last, we struggle to recall the reality of Warsaw. And who needs Warsaw after seeing this?