It’s not just smug nobility and writers you’ve never heard that get commemorated in stone. The city’s soft spot for animals has taken solid shape by way of numerous statues, memorials and wacky installations – with summer in full swing, take yourself on a safari with a twist…  ILLUSTRATION by Maria MILEŃKO

1. This doppelganger for the Loch Ness Monster aims to ‘seduce and scare’ with its ‘eerie sensuality’. Whatever ‘it’ is was erected as part of plans to revitalize the river. (by Most Gdański)

2. Legia fans claim this bronze circus bear is waggling his bum at their nearby rivals, Polonia. The truth is, no-one actually knows why he’s there. (Wójtowska 11)

3. Made from red clay and metal, this bison has been subject to recent surgery to restore a horn and tail. (Park Praski)

4. Standing around since 1981, this 13-meter giraffe aims to tempt kids into visiting the zoo. The whole frame is riddled with holes for birds to chill-out on. (Park Praski)

5. What do you do when you run out of street names? Ask local kids to pick one. That’s why, since 1954, Warsaw has had a street called Winnie the Pooh. (Kubusia Puchatka)

6. What looks like a duck is actually a princess that, according to legend, can only return to human form if a suitor fulfils a daft financial challenge. (Tamka 41) 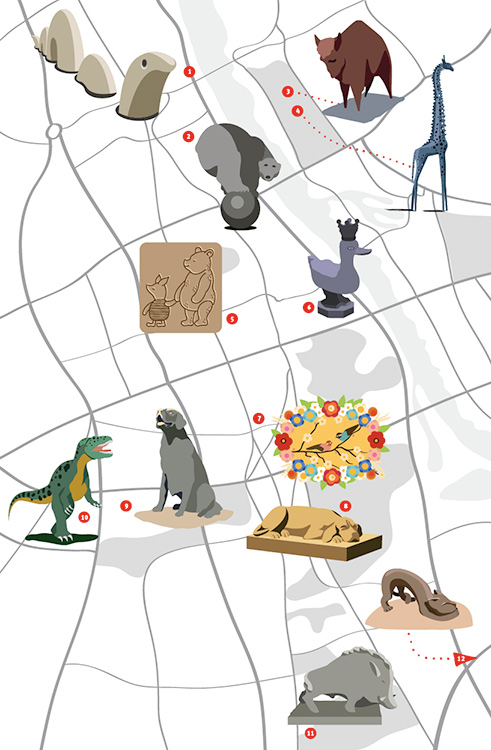 8. The dogs that once guarded Łazienki lie buried in close proximity to a statue of a drowsy Pointer that appeared in the works of novelist Adolf Dygasiński. (Organgery, Łazienki Park)

9. This park loves dogs so much it’s installed a monument of a smiling Golden Retriever called Lokat. He’s there to remind people that animals need love! (Pole Mokotowskie)

10. The university’s Department of Geology reminds everyone of their existence with the most underwhelming Jurassic thrill ever recorded: a life-size Allosaurus. (Żwirki i Wigury 93)

12.  Cyril the Cat (named after an internet poll) brings attention to the plight of homeless moggies whilst also encouraging wider respect towards the feline specie. (Park Nad Balatonem)