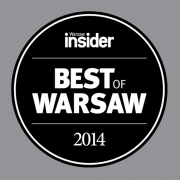 It was sometime over summer, and all was quiet outside: the city on the eve of another national holiday. But while the rest of Warsaw was traveling to the lakes or the coastline, the Insider was traveling somewhere even better: heaven. We were in Senses, and what had started as quite an incredible meal had just reached new heights with a swordfish served alongside leek finished with squid ink. Then, out of nowhere, emerged Andrea Camastra carrying a container of billowing sea essence – under a thick fog of swirling ocean mist the rest of the course was concluded in something approaching reverential silence.

If pushed to name a culinary ‘moment of the year’ it would be that – a beautiful, almost holistic experience that combined art with nature and science with showmanship. It was, in a nutshell, everything that defines Senses. Just as much, it was a determined demonstration of the talents of Andrea Camastra, an Italian-born former model who has worked at Michelin mainstays such as Le ChateauBriand and Le Mirabelle – closer to home, he was one of the unsung foot soldiers behind the original success of Atelier Amaro. Now at the helm of his own kitchen / laboratory, Camastra’s flair is exemplified by way of a menu that – much like its author – is daring, brilliant and completely unpredictable.