Into the Deep | Warsaw Insider

rzeszow1 travel46 trips1 weekend132
The Insider journeys into the depths of the South East of Poland, and uncovers a bright, shining star: Rzeszów… (By Alex Webber | Photos...

The Insider journeys into the depths of the South East of Poland, and uncovers a bright, shining star: Rzeszów… (By Alex Webber | Photos Ed Wight)


Poland’s a big place. Not on the map it isn’t, but on the train it sure feels it. You want to go to Rzeszów? That’s seven and a half hours. Seven and a half hours of bump and bounce and grinding boredom. Still want to go to Rzeszów? Maybe not then. Now though, there is another way. Flying with LOT takes half an hour, less time than it takes to get to Chopin Airport in some instances. And it’s cheap. Booked in advance the journey is little more than zł. 150.

It’s interesting, as well. The plane is full of mysterious people. An enigmatic blonde with an elaborate dragon inked on her back glides down the aisle and purses her lips as if to suggest, “I’ll see you on the other side.” In front of me an American with a crew-cut is reading about mind control methods. My luck is out though, and I spend the flight sat next to a nervous wreck who spends his time praying between twitches. Does he know something about this flight that I don’t? If he does, then his information is erroneous for the journey is seamless. I’ve not even gone ten pages into my book before we’re preparing to land.

I expect the airport to be a basic affair, the kind of place where security awaits arrivals by sucking on straw while sat on bales of hay. But the airport is modern and glints in the July heat. Travelers arriving from destinations like Frankfurt, Barcelona and some Irish city the airport pamphlet calls Bublin will have seen worse. The taxi journey, meanwhile, is a swift 20 minute affair. Before we know it, we’re already in town, passing a phallic 1970s monument commemorating the revolutionary uprisings the locals have fought in. “We call it The Big Clitoris,” smirks our driver. Thirty-eight meters tall, this concrete vulva is a startling introduction to the town we’ve rolled into. 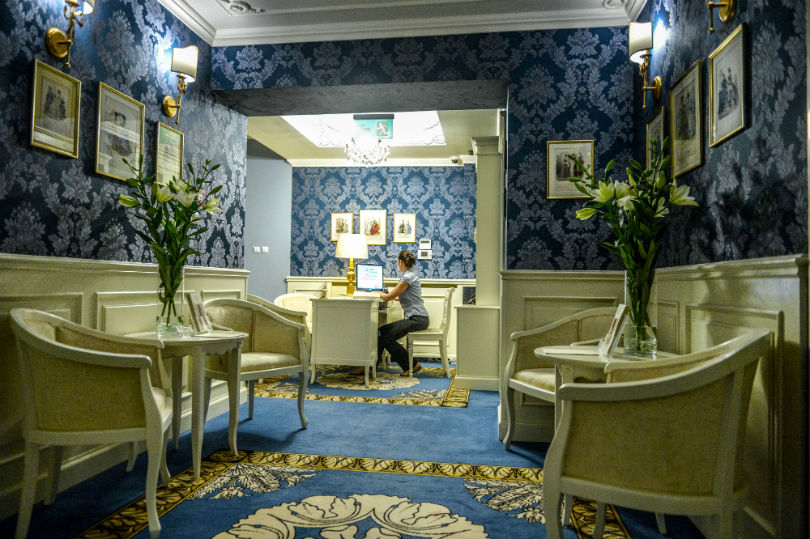 We putter to a halt up a narrow, cobbled alley. For our first night we are booked into the Schanel Residence (schanelresidence.com), a privately run boutique hotel with a 19th century style that’s both feminine and French. On the bedside table is an elegantly penned Victor Hugo quote. Refreshed, we go exploring. The hotel is around the corner from the Rynek, a long, oblong town ‘square’ whose crowning point is the town hall.

Originally built in 1591, but remodeled several times since, it’s a fairytale construction – so sweet you could eat it with a spoon. You could say that for the Rynek, as well, but you probably won’t. In fact, you’re lucky to see it. In a sheer stroke of lunacy the town Gods’ have left the bars to run riot, and instead of a magnificent view of mercantile tenements one is left bewildered by a phalanx of parasols and restaurant umbrellas. We console ourselves with the knowledge there’ll be no shortage of pubs.

It’s already too late to do anything of note, so checking out the hostelries becomes our primary objective. There are millions of them, and many of them are good. In Ceska Hospoda we drink foamy Czech brews amid Karol Gott album sleeves. In their neighbor next door, we take our pick from Poland’s top craft breweries. It’s Thursday night, but in buzzing Rzeszów the weekend has started. 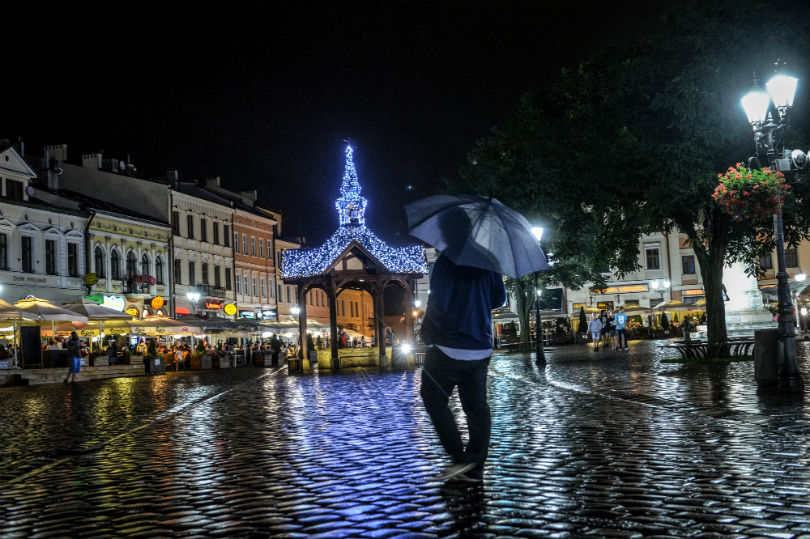 The weekend feeling doesn’t fade with dawn the next day. We wake to find a Rynek that’s empty bar a solitary delivery man clunking beer barrels about. No-one is out and it feels so provincial. Suiting the quiet mood lies a small memorial park behind the Schanel honoring those deported to the camps during the war. Even the tramps who have gathered on the lawn seem to appreciate its importance, and they talk in subdued whispers barely audible over the pigeons. The two former synagogues beyond are further reminders of the trauma Rzeszów suffered. Fourteen thousand Jews (among them Natalie Portman’s ancestral family) lived here before the war – one third of the town’s population – yet fewer than 100 survived to see its end.

Our Friday morning gloom lifts though with the sight of the Museum of Bedtime Stories. Housed in a theater, it’s a hilarious traipse through the world of Polish animation. Vaguely nonsensical and completely irrelevant to outsiders, it’s a joy nonetheless. We peruse the collection – a giant cuddly Krecik (a friendly Czech mole), Moomin posters and other cheery icons of PRL youth. 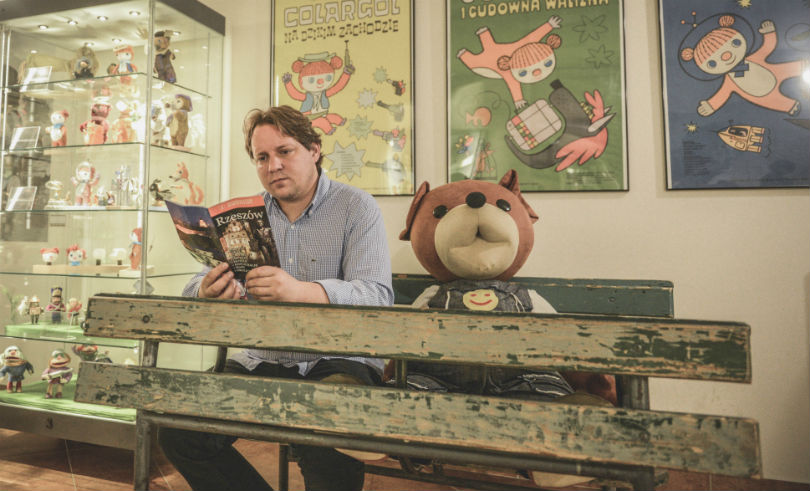 But the day takes an unexpected twist. As we lug our bags to the next hotel, I receive an unwelcome phone call – a freelance assignment that can’t be postponed. There goes my afternoon down the pan. The news is not entirely negative, however. Our new lodgings in the Bristol Hotel (bristol-rzeszow.pl) are fantastic: high modernity fused with a regional style – colorful peasant patterns on the cushions and ceramics, next to cool little touches like the semi-private courtyard outside my room. Usually, when I travel, there’s no time to enjoy the hotel. This time, there’s plenty.

It’s among the best hotels I’ve been in, a point confirmed when there’s a knock on my door – my Lord, if it isn’t a bag of beer from the in-house microbrewery. It’s a goodwill gift to apologize for my room not being ready on-time, and it’s gratefully received. Work has never passed so pleasantly. With my deadline hit I arrange to meet the photographer in the sushi restaurant downstairs. All this time he’s been left to his own devices, and this is a bad thing. The man is plastered. 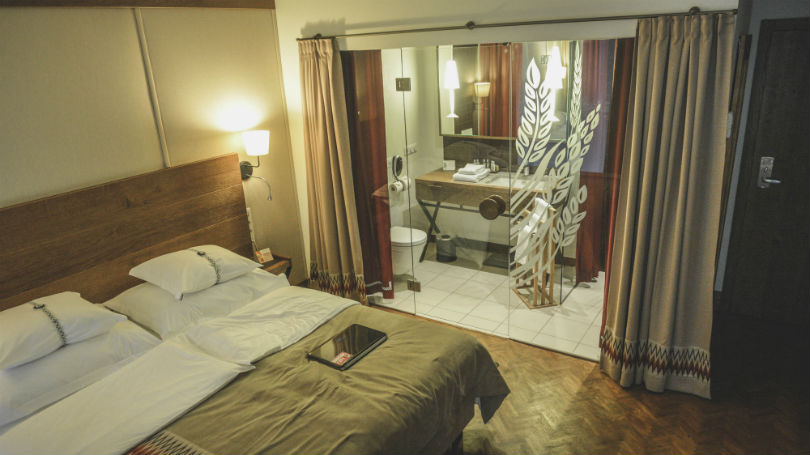 Worse, he’s had an accident of sorts. His belt has broken while serving as a safety rope during a cigarette smoked whilst ‘hanging from the window’. Resourcefully, he’s made a DIY replacement. “Look at this,” he announces. Lifting his shirt for Joe Public to see, he reveals a computer cable entwined around his trousers. The guy next to us drops his chopsticks at the sight.

With time to make up we hit Rzeszów’s sights at a canter. First, around its award-winning underground route, a subterranean trail of 369 meters. Taking in cellars dating from the 14th to 18th century, the labyrinthine passages take us past brickwork marked with the fingerprints of medieval craftsmen, and scorched-looking walls from the Great Fire of 1842.

Outside again, we wander the main high street, 3 Maja, which in itself is not short on curios: for example, a life size statue of musican Tadeusz Nalepa in mid-stride. Elegance is provided by the smart whitewashed churches that line the street, a sight demeaned slightly by the kebab shops that flank them in poisonous, neon clusters.

But the reason for our ramble soon becomes apparent: the Lubomirski Palace and the nearby Lubomirski Castle. Designed for the local powerbrokers (you’ve guessed it, the Lubomirski family), the castle nearly rivals Wawel. Used by the Nazis as a prison, it astonishingly served a custodial function up until 1981. The moated bastion is fearsome in scope, but already closed for the day. So too the baroque Palace, which is a relief of sorts – the truth is we are too exhausted to investigate either. It’s not a great loss though, because we know there’ll be a next time – after all, we are only 30 minutes away.