alternative89 Communism25 neon10 neon lights1 praga111 prl49 public art28 warsaw16
Embraced by the hipster generation, the art of neon has enjoyed an unlikely revival. At the center of this resurgence is a small little...

Embraced by the hipster generation, the art of neon has enjoyed an unlikely revival. At the center of this resurgence is a small little workshop operated by Jacek Hanak…

Warsaw, Targówek, ulica Rzeczna. Our fellow bus passengers have dwindled until it is just the photographer and I who emerge into an unloved, rusting part of Warsaw. The only sound is the siren of a distant goods train. The road is losing its battle with the potholes. On the face of it there is nothing here to see, but in the middle of a crumbling industrial park is the beating of heart of Warsaw’s neon lights renaissance.

The workshop is an explosion of glass and color. Neon signage from the city looks down at us from every angle. The large Radio Telewizja sign from the new bookshop of the same name is back for some final tweaks. Galeria Wypieków looks great in neon blue, and all around are smaller signs enticing us into transgression such as Bar and Wódki. 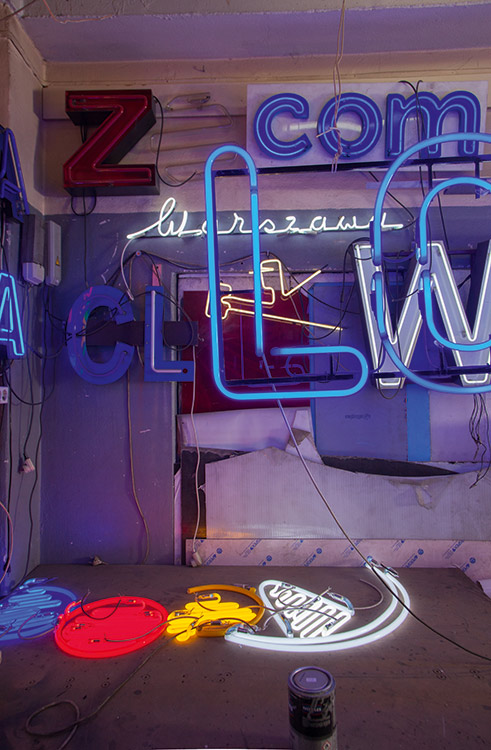 “Fifty percent of all new neon signs are made here. Some other places do neon but they do other things as well. We only do neon lights.” Jacek Hanak, an intelligent, friendly man and the owner of HANAK Reklama, has worked in neon since 1976. He saw the end of Warsaw’s golden age of neon, lived through its dark ages in the 1980s and 1990s and has been at the center of its revival.

The first neon sign in Warsaw was put up in 1926 on the corner of Marszałkowska and Al. Jerozolimskie and depicted a beer bottle with the word Porter. Since that time, the craft has changed little. “We use the same gases and the same method to bend the tubes. Sure, the lighting system has changed, but that is something different,” explains Jacek.

“There are no guidebooks or manuals on how to make neon. You have to learn it by seeing and doing. You learn it over decades.” And here is the paradox: it is a graphic form adored by Warsaw’s younger generation yet one dominated by older men who appear to be a dying breed. A walk through South Śródmieście’s fashionable streets confirms the popularity of neon among hipster hangouts, with the new green Japanese girl adorning the entrance to Youmiko Vegan Sushi on Hoża, made by HANAK Reklama, being the perfect example. 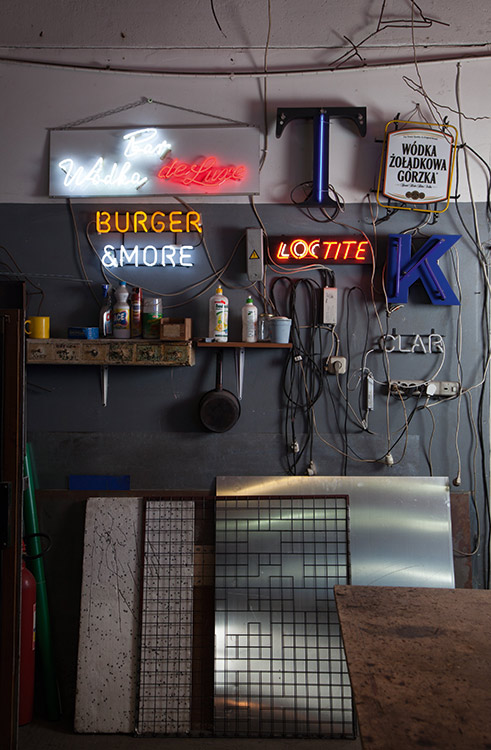 The tour of the workshop does not take long and we retire for a chat into the small back office, which doubles as a staff room. The other lads file in, open their lunch bags and eat their sandwiches in disciplined silence. I ask Jacek to tell me about Warsaw’s golden age of neon. “It was a time when outstanding artists were working in neon. The city looked completely different at night.” Why was neon so popular? “The authorities launched a program called the ‘neonisation’ of Warsaw. Warsaw had been in darkness since the war and they wanted to bring light to the city and make it Europe’s capital of neon.”

Whole streets and even districts were ‘neonised’ and it was a time when some of Warsaw’s best-loved neon signs were created, like the female volleyball player on Plac Konstytucji and the blinking cow with a bottle of milk by the milk bar on Krucza. Looking at old photos of the rebuilt parts of Warsaw from the 1950s and 1960s, I often have the impression that city looked better then. Jacek agrees. “Neon provided a uniformity and simplicity that made the city look nice. Neon is made to last many years, but most of the advertising now is cheap looking and there is no overall concept. Now, when a shop opens they cover all the windows with plastic foil and it looks like the place is closed for refurbishment.” 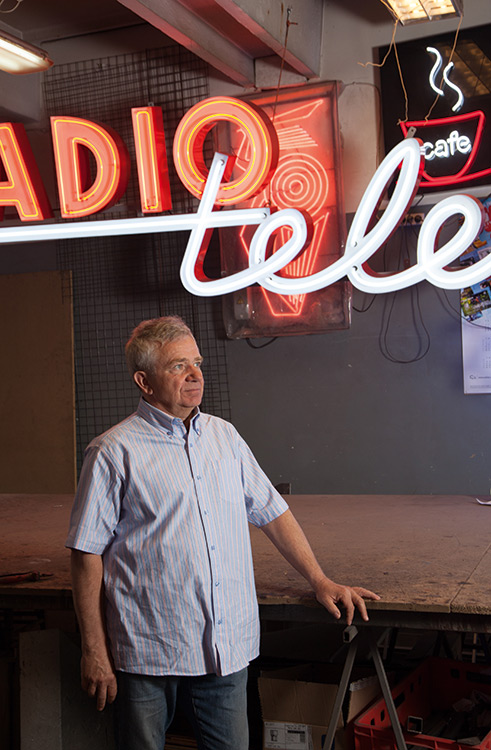 The time for the personal photographs approaches and the men start to look at each other nervously. One of them has already backed out. There is still a chance for a few more questions, though. Do they break down a lot? “Once they have been put up they are very reliable. We don’t encourage any of our customers to sign a regular service contract.”

Are they expensive to operate? “No. An average size sign might cost the owner about 70 zlotys a month to illuminate.” Are most of your customers bars and restaurants? “Not really. A large number of them are museums, theatres and other cultural institutions. We even do smaller ones for private homes. In general, our customers are not rich but they have a lot of sentiment for neon and they also understand how practical it is.”

The re-emergence of neon as an effective form of advertising after the plastic-dominated 1990s has been accompanied by efforts to save classic neon from buildings that no longer exist and also to secure the designs and archival drawings, which are an important record of Warsaw’s modernist history. 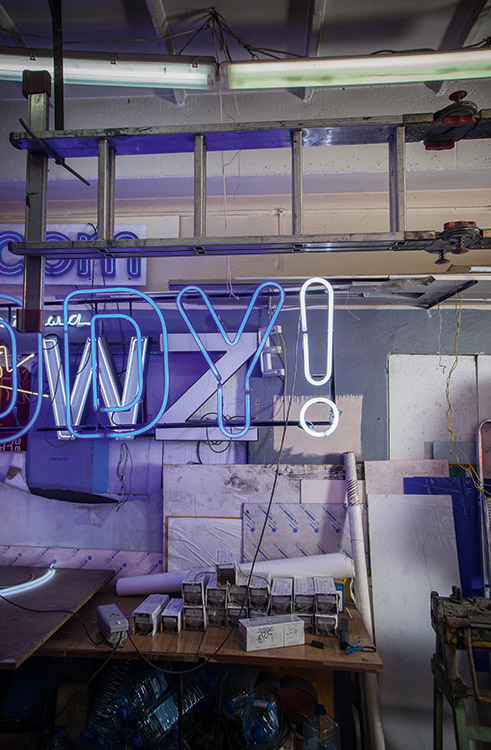 Jacek has been involved in both cases. “When people want to restore old signs, they always come to us. I tell them that they have come to the right place because we made the sign originally years ago.” He was also able to hand over a thousand kilos of documents and drawings to the Museum of Modern Art in Warsaw. How do you see the future for neon? “Positively,” he says in a flash. Jacek has been described as the protector and continuator of Warsaw’s neon legacy, an epithet that sits uncomfortably on this modest man. Yet his passion is clear and burns as bright as any one of his many neon creations. 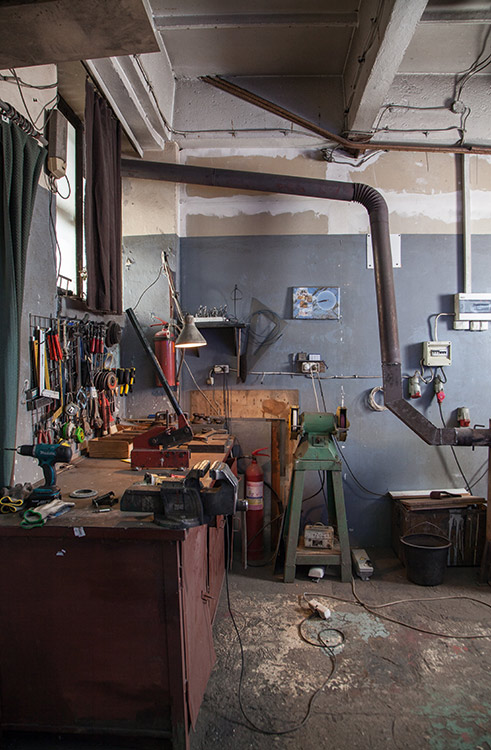