WI: What makes dogs perfect for Search & Rescue? CGPT: They have 300 million olfactory receptors in their noses compared to the six million...

Working in wind, rain, snow and sun to locate those that have gone AWOL, we meet the four-legged (and two-legged) heroes of CGP Tropiciele, one of Warsaw’s active Search & Rescue units.

WI: What makes dogs perfect for Search & Rescue?
CGPT: They have 300 million olfactory receptors in their noses compared to the six million that humans have. The part of their brains that analyzes smell is vastly greater than ours in proportion to their brains, so essentially they ‘see’ with their noses. Moreover, they love using this skill as it’s one of their core instincts. 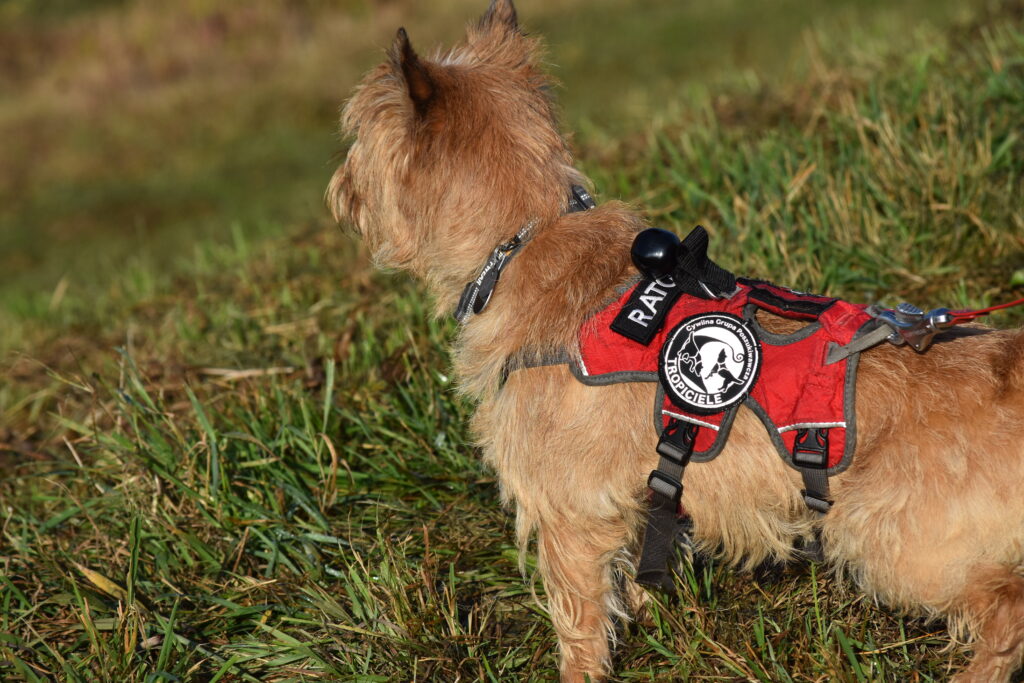 Most dogs also enjoy playing, interacting with humans and being rewarded which makes training very enjoyable for them. In a nutshell, that makes them perfect for SAR tasks as it’s not just something they’re exceptionally good at, but also something they genuinely love doing. 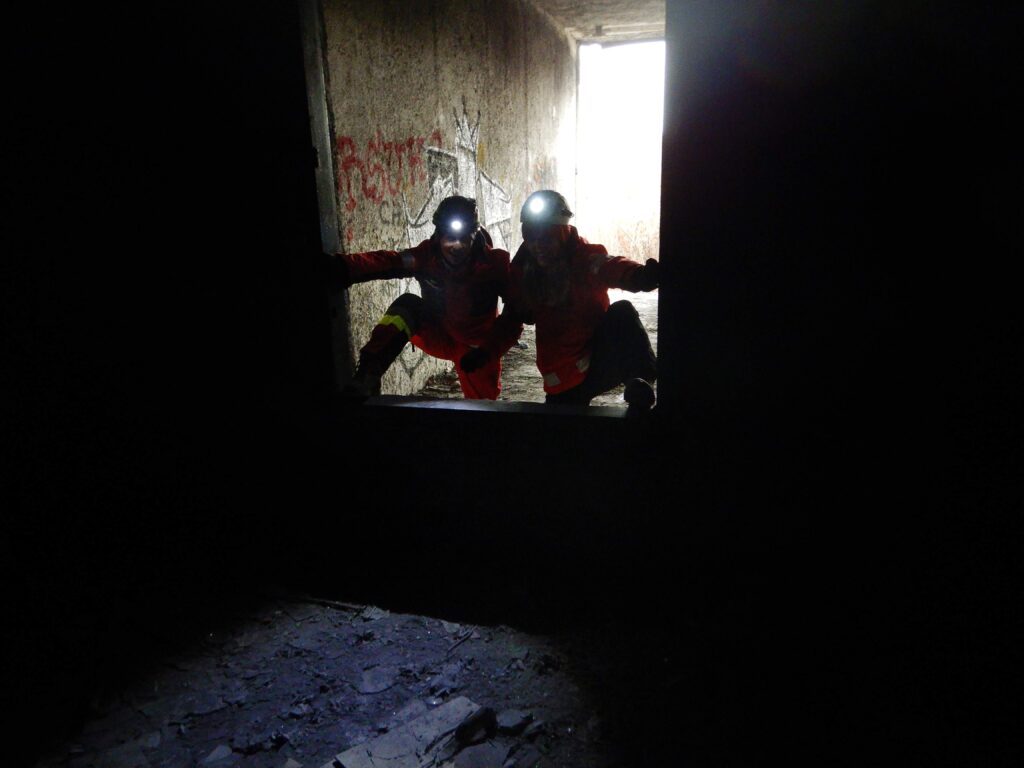 So dogs are better than humans, right?
One dog has the potential to be more effective than 20 people in an area search. A well-trained dog will take around 15-minutes to cover a space that would take 2-hours for people to to search – and that’s just one dog. When you’re talking about a group of dogs, you can get an idea of the amount of time that can be saved. This is crucial, as when someone goes missing every minute counts. 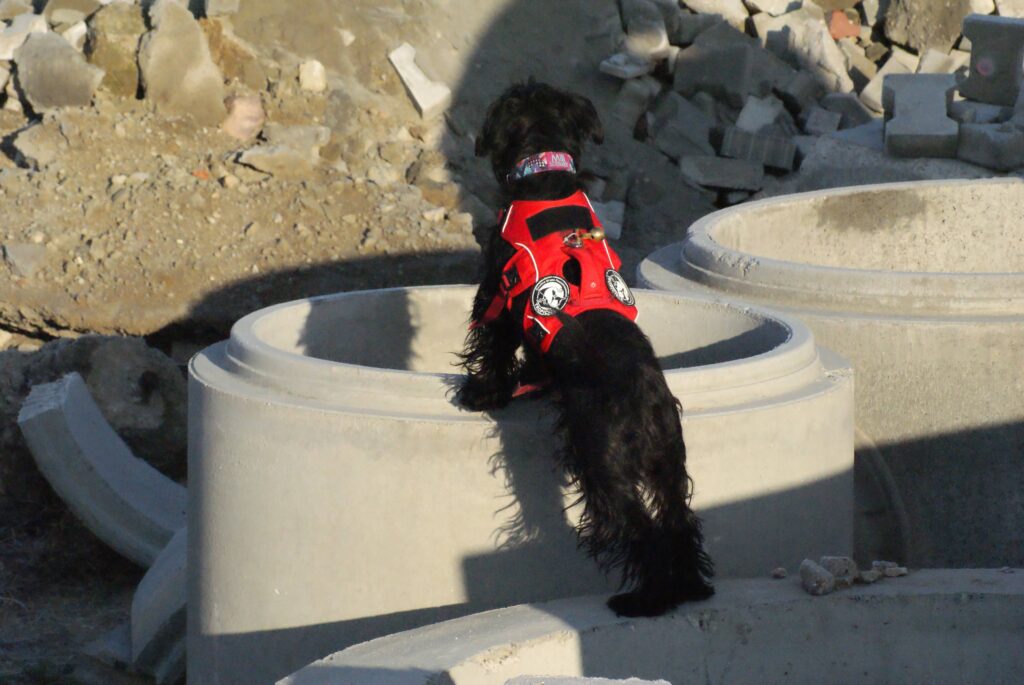 How did the CGP Tropiciele group come about?
Our founding members met by chance in 2015 at an amateur tracking class – some were there because they had hyperactivity issues with their dogs and were looking for way to keep them ‘busy’, others because they were simply looking for new and exciting things to do with their dogs. We found ourselves hooked and things snowballed from there – working under the guidance of highly-respected trainers, we created our own group. In 2017, our organization was registered as an NGO. 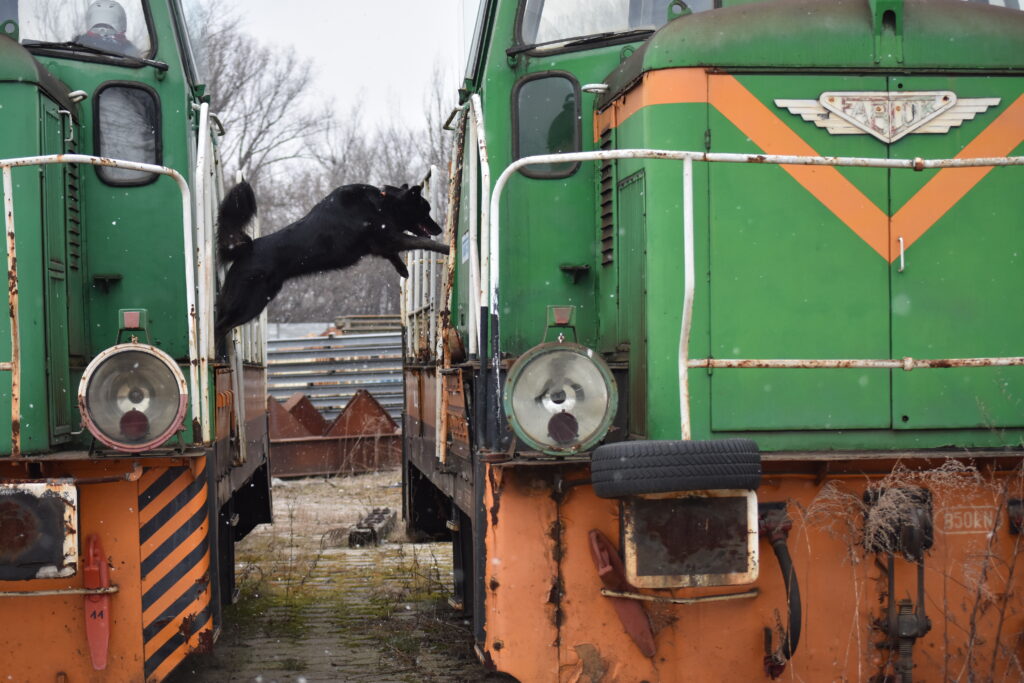 How are dogs trained?
At first it doesn’t involve much more than playing. The aim is to introduce the dog to as many people and new situations as possible whilst making the experience as fun for the four-legged recruit as possible – one of the key requirements is for the dogs to enjoy company and to feel comfortable in different surroundings. 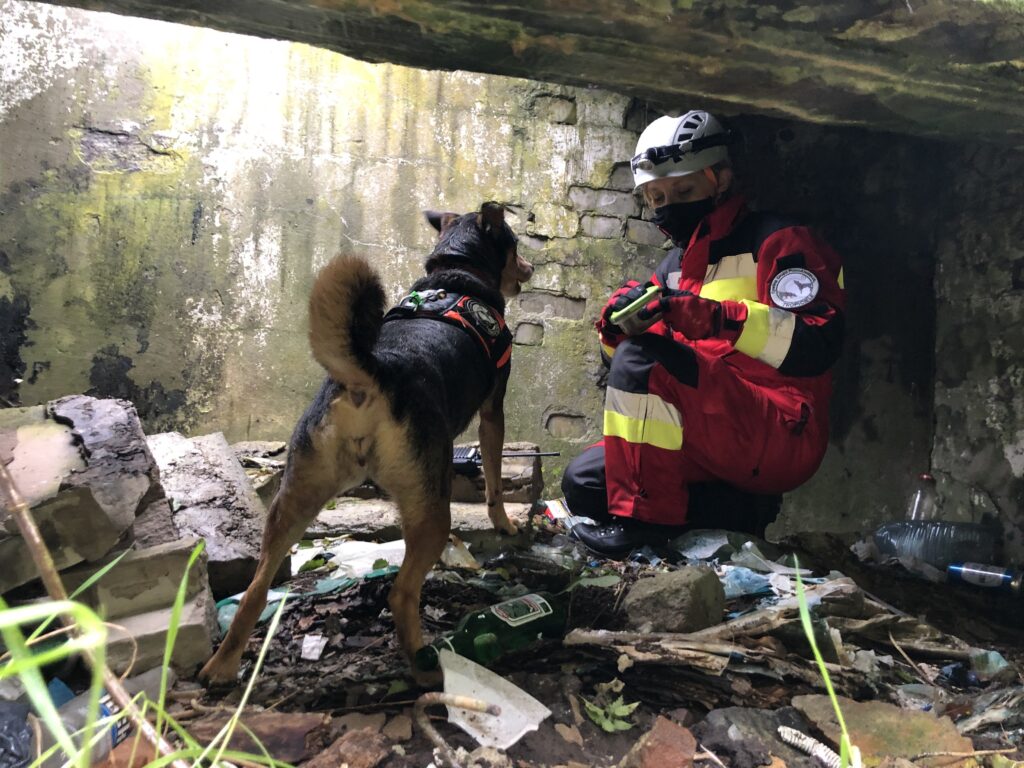 Sounds easy!
It gets harder at the second stage, that’s when dogs are trained to specialize in the discipline that best suits them: whether it be wilderness searches, rubble, or tracking. We’re simplifying, but in essence this is done via field exercises that involve the dog seeking out hidden people and then being rewarded once they’ve done so. The exercises become more complex with time. Finally, they’re trained to issue a signal (usually a series of barks) to alert their handler once a person is found. Only once these steps are mastered will a dog be ready to take state certification exams. 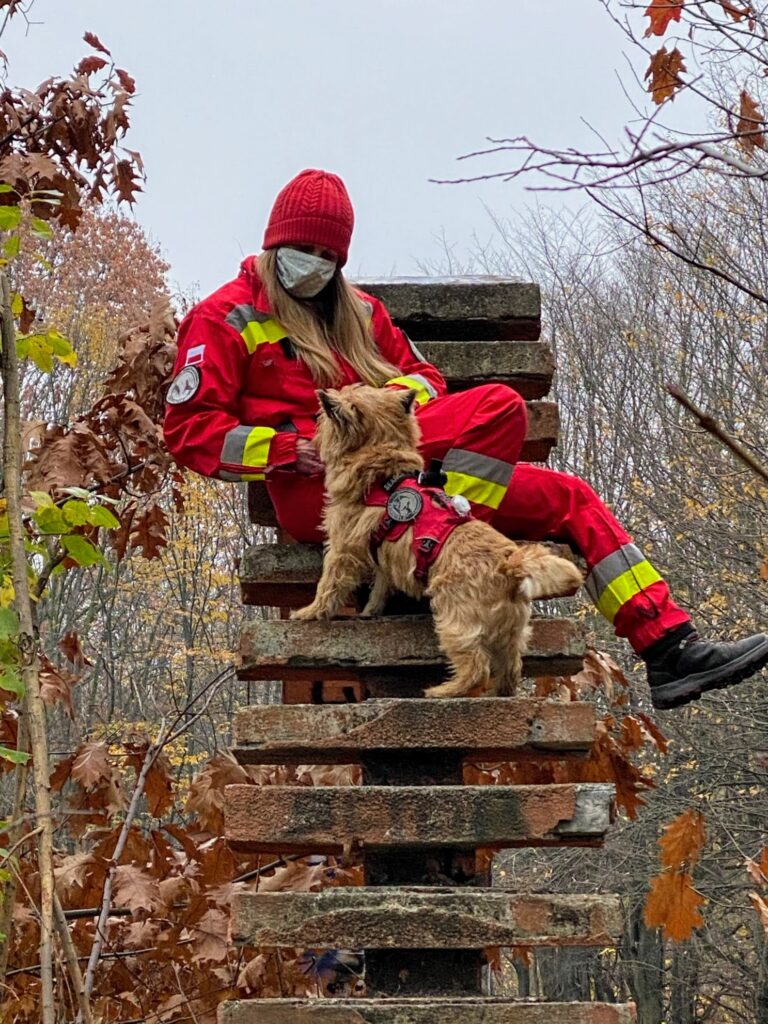 And that’s that?
Certification needs to be renewed every year so we’re constantly training. It’s not just the dogs that need to keep their skills up-to-date, either. As handlers, we constantly work on improving our navigation, medical knowledge, planning and tactical skills. Success depends as much on a handler as it does a dog, so the seamless cooperation of the entire group is essential – teamwork is everything. 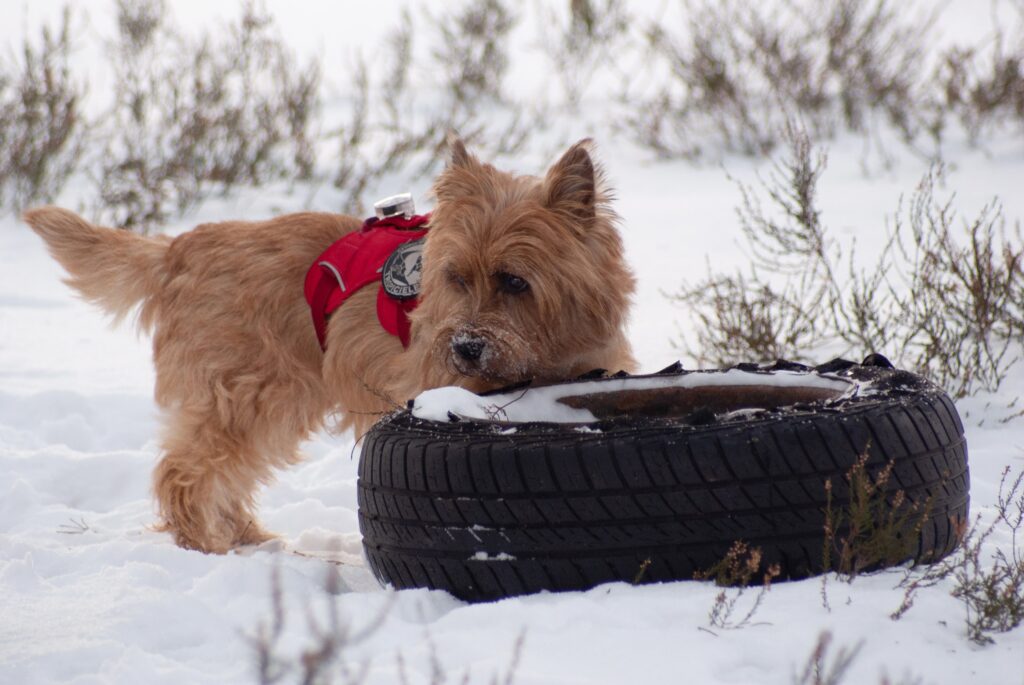 Does my dog have what it takes?
It depends – your dog needs to be on board with the idea. Ideally, it’ll be healthy, playful quite young and enjoy contact with strangers. A good SAR dog will be comfortable in new situations and be incredibly motivated by food and toys – training is reward-based, so it helps if the dog is greedy! Of course, any sign of aggression and your dog is out. 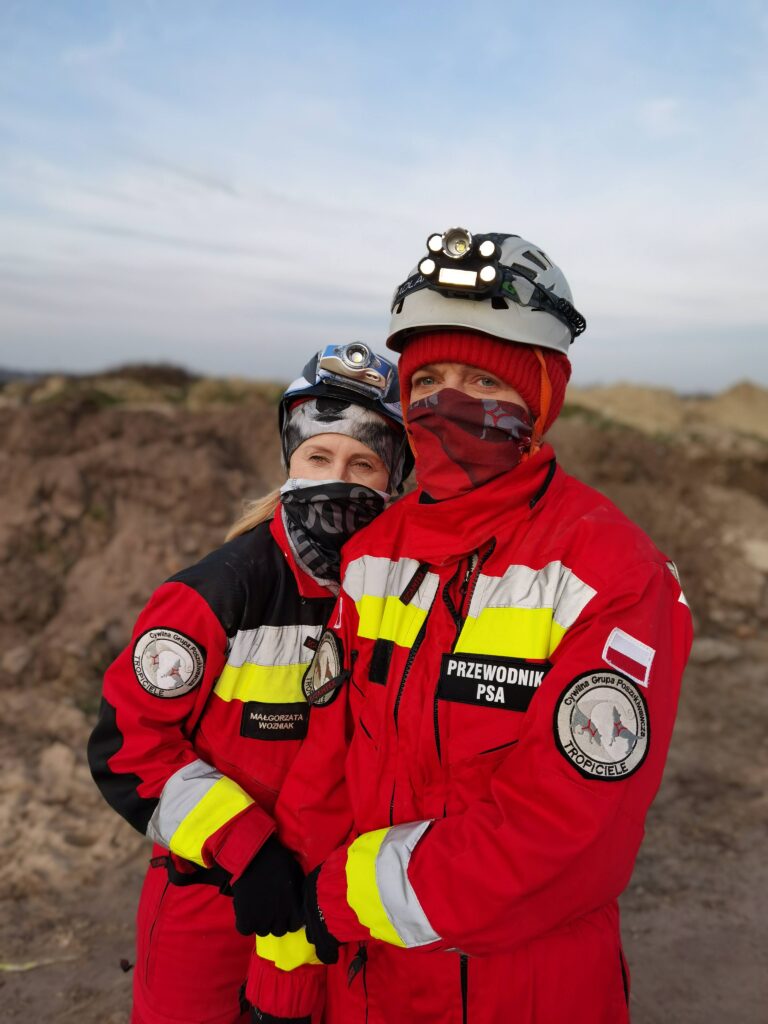 How do I join a SAR group?
Fish around online to find a group that’s recruiting. But before you do so, ask yourself if you really want this. Expect to be training at all times and in all kinds of weather conditions. In real life, call-outs for missing people quite often happen late in the evening as that’s when people tend to realize that a loved one is missing. 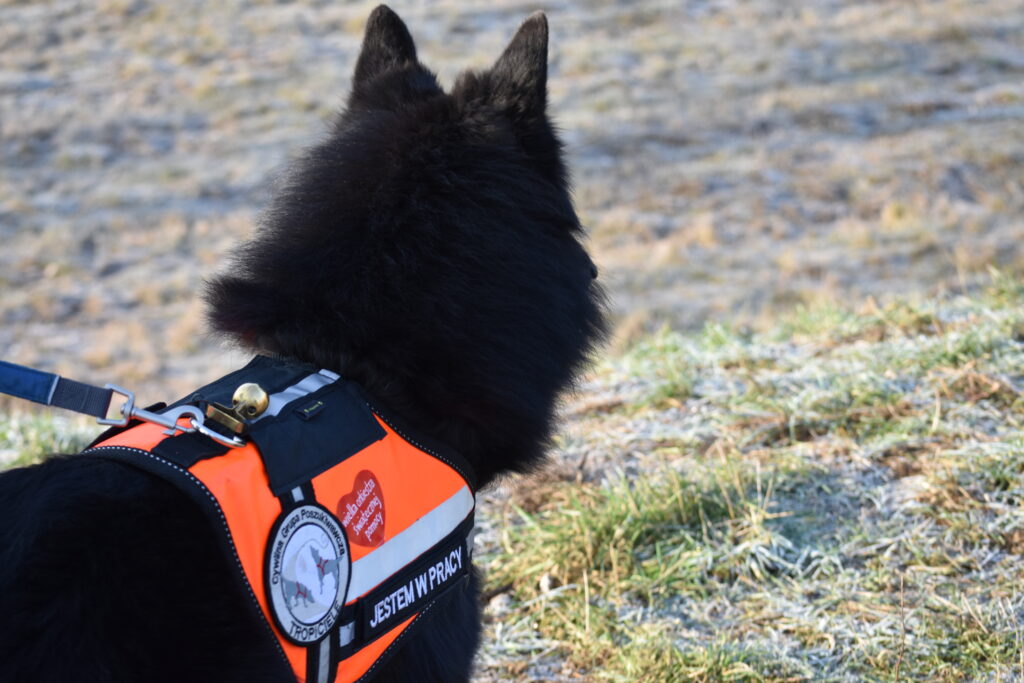 What qualities do I need to be a good handler?
Patience, diligence and perseverance. Further, you need to be driven and ambitious enough to stick it out. Humility is vital: ultimately, you’re working in a team to save lives. This is not about your own personal glory. 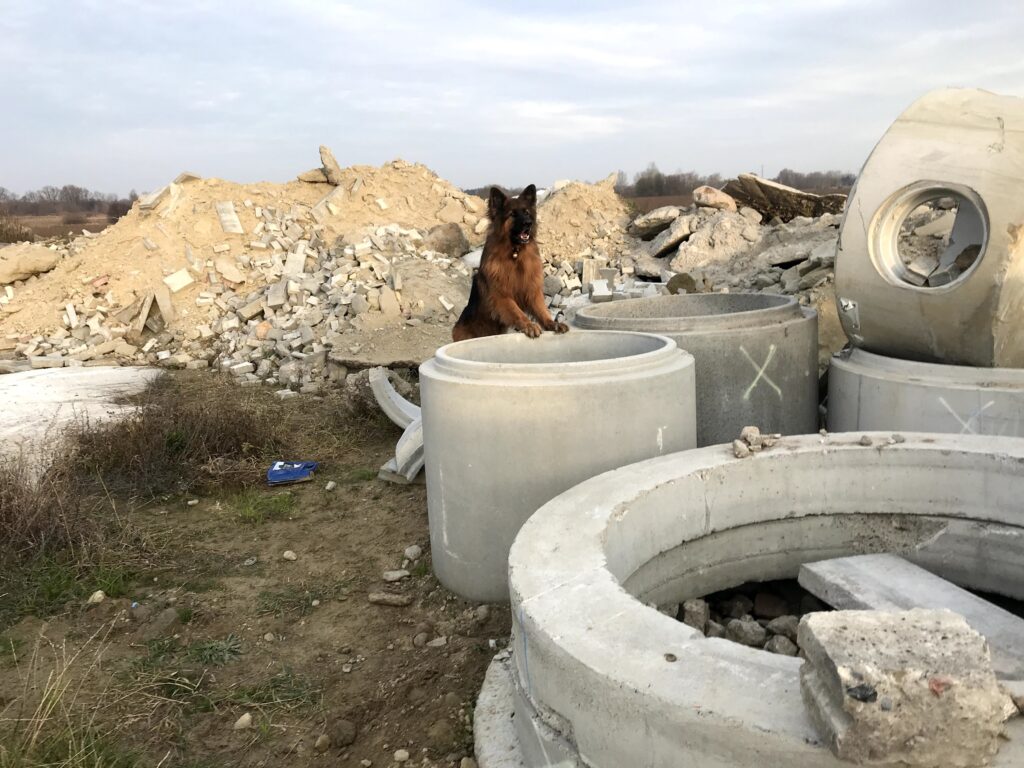 In general, who are you searching for?
Most of our dogs are trained in ‘area search’, which means they’re looking for people that have gone missing outside of urban areas (e.g., in fields, forests, etc.). Often, these are the elderly, children or people with various mental disorders or suicidal thoughts. You’d be amazed, also, how many people go missing while out picking mushrooms! 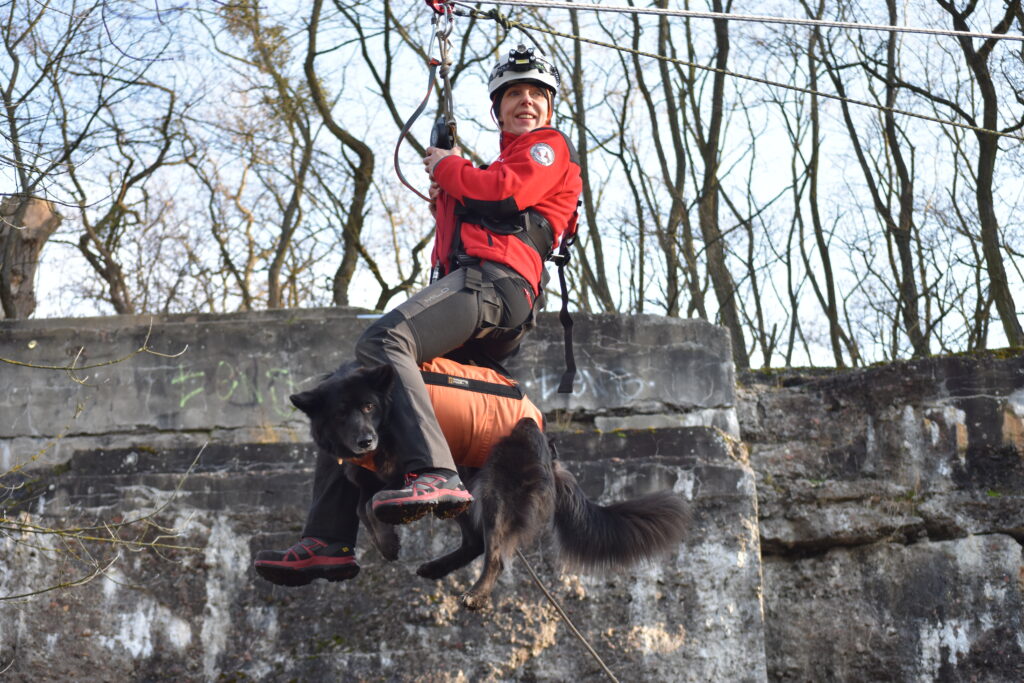 Some of our dogs are also training to search rubble, which means they will look for people in collapsed buildings. When a callout sounds, we’ll drop everything to attend it, no matter what the time is, or where the emergency is. Often, we’ll be working alongside or under the direction of emergency services such as the fire brigade or police force. 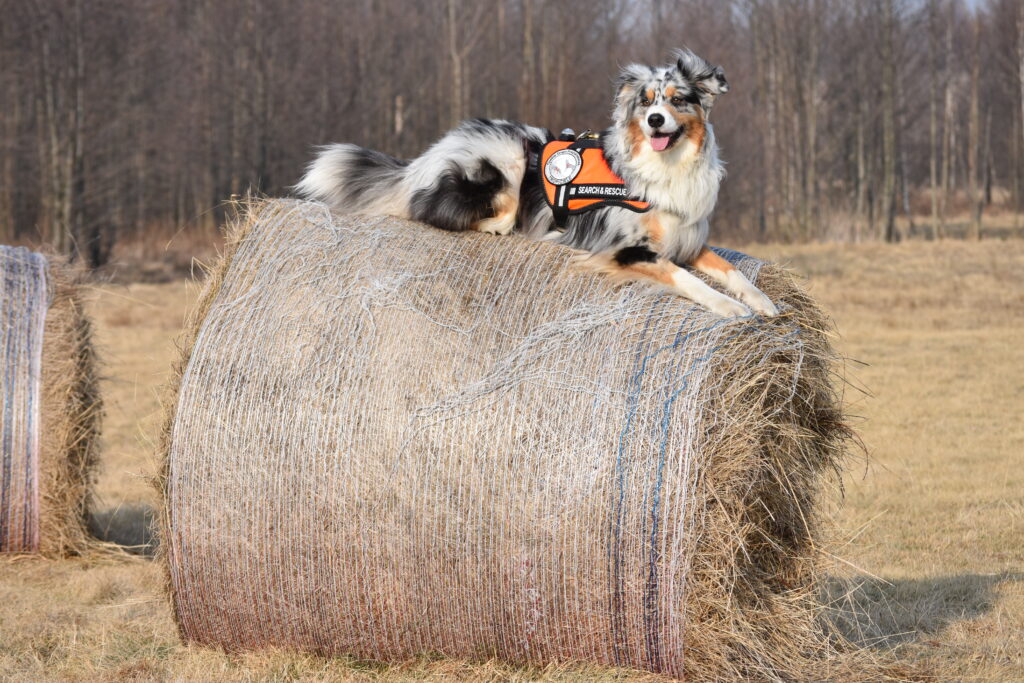 Hang on! To be clear, your dogs are released to roam freely while searching? They’re not walking on a leash?
That’s definitely a common misconception. Tracking dogs search for people on a leash based on a scent sample, but whilst such dogs can be very useful on SAR missions only police dogs qualify for such certification. As such, the majority of Polish SAR dogs rely on ‘air scents’ rather than tracks, which means they search for people without a lead. This is why it’s so vital that they know how to alert their handlers. 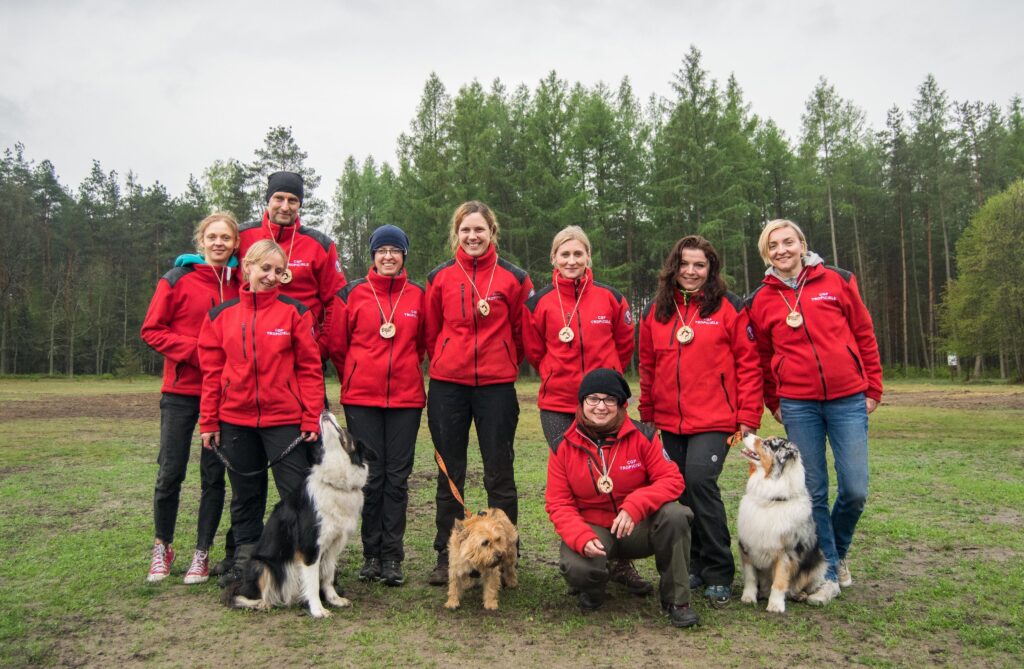 What kind of people and dogs are in the group?
Both come in all shapes and sizes! Our four-legged members include border collies, German and Australian shepherds, schnauzers, cairn terriers and various mixed breeds – some, even, were adopted from shelters. They work differently but all are equally enthusiastic – to them, work is the ultimate play time.

As for the people, we’re all unpaid volunteers. In our day-to-day lives we’re accountants, scientists, translators, graphic designers, corporate droids and several other things besides. What unites us is our passion for working with dogs and saving lives. 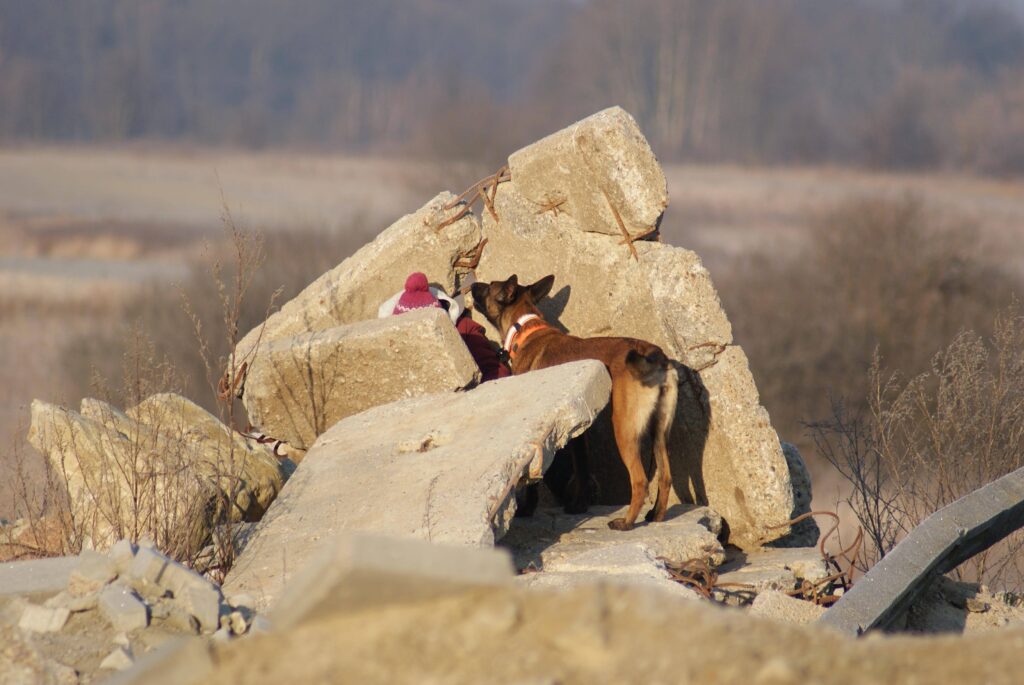