Using the town of Reszel as its base, the Insider heads north to experience the high and lows of Warmia and Mazury…
By Alex Webber | Photographs by Ed Wight

Although the air-conditioning is whacked to max, everyone in the car is shattered and spent. The landscape is parched and blistered and we’ve wilted in sympathy: no-one wants to say it, but there’s an unspoken feeling that embarking on a road trip in the midst of a heatwave hasn’t been clever. Even the car is sweating it – what should have been a three hour drive has turned into five.
As arduous as it might be, I know this journey is worthwhile. I’ve done it before. And soon enough, I know the others will agree. Our target, Reszel, is breathtaking, and as entrances go, this one’s pure magic: crossing a Gothic bridge that arcs over the River Sajna, we pass a neat row of townhouses before coming to a halt in front of the colossal bastion that looms over town. Balanced on a slab of rock, this 14th century fortress – originally intended for the Bishops of Warmia – has for the last couple of decades been serving as a hotel. Peering up at the hulk, we pause to allow the sensation to settle: for the next two nights this beast will be home. 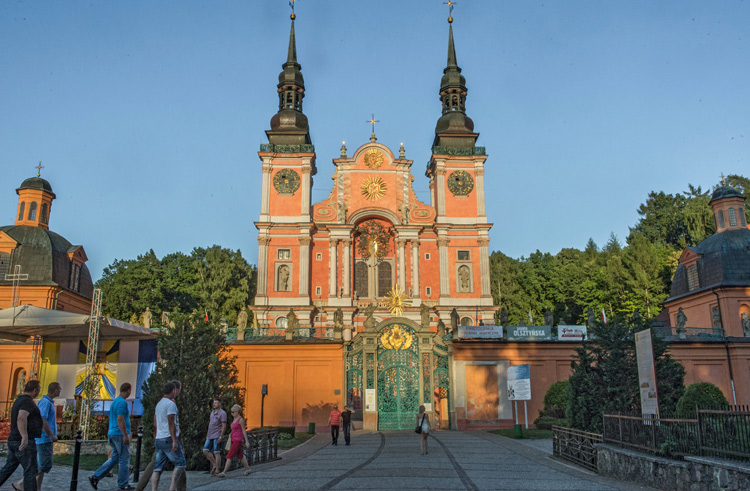 Handed clunky keys that could pass for instruments of the Inquisition, we drag our baggage over the courtyard cobbles before parting separate ways to locate our rooms. Being a castle, this isn’t as easy it sounds, and involves labyrinthine corridors and treacherous stairs. “Really,” my girlfriend asks, “I’m meant to climb up those?” For a moment, I wonder how many at-risk people – the frail, infirm and chronically hungover – might have slipped to their deaths. But the recompense is ample. Sure, the accommodation has something of a faded Ikea air, but that’s all offset by plenty of trimmings that leave you feeling like Rapunzel: gazing through a narrow slit-window over the valley below, we take stock of the view. I feel like I’m the King. 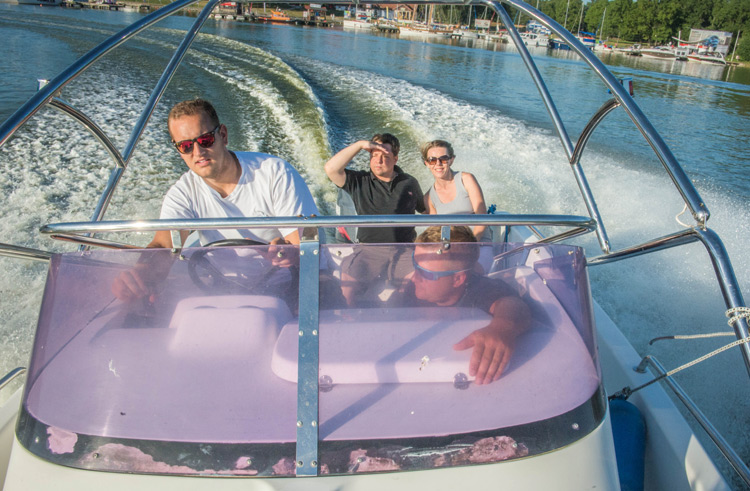 Back on ground level, my ego still rampant, we meet the others and set-off to explore. Grid-like in layout, the compact Old Town is quickly traversed. Largely rebuilt following a fire in 1806, it’s a pretty little place of red tiled roofs and ivy-clad walls. Winding downhill, we find ourselves emerging by the iconic bridge. Stood on tall, thin legs, its current guise is a throwback to its original mediaeval form. But don’t think it’s always been like this: the mouse hole cavern cut high into the brickwork is a reminder of the years in between when the structure was peppered with tiny cells housing prisoners and the poor. Following the curl of the river we are led into Park Miejski, a deep ravine interspersed with bouncy footbridges and zig-zagging stairwells that fade into the dusk. With the last streams of sunlight angling through the trees, we finish the walk soaked in the swampy green glow of the dense forest roof. 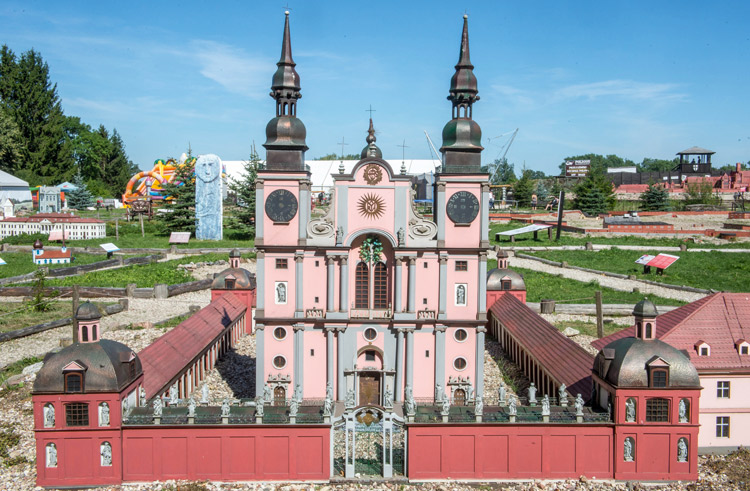 Picturing a mediaeval banquet we return to the hotel prepared for a feast. But Reszel disappoints. Instead of a whole-roasted hog with an apple in its mouth we instead poke our way through half-heated dogfood and a hideous fish with gleaming yellow eyes. I think of Chernobyl. Yet not all is lost. If not for the food, people boomerang back to this castle for the atmosphere. Over drinks the barman regales us with whispered stories about the zamek’s ghoulish past: turns out, the bar is above the dungeon, and it is there that a local girl called Barbara was held in captivity accused of witchcraft and arson. Eventually torched to death in 1811, her execution was the last of its kind in Europe, and it’s said her unforgiving specter still roams about. On a nearby wall, scribbled signatures proudly attest to the visit of the Ghosthunters Hunters International TV crew. It proves a long session, but our delayed departure is repaid by our own private light show – exiting, we find the sky dappled with Perseids and meteor trails; the shower of fire and light is stunning in its scope, a cosmic cascade of tumbling stars and unearthly glimmers. Within minutes I’ve gone from staggering to staggered.

After the celestial pageantry of the night before, the next day has a lot to live up to. Having already chalked off pretty much all Reszel offers, the plan is a series of excursions through which we’ll join the dots that comprise the region’s key attractions. First up, Sztynort, a lakeside village whose normal population of 170 swells with the onset of sailing season. Sure enough, as we approach the lake it’s heavily flecked with sleek white yachts glistening in the sun. With no boat, and no sailing license between us, we present ourselves at the ‘Kapitanat’ building and voice our demands: they being a boat and someone who knows what to do with it. “No probs,” comes the answer, “be here in 30 minutes.”

The break gives us a chance to walk around the derelict Steinort Palace nearby – once the property of the Lehndorff family, the estate was renowned for its collection of Arabic horses and ancient oaks, though is probably more famous for being appropriated by Ribbentrop, the German Foreign Affairs Minister, during the last years of the war. It’s said he arrived into town accompanied by carriages brimming with vintage wine and antique furniture snatched from the Jews and gentry of Warsaw. Now, work is underway to repurpose the building as a luxury hotel, with only a memorial boulder reminding visitors of the role the mansion’s rightful owner played in the plot to kill Hitler. 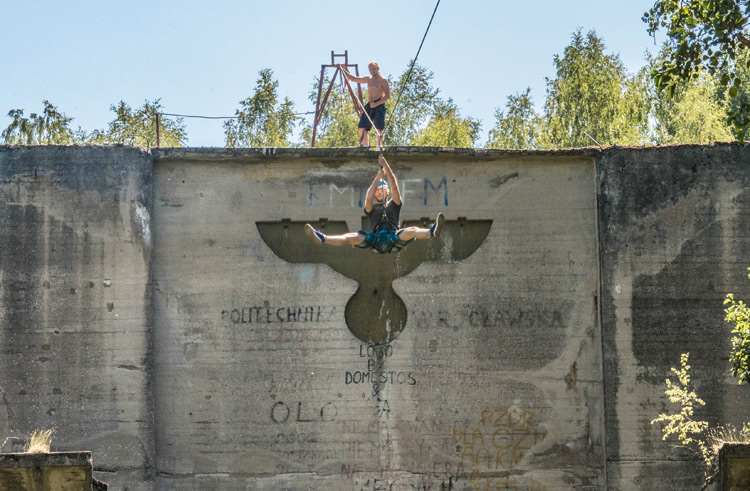 With the sightseeing done, we return to the Kapitanat ready for our nautical adventure. I’m expecting to be pressganged by a salty seadog with tales of giant squids and naval engagements, but instead we’re met by a muscly Tom Cruise with wraparound shades. Despite the broadest pirate accent I can muster, I can sense our Hollywood hero recognizes us as big city landlubbers, and for the first part of the journey we glide along calmly outpaced by ducks. Then, in the roar of an engine, it’s hold onto your hats as the boat zooms into life. For the next 30 minutes our trip turns into Mission Impossible with lots of high-octane thrills and preposterous turns. As the boat darts across the water, our skipper nimbly maneuvers us between more sedate vessels leaving a trail of spray in our wake. It’s exhilarating, and by the time we’re back on shore my heart is in my mouth.

And there it stays, for the escapades aren’t over. Next is a visit to Park Linowy Leśniewo, which I’ve fooled the photographer into thinking is a lion park. “You’re kidding,” he exclaims, “so in the middle of Mazuria you’ve got a pride of lions pacing around?” “That’s right,” I confirm, “and you need to be bloody careful – killed a whole family last year.” If only. What we’re about to experience is far more terrifying. Found in an abandoned canal lock, this seasonal line park has breathed life into an installation that once formed part of an ambitious but ultimately unrealized plan to link Mazuria with the Baltic Sea. First initiated in 1911, construction hit a peak between 1934 and 1940, and the creepy imprint of a giant Nazi eagle still decorates the concrete. Accessed via a wobbly rope bridge, the top of the lock is open for those with a serious head for heights. Its showpiece, though, is a zip-line that takes visitors hurtling over the murky water and into the woodland below. One, two, three – Geronimo! What follows is ten seconds of adrenaline rush, then five seconds of thinking you’re going slam into the ground and never walk again.

I’ m shaking for an hour afterwards, but the quirks of the Mazurian scenery serve-up plenty of distractions: a Dutch-style windmill (for sale, and yours for 2.5 million zeds), a pair of giant bees marking the entrance to the town of Solanka and, as we approach Reszel, the salmon pink splendor of the Święta Lipka church – it’s a feast of Baroque flash and dazzle.
Pulling in pilgrims since the 13th century, the church was borne from one of Poland’s best loved legends: so the story goes, on the eve of his execution, a convict held in Kętrzyn Castle was visited by the Virgin Mary who presented the vagabond with a chunk of linden to carve an effigy of her. The result was so beautiful that the judges interpreted it as a sign from the heavens and freed him – making his way home, the grateful ex-con spotted a linden tree and there hung his carving. Miracles have been occurring ever since, with worshippers first flocking to a modest wooden church built on the site, and later to the intricate complex that you see today. Ourselves, we experience our own miracle back in Reszel. Smarting from yesterday’s dining disaster, we instead choose to convene in Feniks Pizzeria, a place remarkable for its edible food, eccentric design and warm welcome – before we know it the four of us have been joined by a local footballer and his wisecracking dad.  Conversation flows, and so too the drinks. Such is the merriment, at one stage the photographer toasts the footballer for being ‘the funniest man in Poland’.
Morning, and checkout does not mean an end. We make the short drive to Wolf’s Lair, where we clamber over the jagged, smashed remains of Hitler’s Eastern HQ. Moss-clad, and with trees shooting from them, the remnants of these tomb-like bunkers pay epic testament to the regime’s utter madness. But we end on a high note: escaping the gloom we finish our tour at Mazurolandia down the road. Featuring a couple of goats, inflatable castles and the opportunity to fight your friends with wooden swords, it’s a bizarre theme park that feels fragmented, disorganized and a little bit random. But what fun! And there’s the miniature park, an area showcasing the region’s highlights in their shrunken form. Gosh, I think, there’s still so much to see. Next time, I promise, safe in the knowledge that time will soon come.