architecture80 churches2 wilanow39
Fiercely detested by architecture buffs, could Wilanów’s landmark temple yet become one of Poland’s defining icons? BY STUART DOWELL Most of the opinions about...

Fiercely detested by architecture buffs, could Wilanów’s landmark temple yet become one of Poland’s defining icons? BY STUART DOWELL

Most of the opinions about the Temple of Divine Providence in Wilanów, which opened officially on November 11th last year, are negative: it’s a huge lemon squeezer; Poland’s first spaceship; a missile silo; or it looks like something from Kazakhstan. It even won the Makabryla anti-prize for the worst building of 2016. The project has also been heavily criticized for its cost, which has ballooned to an estimated 220 million złotys, a large chunk of which came from the taxpayer… and it’s not even finished.

If so many people think the same, they must be right, surely? Perhaps not. In fact there are reasons why the temple could even be hailed as wonder of sacral architecture and why it may even become an icon of Warsaw in the future.

The first fascinating thing about the temple is the contrast between its ultra-modern design and its roots that go back over 220 years to the signing of the May 3rd Constitution in 1791, when the Great Sejm voted to build a temple offering thanks to God’s providence for granting citizens’ rights that were enshrined in the short-lived constitution.

The temple was originally to be built where Warsaw University has its botanical garden next to Łazienki Park. Work started, remnants of which can still be seen, but the partitioning of Poland halted progress and the plans resurfaced only when Poland regained its independence in 1918. This time, a design that took its inspiration from French Gothic cathedrals and American skyscrapers was to be erected on Pole Mokotowskie. The Second World War and the years of socialism meant that the Church had to wait until 1989 to dust off plans for its thanksgiving project. 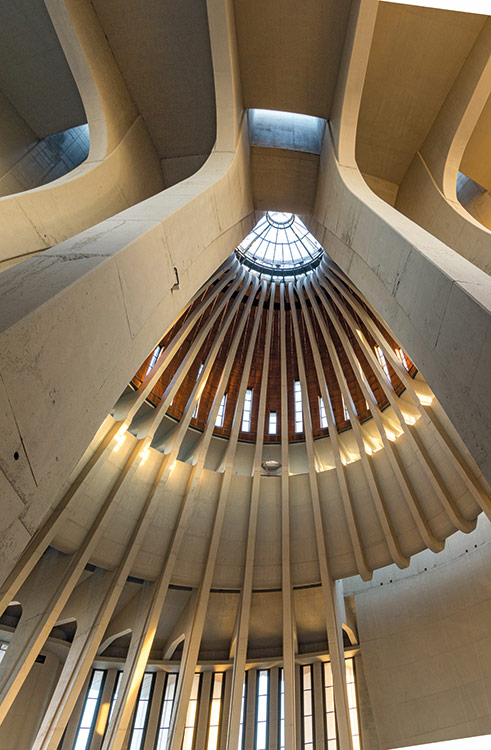 Of all the jibes, it is the lemon squeezer one that seems to have stuck. Yet, domes have been part of architecture since early Mesopotamia and part of Christian sacral architecture since the very start of church building. It seems unfair to ridicule the temple for having one. The slim, shapely, copper dome is interesting because of its open top.

What does it symbolize? A direct connection between the heavens and the mortals below? Or does its Baroque-style broken nature suggest human imperfection and God’s forgiveness? Thirty tonnes of copper were used to cover the dome, donated by Poland’s richest company KGHM, and the material comes with a 700-year life-span. The current earthy bronze color will change slowly to become a rich, mossy green.

The church also pleases the eye, maintaining the classical proportional division into three horizontal levels so beloved by the Greeks and Romans. The blocky squareness of the corpus symbolises Earth, while the dome represents perfection, eternity and the heavens – a concept that goes back to Ancient Persia. The whole structure rests safely on the solid foundation of the Pantheon of Deserved Poles, who breathe their collective wisdom to the worshipers above. 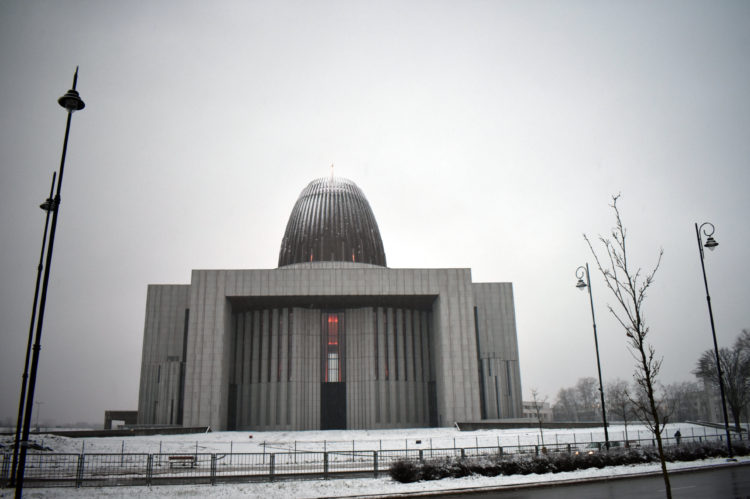 Approaching the temple, we are confronted by its monumental cube construction; however, the impression upon entering is totally different. We’re in a massive circular nave, a huge airy, open space that extends right up to the opening at the top. It feels like the dome visible from the outside is actually the whole church.

The sense of levitation and lightness is enhanced by a 25-meter high alter piece that curves in a gentle ‘s’ shape and a huge cross with the figure of Jesus that floats above the chancel. A quarter of a hectare of American marble covers the floor, underneath which are 19 km of heating pipes, keeping worshipers nice and toasty in the winter.

The circular nave creates a wonderful sense of harmony and inclusion. The 26 pillars form a kind of upturned chalice and mark out the central nave from the side naves. The pillars are kept apart at the top by an oculus that allows a shaft of light to bore down. Placed on top is a 4-meter cross, making the whole church achieve a height of 75 meters. It’s a great feeling to be able to walk around the whole church yet still feel connected to the center. Light, or God’s providence if you are a believer, enters the church through slim, tall windows, but when its dark outside an illumination system lights up the interior in an uplifting display of colors.

The temple is situated in the award-winning Miasteczko Wilanów residential complex. Walking around the new apartment buildings, the characteristic dome delights when it falls into view through surprising lines of sight. The best view, though, is to be had turning onto the start of Al. Rzeczypospolitej – it must be one of Warsaw’s best vistas. The modernist design of the church is a perfect match for the neighborhood’s new architecture, making an ideal pairing of secular and sacral.

The snaking pillars, curving alter piece, circular nave and open dome all create a sense of timeless mysticism that anyone can feel, Christian or otherwise. Sitting under the dome and contemplating the unknown may give rise to feelings that early Christian worshipers had when they entered the eternal Hagia Sophia in Istanbul – the ultimate domed temple.

Although the church hasn’t won many friends so far, future generations may look on it differently. When bitterness about its cost has faded and nostalgia rubs up against new interpretations of architecture, the temple may finally bathe in the warm glow of appreciation.