Unfazed by Russia’s ban on Polish apples, the people of Warsaw are fighting back, ormore pertinently, biting back.

A tangled history of oppression and injustice has left its mark on the Polish psyche. Having suffered the spikier end of tyranny and torment Poles have, over the centuries, developed an indomitable inner spirit that refuses to be cowed. So news that Russia, in what some have called a callow fit of pique, has banned the import of Polish apples has been met with defiance. Resistance has replaced bewilderment; battle lines have been formed. But these are not the sort of battle lines you’re familiar with. They’re lines to the local grocer. Galvanized by the #jedzjablka campaign unwittingly unleashed by journalist Grzegorz Nawacki, Poles have been clamoring to show their patriotism by chomping into as many apples as they can.

In Warsaw, restaurants and bars have picked up on the public mood, rushing to place apples prominently in their offer. Few have shown more appetite for the fight than Restauracja 99, who’ve responded to apple-gate by releasing a separate, apple-specific menu. Others, too, have joined the crusade: in Solec 44 apples now appear with frequent regularity on the menu, Delikatesy Esencja have a best-selling apple soup, Słoik have adopted a slew of apple-based dishes, while Plan B have done their bit by selling freshly-pressed apple juice outside their door. In the pubs, domestic cider sales have soared. But this is just the beginning. With Polish apple-growing season reaching its peak in September, visitors can expect to be seeing a lot more of the fruit on menus and tables. 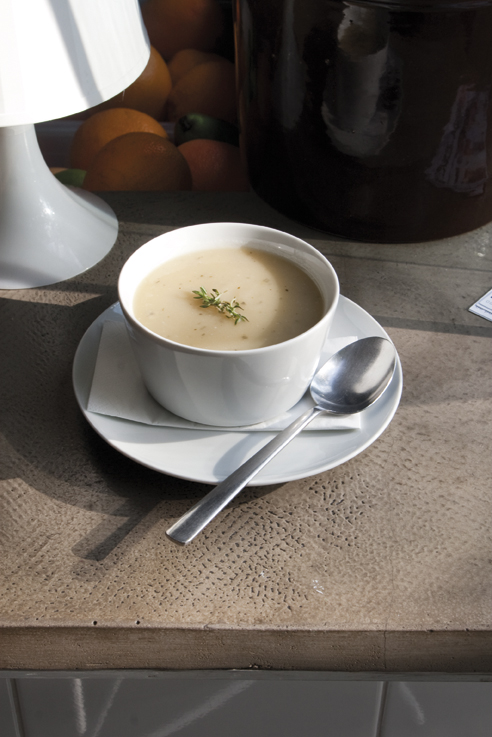 Cream of apples with thyme

Depending on the apples you choose, cream of apples will be sweet or sweet and sour. It is best seasoned with herbs and feta. Milk can be substituted with water.

Peel and cut the apples in chunks, then lightly sauté with butter in the same pot you are going to use to cook the soup. Add water up to 1/3 of the depth of the pot. Cover the pot and simmer until the apples fall apart. Add milk and keep heating until it is warmed through, but do not boil. Blend and season with salt and pepper. If the soup is too thick add milk (or water). Dress with thyme and feta.