This March marks the 70th anniversary of one of the most celebrated prison breaks ever: The Great Escape. The Insider heads to the forests of Żagań to learn the story.

Of all of the crafty plans formulated by the Nazis, perhaps one stands out for its gross stupidity. Discounting their ill-advised lunge at the Soviet Union, few schemes had more flaws than the decision to house the most persistent Allied POW escapees together in one super-max complex. Did the Nazis really expect that lot to behave? Apparently so.

Constructed in 1942, Stalag Luft III saw one of the most infamous prison breaks of all time, one that would be later immortalized in the film The Great Escape. The story has been told and retold numerous times, and as such much misinformation swirls overhead. Coated in thick Hollywood schlock, the reality was there were no plane heists and nor were there motorbike chases. And pictorial evidence suggests no-one looked much like Steve McQueen – in fact, any American involvement was limited to a bit of early digging: by the time the plan was in full swing American prisoners had been transferred to a different compound. But the escape did happen, and to most people’s surprise, it happened here in Poland – at least, what is modern day Poland.

Of all the misconceptions perhaps the most common concerns the camp’s location. To this day myth persists the camp was/is situated deep in the dark forests of Bavaria. In actuality, it was in the town of Sagan which, following the post-war carve-up of Europe, was renamed Żagań and awarded to Poland. Set 500 kilometers west of Warsaw, reaching it is no easy task. A place of puddles and potholes and shuttered shop fronts, Żagań is typical of backwater Poland – as such, it’s not long before we’re hopelessly lost: “it’s starting to feel like the great mistake,” groans the driver. 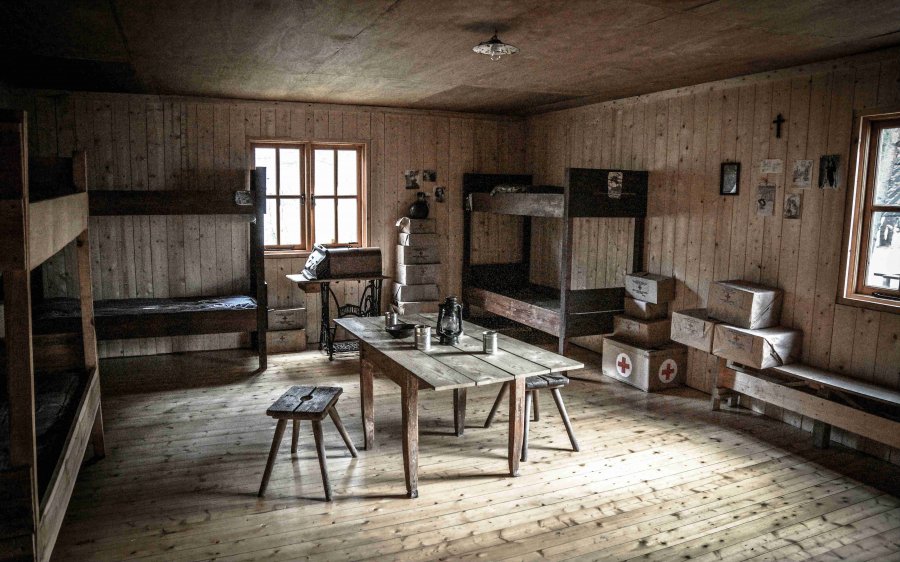 But our persistence is eventually rewarded as the car chunters up a track and stops outside the gates. As something of a history buff, I’ve traveled to numerous camps in Poland, and as a rule they’re all somber, silent places of mournful contemplation. That is not the case with Stalag Luft III. On the other side of the gates, seaside-style cutouts allow visitors to stick their heads through a Great Escape poster, while meters away, a rowdy group of children are engaged in a BBQ. Teachers struggle to retain control of the rabble as sword fights featuring red hot pokers break out sporadically.

Ahead of us stands a recreation of Hut 104, the barrack from which Squadron Leader Roger Bushell planned the escape. Rebuilt not long back thanks to the combined efforts of RAF personnel and local volunteers, its door slams with a thud. We shuffle over squeaking floorboards into a room designed to mimic the living conditions faced by the prisoners. The dormitory is spartan but livable – there are pictures of sweethearts back home, food parcels and suitcases. In truth, it reminds me of my former boarding school. Only a sign pinned to the wall suggests it is not: “Escape from prison camps is no longer a sport,” it declares, before issuing dire ‘shoot on sight’ warnings.

The Allied officers interred here were not serving hard time, certainly not in the way the Soviet and Polish prisoners were in nearby camps. On the contrary, the Allied airmen here busied themselves with cabaret and theater performances, football matches, swims in the reservoir, and even model boat competitions. Coward that I am, I ponder that I’d have waited the war out with a nice cup of tea and a few games of darts. But that’s why I’m not a war hero. Bushell & Co. were cut from a different cloth, and slouching about while their countrymen died was not an option. 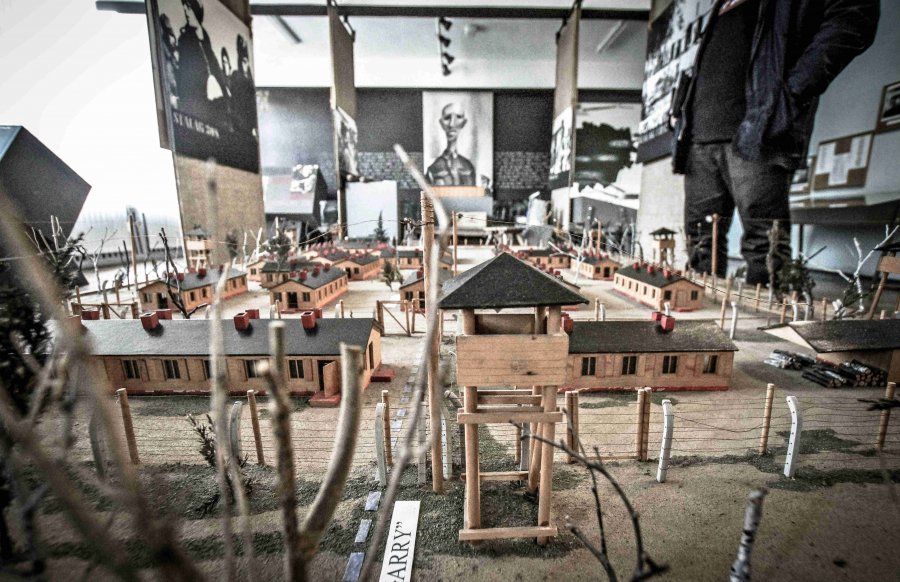 Bushell had already been involved in two escape capers, and his accomplices shared a similar pedigree. Their plan, to bust out a multi-national assembly of 250 airmen, was the boldest project to date – in simplified terms, it went something along the lines of, “we’ll build three tunnels, one of them is bound to work.” Taken as a whole, construction of them made ingenious use of 4,000 bed boards, 3,424 towels, 2,000 knives and forks and 1,400 cans of milk. As a feat of engineering it really was something. Pleasingly though, Hut 104 is not, unlike the film, just designed to appeal to jingoistic Brits. This was an international escape, and other nationalities are remembered in a series of draughty rooms – the French and Czech connection are prominent. Other escape bids that took place here are also noted, not least the legendary ‘Wooden Horse Escape’. Also later made into a film, this breakout utilized a wooden exercise horse to cover up a tunnel constructed right under the noses of the guards.

The museum’s masterstroke lies, however, in making history come alive. Sensitive in the right parts, in others it actively engages visitors: kids scale guard towers, shimmy under barbed wire and strike movie poses. Never do such larks feel disrespectful; the museum, you sense, encourages positive energy. The highlight though is the tunnel, a 30 meter shaft that allows visitors to squeeze on a trolley and then pant their way to freedom. Although three times shorter, and seven meters higher than the original tunnels, it’s a severely claustrophobic experience – you sweat, you swear, you feel moments of panic. Exiting, in the bright light of day, there is a new appreciation of the daredevil bravery of those who were involved.

A grim piece of concrete houses another museum, its chilly hall filled with relics recovered from the site: forged ID cards, currency, crockery and chess sets. While many of the displays are glassed off, other are simply left lying out in a big rusting heap – shovels, rifles and assorted metallic hardware. If you’re used to Warsaw’s new generation of museums, welcome to how they used to look: cold, confusing and completely compelling.

But the journey is not over. Under the guidance of a brilliant young staff member, we set off into the surrounding woodland. Amid the tangled undergrowth, original camp foundations survive, not least those of the notorious punishment block: the cooler. And in the ground, a 111 meter stretch of paving marks out where ‘Tunnel Harry’ ran, its stonework inscribed with the names and nationalities of the 76 men who made it out before the escape was thwarted. Of that number 73 were caught, with only two Norwegians and a Dutchman making it safety. Fifty of the escapees were shot, and many – including Roger Bushell – are now buried at the Commonwealth Cemetery in Poznań. Nowadays, the anniversary of The Great Escape is marked in Żagań on March 24th by way of a multi-national ceremony attended by a dwindling band of veterans. Words do not do not convey their courage. 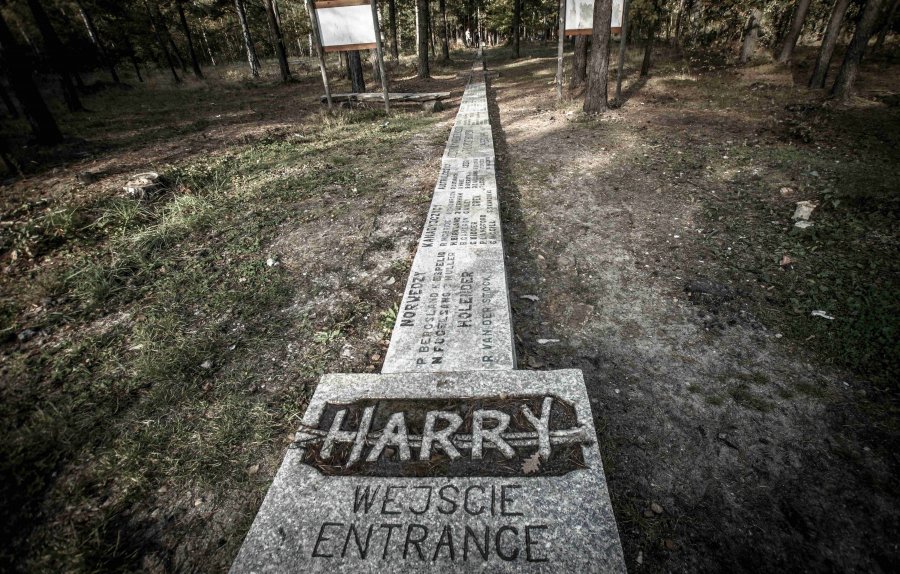