Going back around ten years ago, I started doing a bit of work on-and-off in Bydgoszcz. A pretty town I thought, but also pretty boring. In those days I’d stay in a sullen hotel on the edge of old town, a place where gargoyle-faced receptionists would emerge silently from the darkness before admonishing guests for perceived infractions – returning after 9 p.m., I soon found, was gravely immoral. Not that there was much to do after that time: dining options didn’t extend far beyond the kebab with cabbage choices at the ubiquitous Sphinx, while drinking was done on my own in some dimmed, cobwebbed corner.

One evening, crossing the decomposing Mill Island, some bloke appeared from the bushes and chased me with a stick. That was the most exciting night I ever had there. When the Focus Mall opened in 2008, it signaled a foodie revolution: no more Sphinx, instead I’d hunker in the food court eating from Burger King. So all things considered, when my work in Bydgoszcz finally finished I saw it as a blessing and never thought of it again. At least, not up until a few weeks ago… 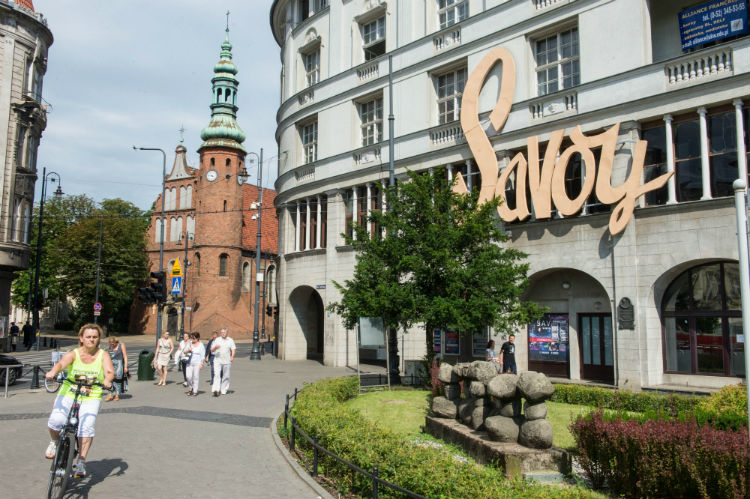 I was sat in bed, reading a biography of J.D. Salinger, when, lo and behold, Bydgoszcz reared its head. Turns out that years before he wrote Catcher in the Rye, the author was sent there by his family in order “to learn the mysteries of the ham trade”. In a rare recollection of his time in Poland, J.D. wrote that his slaughter-master / mentor would fire a shotgun at “sparrows, light bulbs and fellow employees”.

Intrigued, I hit Google, only to learn that the very shopping center I once used to seek sustenance in was the site of the slaughterhouse in which Salinger worked: “A committee of local boosters,” writes Thomas Beller in The Escape Artist, “had initially planned for a whole statue of Salinger – to be located in a field of rye, no less – but they ran out of money. So now there is a plaque that was paid for by the owner of the mall.” Clearly, this was a city that deserved a second chance. 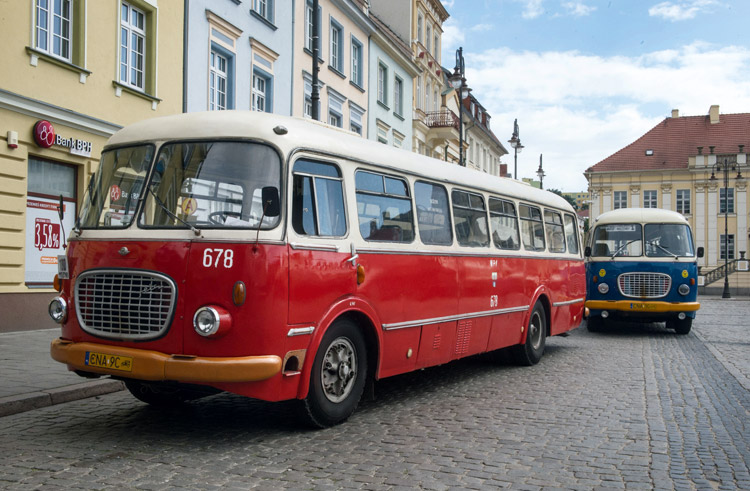 On arrival, it’s immediately clear that the city has matured for the better. Where once I used to lodge in the Hotel Bastardo, nowadays Bydgoszcz can count the five-star Hotel Bohema and the highly acclaimed Słoneczny Młyn on its books. There’s also a new Mercure which – on account of an advanced booking price of zł. 175 – has been elected to serve as our digs for the night: shelve any suspicions you may have of big chain brands, for this is a hotel that ticks all the boxes – stylish, spotless and a location you can’t argue with.

From our base it takes minutes to reach Mill Island, a place I remember as being murderous at night. Not anymore it isn’t. The EU has been kind to Bydgoszcz, and one of the principal beneficiaries has been this little haven. Now fully renovated, it’s awash with pristine parks, art installations and tinkling water features; cross-timbered mill houses, once abandoned and empty, have been resurrected as museums and galleries. 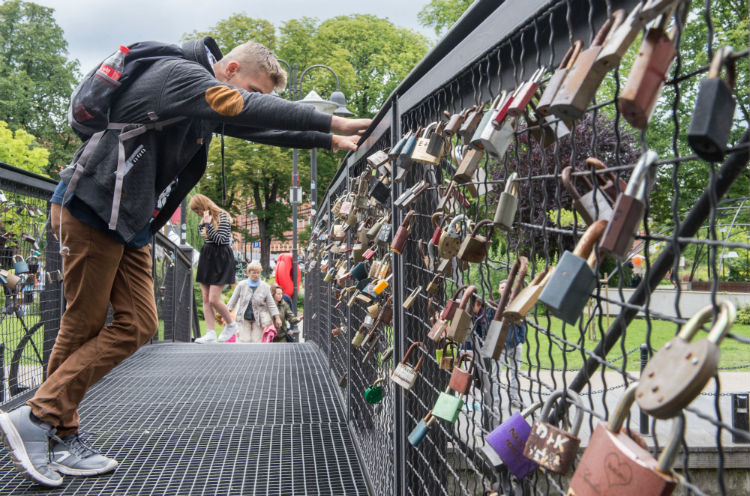 Where once I saw resignation, today I see only regeneration… and a ‘magic’ seat: as we make our way from the islet we notice an outsized chair in a busy playground which, according to an info board, played a starring role in some famous Polish kids film. Made from ‘magic wood’, it grants a wish to whoever sits on it. Sensing my opportunity to become a millionaire, I make my wish then hurry away before I’m mistaken for a weirdo. 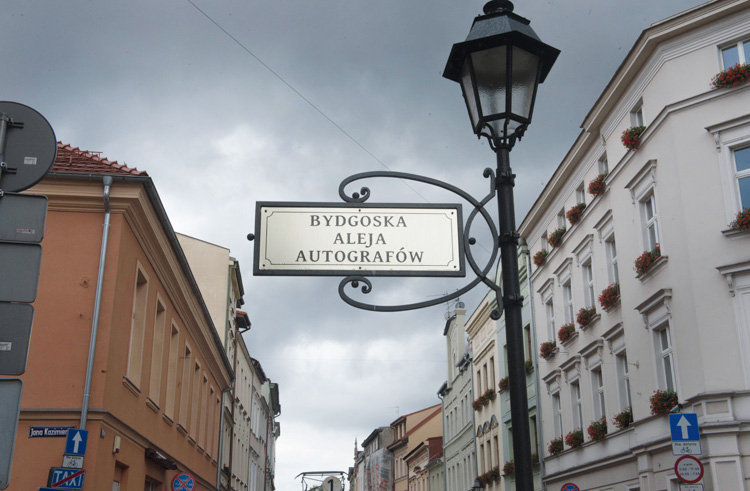 The heavens open just as we reach Old Town and we seek shelter inside The Museum of Soap and the History of Dirt. We’ve missed the English-language tour but are content to browse around unmolested by the staff. Not so fast: a zany dude in a lab coat pops out from behind a curtain and insists on taking us around. My heart sinks: we’re on a tight schedule and don’t want needless distractions. But, before I can form an excuse, he’s off with his spiel. And I’m so glad for that. What transpires is one of the most entertaining museum experiences of my life: at one stage I’m sat in an old medieval bathtub while our guide, Waldemar, whips me with some flail-like implement. “He usually pays for that,” wisecracks the photographer to an alarmed American. 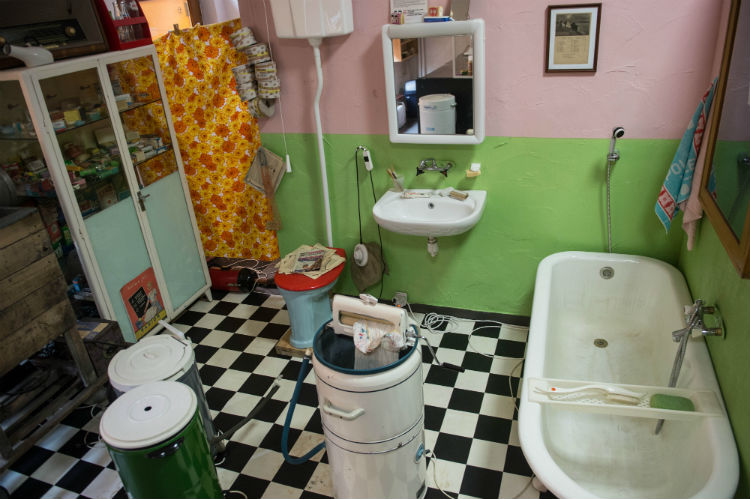 Full of verve, wit and banter, our whistle stop circuit of the museum is filled with nuggets of wisdom and historical insight. As I don a Soviet-produced hairdryer/cap (“it wasn’t uncommon for people to get electrocuted using those,” warns our guide), the irrepressible Waldemar recounts how locals would often give their milk an extra lift by adding some washing powder to it. Anecdotes about European toilet habits follow, not to mention a crash course in soap making. Not just informative, it’s rollicking good fun. 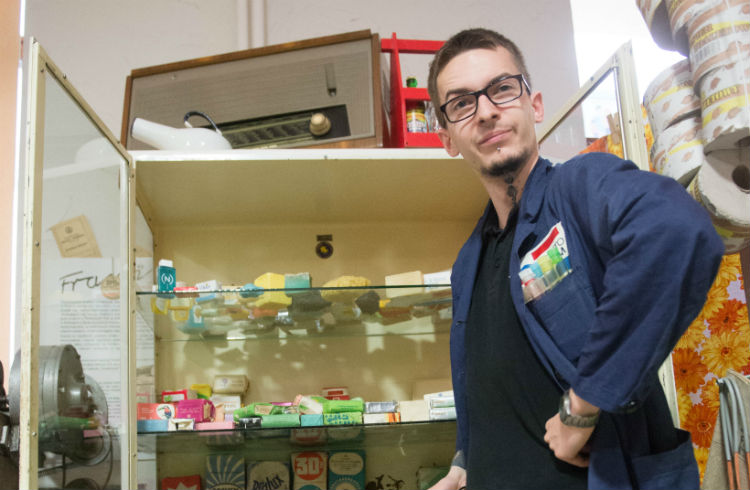 Back outside, the weather has cleared and we continue our lap of Old Town. With the cobbles still glistening from the summer rain, I’m reminded what a handsome little thing Bydgoszcz actually is. Art nouveau tenements line the streets, the neat architecture occasionally interrupted by splendid bursts of Gothic strangeness. Most of all though, it is the rivers that leave an impression. 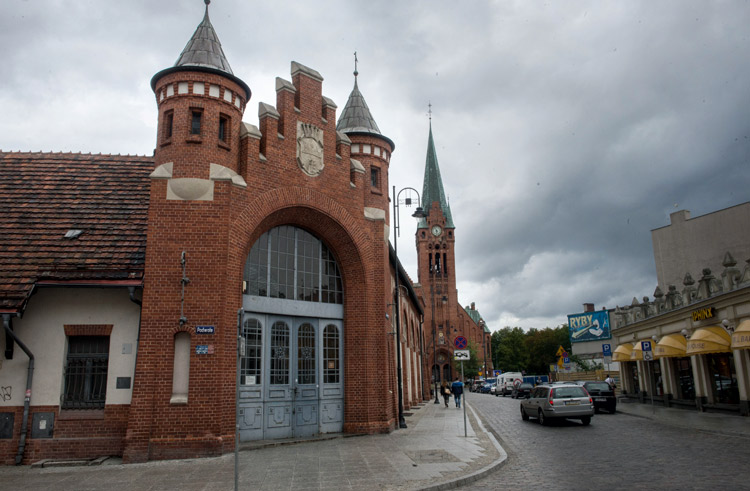 With the Wisła and Brda scissoring through it, the city is known as the Venice of Poland. The comparison is optimistic, but nevertheless there’s something enchanting about the canals and waterways, barges and bridges. Of the latter, it is Most Jerzego Sulimy-Kamińskiego that is the most famous. From it, one sees the iconic symbol of Bydgoszcz, a sculpture depicting a man on a tightrope crossing the river.

Having acquired a heap of pamphlets from a Tourist Information point housed inside a tram, I’m pleased that one of the aforementioned brochures suggests visiting a pub. Maintaining Bydgoszcz’s age old fixation with beer, the Warzelnia Piwa brewery promises ‘a fascinating journey through time’. We’re there in eight seconds. With views over a meandering river, we settle down on a multi-leveled terrace and prepare to be wowed. Naturally, the food (Polish and… Indian) gets a withering assessment and the beer doesn’t fare better. Fortunately for us, the town has joined Poland’s piwo-lution and it isn’t too long till we sniff out a proper craft beer pub. 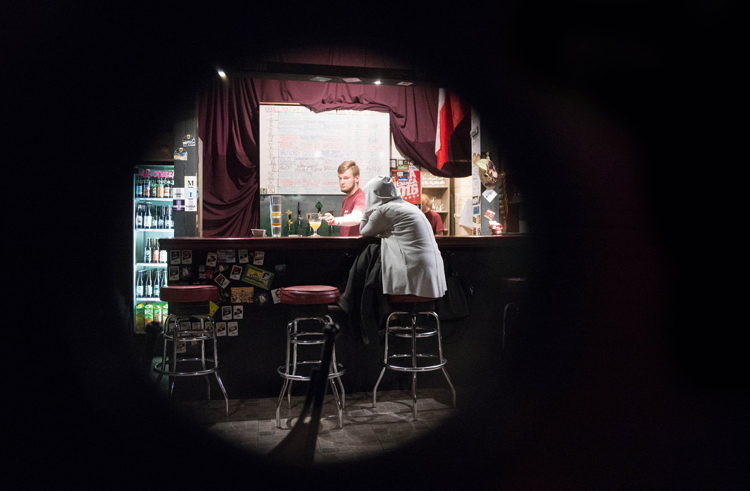 Prolog 9 is as far removed as you can get from Warsaw’s tap bars. Resounding to an ominous soundtrack, and cloaked in a veil of shadow, we manage to decipher some of the scrawls on Prolog’s walls: ‘Troops of Doom’, ‘Ass Cult’, and ‘Harmony of Fear’. Gulp. A crazy night is had, and when we reach the hotel it’s in a state of high spirits. Taking a nightcap on the rooftop terrace, we stare out across to the illuminated opera house opposite. “Designed in the 60s,” imparts one of my leaflets, “the opera was only completed in 2006.” What a wonderful city I think to myself.

The next day is a biggie. Having had a chance to study my touristic bumph, I’ve realized there’s so much more to unearth: a dinosaur park with an upside down house, a piece of public art named Andrew’s Pants (a pair of ripped trousers that commemorate artist Andrzej Nowacki), not to mention a statue honoring Marian Rajewski: a locally-born mathematician that helped break the Engima code. But I can forget all of those: outvoted by my peers, we hire a car and set off to the sticks.

First, the Exploseum, a secret WWII munitions factory in the forests outside Bydgoszcz. Over 30% of the ammo fired on the Eastern Front was produced here, and we tour the grounds in stunned deliberation. Covering a vast area, the tunnels and bunkers take hours to explore. The accompanying exhibits document not just the story of the factory, but also the advancements made in weapons technology. 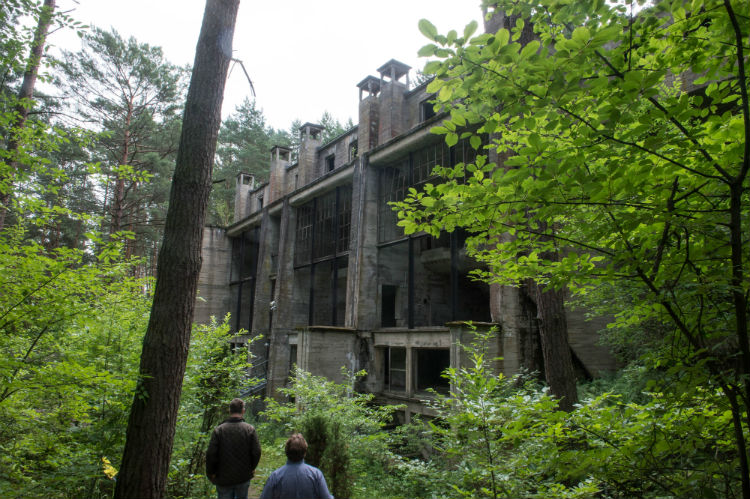 Biskupin, 50 minutes south west of Bydgoszcz, is next. Known as the Polish Pompeii (again, optimistically), it’s a full reconstruction of an Early Iron Age fort. While in charge of a school outing in 1933, teacher Walenty Szwacjer saw some wooden stakes sticking out of a lake. Suspecting they might be of archaeological value he reported his find to the local police. 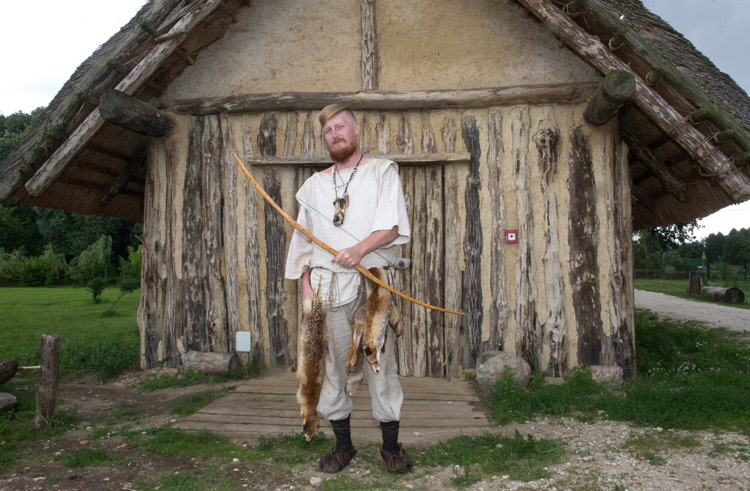 They ignored him, and it wasn’t until Szwacjer contacted the Wielkopolskie Museum that the importance of his discovery became apparent: this was one of the biggest prehistoric settlements ever to be found. A life-size replica of the site was built nearby and it’s been drawing thousands of visitors ever since. Dioramas and a string of actors with dead rabbits strung around their neck serve the purpose of demonstrating ‘this is how they lived’. 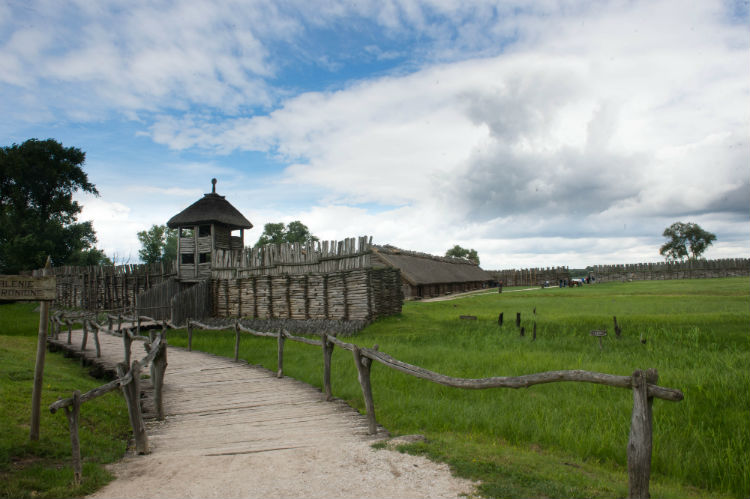 Having had a near fatal lunch in Biskupin, the journey back is conducted in grim, troubled quiet. But then, a shout: “Stop!” The photographer has spotted a billboard for a cowboy town named Silverado and the car veers around as we head in its direction. It’s almost as if the term ‘it’s so bad it’s good’ was coined for this place. A hilarious, unexpected pit stop, we roam between a Boot Hill graveyard, stables and Dr. Quinn’s cabin. 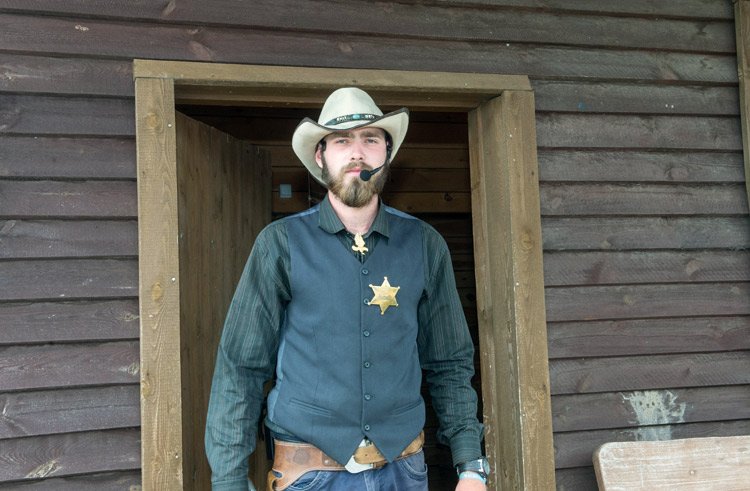 Having seen us chuckling at the lasso show, a badass sheriff shoots us a steely Eastwood stare before uttering the immortal line, “witam, chłopaki”. As we stride into a saloon filled with pensioners wearing ten gallon hats and waistcoats, we brace ourselves for the brawl that never happens. Unexpectedly, we end up having a roaring time, and such is Silverardo’s effect, we spend the rest of the day talking like John Wayne. In a way, it’s an indulgence we’ve deserved, for we have seen, survived and savored the Wild (North) West of Poland. You should as well. 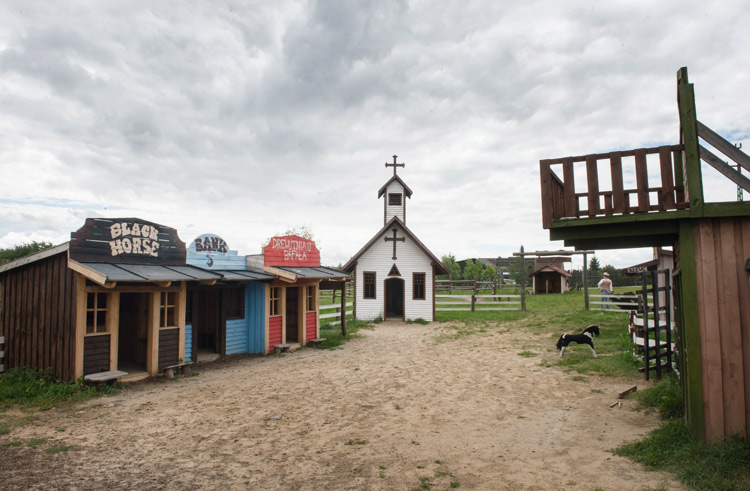 Getting There
By car, Bydgoszcz is approximately a 3-hour drive North West of Warsaw. Direct trains run regularly and take between 3 and 3.5 hours.