Bats, ghosts and a cobwebbed dungeon: my standard expectations of a castle hotel. Osowa Sień has none of these, and the closest I come to a fright is hearing a hideous howl that pierces the night. Murder? Actually, it’s just the photographer falling off his seat. Running outside to the scene of the commotion, I’m greeted by the sight of him being pulled to his feet by our host for the evening. Unbeknown to us at the time, this is but the first in a series of humiliations that we’ll together endure. All that, however, lies in the future. For now, it’s our first night here, a fairy tale property in the midst of a delicate rejuvenation of the outer façade. 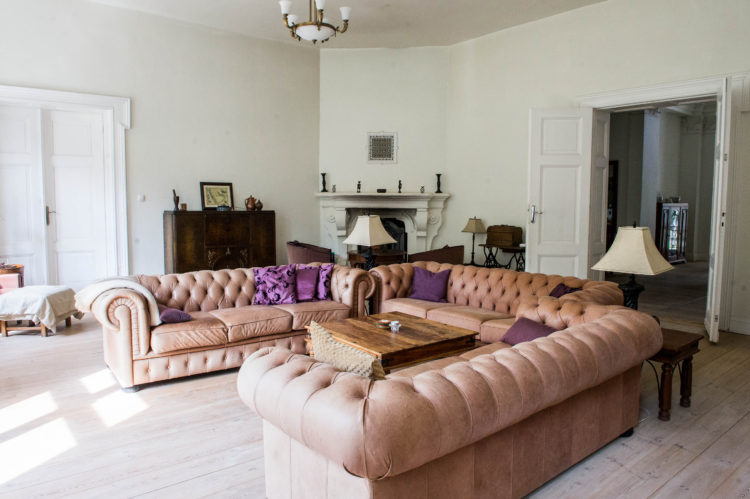 Set 20 kilometers due west of Leszno, the castle to which we’ve arrived took shape thanks to the concerted efforts of Anna and Eugen Von Seherr-Thoss. Having inherited the plot in the latter part of the 1800s, it was their vision that foresaw a magnificent home to replace the aging manor that had stood there before. Inspired by the great hunting castles of Germany’s past, what arose after many feats of engineering was a visual feast of turrets, towers and pointy little features.

Later passing to their nephew, Lothar Von Brandenstein, it was under his watch that Osowa Sień was utilized much to its intended purpose and served as a seat for uproarious parties throughout the roaring 20s. Life flourished. Galvanized by local intrigues, not to mention the prevailing mood of the castle, his wife, Ruth, would retreat to the central tower to type down her thoughts. Published though Ruth was, it was their daughter, Jolanthe, that would really break big. Writing under the pseudonym of Leonie Ossowski, her acclaimed post-war books reflecting on her youth at Osowa Sień have since earned the author cult recognition.

With Germany’s borders shifted in the wake of WWII, the castle fell into the clasp of the communist authorities. Change was inevitable and none of it for the better. Stripped of many of its original glories, Osowa Sień found itself a victim of the iconoclasm of the time. Grander architectural elements were removed and other bits torn down. The golden years, so it seemed, had been consigned to the past.

Fast forward to the 21st century. Bought as a passion project by a Dane, a gradual program of renovation was put into place. This received a further boost when new stewards entered the frame; more recently acquired by Matt and Jamie Chojnacki, a vivacious Canadian couple of, respectively, Polish and Greek descent, together the present castellans have ambitiously set about the ongoing process of reviving this jewel. Already, you get the impression of a job going well. 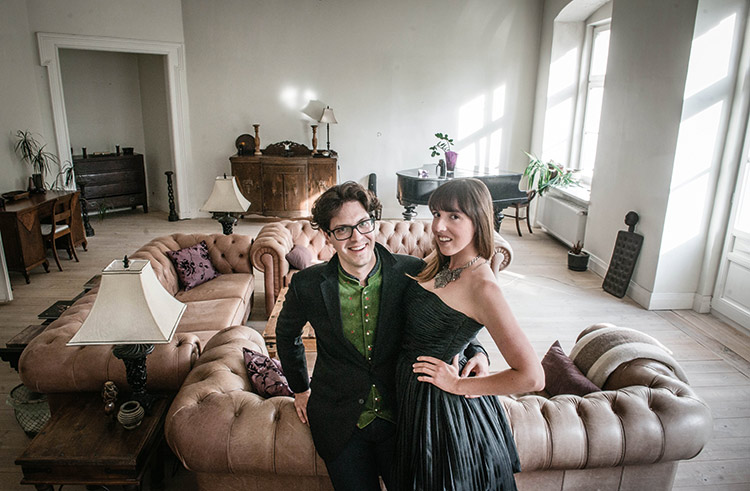 As usual, reaching our destination has been a complex affair riddled with calamities both major and minor: missed trains, wrong tickets and general confrontation with members of the public. Yet if our spirits are low, they lift immediately on our eventual arrival. Down a curling, wooded pathway, our cab deposits us to the doors of the castle.

Seen in a crisp autumn light, there’s a magical quality that instantly enchants. Perhaps sensing our relief at completing what most people would regard as a quite simple journey, we are intuitively handed craft beers by the castellan, Jamie, and when those are finished more swiftly follow. Soon, we’re ensconced on the terrace in a happy little bubble. Joined by Jamie, the evening passes in a gentle blur of meandering conversation.

The next day is signaled by shafts of sunlight streaming through the windows. I have slept well, enjoying the kind of dreams from which one emerges feeling bafflement and beauty. Waking, it’s in a mind frame that’s been comfortably distorted by this whirl of warmth. But rather than dissipate as the ugly challenges of life make themselves known, it’s a feeling that lingers and even grows stronger. Yes, I am staying in a castle, and yes, I really did sneak into my room via an upper floor window: I’m thrilled just to be here. 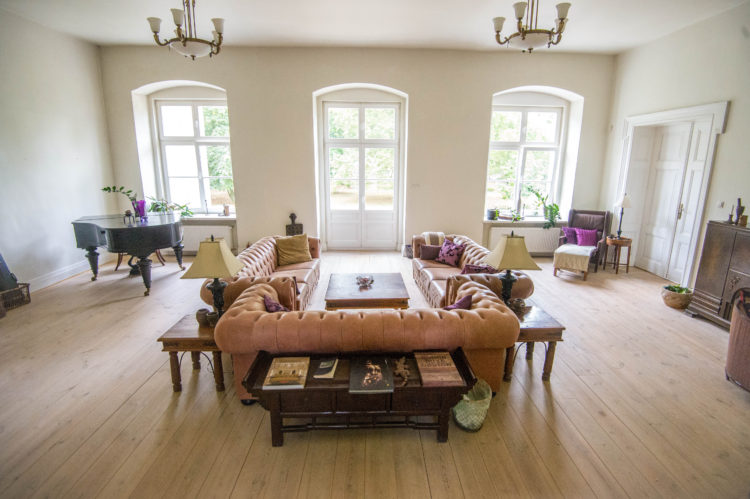 After the excesses of the previous night, there’s a need to refamiliarize myself with my room, and this I do with serious endeavor. Each named after the books and characters mentioned in the works of Ossowski, it’s in the Blumen für Magritte suite that I found myself now. Entered more conventionally by a private set of stairs leading from the basement (or, optionally and legitimately via a balcony window), it’s a charming space that channels the spirit of the author: opened as if to suggest I might have done some late night reading, one of her novels lies spread on the sofa. On the balcony, meanwhile, jazz albums are fanned out beneath a vintage vinyl record player. Satisfied with the state of my world, I soak in the bath watching cotton ball clouds drift past in the skies.

With my ablutions complete, I creak down the stairs and through the vaulted cellars. Shadowy as it is, even here positivity resounds. Allowed to hide out with the servants, it’s down in this basement that a pair of sisters destined for forced labor took refuge during wartime with the permission of the owners – of course, on hand to record the ensuing drama in one of her later works was Ossowski herself.
Emerging at ground level, I find that the photographer, too, has fared rather well (we learn, later, that the castle was built on a specially selected ‘high concentrated energy source’). 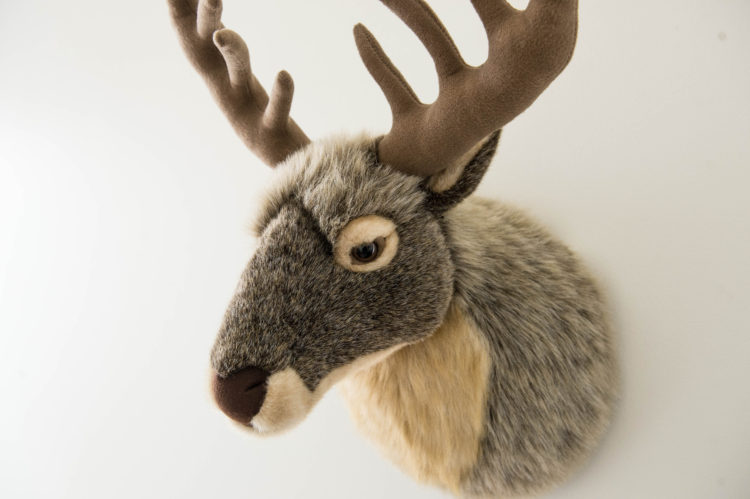 Meeting over a towering heap of breakfast goodies sourced from a local farm and a host of artisans, a plan is soon hatched and we set off to explore the guts of the complex. Revealing themselves in a dazzle of dove white colors and scrubbed wooden flooring, there’s a near celestial glow to the corridors and rooms. Each chamber we enter divulges new secrets: sepia images of former owners; hunting trophies made from cuddly toys; and little bits and pieces saved over from the past. Edging down a tight stairwell, I’m suddenly reminded I’ve been here before. 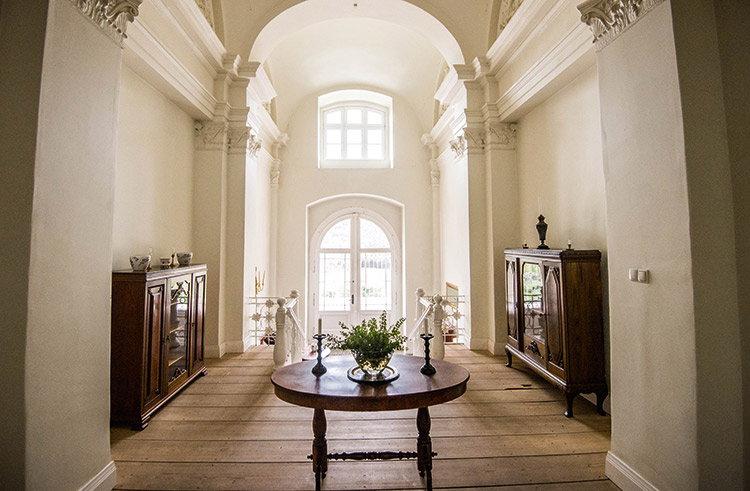 “Crikey, how the hell did I get down these last night?”

“You didn’t,” answers the photographer, “you fell.”

That the revival of the castle (or palace as the Poles class it) remains a work in progress only adds to the appeal. Traversing further than intended, we find ourselves in a grand ballroom, empty in anticipation of fall festivities. Seeing it like this, you appreciate the size, angles and forms, not to mention the care and attention that’s been vested in its renovation.

Strong as the temptation is to simply stay put and spend the rest of the day listening to the distant sounds of nature, to do so would be to overlook Wschowa. Lying three kilometers from Owowa Sień, it’s a strong candidate for the title of the greatest little town that you’ve never heard of. Offering an overload of quaintness, neither is it a shy of quirky distractions. 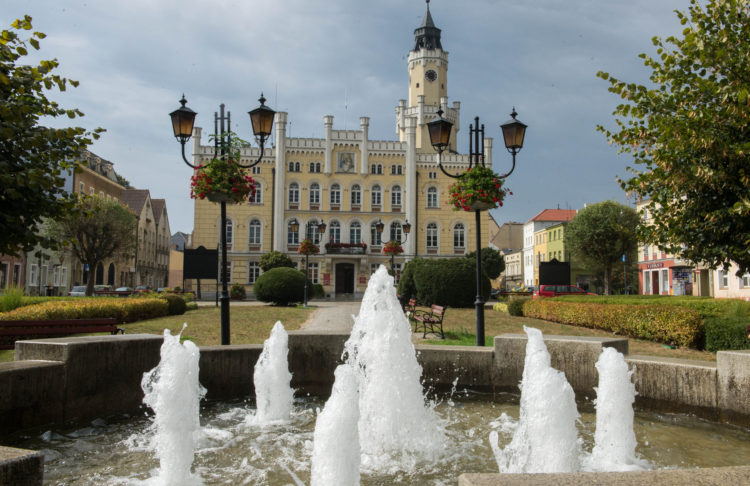 Dominated by a wedding cake of a town hall, it’s a place that unravels to betray a medley of oddities: having ticked off a Germanic era cemetery high on spooky Neo-Gothic detail, we visit a series of churches brimming with unfathomable minutiae – a relief, for instance, of a motorcycling priest. 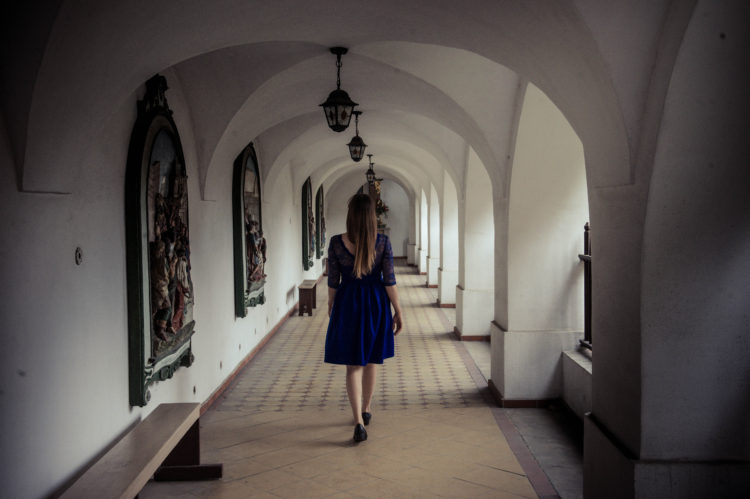 But with the weirdness soaked up, along comes the startling realization that we’ve been left high and dry. The only taxi driver has finished work for the day and answers our call with a threatening ‘nie’. Hitting the nuclear option, we ring the castle and plead for their help. 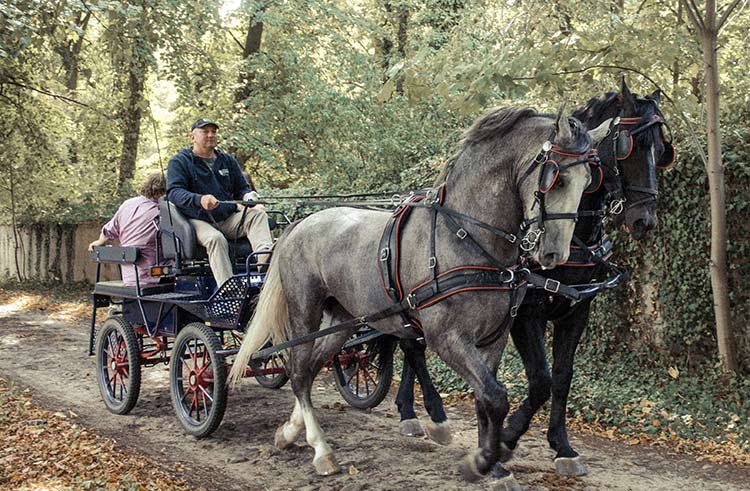 This shortly arrives in the shape of Jamie and Matt – on a horse-drawn carriage. Clip-clopping back in the style of landed gentry we pause only to take in one of Wschowa’s stranger glories: a statue of a bull. Built on a plinth that, prior to the region’s Polonization, had held a monument of Otto von Bismarck, the hefty concrete statue was added in 1982 to honor a breeding prototype introduced to the area eight years before. 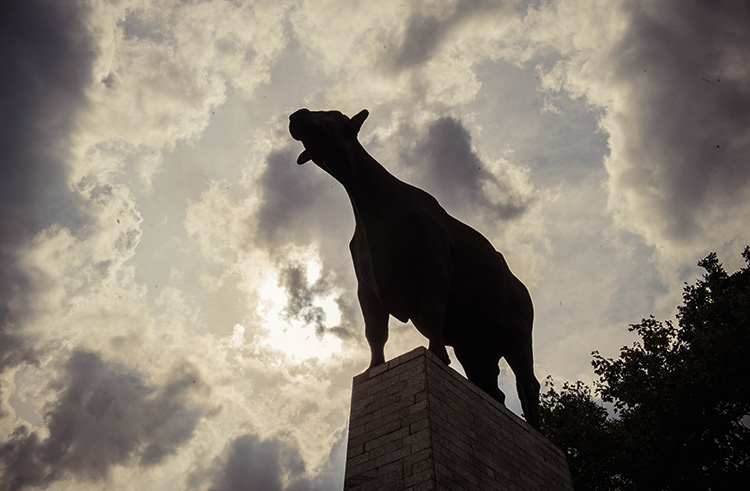 Mind you, this is not the last time we seek assistance from Jamie and Matt. With no restaurant on-site, and the photographer and I lacking in even the most rudimentary planning skills, we make the admission that we’ve hit the verge of starvation. No problem. Veterans of the Canadian version of Come Dine With Me, the couple whistle up a tiered platter of local goods cascading with local sausages and tapas, and invite us to a ceremonial dinner scheduled for the following day as part of the castle’s program of events. Dressing appropriately for the occasion, and fully recharged after a day spent lounging under whispering trees, we gather in evening dress for what transpires to be a night to remember. 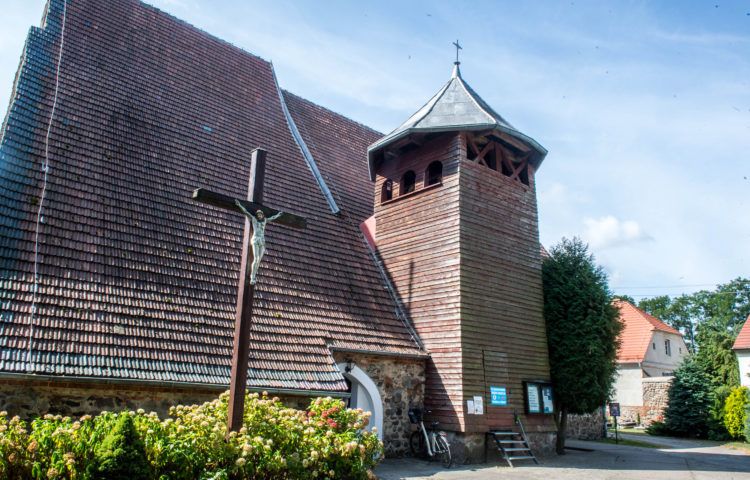 Matt feels to the manor born, a natural gentleman exuding effortless charm. Jamie, meanwhile, is a force of energy, each of her stories spidering into seven directions that take a life of their own. The effect is akin to being thrust onto the set of some scintillating sitcom: madcap, manic, mind-blowing. During a break in the bedlam the photographer puts it better: “like meeting with friends this is… in a castle.”
Heading outside, a fire is lit, drinks are fetched and more laughter ensues.

This should be the end, but instead it’s just the beginning. On the stroke of midnight we are led by lanternlight to the village church to pay due respects to the ‘good witch’ Julia. Born at the start of the 20th century, she overcame a variety of impairments to become a respected local herbalist whose power over animals became the subject of legend. Lighting a votive on her grave, we stop for a moment’s silence, a perfect crescent moon shining up above. Walking back to the beckoning warm glow of the castle, we do so in a mood of quiet contemplation. Strange things happen here, I think to myself. Strange, good things.

Need To Know
From Warsaw, you’re looking at a 420 kilometer drive east that should take approx. 4 hrs 30 mins. Otherwise, get a train to Leszno via Poznań, and follow it up with a zł. 100 cab. Suites start at zł. 250 per night rising to zł. 635. For further info, see: palacosowasien.com