Remember Praga? Not long back it was being touted as a center of cool and Warsaw’s answer to Williamsburg. Only it never quite happened. “Sod Praga,” you imagine the hipsters saying, “Powiśle is closer.” What had been billed as The Next Big Thing was suddenly left asking where the party had gone.

But while Praga never quite reached the heights that were forecast, it feels all the better for it. While Powiśle struggles with pretension and fakery, Warsaw’s right side retains a realness that’s both raw and authentic. It helps, as well, that not all the so-called creatives migrated out West. If proof of this was needed, then let Stalowa 52 be Exhibit A. Run as an ‘art hotel’, it’s an impressive project alright: bold, beautiful and not short of flair. But if the hotel passes muster, then what of its restaurant…

Whereabouts: awkward. Stalowa 52 is not an easy address to reach. I decided to get there by bus, a mistake that cost me about 40 minutes of life.

The Place: with their location in mind, I expected the restaurant to be empty. More so considering I was visiting on a Wednesday afternoon. But lo, it was packed: families, fashionistas, travelers, locals and even some people lugging camera equipment about. If that’s a Wednesday afternoon, what’s Friday night like?

Design: as you expect, it’s a charmer. I passed the chance to eat in the first room, instead opting for a narrow dining chamber with vaulted brick walls, daffodils and lots of white, formica fittings. On a brighter day the courtyard, strewn with deckchairs and crates, looks a must.

The Service: for a place that clearly oozes with charisma, I was disappointed that the staff do not. Sure they’re efficient, but this is the kind of place that calls for some big characters looking after the tables. I want confidence, conversation and maybe some suggestions: instead, I’m left communicating to a mute. 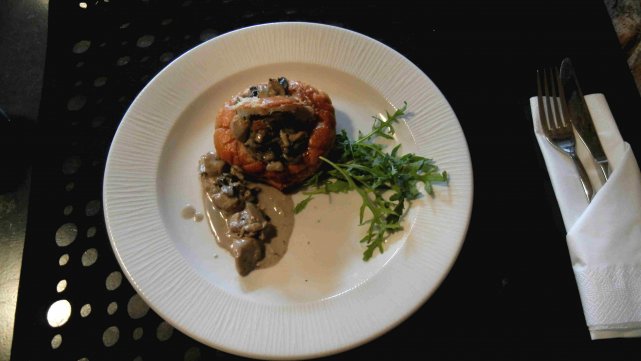 Starters: chicken vol-au-vent with mushroom sauce. I’m instantly disappointed. The pastry shell is too dry while the mushroom sauce adds nothing to the taste. It’s possible I’ve hit them on a bad day, but this is a dish that transpires to have the taste and texture of paper.

Mains: now we’re talking. I’ve ordered the duck breast, and what I receive is the definition of excellence. The skin is carefully crisped, while the meat is tender, pink and with a perfect hint of fat – not much, but just enough. Alongside it are gorgeously browned potatoes that I’d happily eat twice. The sauce is tricky – orange and caramel – a combination that in the wrong hands is rich and overwhelming, but here it’s executed well. This is a dish of considerable greatness. 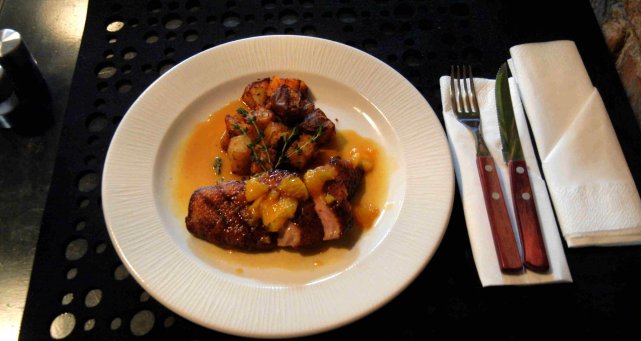 Dessert: a pot of chocolate ‘cream’ with a side of raspberry sauce. Alas, it sounds better than it tastes. The chocolate is runny and I’m left questioning how a dessert of this caliber can be so bland and deflating. 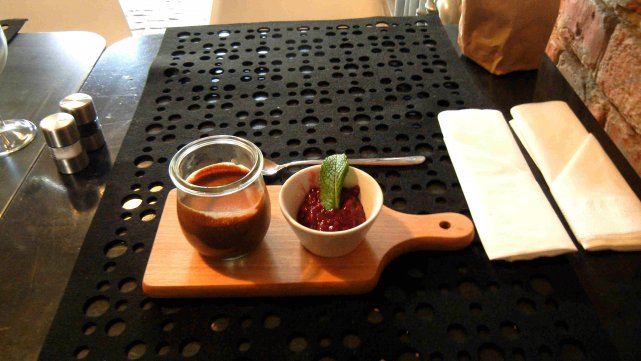 Other: there is one thing I hate more than receiving a panicky text message saying, “check email NOW”. You know what that one thing is? Finding the internet connection is buggered… Grrr.

Overall: a mixed experience that’s left me quite puzzled. There are highs, there are lows and a few in-betweens. But this remains a place of great potential. What they get wrong is easily fixed, while what they get right is very right indeed. I’m going to watch this place with interest, because I imagine by the end of the summer it’ll be great to revisit.