It’s been a while since I was in Der Elefant and, in all honesty, I didn’t think it’d be returning anytime soon – not because I disliked my last couple of visits the other year, but simply because of the wealth of better restaurants in Warsaw. The thing is, I keep hearing about it, in particularly from a friend whose started eating their Alaskan crab claws with something approaching religious zeal: “the best in Warsaw,” he says, “and cheap, as well.”

As it happened I was passing it the other day and on the spur of the moment though, well, why ever not. Now two things struck me immediately, one, you can now smoke in the courtyard, and secondly, the staff have dispensed of the painful five minute introduction they used to have to give. These are good things. Other things, however have remained constant: their refusal to accept credit cards, and their astonishing popularity. I popped in there for a late Thursday lunch and the place was packed. 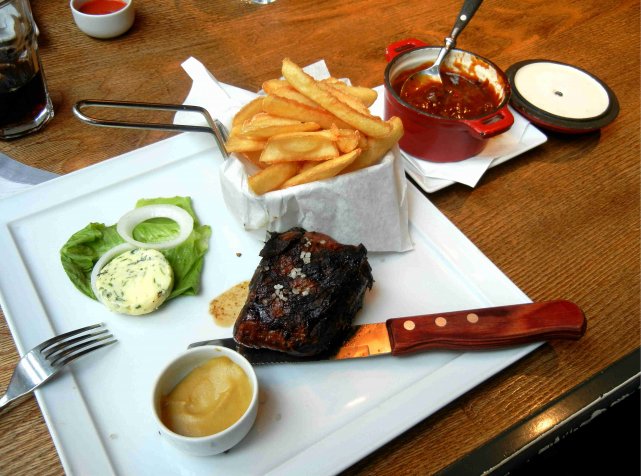 Deservedly so – I didn’t bother with the crab claws I’ve heard so much about, but instead went for the filet mignon. Priced at zł. 59, I can truthfully say it competes with the top steakhouses in Warsaw. The meat was good, and ably cooked: a nice medium rare and a reassuring sear on the outside. The portion was hefty, and the accompanying chips crisp and chunky. And, finally, well-supported by a house barbecue sauce that comes served in a pot and involves such things as red pepper and lemon peel. Amazing.

When I visited last year there were things I found vaguely irritating about Der Elefant – the ‘bit of everything’ menu, the sheer popularity, not to mention its formulaic approach. All are still evidenced, but I don’t really care. That steak was the best value cow I’ve had for a while – this is not the last Der Elefant see of me.