asian52 bao2 bar300 cocktails113 dim sum6 drinks334 japanese51 sushi34 Vietnamese15
Fokim does what other bars daren’t. I mean, where else can you go to the toilet and find a scantily-clad Korean girl jiggling about...

Fokim does what other bars daren’t. I mean, where else can you go to the toilet and find a scantily-clad Korean girl jiggling about in a titillating manner? Okay, so she’s on an LCD screen, but nevertheless, it’s a bold design statement that sets the tone nicely. Yet as easy as it is to spend the rest of the night locked in the cubicle with her, by doing so you risk missing the real fun – that’s found around the bar, a well devised space that feels punchy and buoyant: ‘eat, drink, dance, riot,’ urges a Malibu pink neon attached to a wall sheathed in spatial wood panels.

Grupa Warszawa, the cadre behind Fokim, are not new to the bar game. Founded in 2008, they’ve redefined the city’s nightscape with a string of successes such as Weles and Zorza. Further, they’ve achieved this by shunning the temptation to ‘copy and paste’. Each venture has its own distinct personality, with their latest hit, Fokim, being openly portrayed as ‘the naughty child’ of the team’s portfolio. “Our life is all fun and no rules,” shouts their website, “rebellion is our style.” 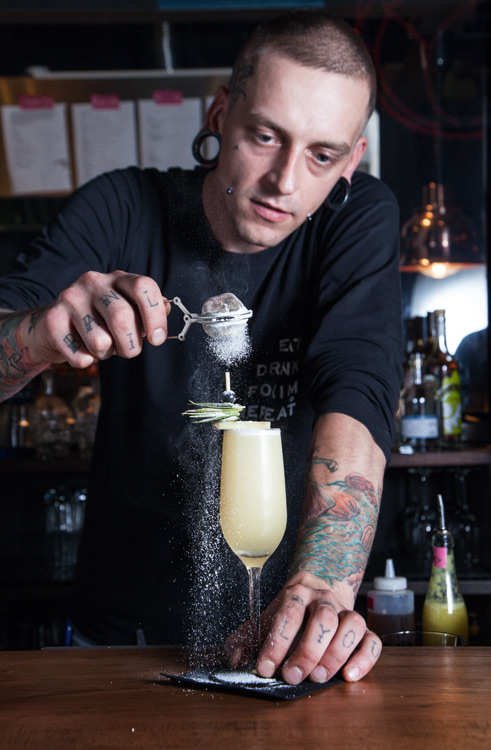 True to their word, we turn up to find a wild night in full swing. It’s Thursday evening, not even that late, but the place is jumping with glittery girls and gregarious guys. “Oh yeah,” says the photographer, “that’s so and so from the TV.” With the party spilling outside, there’s a fizz and crackle to the atmosphere that’s hard to ignore. Keeping it pulsating, tattooed bar staff work double-time to keep the horde happy. There’s shots with names such as Karate Kid and Dragon Ball, and elaborate cocktails like One Night in Saigon. Keeping me fired-up is the Marry Me: Jagermeister mixed with Big Tom tomato juice and a lively dollop of mustard seeds and horseradish. Don’t think of it as a Bloody Mary, think of it as something better.

There’s food, as well, and we make a concerted assault on the pan-Asian menu: immaculate sushi and kimchi salad that’s all tang and zip; elsewhere, a taste of Saigon street life courtesy of loaded Banh Mi baguettes and fluffy steamed buns packed with Peking duck and lashings of Hoi Sin sauce. It’s a fresh and frisky offer in tune with the drinks, the surrounds and the people themselves. In a nutshell, it’s a dynamite demonstration of Warsaw’s new swagger. (AW)