My story with Muu Muu goes thus: visited last summer, probably about a week after they opened, and enjoyed it so much I went back there a few hours later, only this time with the Mrs. By the time we’d settled the bill we were both in agreement that this was a place we both loved. What happened next? Nothing. Didn’t go back again, didn’t think about it again – and the fault of that is Warsaw’s: there’s just too many new launches to keep me from returning to places I like. Anyway, finally, I managed to rectify that last week… 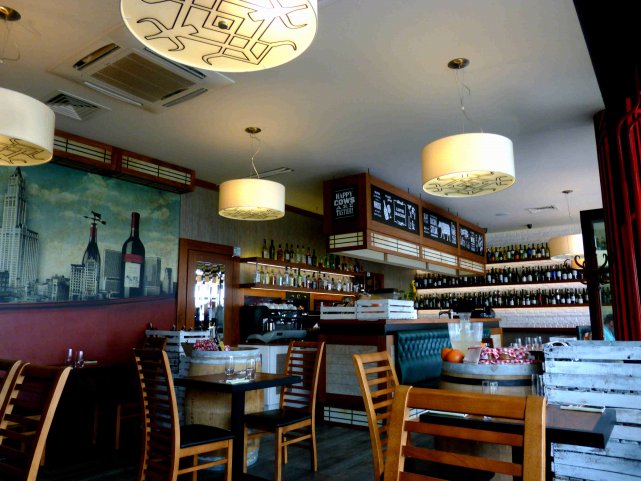 The Place: the first thing I like about Muu Muu is the design. It’s not typical of your standard steakhouse – dark, gloomy and formal it is not. Outside, a plastic cow hangs around with a menu chained around his neck, while inside it’s full of light and airy touches and soft woodsy finishes. And, to emphasize the point that you’re in something of a meat market, blackboard slogans impart such wisdom as: ‘happy cows are tastier’.

The Menu: vegetarians, turn back. It’s meat, meat, and more meat, with approx. seven steaks plus some duck and lamb on their offer.

Starters: I was there on one of those days where you break sweat just walking two yards. So, the gazpacho was a good choice. Very good, to be frank. Chilled, zingy and refreshing, it was made all the better for the addition of a couple of peels of apple – was this Muu Muu’s way of showing solidarity with the anti-Putin apple movement, or just the bright idea of the chef round the back? No idea, but either way, it adds an extra twist to a very nice soup. 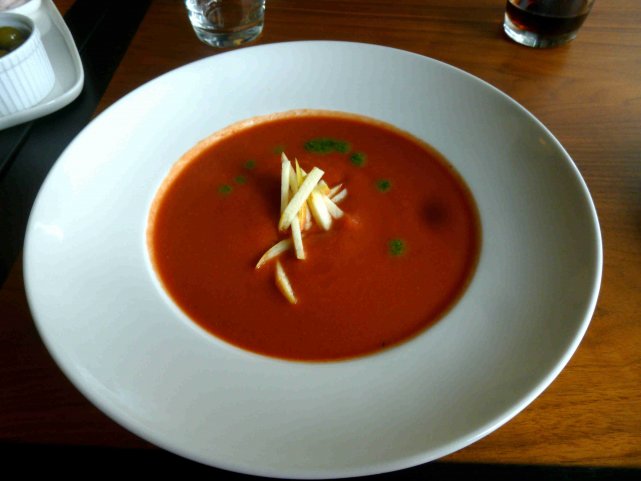 Main: sirloin using Limousin beef. Cooked bang to order, medium rare, with a nice sear on the outside this was a seriously good piece of cow. The green pepper sauce wasn’t needed for the meat, but it was for the chips which turned out to be limp, soggy strips that dampened what was otherwise a very good main. And to think, you pay 10 zlots extra for them… 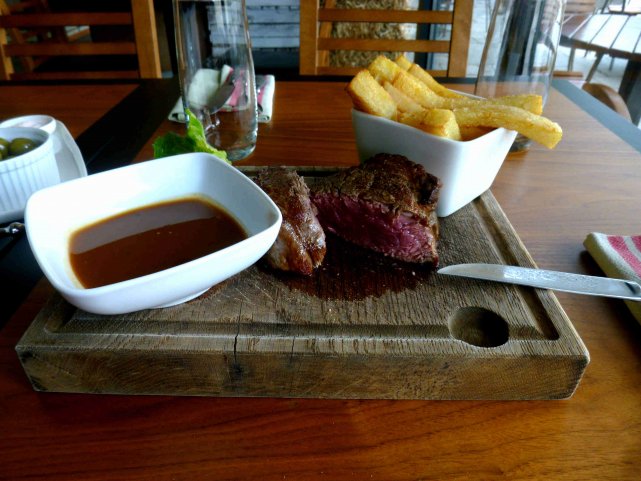 Dessert: vanilla cheesecake coated, Magnum-style, in chocolate and served with a sprinkle of seasonal fruits and a swirl of cherry sauce. Rich and decadent, this would have been in my Top 5 desserts of 2014 were it not for one thing: it’s too bloody big. Flavors this deep and overwhelming require moderate portions. 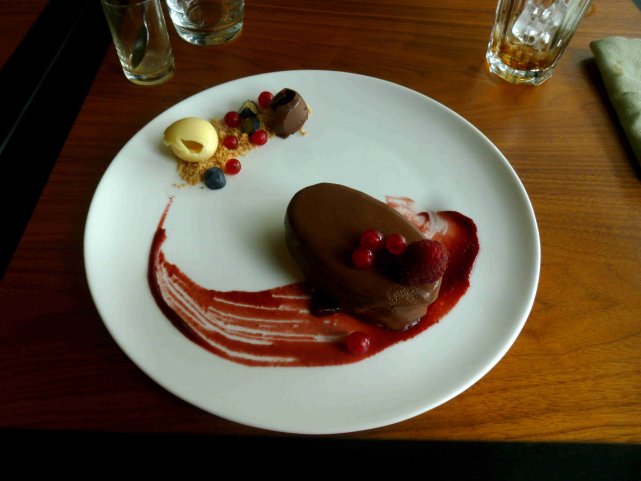 Price: so, where are we, 20 for the starter, 95 for the main (including 10 for the chips), and 21 for dessert. It sounds steep, but that’s pretty much Warsaw average for a good chop of cow.

Overall: I’d certainly recommend Muu Muu to anyone looking for good steak. True, I’ve had better this year – namely in Hoża, Salto and Solec 44 – but that’s not a slight on the quality in Muu Muu. I’ll be back, and next time I won’t wait a year.