Built on the rubble of the Ghetto, the Muranów housing scheme is often perceived as a dull obituary to Poland’s communist nightmare. But leaps have been made to humanize the area, to add color and life to its bleak, somber blocks, and these efforts best manifest themselves in the murals that have bloomed on the walls and archways of this Orwellian estate… 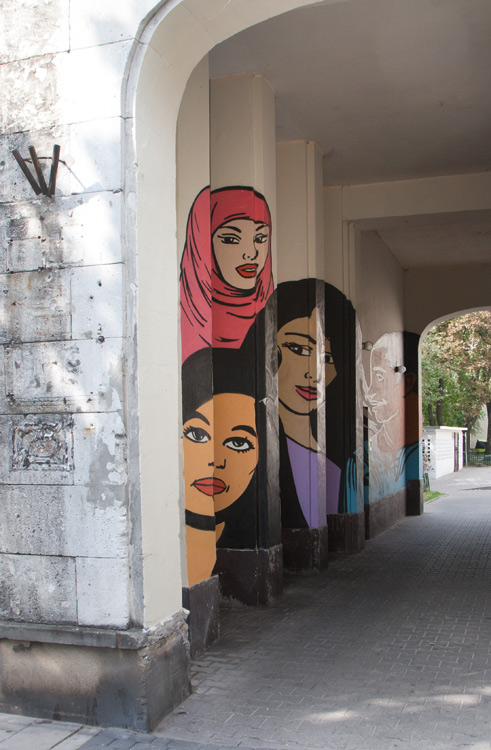 (1) The Immigrants
ul. Nowolipki 2A
Unveiled in June of this year, The Immigrants aims to promote ‘inter-cultural dialogue’ and show the city as a crossroads of culture and differing beliefs – that’s juxtaposed against the moronic football / far right graffiti that appears in the vicinity from time to time. 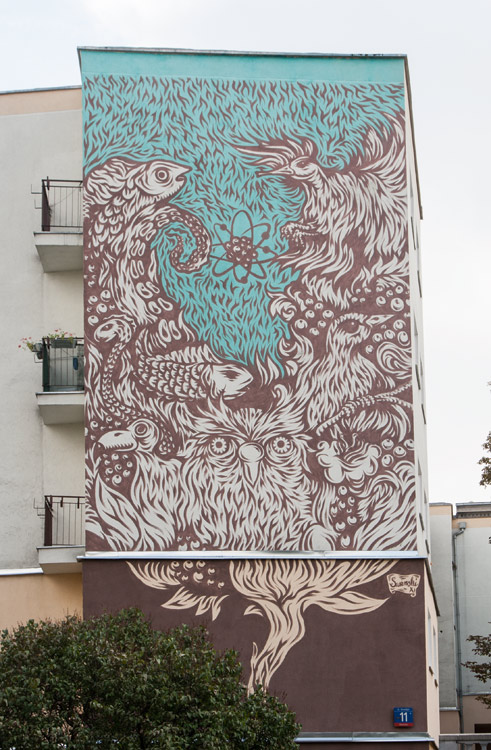 (2) Atom
ul. Nowolipki 11
Weird. Marie Curie-Skłodowska was raised nearby, and her scientific achievements are remembered by way of a lairy mural that clumsily demonstrates the forces of the universe. What you’re looking at, apparently, is the tree of life. 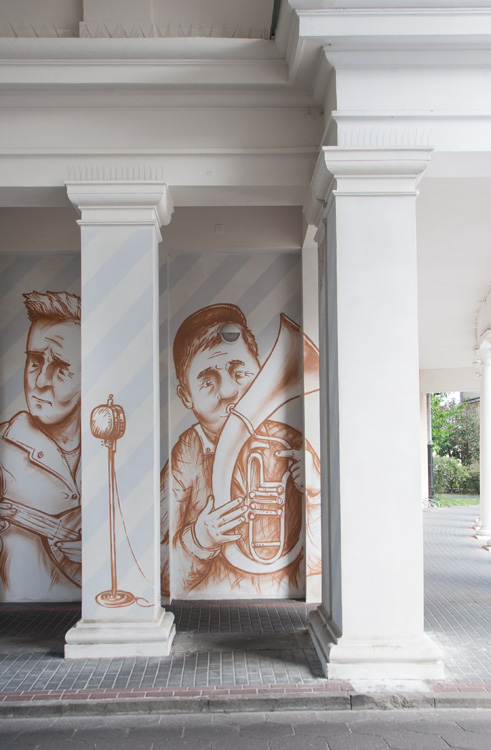 (3) Musicians
ul. Nowolipki 9B
Honoring the street musicians who once prowled the streets of Warsaw, the finer details of this artwork include banknotes fluttering in the wind: they’re a reference to the spare change locals would drop out of the windows to the buskers below. 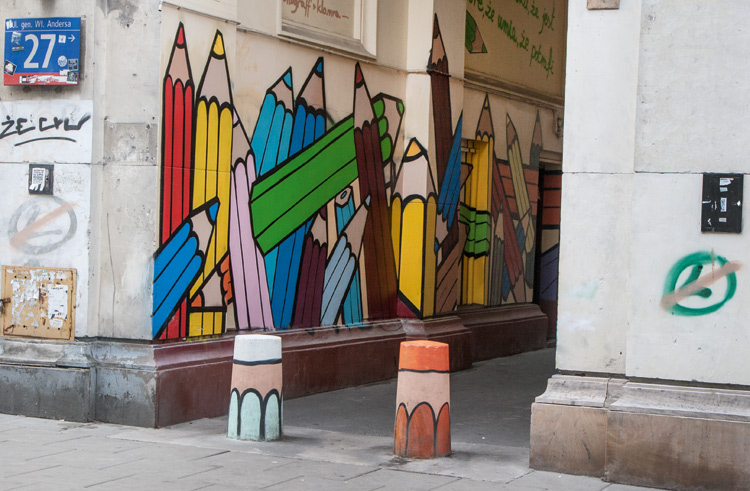 (4) Pencils
ul. Gen. Andersa 27
Dedicated to Janusz Korczak, a Polish-Jewish pediatrician and educator who was gassed in Treblinka along with the orphans in his care. Recently restored after being attacked by vandals, the mural contains many of Korczak’s musings: for instance, “When a child laughs, so does the whole world.” 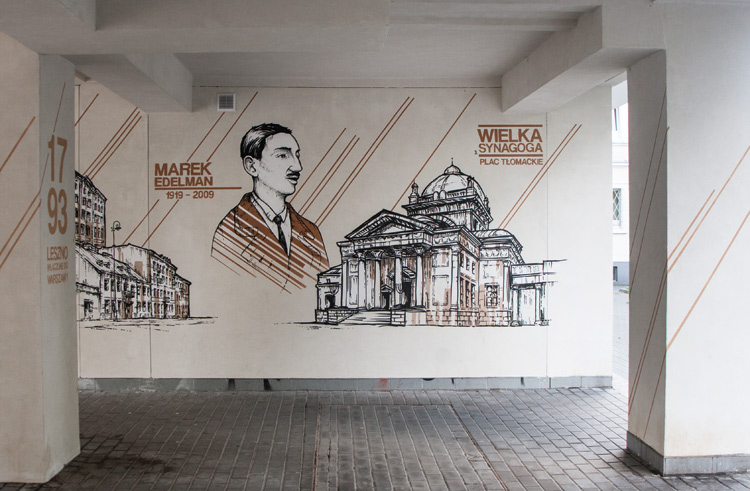 (5) Dawne Leszno
Al. Solidarności 78
The pre-war past, when this street was known as Leszno, comes alive in a spate of pictures that depict different episodes from its history. The old Femina theater, the Great Synagogue and the busy Pasażu Simonsa are all presented, as well as characters from the Ghetto such as Marek Edelman. 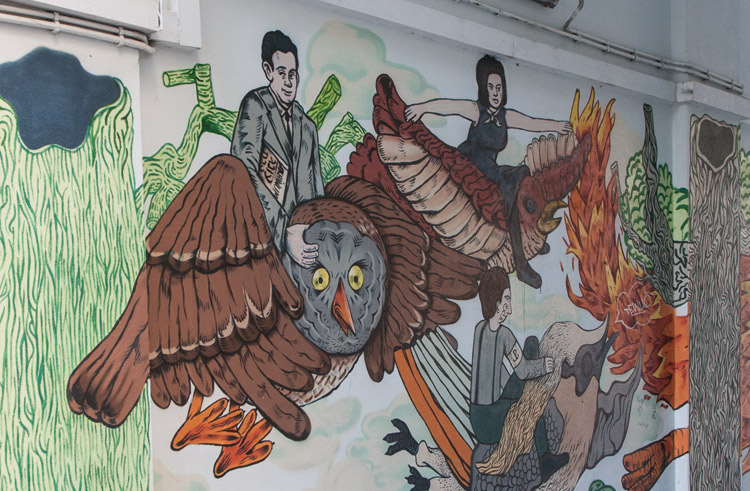 (6) People of Solidarności
Al. Jana Pawła 44
The most surreal mural of the lot, People of Solidarności lauds not just the everyday local, but neighborhood heroes like singer Marysia Ajzensztadt (a.k.a ‘the Nightingale of the Ghetto’) and Bohdan Lachert – Muranów’s post-war architect. Find them flying on the wings of owls, storks, phoenixes… 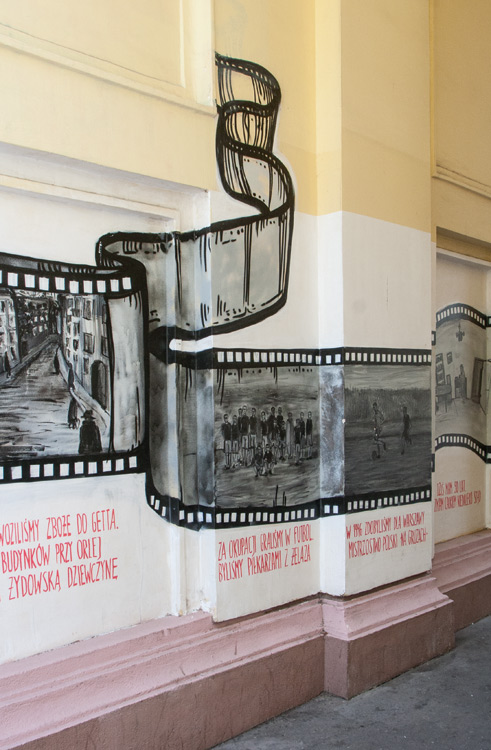 (7) Memories of Sosnowski
ul. Gen. Andersa 31
Born locally in 1924, footballer Zdzisław Sosnowski is a legendary figure amongst supporters of Polonia Warszawa. Styled like a film reel, this mural tells the story of his life, including Polonia’s emotional league title triumph in 1946. Deemed by the critics to be too dark and miserable, it had been slated for removal – the locals said NO! 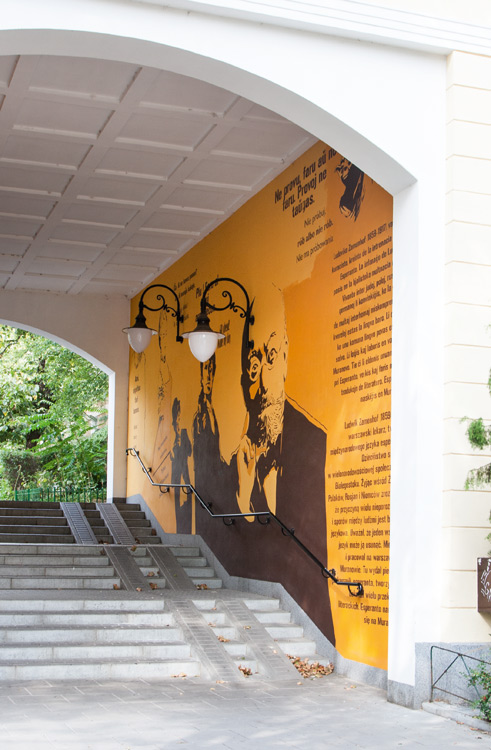 (8) Zamenhof
ul. Nowolipki 4
Ludwik Zamenhof, creator of the Esperanto language, spent much of his life in the area, and this jolly mural features a brief biography of the man. His wise, global outlook is celebrated by a quirky collection of characters that include Yoda, Einstein, and that donkey from Shrek, not to mention their definitive catchphrases translated into the lingo. 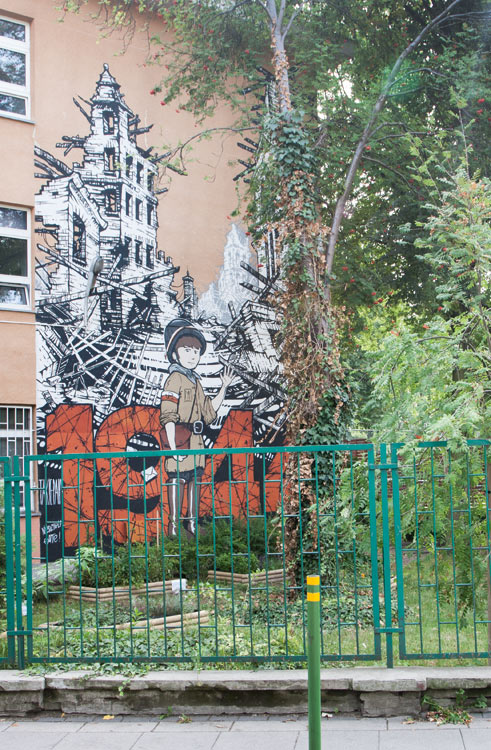 (9) ’44 Little Insurgent
ul. Lewartowskiego 2
Whacked onto the side of a primary school, this impressive piece of wall art commemorates the children who partook in the 1944 Warsaw Uprising. The ruins of the city stand in the background. 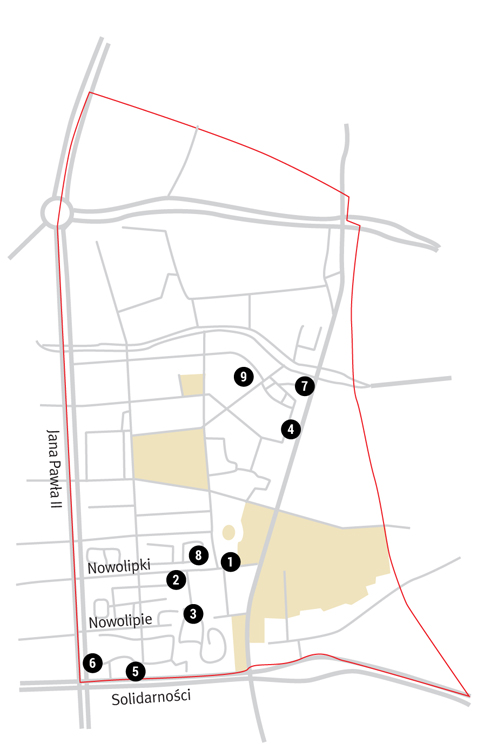