I was a little wary of entering Patera, wary as there’s something of an ugly, ongoing thread on one of the more high profile ex-pat forums concerning one foreigner being overcharged on the lunch deal (“and when I complained on their Facebook,” continues Mr. X, “they deleted my comment,” or words to that effect). So yes, trepidation would be the right word when describing my visit. In the event, however, I’m now safely back on my sofa with wallet intact and zero calamities to report. On the contrary, in fact…

The Place: likeable. The center pin is a semi-circular bar, above which lamps hang from a ceiling made out of old Coca-Cola crates. There’s palm fronds, mismatching seats, cheerful colors, exposed pipes and industrial chains. Sacks of Haruka rice adorn one end, and on the other there’s floor-to-ceiling windows which, at this point in time, reveal grandstand views of construction work – yep, that damned second metro line. But overall, it’s a fun and funky space that’s light, bright and sufficiently quirky to prickle your attention. 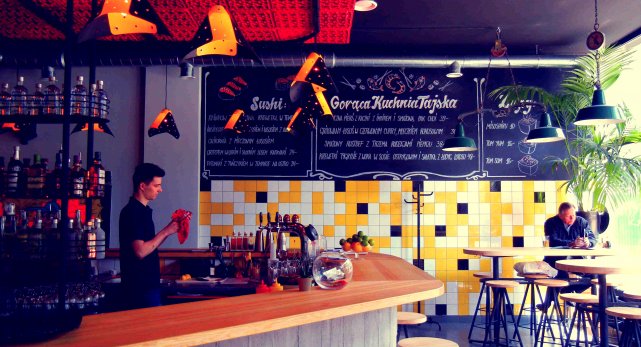 The Location: this side of Świętokrzyska was once something of a kebab junction. But as work on the second metro line puffs to its conclusion, we’re seeing places of higher pedigree replace the old cut-price shacks. A fair swap I reckon.

The People: I visited mid-afternoon and found a steady stream of varying characters: a beautiful blond pecking on sushi, blokes in suits taking a late lunch, and an old bloke nursing a lager and the weight of the world’s problems squarely on his shoulders. The proximity of Warsaw’s teetering office towers means there’s a heavy leaning towards the business end of the spectrum, but their audience goes beyond that.

The Staff: this was the potential problem I’d been warned about, so it’s only fair to say I’ve no problems to report – three on duty on my visit, including a coquettish waitress, a confident barman, and a sushi chopper dressed up like The Karate Kid. All three were warm and welcoming, and none tried any sneaky tricks on either me or my bill. So yeah, let’s put that rumor to bed where it belongs.

The Menu: no English menu available, but it’s pretty easy to muddle through their offer. The onus is on sushi (including such innovations as ‘inside out Californian’) and a small selection of Thai.

The Food: I chose the Thai side, namely fried beef served with three types of black pepper. The portion is generous, with lots of pleasing punchy tastes, sticky rice, and a deep and aromatic sauce. I’m happy with it, and my only complaint is that without a table mat the plate slipes and slides like an elephant on ice skates. For dessert, it’s green tea ice cream served in a tall glass and accompanied by a subtle strawberry sauce, a sprig of mint and some fresh orange slices. It’s both cleansing and delicious, and I have no problem in endorsing it as such. I’m keen to try the sushi, but before that I’d like to return to try their other Thai dishes: in particular, the duck breast with ginger sounds right up my street. 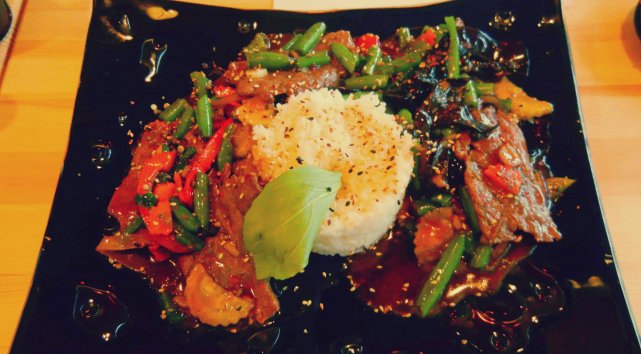 The Drinks: but there is also another string to Patera’s bow, and that’s the cocktail menu. There’s lots of classics with a few modern twists. It might be Monday afternoon, but that’s not going to stop me. I start with the Mango Chili Sour (Absolut, mango chili syrup, egg white, bitter orange), before moving onto the Havana Highball (Havana Club rum, Triple sec, sour, Angostura and ginger beer). Both are smooth, sophisticated and refreshing. But the best is saved to last: the Ginger Peach Collins. Now this is a marvel, a sexy drink that slips down like nectar. And, what I really like about all three, is that they’re fixed in a way that appreciates aesthetics while never sacrificing practicality. I’ve had enough of being served complex cocktails that are impossible to drink through all the ice and fruit arrangements – that’s not a problem here, the drinks are so designed you can actually drink them. And for the non-boozers (shame on you), there’s 14 green teas, fresh fruit concoctions and such like.

Price: for one main, a dessert and three cocktails I paid out zł. 115 excluding tip. That’s a fair deal.

Overall: any initial misgivings I may have had have been put to the pyre. But Patera’s more than a pleasant surprise, it’s a highly decent eatery with drinks of real note – I’ll be returning and look forward to doing so.